Across its twenty year history, Strategic Command has explored a diverse range of battlefields, with campaigns ranging from the mountains of East Africa, to the islands of the Pacific, to the frozen plains of Russia. Thus far however, the series has never included a campaign set in South America (with the exception of the continent playing a minor role in WWII: World at War, of course).

The late 19th century was a defining time in South America’s history: mere decades after declaring independence from Spain and Portugal, the continent’s new nations came into frequent conflict as they battled for control of South America’s future. To complete the Wars in the Americas expansion, we have included campaigns exploring two South American conflicts that we found to be particularly interesting: the Paraguayan War, and the War of the Pacific. 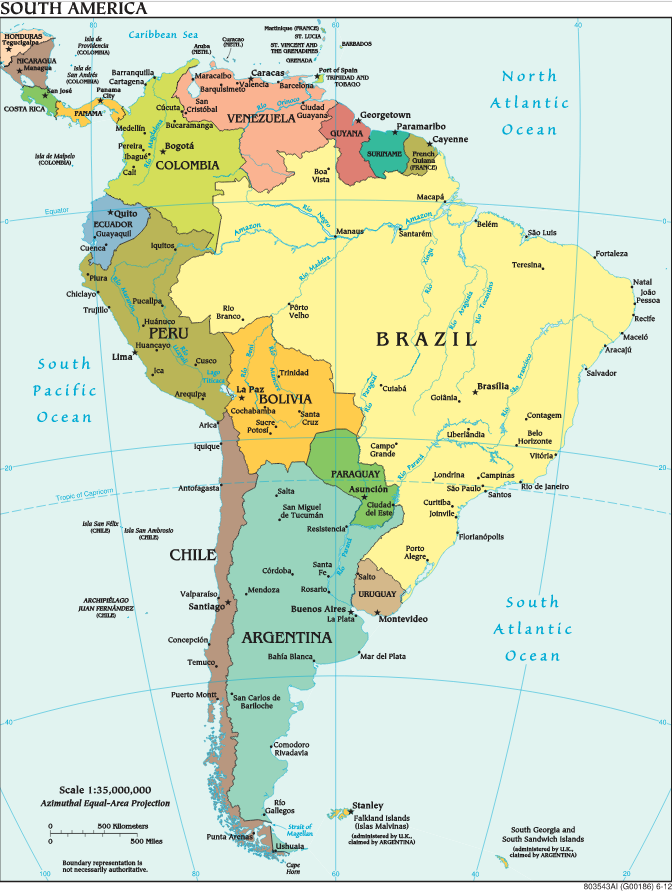 South America’s today.  In the 1860s, many of these borders were unmarked and heavily disputed.

Many fortifications have been compared to the mighty walls of Gibraltar: Metz, Sevastopol, Vicksburg and Callao among others, but few have been so deserving of the title as Humaita. Situated just north of the Argentine border, Humaita controlled the sole accessible route into Paraguay. The fortress itself was at the top of some steep cliffs on the left bank of the Paraguay River looking over a horseshoe bend in the river: any approaching vessels would have to contend not only with Humaita’s guns but also the rushing current. On land it was surrounded by swamps, lagoons and mudflats – the trackless, unmapped carrizal – creating a position thought to be impregnable. Indeed it was so strong a position that in 1864 Paraguay’s Marshal-President Francisco Solano Lopez felt confident in abandoning half a century of strict Paraguayan non-intervention to embark on a war with Brazil and Argentina, setting the stage for one of history’s greatest sieges. 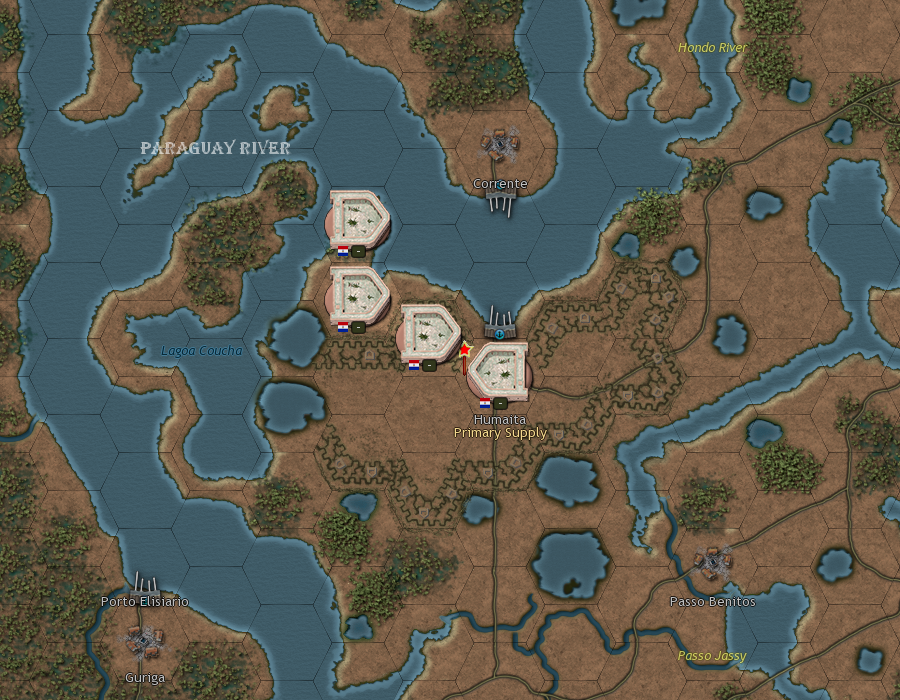 By May 1866, the point at which this campaign begins, the Paraguayan War was eighteen months old. Most of Lopez’ professional army had been destroyed or captured, and whatever unlikely prospect he might have had to convincingly win the war by marching on Buenos Aires had long passed. What remained was a small, badly outgunned force (while the Brazilians had modern rifles, Lopez’ men were equipped mostly with Brown Bess muskets dating back to the previous century), but one whose determination bordered on the fanatic. 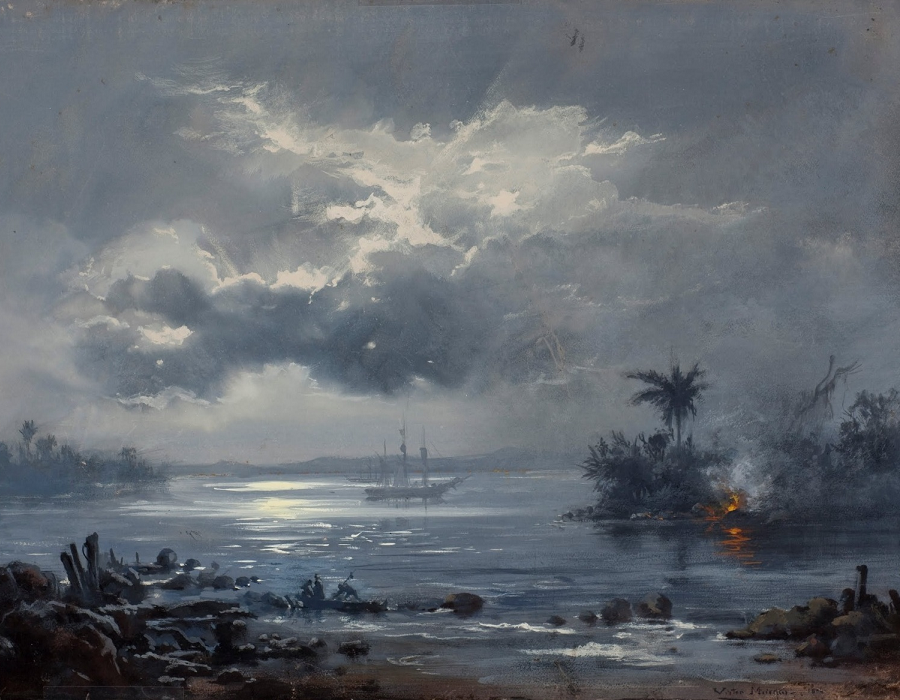 Paraguay therefore possesses several advantages despite their desperate position. Most notably, Paraguayan infantry can build fortifications (and do this much more quickly than engineers in other campaigns), and doing so is frequently a matter of survival in face of a greatly superior foe. The geography of the area also greatly favours the defensive, as it is filled with endless swamps, lagoons and smaller streams, each of which can be utilised to make a stronger position. Furthermore, as the region has never been mapped, the Paraguayans know the geography of the land far better than their opponents, which we have represented by giving their infantry an additional hex of spotting range. 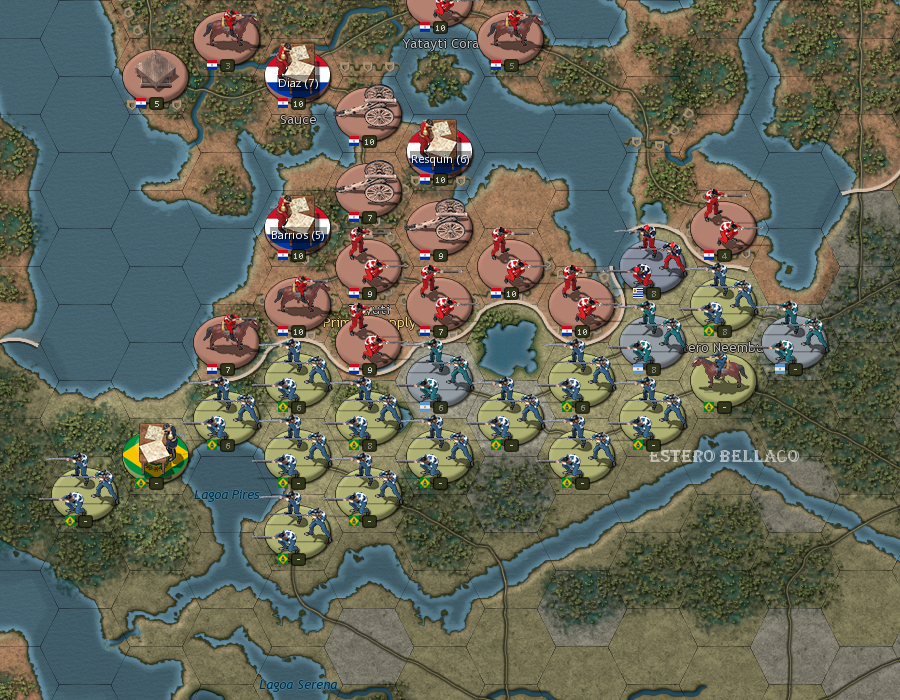 The Triple Alliance – Brazil, Argentina and Uruguay – make up for this with a very powerful advantage of their own: all Allied infantry receive a minimum supply of 3, making it impossible for them to be cut off and destroyed for lack of supply. Historically, Paraguay’s power projection capabilities by this point in the war had become virtually non-existent, and their armies too small (and themselves too poorly supplied), to enforce an effective encirclement. On a map where each hex represents less than half a kilometre, the Allies will be able to fight wherever they can get their forces. 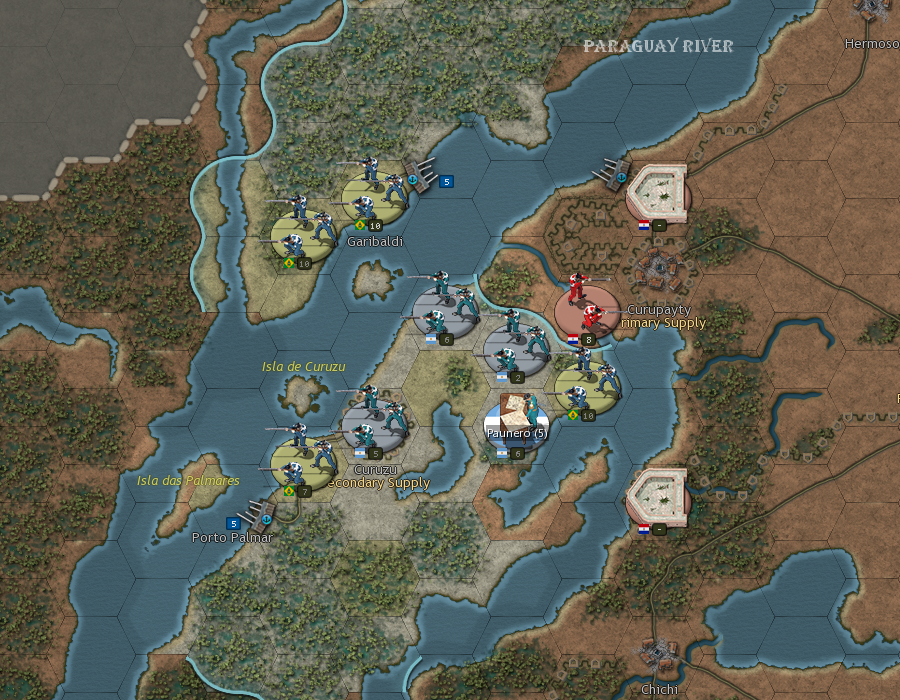 In order to achieve victory in this war, you will need to take full advantage of your side’s unique abilities, while preventing your opponent from doing the same. 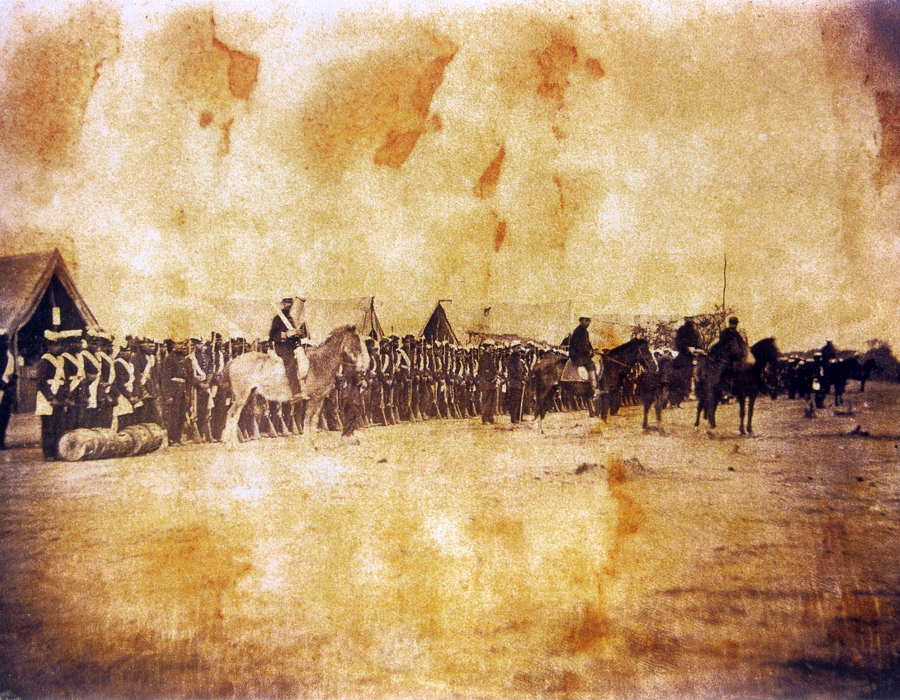 From a war where the two sides could not have been more different, we now look at one where they could not be more evenly matched. In the War of the Pacific (no, not the conflict between Japan and the United States!), Chile and Peru both had starting armies of around 5,000 men, two ironclads, long coastlines and virtually no logistics or medical units supporting their forces. Chile had a small technological advantage, but Peru made up for this with its greater manpower pool, as well as assistance from its ally Bolivia. 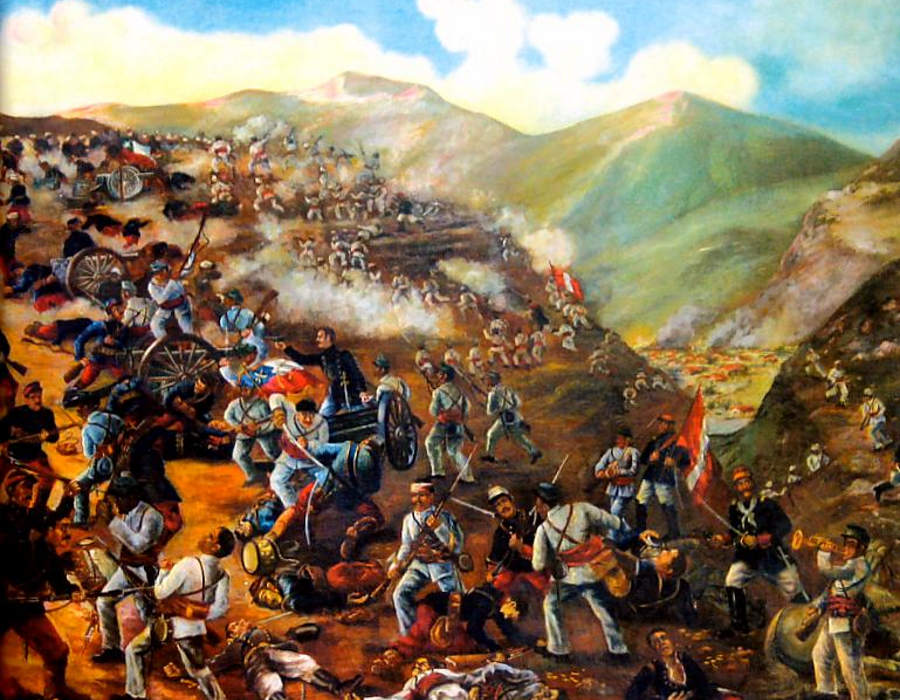 For two sides so evenly matched then, why did Chile win almost every engagement in this war, and eventually occupy Lima in 1881?

To answer that, we will be flipping conventional strategy on its head for this campaign. Typically, control of land is a prerequisite for control of the sea: in the Civil War, it is control of ports such as Cape Hatteras, Port Royal and Fort Pickens that enable the Union to blockade the Confederacy; in World War II it is the occupation of France that enables U-boats to raid the British convoys, and control of Pacific islands that enables aircraft to locate and bomb enemy warships.

In the War of the Pacific however, it is control of the sea that is a prerequisite for control of the land. Chile, Bolivia and Peru were heavily reliant on the export of minerals: principally copper, silver and nitrates, in order to run their economies, and as neither had much in the way of domestic arms production, imports were vital to sustain their war efforts. Limited infrastructure and difficult terrain in the Atacama Desert also prevent supplies from reaching your troops via an overland route, making control of the seas essential for success on land in a more direct sense as well (the game is more forgiving than history was, with overland supply being possible, if less effective, in the event that a forward position is placed under blockade). 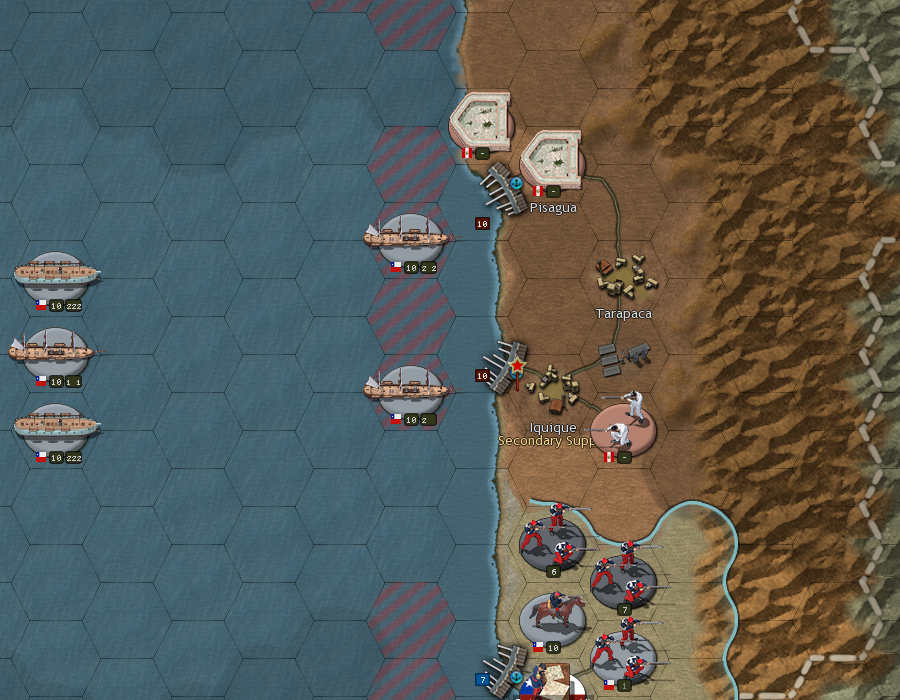 A more concise answer to the question of Chile’s victory can be given in one word: Independencia. This was the name of one of Peru’s two ironclads (or four, if we count two ageing monitors), which ran aground a mere three months after the beginning of the war, depriving Peru of perhaps its most valuable naval asset. As the loss of this ship was the result of a dreadful accident and keeping Independencia in the fight gives a more balanced experience, unmarked reefs will play no part in the campaign. It is therefore likely that the duels between Independencia and Huascar on the Peruvian side, and Blanco Encalada and Almirante Cochrane on the Chilean, will play a key part in your strategy – at least initially. 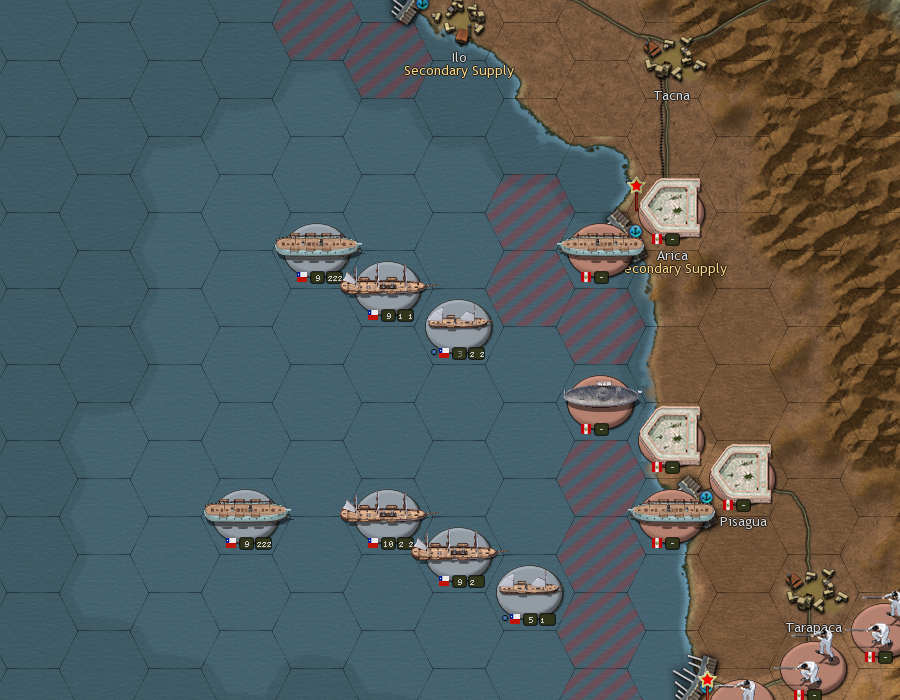 The War of the Pacific also marked the effective battlefield debut for two innovations that played a major role in warfare during the following decades. The first is the torpedo boat, which although smaller and less well armoured than an ironclad, is a fast vessel capable of dealing significant damage to enemy ships (something the Russian Navy would learn to its great cost 25 years later), as well as being ideal for enforcing a blockade of South America’s long Pacific coast. The other is the modern landing craft, first used at Pisagua in November 1879: if transporting supplies across the Atacama is merely extremely difficult, marching an army overland will be doubly so, while amphibious operations will give you even more ways to haunt your opponents. 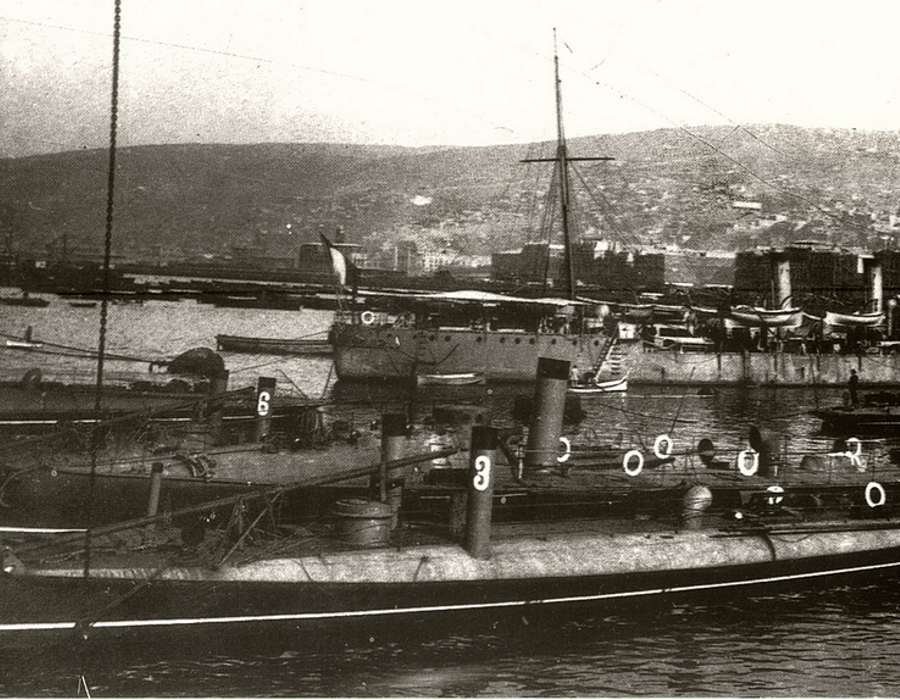 That wraps up our series of Dev Diaries, and we hope you enjoyed this first look at the Wars in the Americas expansion.  As always, thanks for your comments and suggestions, and for helping us continue to improve the series!

The Wars in the Americas expansion to Strategic Command: American Civil War will be available for purchase on Thursday 26th January 2023.

Keep in touch with the community of Strategic Command, use the forum to discuss your discoveries with other users, check out the site for FaQ and any information, and join the Discord server where the Dev regularly updates the users about the development progress and discusses requests and changes.