Command: Modern Operations starts the engines. Out on November 14th

You heard it right. Command: Modern Operations has entered its final phases of internal testing and developers are ready to reveal the release date. The most comprehensive and realistic simulator on operational level ever created will be released on our store and on Steam on November 14th. 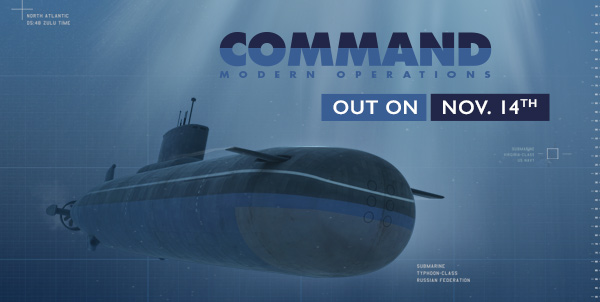 In few weeks you’ll have the chance to simulate every military engagement from post-World War II to the present day, thanks to his unmatched database covering  Aircraft, ships, submarines, ground forces, installations, satellites and even strategic weapons from almost every nation in the world.

At release, you'll find all the original Command official scenarios remastered from scratch and integrated, plus brand-new official and community scenarios to quench your wargaming appetite (more detail to follow)

Updated cold-war and modern-day databases with the latest in hardware and systems mean you’ll never run out of setups to try out. Seamlessly import and use your existing Command scenarios, saves, .inst files and more!