The recent announcement of Command: Modern Operations has been received with praise and joyful surprise and it raised a number of questions about the product and its features.

We had the chance to chat a bit with Dimitris Dranidis from WarfareSims about it. This is the first part out of three Interview, Old and New Tools. Feel free to comment in the forum. 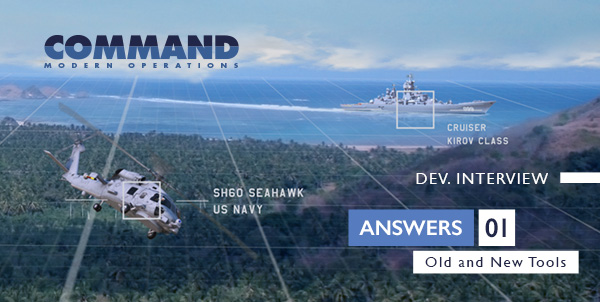 1) First of all, thanks a lot for this great opportunity and for answering some questions about your upcoming game Command: Modern Operations. May I start asking to introduce you and the rest of the team briefly for the few that might not know the “Man behind the Work”?

I am Dimitris, co-founder and head of development at WarfareSims. Apart from leading the development team, the job entails a lot of other things - pretty much anything that is not explicitly assigned to someone else on the team falls by default on my shoulders (yes, that means I also have to take care of the pizzas). It can definitely be a wild horse to ride, but the satisfaction can make it worth it.

The rest of the team is distributed literally around the world. We have members and contributors from pretty much the entire NATO and ex-SEATO spectrum. This makes coordination more challenging but does afford us some significant advantages in coverage, responsiveness and diversity.

2) CMANO has been for several years the most accurate, complex and realistic military simulator around. We know that its full potential has been understood by many Armed Forces around the World, for training and scenario analysis. Having said that, may I ask why and when you decided to move to C:MO and how the development of this title could impact the partnership with the military?

The rallying cry for CMO (or CMANO2 if you will, as it really is “Command 2” in all but name) during its development all these years has been “a better game first, a better simulation second”. Understanding this mindset takes a bit of elaboration.

As you know, we have steadily supported CMANO v1.x for six years now, with a series of major free updates. These updates provided a ton of simulation, mechanics & AI improvement, as well as content; it has been pointed out to us repeatedly that the changes/additions we’ve freely provided to CMANO easily compare to new full-price releases by other companies. However, you wouldn’t know this by comparing a screenshot from Command v1.0 to one from the current public version. Almost all the changes are “under the hood”, so to speak. With this in mind, improving the user interface and gameplay experience became a primary pillar in CMANO2’s development.

At the same time, our market audience composition has shifted. When we initially launched Command, there was only one version, and in that single version we had to pour everything we had in our minds and wanted to share with the world, both from a “game” perspective and a “serious simulation” one. This resulted in a wonderful but slightly bipolar product that sometimes couldn’t decide if it wanted to be above all a mainstream-friendly game or a professional-oriented tool. The branching-off of a dedicated pro-oriented series has liberated us from this conundrum and allowed each path to evolve optimized for its dedicated audience. While the underlying simulation core and various data are similar (and often identical), Command-PE is now firmly a sim-first product loaded to the brim with tools for the professional user, while CMANO and now CMO/CMANO2 are first are foremost (serious) games.

Once this design focus is absorbed, several priorities naturally emerge: The game must be easier on the eyes than before. It must be more visually appealing, without losing its serious foundations. It must be easier to learn, both on the user interface and also on the basic mechanics of modern warfare. It must hold the player's hand more in the beginning. It must avoid flooding the player with information. It must make it easier for the player to find the one specific bit of information (amongst the sea of data) that he's actually looking for. It must let the player put together a basic dust-up without too much consideration for geopolitical realism and diplomatic realities. In short, while remaining a top-notch simulation, it must also become a better game.

READY THE PART I INTERVIEW HERE