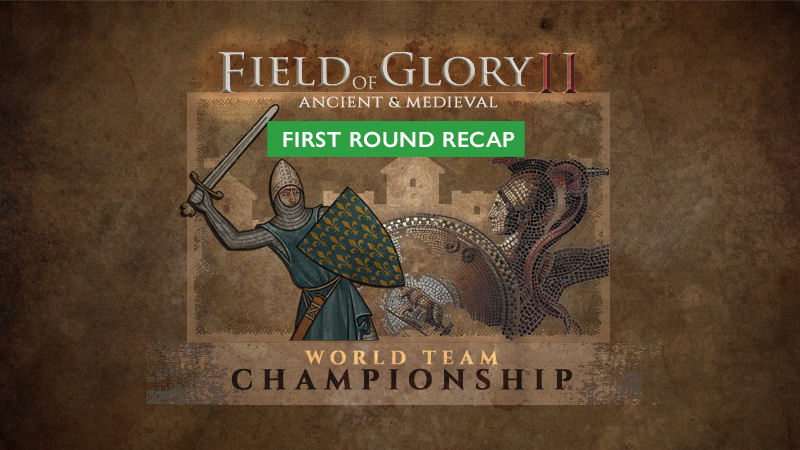 It’s the end of the first round and we have already seen some unexpected results and surprises. We’ve also seen some matches go exactly as expected:

In Group A, UK team “Armchair Heroes” won 3 out of 4 games against “Aegema Australis” and got the first position in the standings.

Team “Furia Francese” representing France and team “Hells on the wheels” from the USA drew their matches 2 victories for each. Sharing the points in doing so, 8 for each team.

“Armchair Heroes” confirmed their skills, and they continue to be the favourites for first place. For second place and automatic qualification to the K.O. phase, anything could happen.

In Group B, team Russia and the UK team “Inglorious Brits” easily won their matches against teams Europe 1 and Italy 2, in this group Russian and UK team are confirming their quality, steamrolling their way through the group.

Team Italy 2’s lack of experience is their main issue, and they are motivated to make improvements soon. Team Europe 1 got a brilliant victory in period 4 vs team Russia, and this gives them the chance for third place, leaving the door open for qualification to K.O. phase.

Group C is the designated group of death, with a couple of very strong teams that faced each other in the first round. In this group, team Poland won 3 games vs “Terror Australis”, only CheAhn recorded a victory for Aussie team against the winged hussars!

In the second match, The Norwegian team with 2 wins and 1 draw were able to gain 10 points vs team Italy 1. With 1 victory and 1 draw, Italy 1 scored 6 points. That is just enough to keep the door to the K.O. qualification phase open.

In Group D, the USA team “Pershing’s Pikes” won the first round against team “Rest of The World”. The Americans confirmed their high-level play by scoring 13 points vs 3. Team Europe 2 and team Serbia drew their match with 8 points each. Both teams gave a strong performance and have equal possibility to take second place. Team Rest of The World will decide who that is.

In Group E we have 3 very strong teams and our first surprise. We know there will always be rivalry between British and French teams and in this case the blues from “Furor Gallico” have given their best. They defeated 14 to 2 the “Cry Havoc” UK team. Meanwhile, the Chinese team “Qin” reached the first position with 4 out of 4 victories vs Canada’s “Hammers of the North” team. Team Qin is rushing for the title, no doubts. The Canadians need more experience and their next round vs the British will be decisive for both teams.

In Group F, the “1st Continental Legion” team with its veteran American legionaries won 4 out 4 matches against the Han Chinese team. It was a tough challenge for the Chinese team, they were certainly wounded but assure us they are ready for the next round. The Kiwis and “World’s Condottieri” drew and are both in second position. They maintained our expectations, will they both push forward to the K.O. phase? Most of us are betting they will.