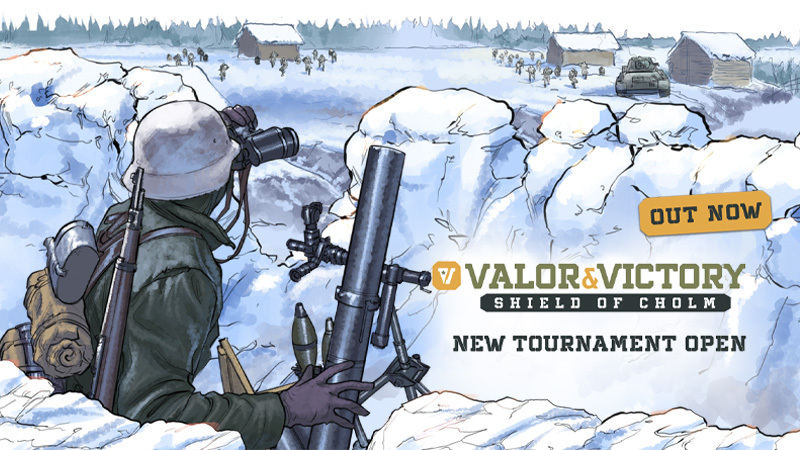 Shield of Cholm, the second DLC for Valor & Victory, is out now.

It’s January 1942 and the Soviet Red Army has begun a series of counter offensives against the German Army. The Germans have started to withdraw and have occupied the strategic town of Cholm. To keep the offensive going the Russians need to capture Cholm. The Germans, from their perspective, could ill afford to lose this strategic point. Very quickly, the town of Cholm became surrounded and was cut off, creating what was then called the Cholm Pocket.

The new DLC features two huge maps, larger than any released in Valor & Victory so far, and twelve new scenarios that occur on the large maps, or on smaller areas of the maps.

Valor & Victory: Shield of Cholm is based on the Kampfgruppe Scherer supplement from Le Franc Tireur. It releases alongside an update of the base game: with the Battle Generator you can now create random scenarios and choose the sides as well as the scenario size and force types; with the Fog of War option opponents can now choose to be hidden when not in LOS. Also a difficulty balance has been introduced: you can manage Dice bias for a harder or easier game.

Tune in today on our Slitherine Twitch Channel at 3.30pm GMT where Hexaboo will show you the new DLC.

After downloading Valor & Victory: Shield of Cholm, do not miss the chance to sign-up to the new tournament “Shield of Cholm (DLC Required)”. You can sign-up here.

The tournament follows Swiss Tournament rules: you can find the full list of rules here.

The first round will commence on Monday, 18th July 2022 at 9am GMT. No further entries can be accepted after the tournament has begun.

The tournament will last 3 rounds, 21 days each. Games are paired, so each matchup will be played both ways. All you need to do is sign up, then the system will pair you with opponents and create your PBEM games. You will be notified by mail of when the tournament is starting and when it will be time to play your turns.