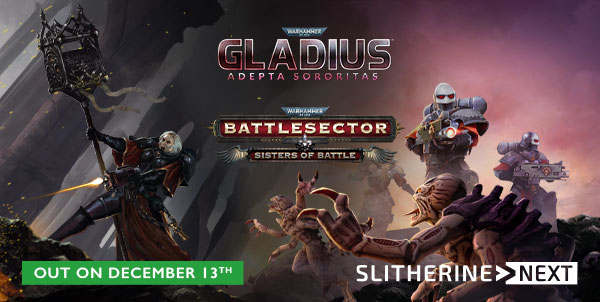 A long-standing order with a rich history, the Adepta Sororitas have always lived in service of the Emperor. Their unrelenting faith and rigorous training provides them with a mental fortitude rare among those that serve the Imperium. This divine protection, perhaps from the very spirit of the Emperor himself, makes every sister an incorruptible fortress that turns aside the profane, the blasphemous, the heretic. 15 units of the Order stand ready to turn back the unworthy on Baal.

During the live streaming at Slitherine Next, we will show for the very first time 3 videos, about the new Sisters of Battle units and their unique mechanics as well as gameplay footage of the new Daemonic Incursion mode.

Daemonic Incursion is an entirely new single-player mode that will be available to all Battlesector players as part of a free update that we’ll be launching alongside the Sisters of Battle Faction Pack.

In Daemonic Incursion, waves of Khornate daemons enter realspace to spill blood, collect skulls and overrun your forces. This is a last-stand mode, in which your objective is simple:

Just like Battlesector, Warhammer 40,000: Gladius expands with the Sisters of Battle as a new playable faction.

The Adepta Sororitas, also known as the Sisters of Battle, are the militant arm of the Adeptus Ministorum. Pure of heart and fanatical of devotion, they place the worship of the Emperor above all other concerns.

Don’t miss the opportunity to see the Sisters of Battle in action during Slitherine Next, on December 13th.