After last week's DLC reveal announcement went out, we were humbled by our community’s fantastic response and excited enquiries, so we've prepared a follow up for you to further sink your teeth into. 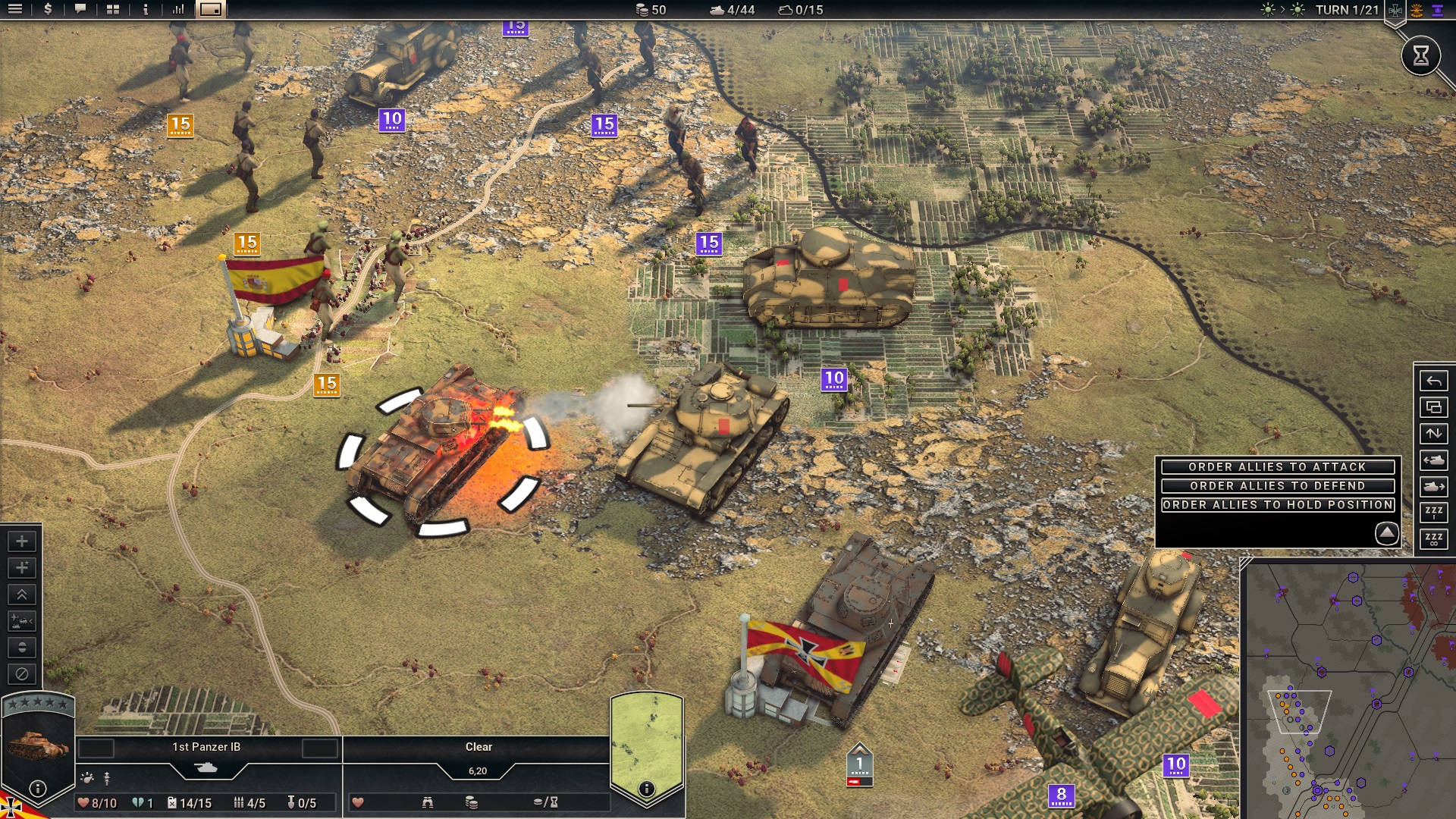 The Axis Operations campaigns aren't just going to be more scenarios.  The goal is to be bigger, better, and more advanced than the campaign that Panzer Corps 2 has already provided.

1.  The factions involved, and new mechanics to represent them.

So, in our research of the Spanish Civil War, we uncovered a wealth of information that we felt deserved some recognition in the gameplay.  The Spanish Civil War wasn't just a Nationalist faction attempting to overthrow a Republican faction, there were Falangists and Communists and Monarchist and Anarchist factions all taking sides. Not to mention all of the foreign involvement from fascist Italy and Germany to the International brigades and Soviet military aid...

Suffice to say, it was not a simple conflict. 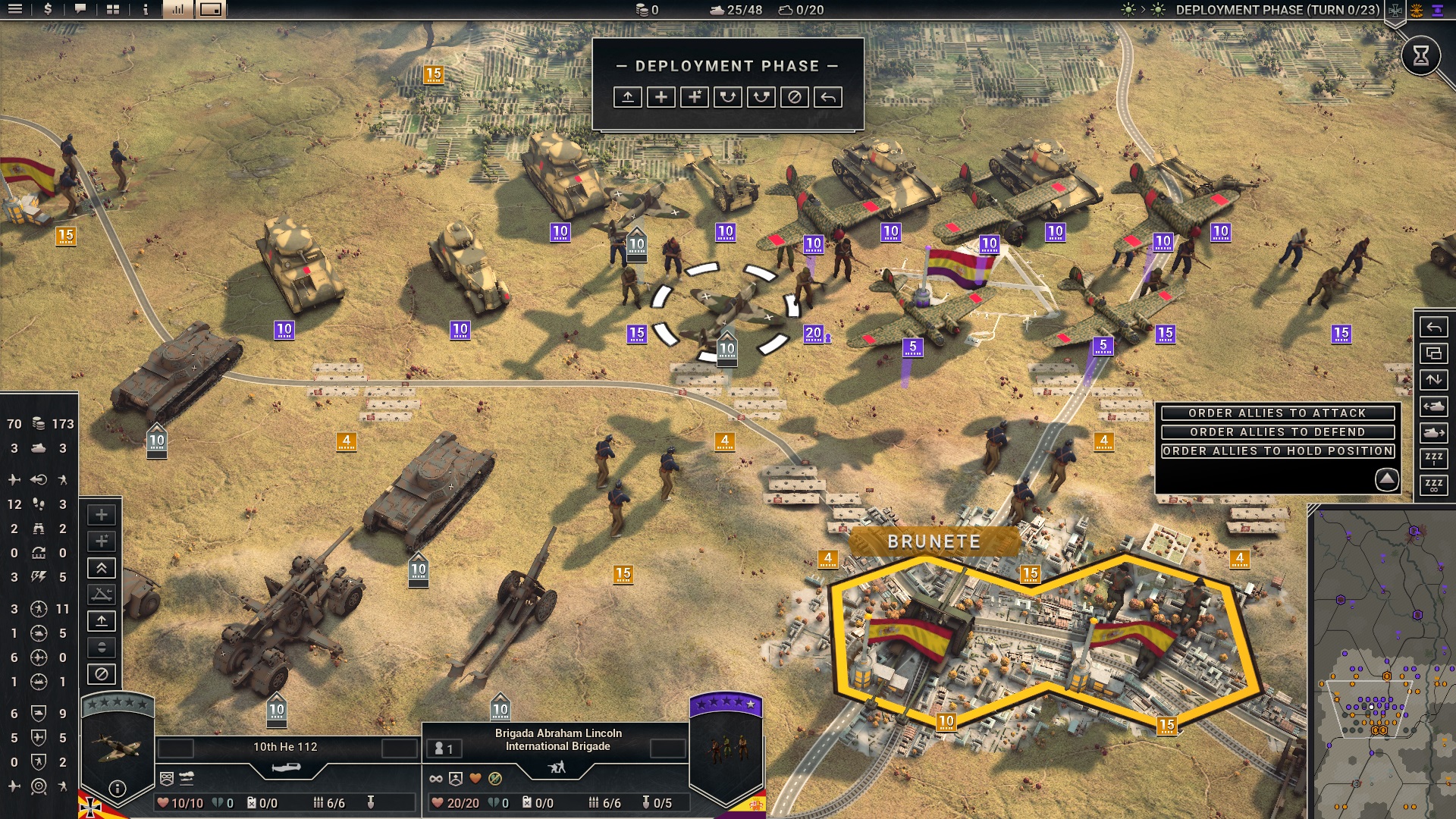 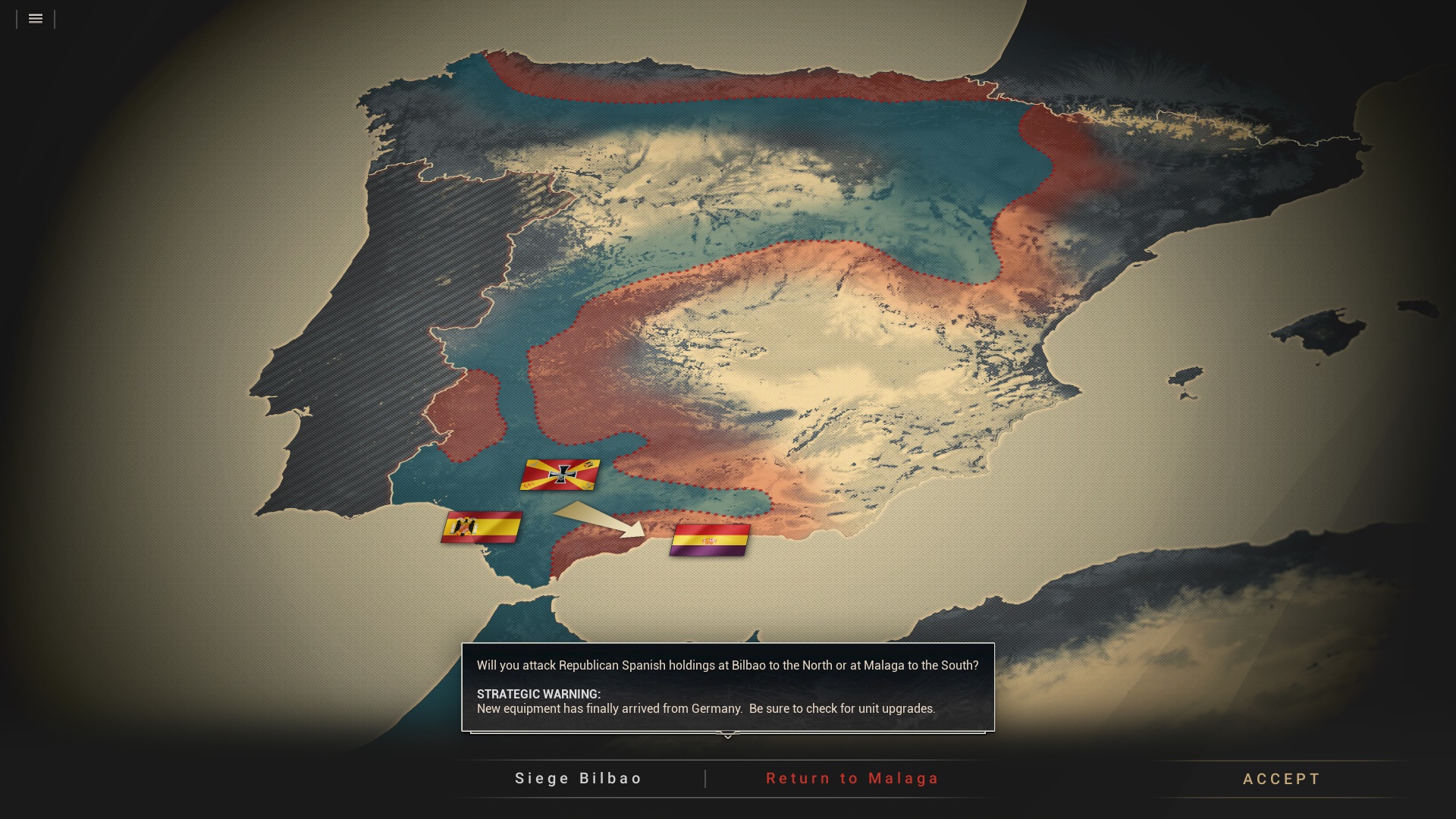 Historically, German aid to Nationalist Spain during the Spanish Civil War was fairly unique in nature.  There were no mass divisions of German infantry roaming the battlefields of Spain.  Such a level of military aid would have seriously undermined the legitimacy of the Spanish Nationalist cause.  The Condor Legion was primarily made up of aircraft, though there were some other armour and supporting artillery and air defence assets at their disposal.

To try and properly represent some of this complexity, we've done several things.

Firstly, we're adding a wealth of infantry types to the game.  Players should expect to encounter everything from Republican militia troops to Franco's professional Army of Africa colonial troops to standard Republican Mixed Brigades (Brigada Mixta) to various International Brigade formations and more.

Each infantry type has been carefully stat balanced to present a good spectrum of unit types, and here are just a few of the infantry that we've created new models for, all based on historical references. 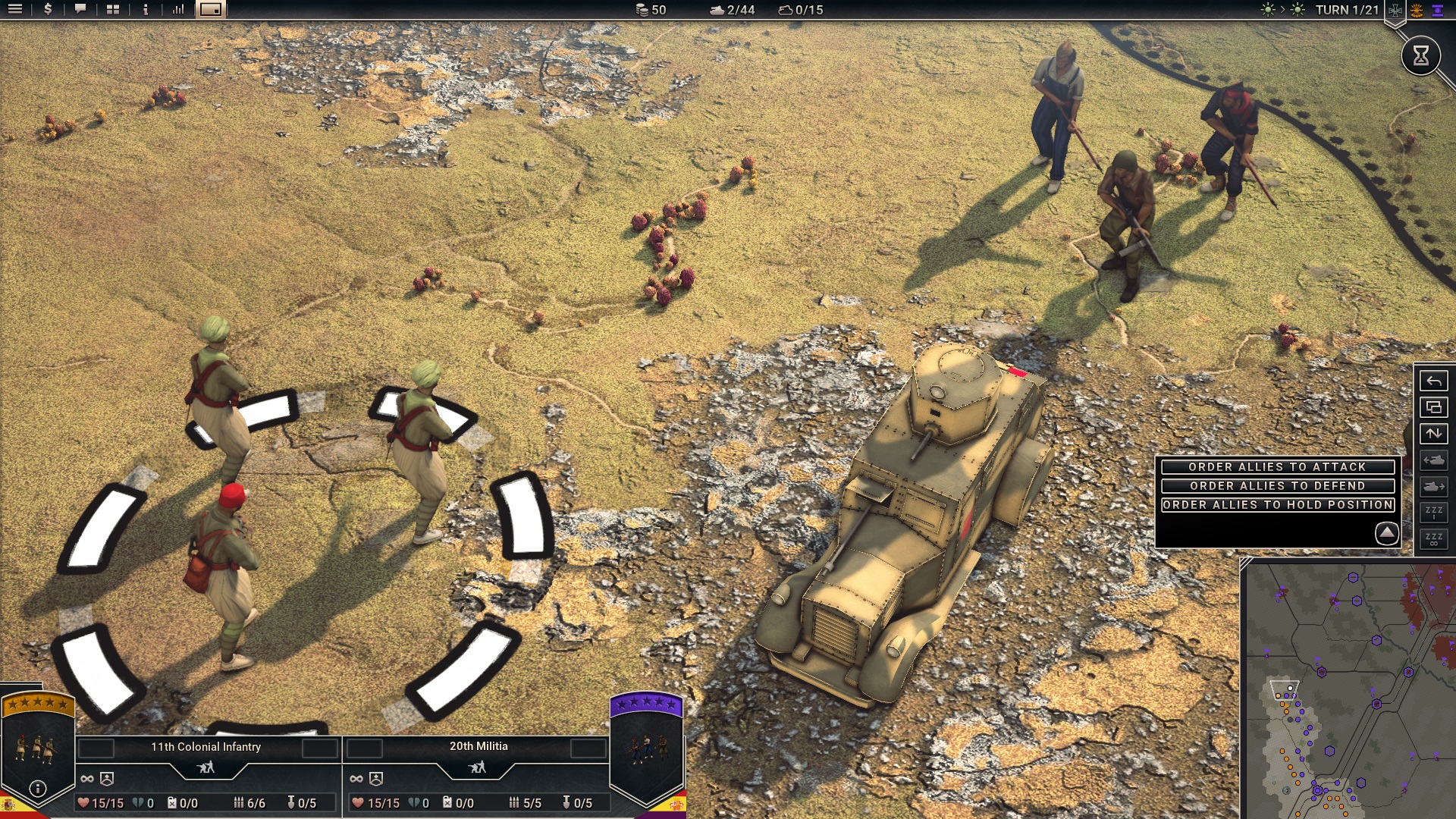 Secondly, rather than just placing pre-scripted friendly AI controlled units on the board, we've added a new system of communication so that the campaigning player can influence the behaviour of their computer controlled friendly forces!  We felt this would be a very interesting new feature to bring to Panzer Corps 2, and look forward to putting it in your hands very soon.

The reality of this conflict has dramatically altered gameplay, because it means that the player has no German infantry of any kind at their disposal for the length of the Spanish Civil War.  You will be expected to work closely together with the AI controlled Spanish Nationalists to achieve your victories.

With the player controlling tanks, artillery, and air forces and the AI controlling all infantry forces, coordination and co-operating between you and the Spanish Nationalists is the key to achieving victory above and beyond the most basic of objectives. 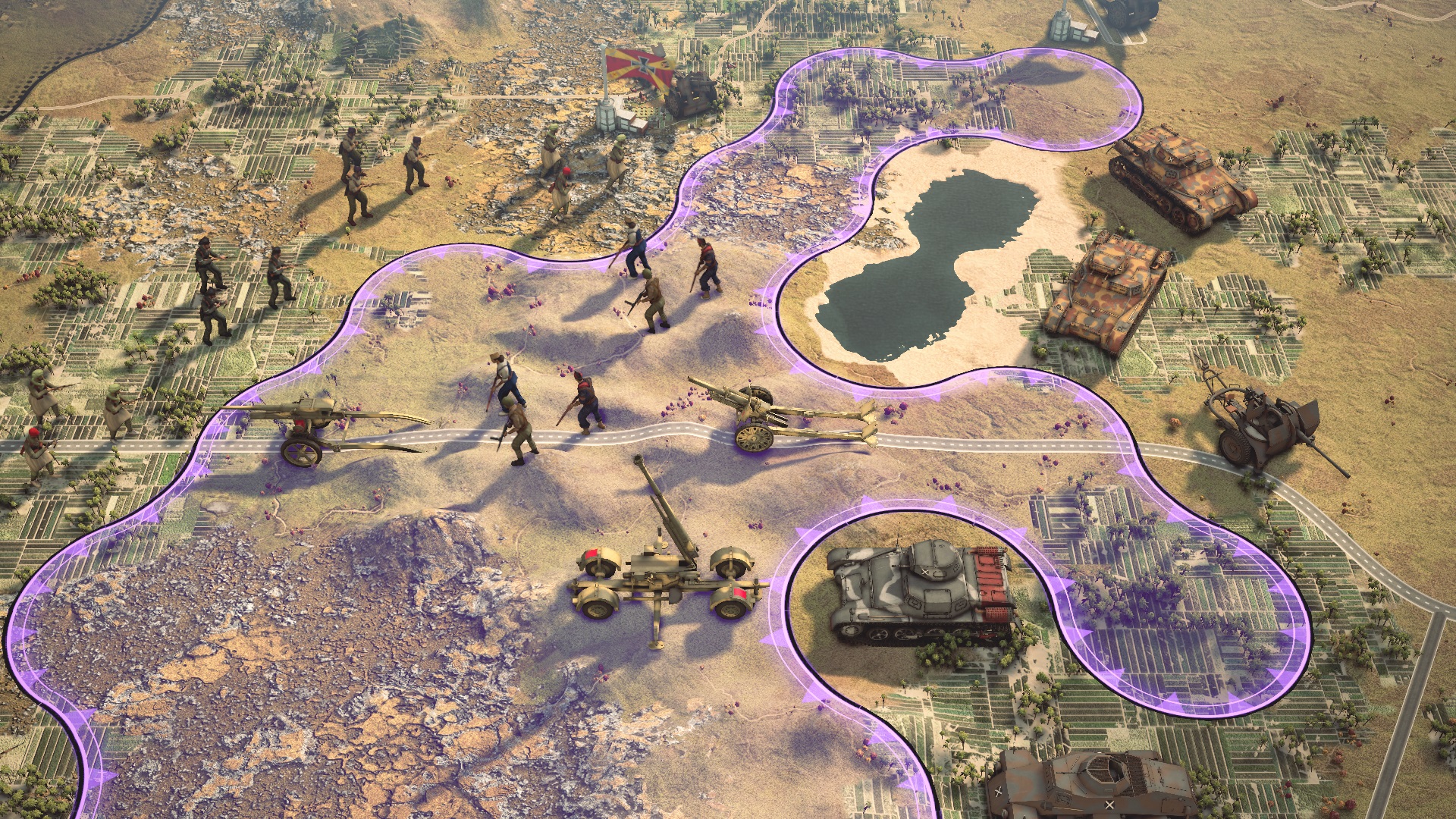 And prepare for the dramatic conclusion of the Spanish Civil War that will feature the very first multi-sided, 3-way conflict in a Panzer Corps 2 campaign scenario.

Because we realize that this design change may be too radical for some, we have taken an extra step to make sure the Italian CTV (Corpo Truppe Volontarie) has proper representation in this conflict.  If a player is so inclined that they feel they must have their own infantry, Italian CTV forces are available.

To aid in their fight against the player, the AI has received several improvements since the launch of Panzer Corps 2, and it also has received several new types of orders that it can use to good effect.  Hit and run tactics were especially prevalent and are at the AI's disposal in these campaigns, so maintaining secure flanks and good vanguards for your forces will be more important than ever before.

Additionally, we're levelling the playing field by introducing Panzer Corps 2's first appearance of enemy units with hero abilities attached to them.  Double Fire artillery and Zone of Control ignoring tanks have joined the ranks of the enemy, so watch out.

There might even be a very special “Nemesis” level enemy unit that might just haunt and harass you throughout the course of the entire campaign... unless you manage to defeat them decisively!  Mechanically, this represents the first appearance of enemy units that can potentially survive and progress between scenarios. 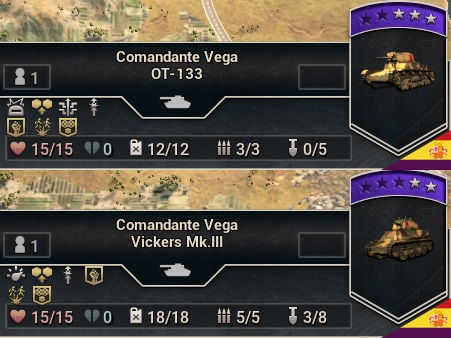 One complaint about the traditions of Panzer General and Panzer Corps is the lack of mission variety.  We've all seen maybe a bit too much of 'Capture all Victory Hexes' by now, we think.

While we’ll still make appropriate use of this mission type occasionally, players will also see a lot more objective variety moving forward.  Missions types such as rescue, escort, interception, mine laying, and others have been spread out across the campaign.

And the way we've balanced this is by bringing back Degrees of Victory.  Rather than have every mission be a binary 'win or lose', we've added more variety.  Every scenario has a basic objective that you must complete to progress the campaign.  This is the lowest degree of victory though, and is suitably easy to achieve.

If you really want to see some very unique rewards and bonuses, you'll want to push yourself to accomplish the far more difficult and varied bonus objectives.

We've even implemented a new currency system to handle this interaction.  As you complete bonus objectives, you’ll earn Commendation Points.  At various points in the campaign, offers will be made to players who have earned enough Commendation Points... offers of fantastic bounties of captured equipment, special prototype units, and possibly even access to famous and legendary historical aces and officers of the war. 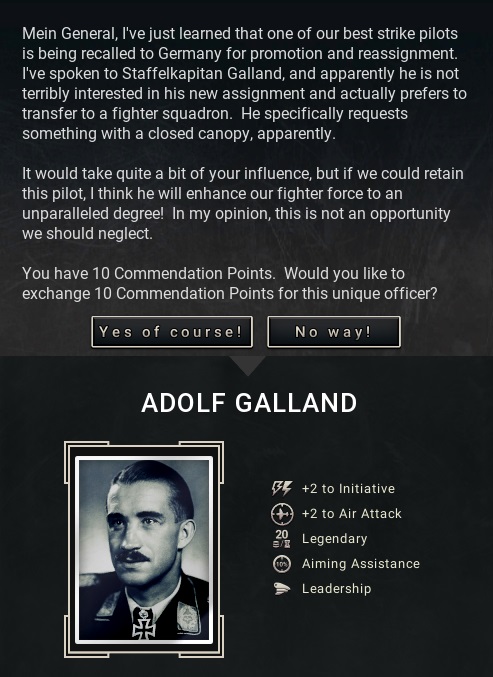 We hoped you’ve enjoyed this bonus reveal and are looking forward to firing up your Panzers for a new campaign full of new features starting next month. 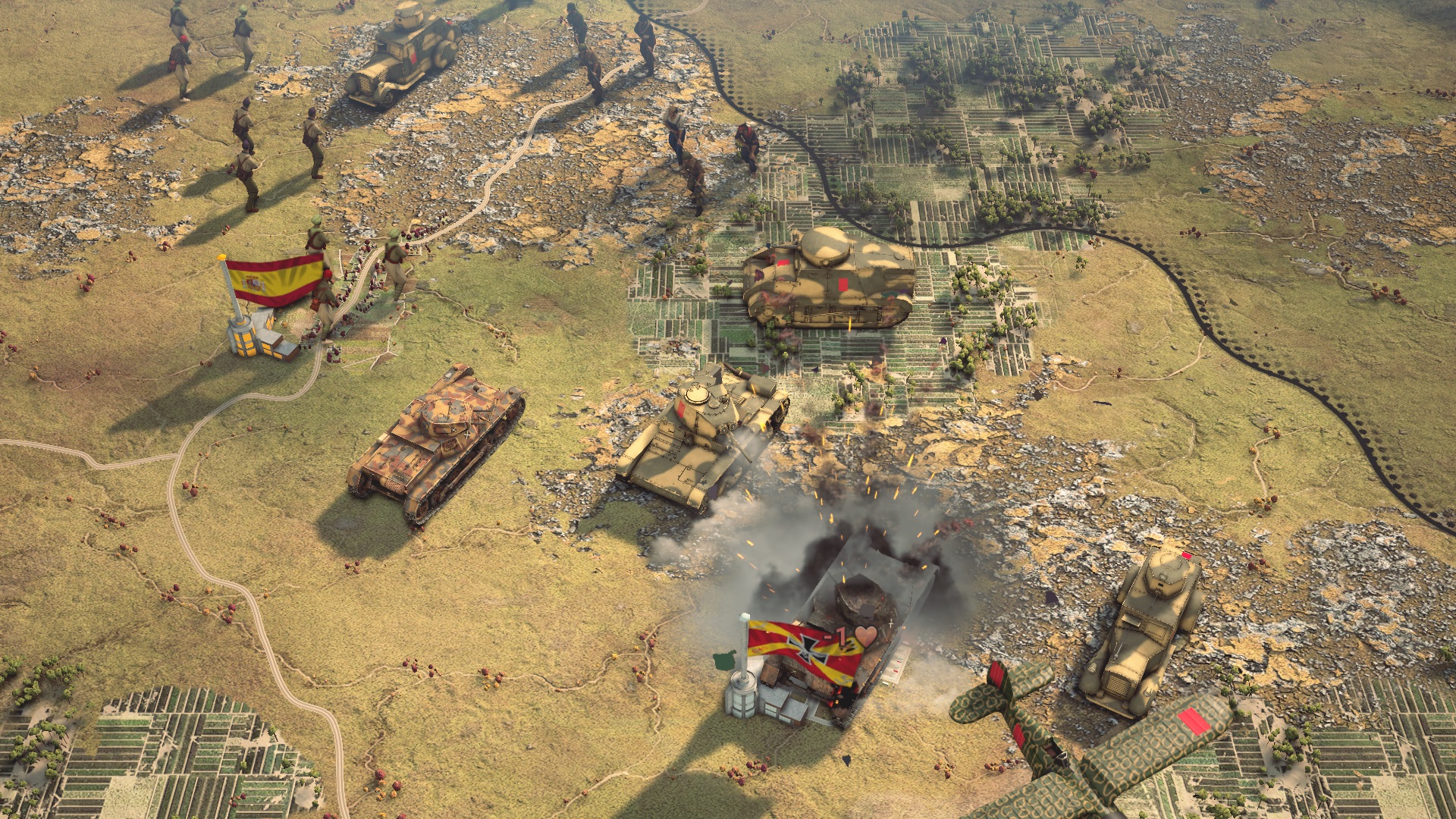