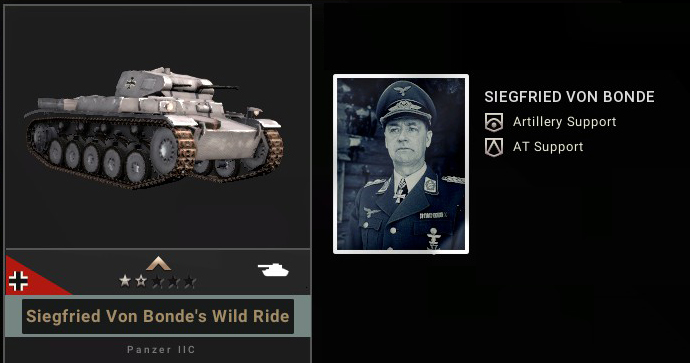 With the second Panzer Corps DLC coming this month, we have a special preview from one of our BETA testers to share with you: a detailed play by play of the very unusual and unique Czechoslovakia scenario that starts the campaign.

Because this is such an unorthodox scenario, this AAR preview also serves as a de facto guide to finishing the scenario as quickly and easily as possible while also satisfying the main bonus objective.  So consider this a major spoiler warning!

Thanks to our BETA tester Monkspider for providing the following AAR. 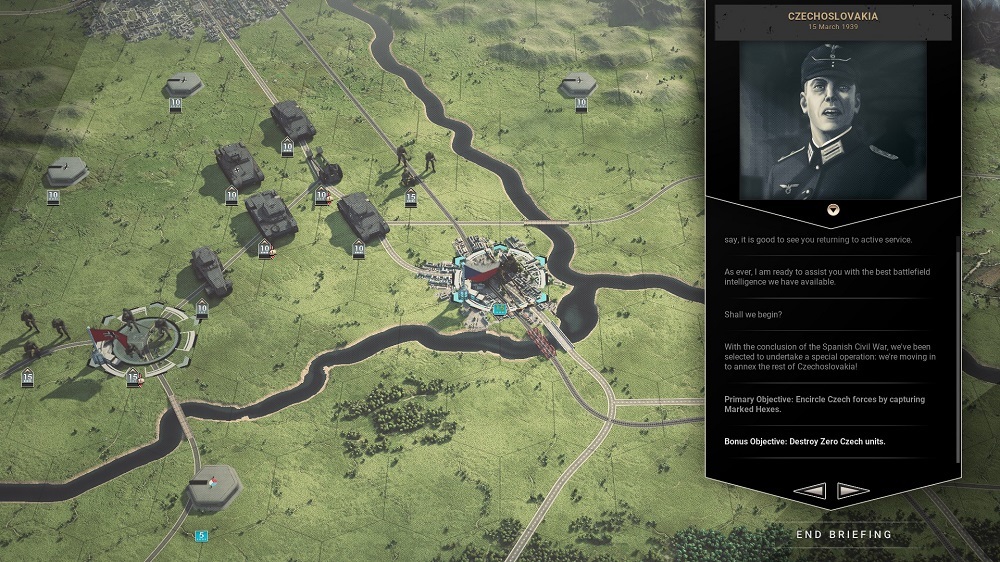 Welcome to my scenario guide for Panzer Corp 2's latest DLC Axis Operations 1939.  In this DLC you will get to visit a wide variety of locations all over Europe, the first of which is here in Czechoslovakia!
After the Munich Agreement in 1938, Germany annexed the Sudetenland which included the Czechs' extensive mountain fortifications. Then in March 1939 Germany annexed the rest of the country, betraying their previous promises at Munich and gaining all of Czechoslovakia's extensive industrial base for themselves. This scenario focuses on this final occupation of the country.

In this scenario our goal is to either occupy ten objective hexes or to occupy Prague and Pilzen. Here's the kicker though, if we want to accomplish the bonus objective we must do one of these two things WITHOUT destroying any enemy units. If we manage this, we will earn five commendation points. With some smart play, it can even be done VERY quickly and easily. A lot of players struggled with this bonus objective in testing but with this guide you can speedrun the scenario while still achieving the bonus objective.

My plan was to have two attack forces attacking down the western and eastern sides of the map respectively. You have total vision of the map due to Czech informants which greatly helps in your ability to formulate a plan.  Because I knew artillery was going to be so useful I bought a couple more artillery units before the battle started. This purchase ended up being a little excessive. It seems like the scenario starts you off with more artillery than I remembered in the older version of it, oh well! You do want at least two or three artillery units though. Oh, and one other essential detail that will your life so much easier, have a bridge engineer with your troops going along the western edge. You will see what I mean later. Luckily the preset core was kind enough to start me off with one. If you are importing, strongly consider buying one just for this battle.

So, for the first turn, my eastern task force had a Czech anti-tank gun to dislodge. Remember, we can't completely kill enemy units but we can sure damage them. I used my artillery to weaken it and then attack it with infantry which caused it to retreat from the objective hex and then occupied the hex with a Panzer. The aforementioned infantry would stay behind to guard the hex for the rest of the scenario.  The rest of my units headed east over the river. 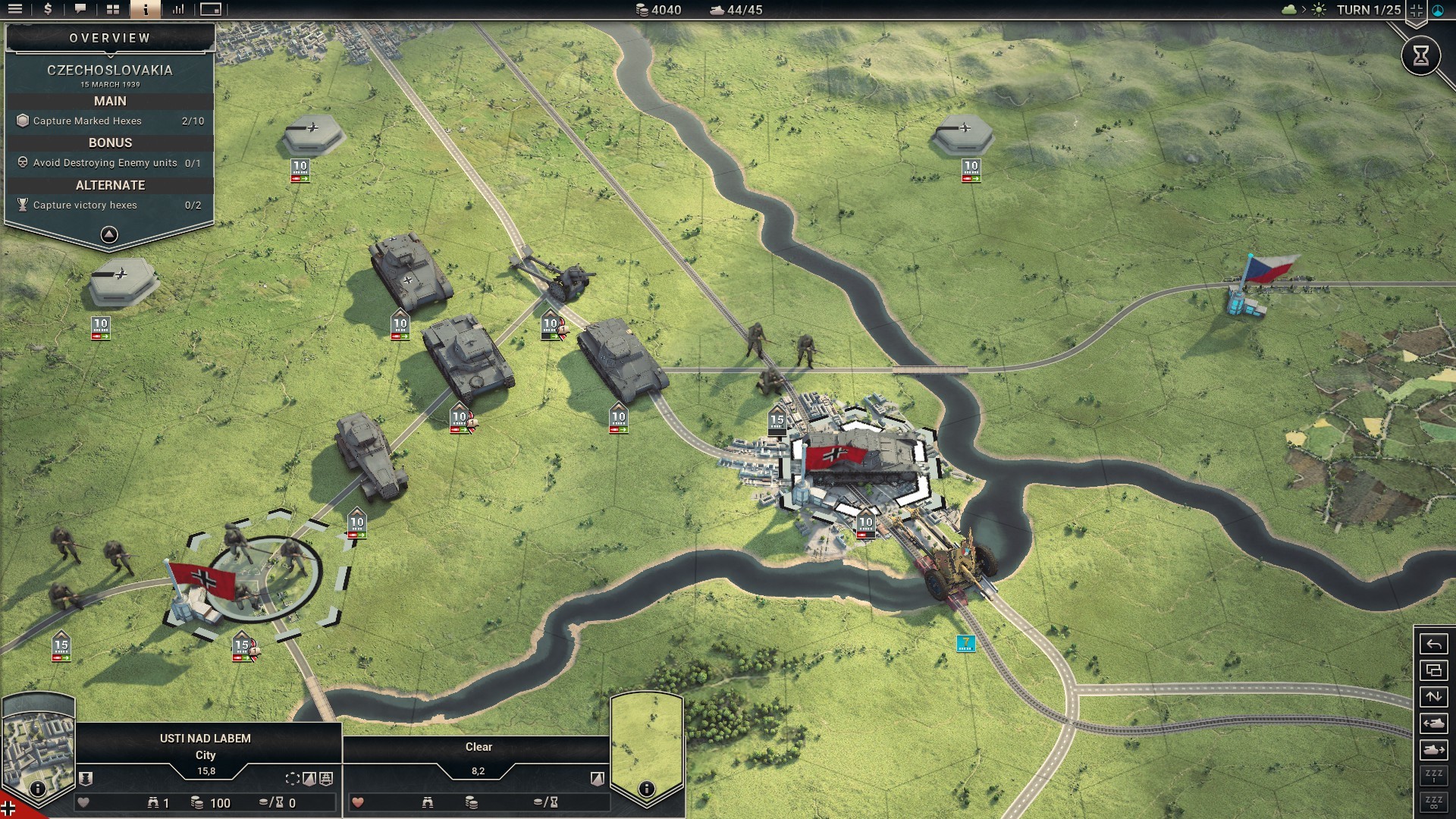 In the west my troops had no enemy units to contend with yet, they just headed toward the western edges of the map and over the river, capturing another one of the ten objective hexes. There is also an objective hex you start off controlling so I had an infantry unit stay behind to defend it. 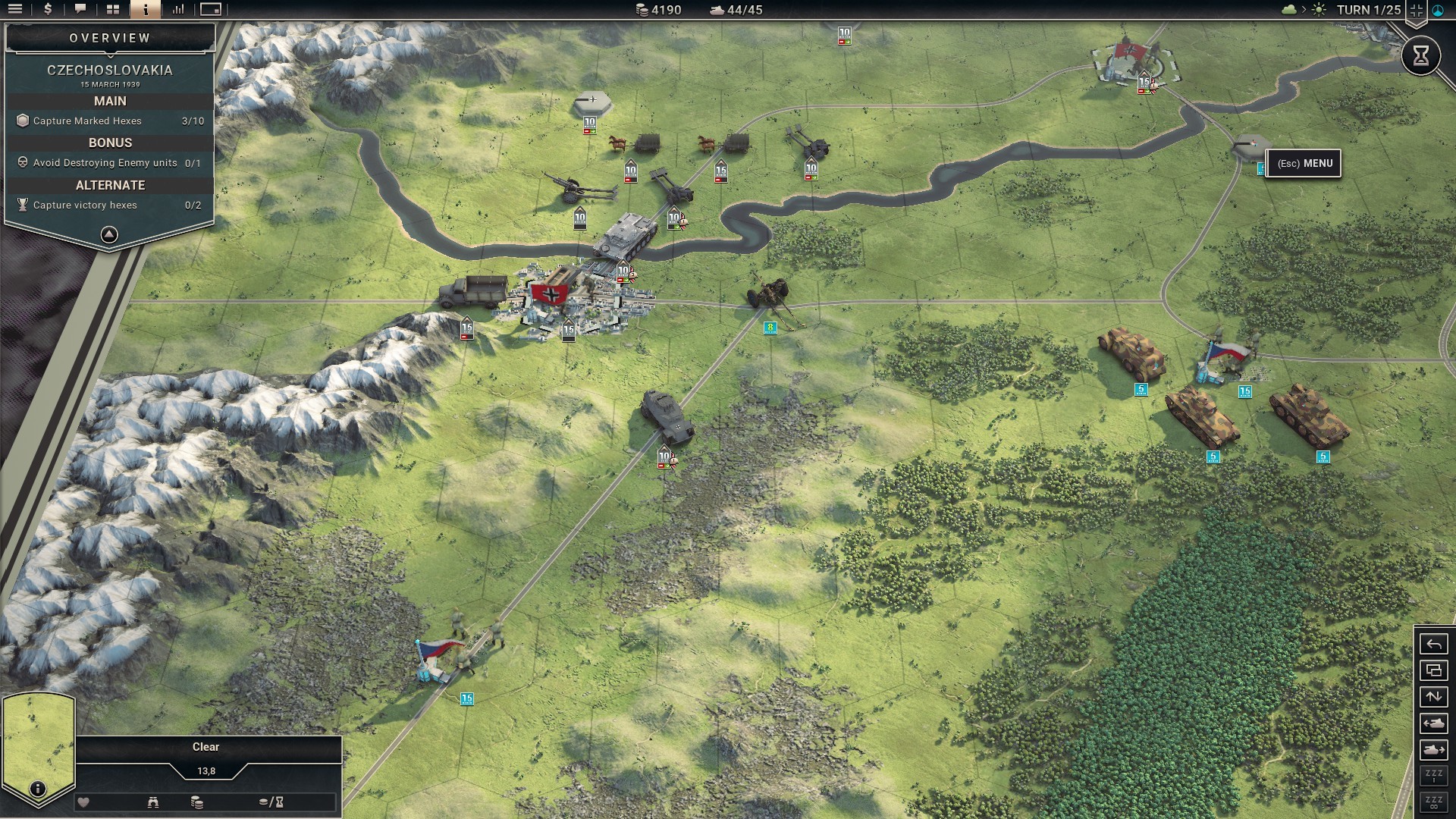 That was all for my first turn. At the start of my second turn I got a notification that I was getting a free infantry unit. Hey, that's great! I could use some extra troops to help guard the river line where you start off at from enemy counter-attacks. It's always nice to have a lucky turn of events such as this. The infantry unit comes from our previous conflict in Spain and even non-importing players will get them. 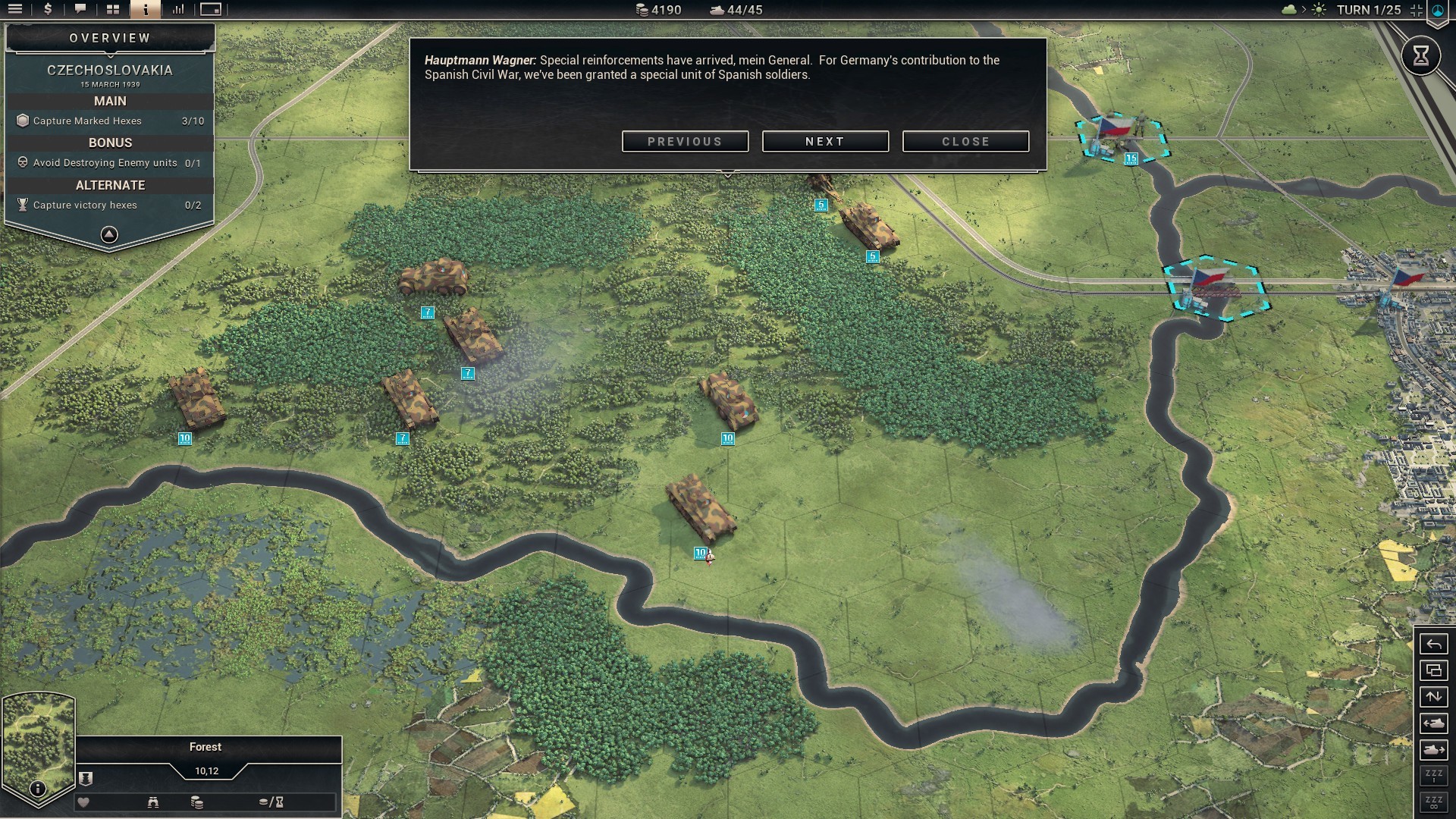 The unit is called “Azul Infanterie” and is reference to the famous elite unit of Spanish volunteers called the Blue Division (or Blau or Azul, whichever you prefer) that fought for Germany on the Eastern Front.

Well, back to the battle, in the east my troops continued advancing. I set up my units to attack an enemy unit guarding one of the objective hexes on the next turn. 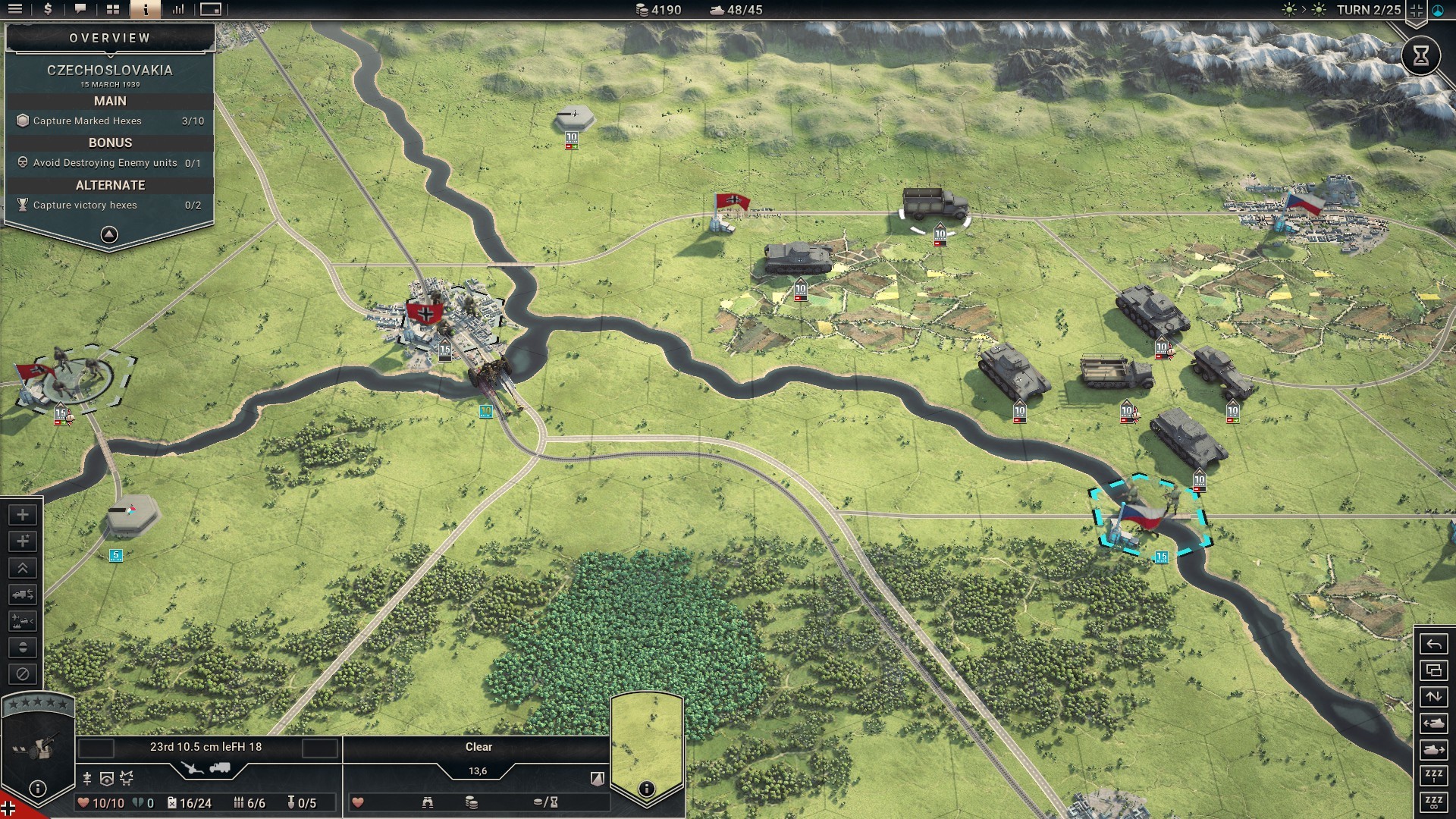 In the west I came across some entrenched infantry guarding a non-objective city. Even though its not a necessary city for scenario, he is definitely in my way! I set up my units so that I could try to nudge him out of the way next turn so my troops can keep heading south. 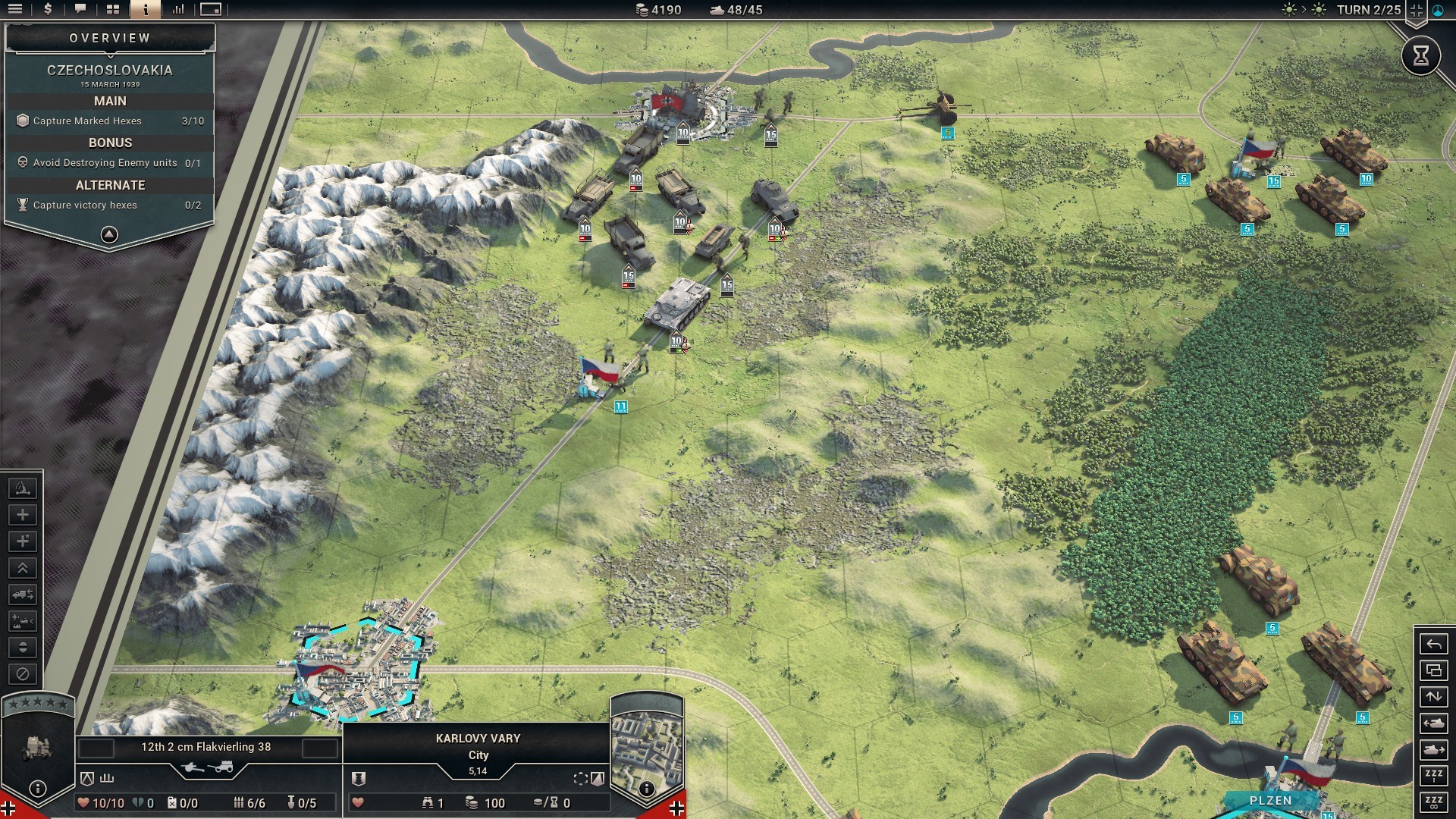 In between turns an AI armored unit attacked one of my starting objective hexes, luckily I had  a couple units there to defend it including my new Azul Infanterie. Remember to guard those objectives! 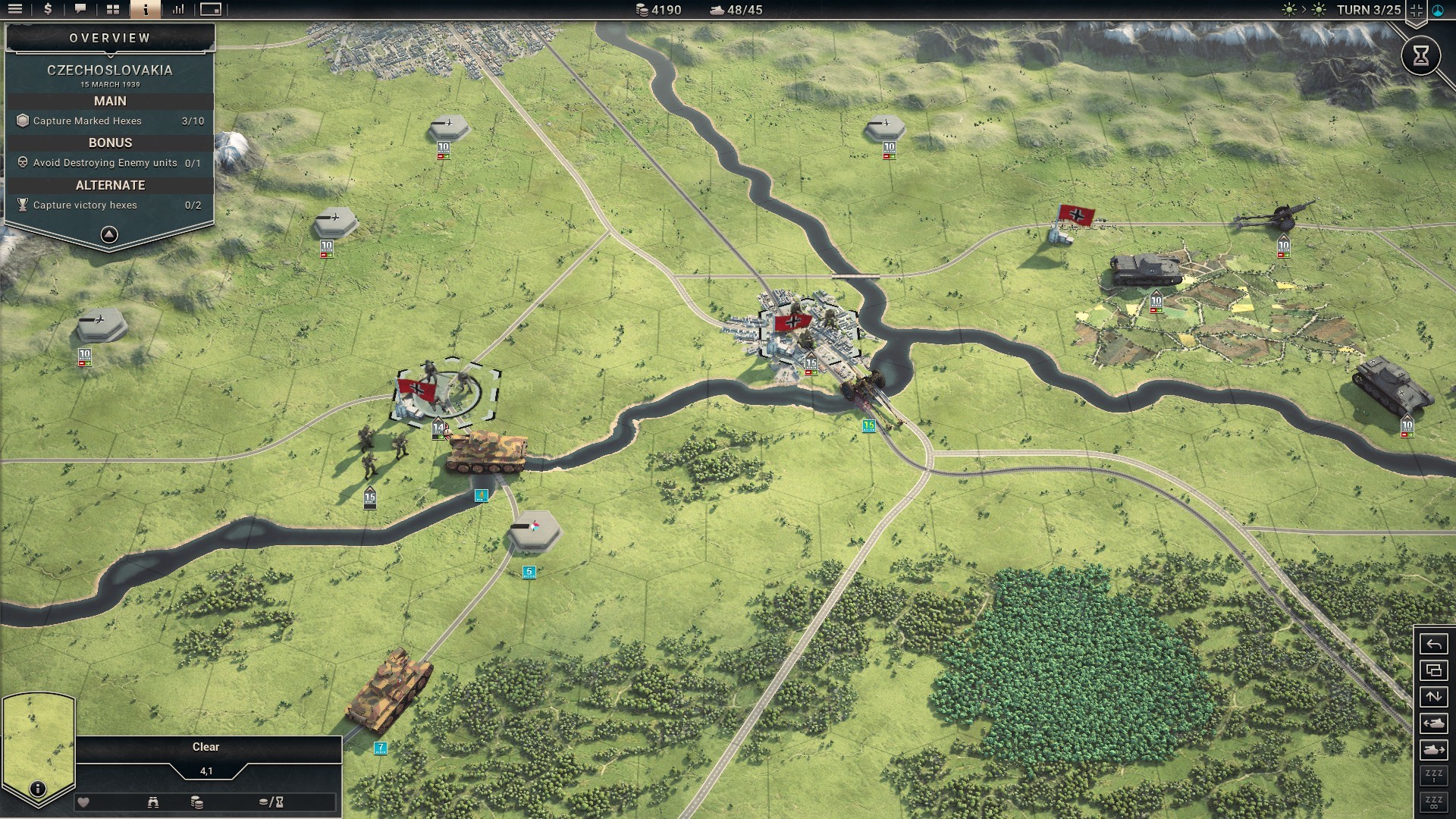 On to the next turn. My eastern units captured the objective they were in position for. As always, the key is to use artillery to soften the enemy up and then attack to dislodge them from their position but do not kill them. I then moved troops in position to capture the next objective. I am now just north of Prague which appears to be an open city.

In the west things required a more delicate touch. I softened up the enemy infantry that was blocking my way with artillery then moved a recon car to the right of the enemy and attacked. It was important I attack from this direction because I wanted the enemy to retreat to the left. It retreated and I attacked again with infantry which moved it one more space which gave plenty of room for my units to now move through unimpeded. You have to keep in mind if an enemy wants to retreat but doesn't have any more movement point, it will surrender. Since it was a normal infantry unit I knew I could make it retreat twice without it surrendering because a surrendered unit would cause us to fail the bonus objective.
After getting that enemy infantry out of the way the rest of my western task force steamed on ahead to the south and towards the last objectives. My bridge engineer was necessary for crossing the river without having to approach the heavily defended Pilzen.  Luckily I managed to get him very close to the river and captured another victory point. 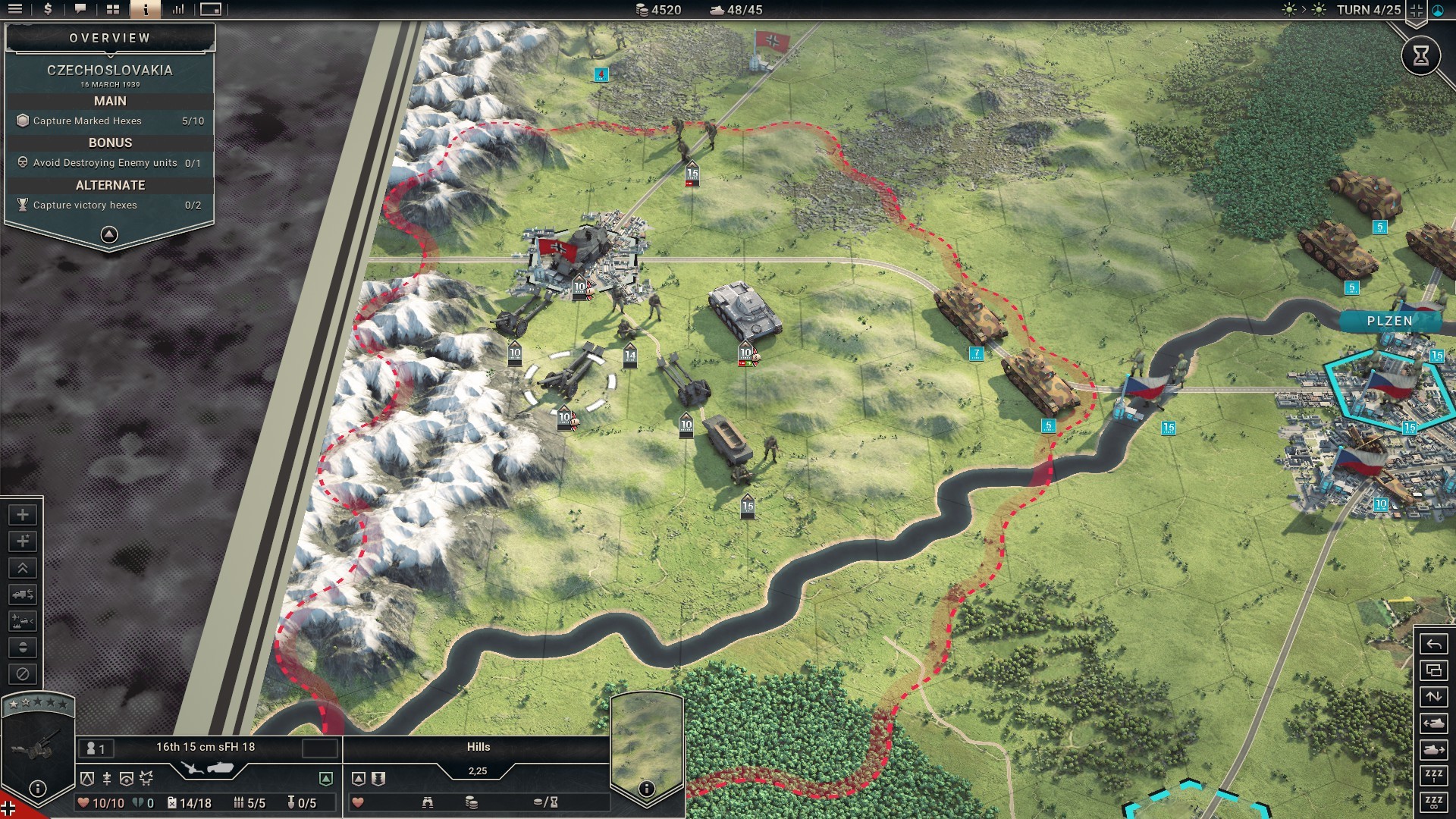 It's now turn 4. In the east I captured another objective using the same techniques after putting my troops in position last turn. My recon car headed south toward the last objectives which appeared to be undefended. The rest of my eastern task force is going to need to stay in place to defend against an enemy counterattack that appears to be brewing. 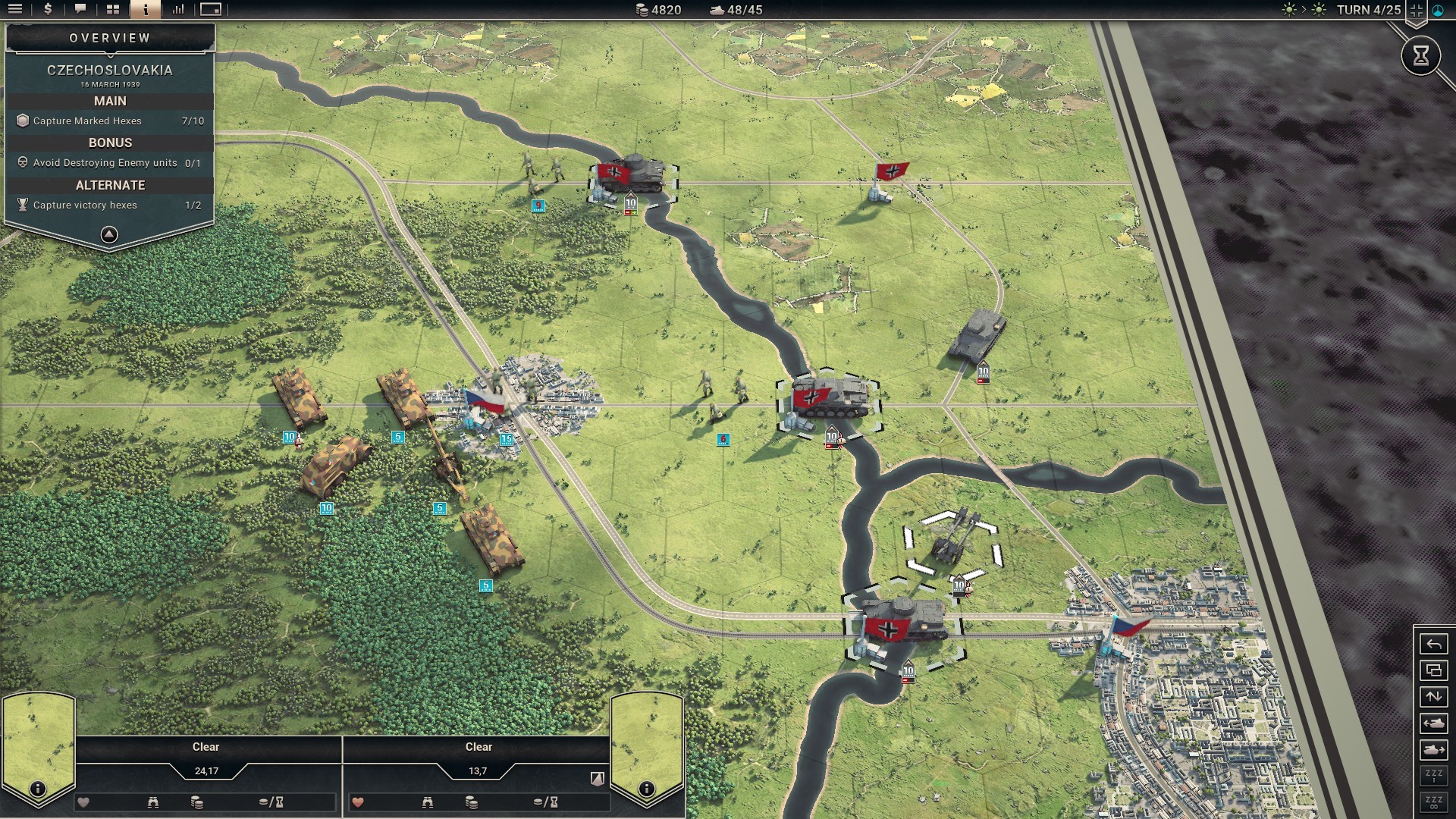 In the west my bridge engineer gets into position and allows all of my troops to cross the river, bypassing Pilzen and also capturing another objective. There are now only two objectives left and both are undefended. The end is near! I think I can finish the scenario next turn. 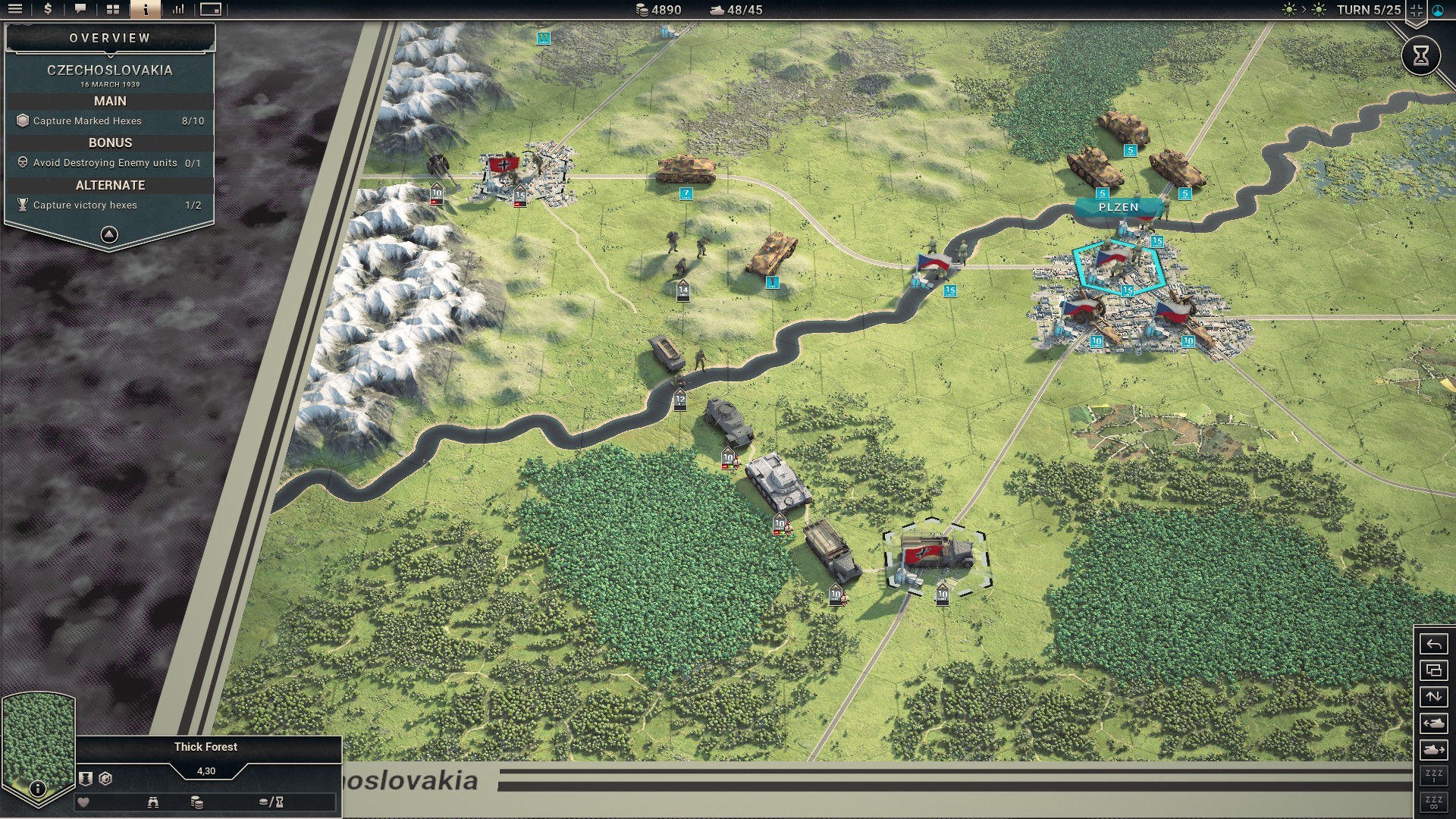 In between turns the AI continued attacking my troops in the east around Prague. There were three objectives being threatened over there, but luckily my troops manage to hold the day. They received a penalty being on river hexes so I think an optimal strategy might be to try to defend the hex in front of the objective hex. Oh well, at least I kept a lot of units in the area. 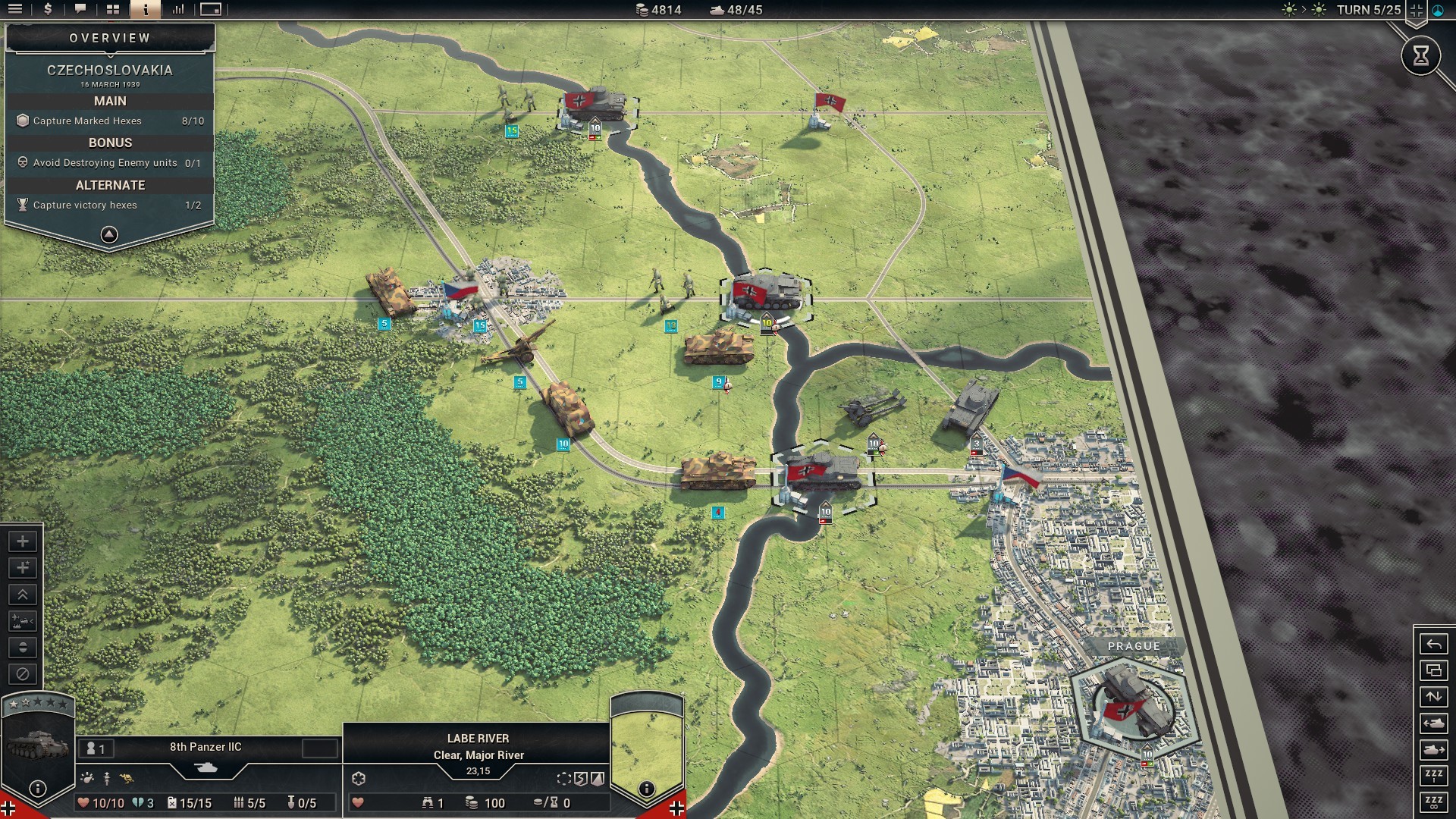 I wasn't able to finish the scenario on turn 6. The Recon car from my eastern task force captured one objective but an enemy recon car from around Pilzen got in the way of my western troops from getting the last one. Those cursed Bohemians! Oh well, just a small setback. 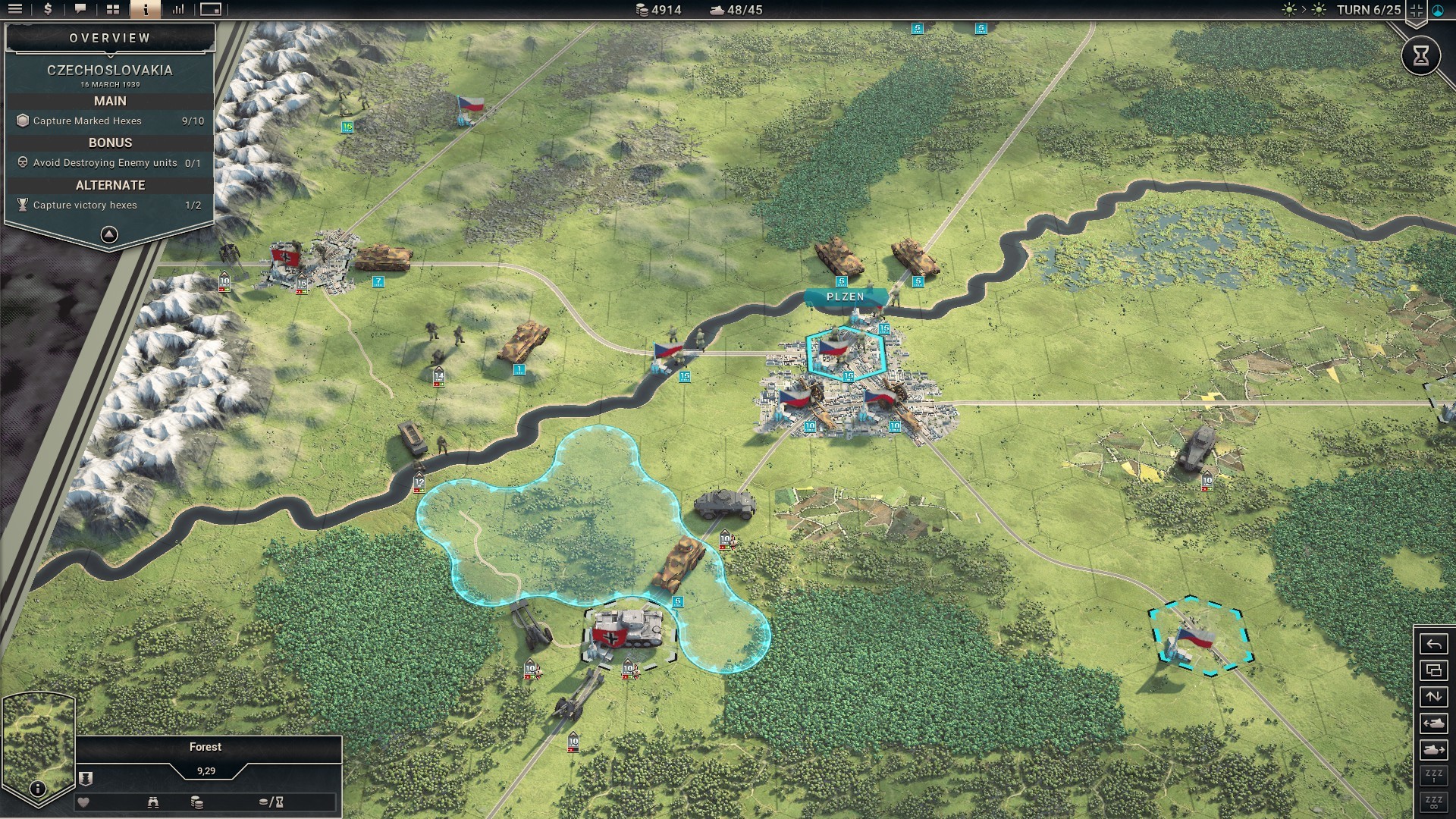 A very small setback indeed, on turn 7 my recon car entered the last objective hex and the scenario instantly ended and Hauptman Wagner delivering the debriefing. I actually did it, a complete victory, satisfying even the bonus objective! The five commendation points were mine! Now, time to claim that bonus hero I was telling you about in the next scenario. Who is this hero, and what does he do? You will just have to play to find out! 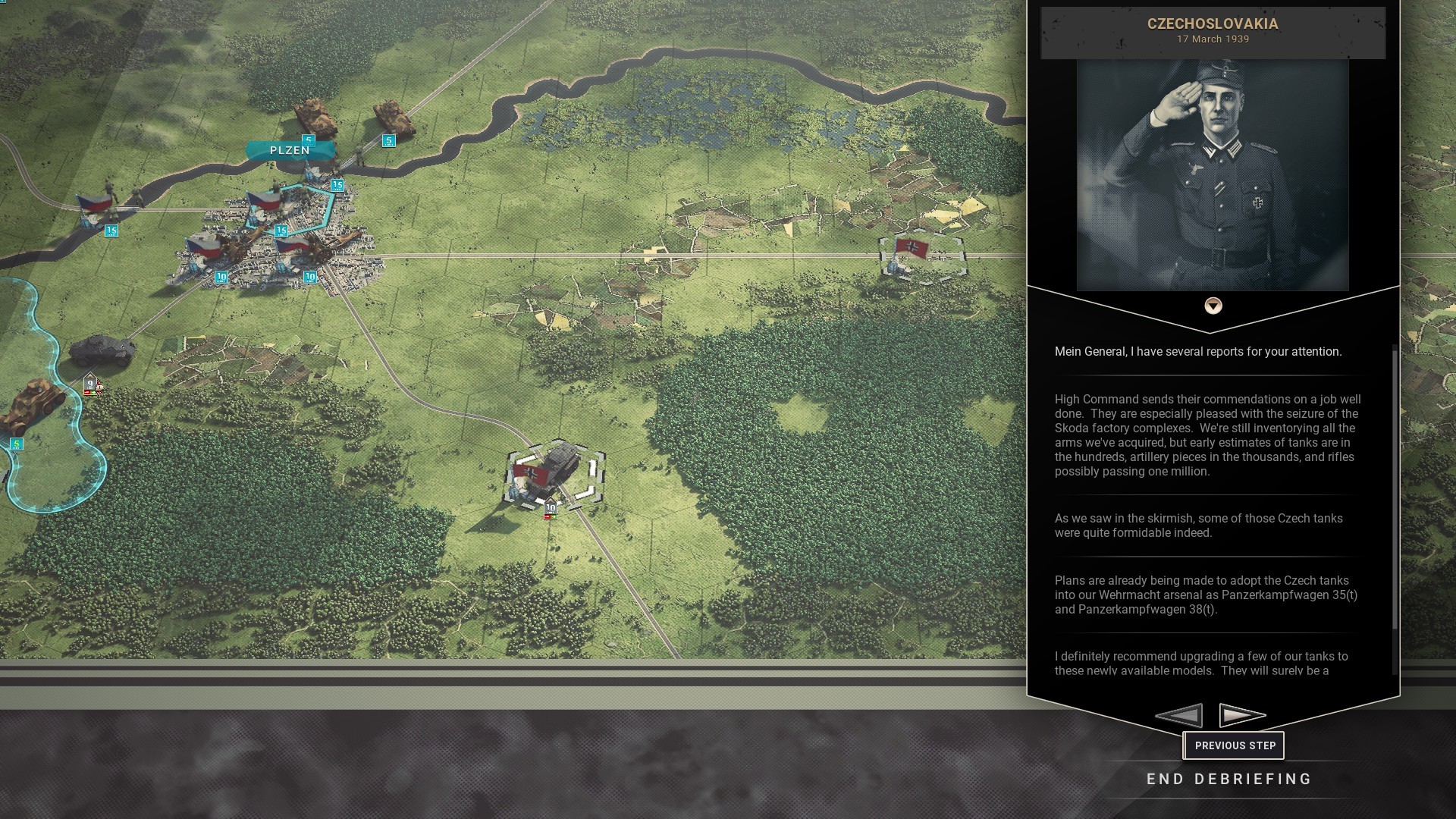 Well, I thank you for reading my AAR. I highly recommend you check out both chapters of the Axis Operations DLC series for Panzer Corps 2, both Spanish Civil War and 1939. They are full of extremely-well crafted scenarios, great writing, likable characters and lots of replay value!