We’ve asked our community on Discord to put forward some burning questions and we’ve attempted to answer them all the best we can at this point in development. Please note I may have paraphrased some of the questions, especially when there were several that asked the same thing.

Q: What are the main changes/improvements? What are the differences with the original Master of Magic? So far, we know about the graphics and hexagons on the world map, but any other outstanding features?

That is a question I intend to tackle fully another time, as we are pushing closer and closer to a feature complete build, I want to wait and collect all the big ones in one go, because we will inevitably make changes once we play our game and find things that may or may not work for our version.

But, not wanting to leave this entirely unanswered, customising your playthrough is a feature we hope to greatly improve from the original. So apart from the usual difficulty settings, we’d like to include as many on/off options as we can, especially when it comes to things that stray from the original, but not exclusively so.

As an example, in addition to the option of turning the game’s events on/off, we already have a second pack of events that will also be optional. Another plan is to have customisable AI difficulty. While these are only a few examples, our intention is to build up this list, especially once the game is playable and thus open to more precise feedback.

Another feature that already received a makeover, are the events. There will be two event packs at launch, one, the original 18 events, and another, with brand new ones. You will of course be able to switch both/either on and off.

While the original events are copied from the old game directly, they have been updated and given alternate routes. So, when you encounter an earthquake for example, in the original, it was simply a notification, in the new version, you may have an option to mitigate the effects. The new event pack will follow the same rule, events that occur will have multiple ways of resolution, instead of them being simple notice.

Work In Progress screenshot of the new earthquake event.

Q: What mechanics did you, or will you alter in the remake and why, considering that it is 2021, and so, in theory, one can recreate everything from 1998?

This question arose from our previous statements where we said that : "mechanics may be altered if we are unable to recreate them".

For starters, a simple change of the engine will often make some features impossible to recreate. Then there is the fact that there is no source code, or a comprehensive/detailed design doc from the original dev team. There is of course tons of work done by the fans over the years, but that is still pretty much guess work and reverse engineering. So in short, our design doc is the original game, but there will inevitably be things that we’re not able to remake.

On top of that, there is the domino effect. So, some of the changes we had to make due to my previous point make it impossible to implement other things exactly as they were in the original Master of Magic, because they have to work in our version. And of course there are also changes that need/should be done due to new game technologies/gaming trends etc, improvements that a new player will expect and so on.

One of the most impactful changes so far, has been the non-arbitrary battle/strategic value assigned to units. We base this value on battle simulations between units which gives us a good basis for calculating the numbers. However, these differ from the original values and so this automatically affects things like location budgets, or the algorithms responsible for spawning units. This change was necessary, as some mechanics require very rigid systems to be placed in, due to the fact that we aimed to make the game very moddable. To achieve this, we had to generalise some systems to ensure players can change them. For example, we cannot rely on a fixed unit strategic value, as any change to that unit will require precise update from the moder to ensure a modified or a totally new unit fits within the frames of the system. This will not be so bad when those units will have their value calculated from some clear formula rather than creative guess work.

An example of a specific issue with a unit and its inner workings is the hydra. In the original, the hydra was behaving like 9 units, where each unit was its head. This unique behaviour required a lot of custom work and altering in many systems just for this one instance, therefore, we decided to go with finding similar power and effect for a single figure creature. Our hydra is now a single figure that has the battle value of 9 units. This change impacted the way some spells would affect the hydra, like spells that raise stats/buff per unit, but then the single unit has more health points and better defence on its own, and so it remains fully battle worthy for longer. As you can see, it’s a trade off, but  we hope it will work out well for the hydra and other such things.

Q: Will there be multiplayer in Master of Magic, or do you have plans for MP in the far future?

The plan is for Master of Magic to remain as a single player game.

To answer the second question, we currently do not have any plans for multiplayer at the moment. This may change in the future of course, as there will be a lot more development and additions to the game, but no such plans right now.

Q: What things will be possible with modding?

The inner workings of the event editor. (Work In Progress)

One of the things that are already implemented in terms of modding, is the event editor. The tool will be available from the game’s menu and will allow players to modify and/or add entirely new events into the game.

As for the other moddable features, driven by xml-based databases, players may modify a large number of the game’s functionality via easy to use text editors. Some examples of things you will be able to mod:

Apart from the database, players with more technical skills may look into exposed c# scripts that the game uses to make decisions in many areas. For example, “BattleAIScripts“ allow modders to change the way the AI makes decisions during battle, how it handles spell casting, unit movement and decides when to shoot, when to attack and when to run.

Other script files handle spell, skill or enchantment functionalities, including those that estimate their value for the AI and the scripts that are used when an effect is applied or removed in the game.

Q: What are the post launch plans for the game?

There are no post-launch plans that we are ready to discuss. Much will depend on how things go. But of course we have ideas on features and content we’d like to play with given the time and opportunity.

Q: Once the base game is out, do you plan to make any balance changes for any expansions you might make?

Balance changes aren’t necessarily something we would plan for after the release, we tend to aim at having good balance when we launch, but... Of course we will support and fix any issues post launch, and yes, balance changes may indeed be required if new features appear. But these are not things that are part of any larger plan right now.

Q: Will the unpopular Wizard artwork be redone? 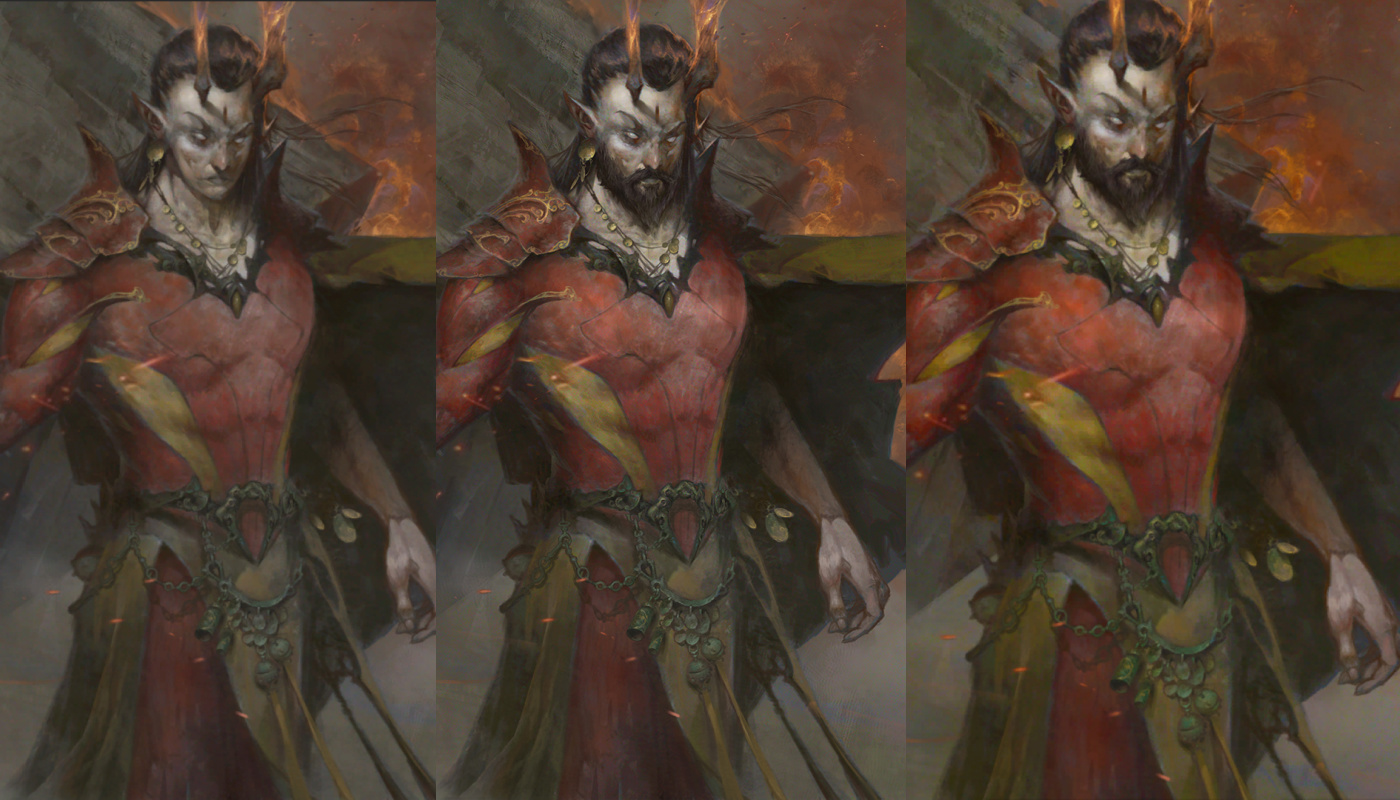 Evolution of Tauron: a) beardless and toned down; b) bearded but still toned down and c) bearded and more vibrant.

While we try to avoid the pitfalls of changing things that are unpopular before the game is out, we do listen and when we judge the change possible/cost effective and/or important, we do it. That being said, you should not expect the Wizards to get any major makeovers (except for one, that we cannot confirm yet, but we may redo if we can).

As an example of this, this is how Tauron got his beard back and why we tweaked the colours for the Wizard art (more on this next month), in accordance with community feedback.

Will diplomacy be improved?

Yes. Diplomacy in the original game was complex, but it was mostly suffering from a very large number of issues and bugs. We aim to recreate the system, but of course also fix it.

Some parts of the old design simply do not fit in the new system (for example, we cannot make a list of spells that wizards react to, as it will collide with modability, or rely on all values available from materials we have, as it's likely that some of them are blind shots or simply incorrect) and will need changing.

We try to use later patches of the original game, as well as mods, as indicators of how the original design was meant to work as well as how the community would like it to work and we tried to navigate our own design with these in mind.

Will battle still be square or hex grid? How does battle work?

Hex. Battles are another area that I will cover in future dev diaries.

Release date, date for the beta?

Release dates and beta dates are, alas, still to be confirmed. But, we will have a beta open to our fans. It will most likely start off small and then grow. I will inform you as soon as we have a firm estimate on the dates, but we are aiming at very early 2022 for the beta. Watch this space!