Field of Glory: Empires developers didn't rest on their laurels. As previously anticipated, the next big thing about Empires is the Diplomacy Update, designed to enhance greatly the way the game makes players and AI kingdoms interact through diplomatic efforts. You won't have to wait any longer as today it is the day. 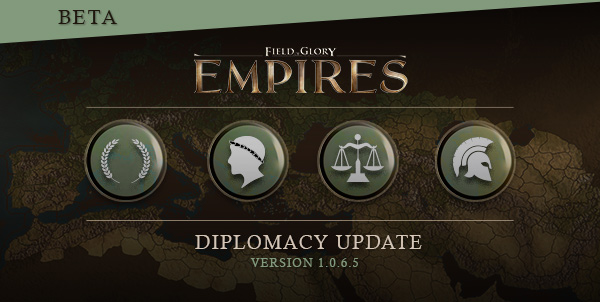 Since this update is significantly massive and would probably affect the overall balance and gameplay mechanics in multiple ways, we opted for releasing the Update as a public Open Beta. Everyone willing to help us with feedback and thought is very welcome to download it and to try it.

The update is a separate installer, meaning that it will be like downloading a separate game, so no one will be forced to play with the Update in place if that is not his intention.

The Diplomacy Version can be downloaded in the members area section accessible through the "My Page Area". We have created a dedicated sub-forum thread here.

But how the new Diplomacy system work? What are the new features and mechanics that would be added in the update?

I – Legitimate ownership
Now when you are at war and conquer a region, it is flagged as ‘war-occupied’. It means that if you were to make a peace which returned the original regions to each side you would also cede back the conquered region. Said differently you no longer instantly gain regions you conquer in a war; it must be claimed during the peace negotiation.
Note that during a peace deal, you can also ask any region owned by the opposing side and are not restricted to demanding just what you managed to conquer.

Warscore is used as the currency when settling peace.

When a side wants to settle peace, and once you have clicked on the ‘Peace’ button, a new panel will open showing you the current warscore (although you can always see this from the main diplomacy interface), the stance you are adopting in the negotiation and a list of possible clauses.

If you are winning the war (positive warscore), you can ask the defeated to give, relinquish or accept clauses for your benefit. There are 12 possibilities so far.

If you are losing the war (negative warscore), then you can only cede items (including regions). You can’t bargain and ask for a few things while mostly giving away other items.

As you ask for items, as the winner, your warscore allowance will reduce towards zero. In turn, you’ll change stance progressively, as you are demanding more and more things. Initially, you’ll be set in a Generous or Conciliatory stance, but it can shift to ‘Extorting’, if you are pushing the limits.

There are two interests in staying within a not too demanding stance. First, the acceptance chance by the defeated is much bigger. Second, this will have a profound effect on the new relationships between you and the vanquished. If you don’t care they hate you for a long time, then try to pressure them to the maximum. But if you want the peace to be a long lasting one, then you might want to stay with a conciliatory stance.

Once you are satisfied with the items requested or given up, validate the treaty. There will be a one turn delay before the other side sees it, and then another turn to receive their answer.

There can be 3 kinds of answers
Yes, No, Counterproposal.

The first two are rather self-explanatory. As for the third, it means the other nation perceives some interest in your proposal but is not quite satisfied with some entries. The counterproposal issued, if you accept it, will be the final Peace Treaty.
If you disagree with the new terms, you too have the options to say simply No. Or to issue another counterproposal.

IV – Transaction Treaty
The transaction treaty is very similar in concept and in format with the Peace Treaty. It can be issued between two nations which are not at war. Here too, you have to play with a currency, which is not the warscore, but ‘Bargain Points’.
The main difference compared to a Peace Deal is that in this transaction, or trade, both sides can ask and give at the same time. So this is a rather free-form deal, where you can give away a region, in exchange of some gold and … why not, some war elephants?

V – Possible Clauses
There are twelve possible clauses. Most can be used in both treaties, but some are restricted to only one type. (T) means it is only available in a transaction treaty while (P) means it will only be available in a peace deal. If nothing is indicated, both treaties support the clause.

Client-State: The nation becomes a client-state of the other nation.

Cooperation Treaty (T): As part of the transaction, add a cooperation treaty.

Alliance (T): As part of the transaction, enter a mutual alliance.

Ask (or Give) Money, Metal, Manpower: A straightforward clause where you ask (or give) one of the three.

Humiliate (P): This will cause a loss of legacy, and a portion of the lost points will be received by the requester.

Regions: Cede or give a region (or several) that you legitimally own.

Province: A convenience Clause that will add at once all possible (and legit) regions of a given province.

Units: Provide or request special units. The other side doesn’t have to have the actual units in his army but he needs to be able to produce them. Only provincial units and a very few special units can be requested. There will be an extra fee of 75 Money per unit to be paid by the gifter, so as to cover recruitment and transportation cost (abstracted).

Disband (P): Accept or demand the other side disband part of his army or fleet. The cost will vary with the size of the enemy military and the percentage to disband. Units will be disbanded randomly until the required percentage is reached.