A new Field of Glory 2 Christmas tournament is upon us. In this challenge, you'll have to fight 3 important battles that could have occurred in 1 AD

IMPORTANT. You do not need to own any DLCs to enter. Anyone who has Field of Glory II can join the tournament. 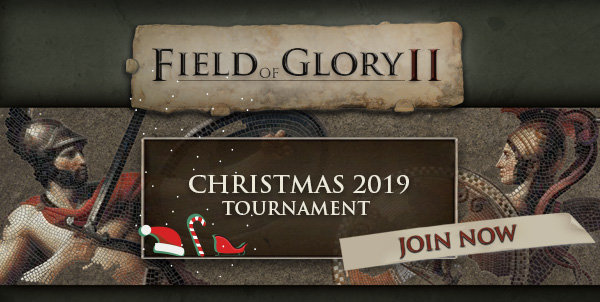 To enter, go to the tournament page here:

The general tournament rules can be found here:

The first round will commence on Monday 16th December 2019 at 10.00 am GMT. No further entries can be accepted after the tournament has begun.

This tournament will involve three rounds. The battles will be medium-sized custom battles, all set in the year 1 AD.

First-round pairings will be selected randomly, subsequent rounds using the Swiss Chess system. Nobody will play the same opponent in more than one round.

Each round will last 14 days.

Any battles that are not completed by the end of the round will be timed out. The player who has had the game in his “My Turns” box the longest overall will be the one who is deemed to be timed out. This will not normally incur any penalties, unless insufficient turns have been played: If the timed-out player has played less than 12 turns, his score will be reduced proportionately, and his opponent will be granted the BYE score if it exceeds his current score. If the timed-out player has played less than 6 turns, he will not be included in the draw for the next round. This is to prevent someone else’s enjoyment being spoiled by being drawn against someone who has apparently dropped out of the tournament.