As the frontlines began to solidify on the Western front, the sheer concentration of men, trenches, and limited maneuverability made significant advances next to impossible for both sides in the years following 1914.

While the battlefield difference-maker that would be the Tank was still a few years away, in the interim both sides invested heavily in artillery, gas and shell production, while circumstances forced them to rethink the art of launching an attack.

Softening up a target, concentrations of force and the bold mission of sending the cavalry through if a gap was made in the enemy’s frontline were all to be tried in the years ahead.

To this end, Strategic Command World War I offers several key game play mechanisms to help model the necessary developments that were eventually needed to help break the deadlock in Belgium and France.

In Strategic Command World War I, Artillery represents concentrations of heavy artillery, and it will be important to conduct research not only to improve your Artillery, but also in Gas/Shell Production.

While Artillery research will improve the effectiveness of your Artillery attacks, Gas/Shell Production will speed up the delivery of shells to your Artillery units. This will enable them to stockpile shells more quickly, and this will be critical for launching concentrated attacks leading to breakthroughs into and beyond the enemy frontline.

Reconnaissance bombers will also be important as their main role will be in spotting for the Artillery. The information they feed back to the higher command is then used to help direct the fire of the guns.

Therefore when launching an offensive against entrenched enemy units it is best to:

• Target the enemy unit with a Recon Bomber (ideally with a Fighter unit nearby ready to act as escort).  Once targeted, it will appear with a red hex outline on the game map.

• Then bombard the enemy unit with your Artillery, as your prior reconnaissance will make your Artillery fire 50% more effective.

• Attack with your ground units.

• If the enemy unit is destroyed or retreats then consider sending a Cavalry unit through the gap that has been created in the enemy lines. German infantry, artillery and cavalry are all in position for a concentrated attack on the fortress of Verdun. 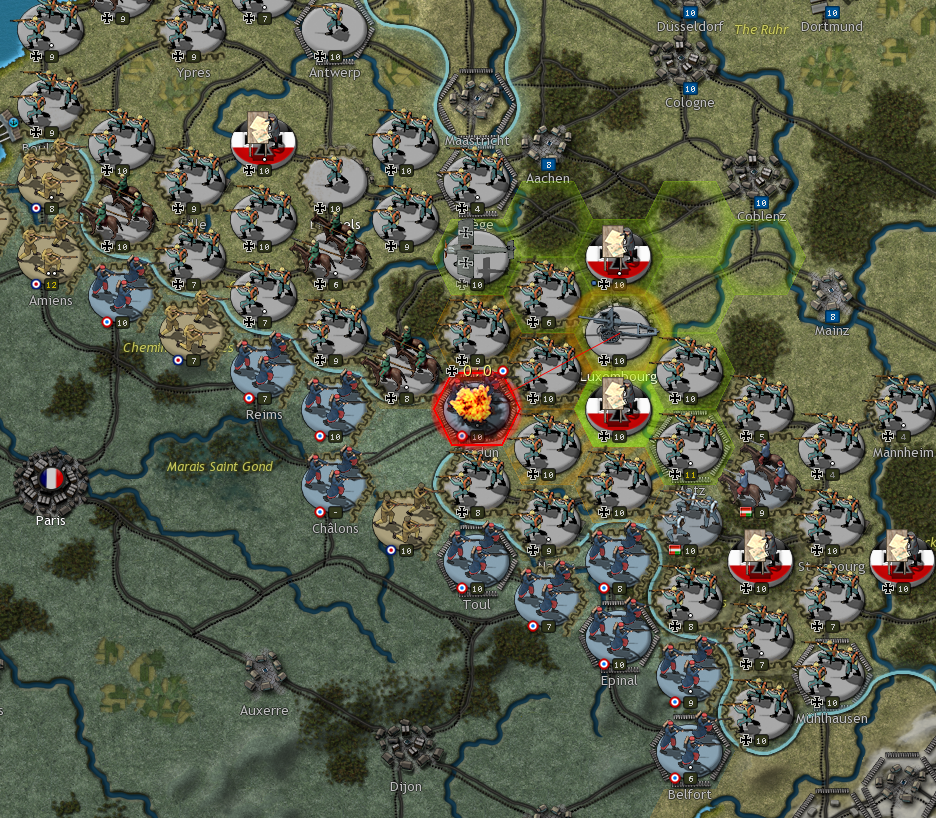 Infantry on the brink of a breakthrough at Verdun.

Further developmental achievements will help too, such as equipping your troops with better Infantry Weapons and doctrinal improvements in Infantry Warfare and the Command and Control of units. Not forgetting of course research into Armored Warfare and the introduction of Tanks.

But even with these improvements, the effective tactical use of your Infantry, Artillery, Recon Bombers and Cavalry will make all the difference between victory, defeat, or continued stalemate on the Western Front.