Command: Modern Operations is coming soon. In this piece, let us take a closer look at some of the major new features integrated into the new editor. Read the preview article below. 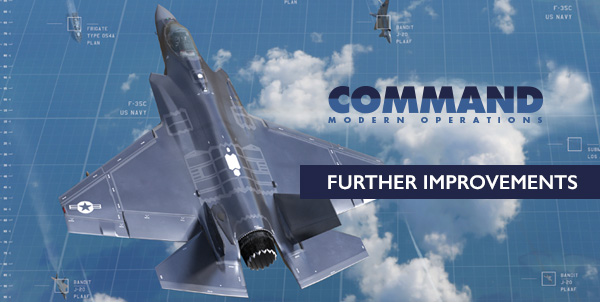 Turbo-charged for your pleasure

One of the most immediately noticeable features, especially when running large or elaborate scenarios, is the jump in performance. Command now offers both greater absolute speed in simulation execution (ie. reduced “pulse time” as displayed when the “Show Diagnostics” option is enabled) as well as significantly increased CPU utilization, as a result of improved parallelism. Maximum practical unit count has also increased thanks to better memory management, with the result that even more, massive scenarios are now feasible.

As we previously mentioned, it was decided to merge the previously DLC-locked features of “Chains Of War” to the core simulation available with Command. We’ve covered these features extensively before, and we included cargo, amphibious and airdrop operations on our previous article on ground warfare, so here is a short summary of the others:

One of the benefits of absorbing the COW features is that now we can freely use them as building blocks for additional functionality, inserting features 7 mechanics that would previously require some non-trivial Lua elbow grease. Realistic sub comms are one such example.

When this feature is enabled, submarines who go below 40m depth go off the communications grid. As in other cases of comms disruption, they are no longer under direct player control, and only their last reported location is available. The player can, at any time, send a “bell-ringer” ELF signal to a no-comms submarine to recall it to re-establish comms (right-click on sub icon, click on “Summon to re-establish comms”). The sub will attempt to rise to shallow depth to rejoin (this may not be immediate, as it will try to evade nearby hostiles). Once it rejoins, the sub will share its contact updates with its parent side.

Never stray from the path

One of the more persistent problems of CMANO’s navigation AI was that its pathfinder was binary-based: Either a spot was passable by a unit, or it was not. This resulted in a tendency in units to aggressively cut corners in their plotted paths in order to travel to their destination as efficiently as possible, sometimes coming dangerously close to shore or other obstacles. This can result in some unintended “beach surfing”, as this example demonstrates: In this case, the Freedom is placed in the mouth of the Hormuz straits and ordered to travel inside the Persian Gulf. It plots an efficient path — too efficient, as it nearly clips the shoreline at Khasab. There is a possibility that the ship may get stuck on the shore if left unattended. Ships generally don’t navigate this way if they can help it.