The first part of the C: MO Developer Interview dealt with the integration of new software and feature into Command: Modern Operations. Thanks to new terrain layers, new global satellite imagery and 3D vision provided by Tacview (among many other tools) the whole gameplay experience has been greatly improved.

This Second Part, called "Full Spectrum Operations", goes further in detail in exploring how the Battlefield Control has been expanded in all sectors of modern warfare. Feel free to comment in the forum. 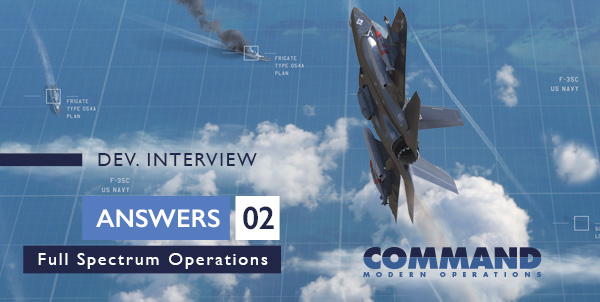 5) Speaking of new terrain types, we noticed that the announcement references improvements in ground operations. We also saw some screenshots with high-res maps with roads and similar infrastructures. Can you elaborate on what’s in store for digital grunts in CMO?

The answer to this first requires, I think, a prologue of sorts.

People sometimes ask us (or wonder aloud) on public fora “when will CMANO get ground ops”. I think this question starts off on the wrong foot. Who is the arbiter of this? What are the criteria? Command v1.x already has ground ops, limited as they are. Call of Duty has ground ops. Medal of Honor has ground ops. Even Quake and Halo and Unreal Tournament have some basic ground ops (people run on foot or in vehicles and shoot at each other, no?). The point being, ground ops are not a binary “have / don’t have” black-or-white thing. There are shades of gray. There are degrees.

It’s possible to put together an excellent game centered on ground forces while ignoring huge chunks of what makes ground ops work in real life. Some examples easily spring to mind. Where are logistics, attrition replacements, political factors/events, theater intelligence and TBMs in Armored Brigade? It doesn’t need them, because it’s a tactical game and a superb one. Where is the detailed nuts-and-bolts ground combat in TOAW? It doesn’t need it, because it’s an excellent operational/theater game. So the threshold for considering a game as “having ground ops” is not “it has feature-XYZ that I personally deem essential”, but instead “it has the features necessary to model the aspects of ground warfare that it aims to model”.

Command has always viewed ground forces as another element in joint & cross-domain operations, with a primary focus on how they interact with air, naval & strategic assets. This focus remains dominant in CMO. I know it has become something of a cliche to view ground units in CMANO as “just there for ships and aircraft to shoot at”, but these are nothing like ducks in a shooting gallery: these ducks can wreck your fleet, wipe out your airforce both in the air and on the ground (the old NATO grim joke “the best Russian air superiority fighter is a tank sitting on the runway at Bitburg & Ramstein” is ever so true in Command) and of course also clash among themselves.

Now, to the actual question. Let’s jump directly to the key improvements we have put together on this aspect in CMO.