Welcome back for another Astra Exodus dev diary. Today we are going to talk about  artificial intelligence in the game, but more specifically on the mechanisms the different factions play differently as well as the many effects difficulty settings have. 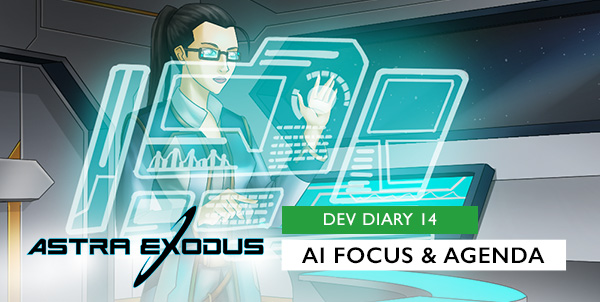 Focuses
One of the core features of the AI system is the Focus for each faction, which determines to a rather large degree what the AI will build and when. This is done internally by affecting its desires accordingly and thus greatly affecting its decisions each turn. For each Faction, the game has 3 different focuses, with a 60/20/20% chance of them being chosen each game. In total there are seven focuses in the game: Militarists, Technologists, Ecologists, Industrialists, Expansionists, Economists and Balanced.

The Militarists focus will obviously center colony production on combat starships and ground troops in order to maintain military supremacy over its rivals. Technologists will target research, maximizing its output through building installations and increasing the number of scientists. Ecologists will aim at having large populations by terraforming worlds into Terran planets and also maintaining a low pollution level. They compensate any production lost by generating more income through taxes and commerce. Industrialists are the total opposite, they will focus on industrial production regardless of any pollution and colonize planets with a high mineral output; regardless of their habitability. Expansionists are not picky at all in contrast, they will focus on colonizers and constructors as long as possible with the goal of settling all planets in range. Economists concern themselves more on commerce, taxes and trading. They usually generate a high income quickly, purchasing instead of building most colony projects. Finally, a Balanced focus will make the AI not center on anything in particular. Instead it’ll be more reactive, responding mainly to other player actions. Agendas
In contrast to Focuses, Agendas mainly affect how factions conduct diplomacy and what victory conditions they go for in a skirmish mode game. Just like with Focuses though, there are 3 possible different agendas per faction, with a  60/20/20% chance each of being chosen. There are 7 possible Agendas in total: Ruthless, Aggressive, Pacifist, Honorable, Xenophobic, Manipulative and Erratic.

An AI with a Ruthless Agenda will be quite dangerous, it will attack without provocation and be willing to sacrifice both its own troops and alien populations in war. In contrast, an Aggressive Agenda is more measured, as it will attack only when in favorable position and with at least some provocation. As radically different to the previous two, a Pacifist AI will try to maintain peace, by proactively managing Relations, Trust and Threat it has with others. It will also of course sue for peace more eagerly if at war. A more sensible Honorable AI will almost never break a treaty and will not attack faction with which it has good relations. However it will react twice as much when it is the victim of espionage. Xenophobic AIs go against diplomacy in general and they rarely interact with others without being prompted first. They do not always wage war, but when they do, they stop nothing short of genocide. In contrast a Manipulative AI will often interact often others, preferring to use trading and espionage to achieve its ends. Finally an Erratic AI Agenda, as the name implies, will make the faction rather unpredictable; as it will switch between all other agendas randomly throughout the game.

Preferences
The final core AI system is the one that sets the preference for starship roles, troop types and battle tactics for the faction to use. In this case there are two choices, with a 50/50 chance of any of them being picked at game start.

For ships roles we have 4 different preferences: Light, Balanced, Average and Heavy. Light will focus on Frigates/Destroyers, Average on Cruisers and Heavy on Battleship/Titans. A balanced approach will make the AI ignore this as a factor when deciding what to build.

With troops we have again 4 preferences: Soft, Hard, Mobile and Balanced. Soft will make it focus on Infantry/Airborne, Hard on Armor/Mechs and Mobile on Mechs/Airborne. Finally, as well as with ships, Balanced will make the AI ignore this when deciding what to build.

Regardless of what starship focus the AI picks, starships need to be fitted with modules and be built as proper ship designs. This starship design is made by the AI thanks to the battle tactic it has chosen to follow in space. These can be: Long Range, Close Support, Fast Assault, Missile Swarm, Balanced, Engagement and Harassment. Depending on which battle tactic a faction chooses then a faction will focus its research on specific types of weapons, defenses, etc to arm its starships with.

Difficulty
There are seven possible difficulties for the game, and can be picked for both the story campaign or a single skirmish game. These are: Colonist, Marine, Captain, Commander, General, Admiral and Elgathi. Without going too much into detail, Commander is the standard difficulty, where the AI has no penalty or bonus to speak of. Thus, the closer you go back to Colonist, the easier the game is and the same in reverse, Elgathi being the hardest difficulty level.

Difficulty levels not only affect bonuses/penalties, but more importantly they affect how the AI plays the game. For example, on General and upwards, the AI will target the weakest enemy first in ground battles. In Commander and upwards the AI will maintain formation in space battles, right up until the main line faces the enemy. In contrast however, a game with a difficulty of Marine or less will have the AI ignore starship abilities and not use them. That’s it for today! We will be back next Tuesday with our last dev diary before release. Astra Exodus is releasing on January 30. Are you ready?