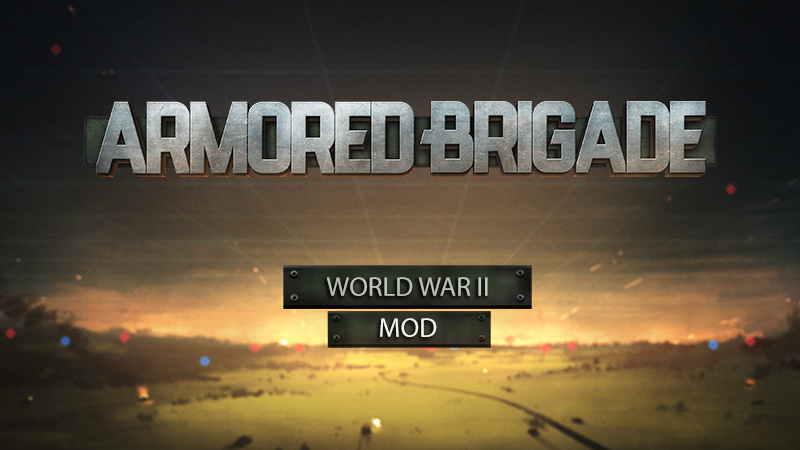 As acclaimed as Armored Brigade is, it takes something really special to make it even greater, and the promising and straightforwardly titled mod “Armored Brigade 1943” by user KarlTaco does just that.

Similarly to the title’s recent third expansion pack Czechoslovakia - Netherlands, and KarlTaco’s previous work Factions Plus with astonishing 13 new non-European factions, AB1943 also delivers fresh armies and battlefields to Armored Brigade’s growing menagerie of content. Unlike the nation pack however, new mod carry us outside of the Cold War, directly to the largest military confrontation in human history: the Eastern Front.

Over the course of four years, more than 400 Red Army and Axis divisions clashed in a series of operations along a front that extended for more than 1,500 kilometres. It was by far the deadliest single theatre of the European portion of World War II with up to 15 million military deaths combined on the Axis and Soviet sides, and the additional civilian loss of life ranging from about 14 to 17 million.

The fighting on the Eastern Front was terrible, incessant and brutal beyond belief as both sides fought with demonic fury. The conflict encompassed the largest armored clash in history (Battle of Kursk) and the most costly siege on a modern city (nearly 900 days in Leningrad), as well as scorched earth policies, utter devastation of thousands of villages and towns, and countless atrocities attributed to both sides. 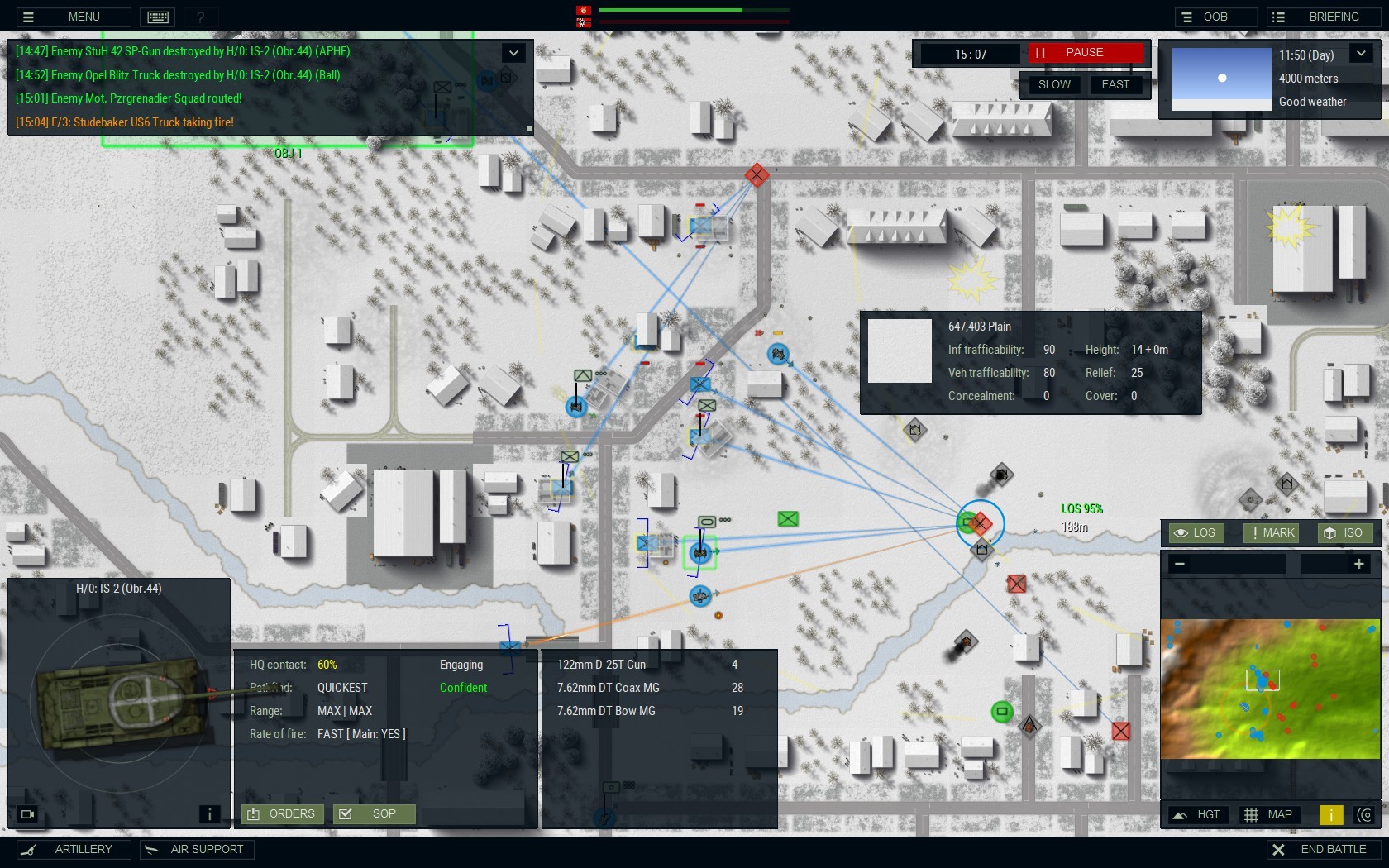 Soviet Guards heavy tank regiments used the IS-2 extensively in the assaults on the fortress cities of Budapest, Breslau, and Berlin. These vehicles featured thick white stripes for quick identification by other Soviet tank crews.

As colossal as the conflict it tries to faithfully portray, AB1943 comes with over 500 unique and accurately researched units and aircraft, and it offers players a reason to play Armored Brigade with a level of quality that makes it easy to forget it isn't an official expansion. In addition to the novel time frame, changes to gameplay and overall enjoyability feels incredibly understated. A particular focus is provided to the infantry combat, more so than vehicle-centric Cold War. Infantry can move slightly faster, and are marginally more vulnerable, resulting in a more dynamic small arms skirmishes. Tanks can now be extremely intimidating steel beasts, if you can only confront them with a handful of satchel charges and flamethrowers, but in turn they are very deficient in vision and range compared to more technologically advanced successors. Radios are less common, especially for Soviet units. To compensate for the sake of the player, all order delays are slightly shorter. 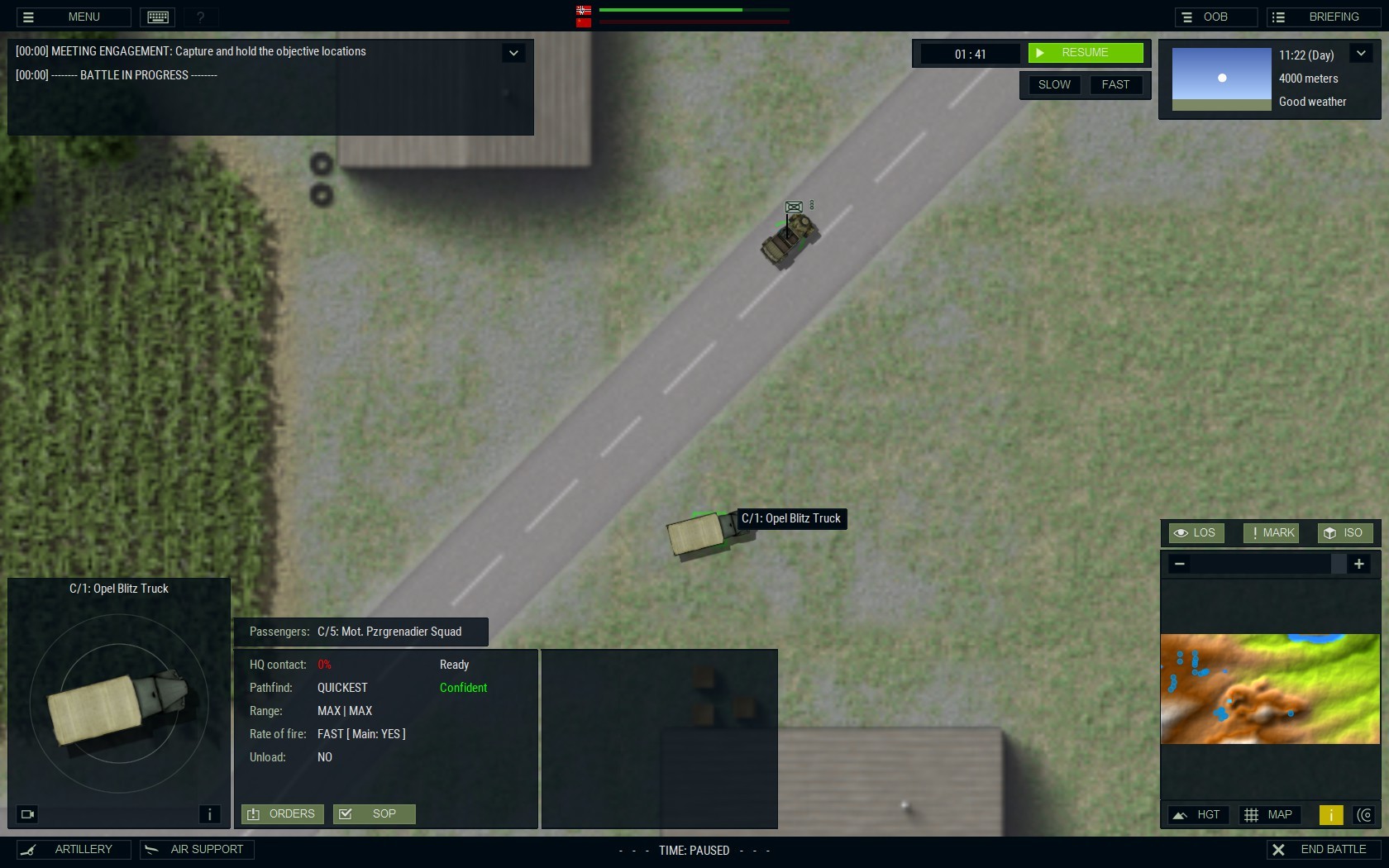 In World War II Germany's doctrine of mobile warfare dominated the battlefield. By trial and error, the Germans were the first to correctly combine the strength in tanks and in mobile infantry and artillery. This integration of mobile units, equipment and tactics underpinned Germany's successes in the first half of the war. As the war dragged on, the Allies sought to emulate German tactics but German armies remained supreme in this type of warfare until their losses had seriously degraded their capabilities.

Another novelty are motorized units, with trucks, jeeps and Kübelwagens. Wartime organisations, individual weapons (including the designations) and their characteristics have all been adjusted to provide an authentic and unique approach to World War Two experience that haven’t been seen on the wargaming scene for a long time, despite an abundance of titles.

The mod currently comes with three factions (regular Red Army, Guards units and Wehrmacht) but more are planned, inclusive of Western Allies. The time span, also scheduled for expansion, currently covers the period from summer of 1943 to the end of the war. Until the autumn of 1942, the German army was consistently victorious. Europe was under the German domination, from France in the west to the Volga River in the east; from the Arctic Circle in Norway to the shores of North Africa. The battle for the city of Stalingrad proved a decisive psychological turning point, ending a string of German victories in the summer of 1942 and beginning the long retreat westward that would end with Nazi Germany's surrender in May 1945. 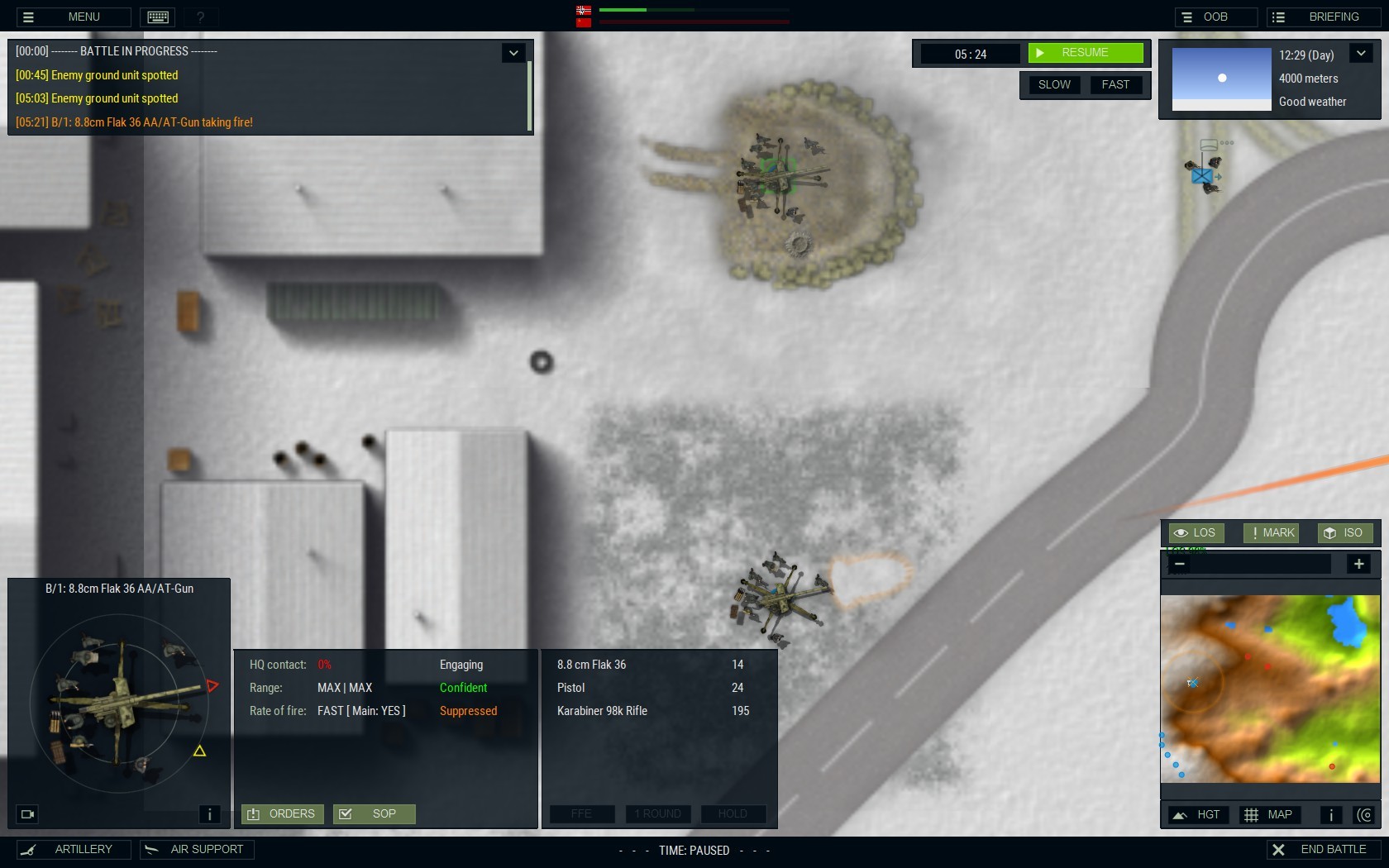 The 88mm Flak 36 was an anti-aircraft weapon that also functioned as a superbly effective anti-tank weapon. Few weapons developed a more deadly reputation, with long reach and lethal hitting power making it a significant problem for every type of armour.

The Soviets also bring a respectable air force and truly fearsome artillery to bear, and so German players have to be careful when committing to an offensive, particularly in the later phases of the conflict. Compared to the Cold War, the battlefield is less lethal and slower paced at long distances, but offsets with brutal and intimately close combat.

Overall, this mod brings a lot of novelty to the Armored Brigade, and it might even tackle the curiosity of those who prefer modern warfare. Being a massive effort, it certainly deserves abundant praise, particularly since it was made by a single man. And I am sure he will gladly accept any feedback or suggestions, which certainly won’t lack given the number of World War Two enthusiasts out there. 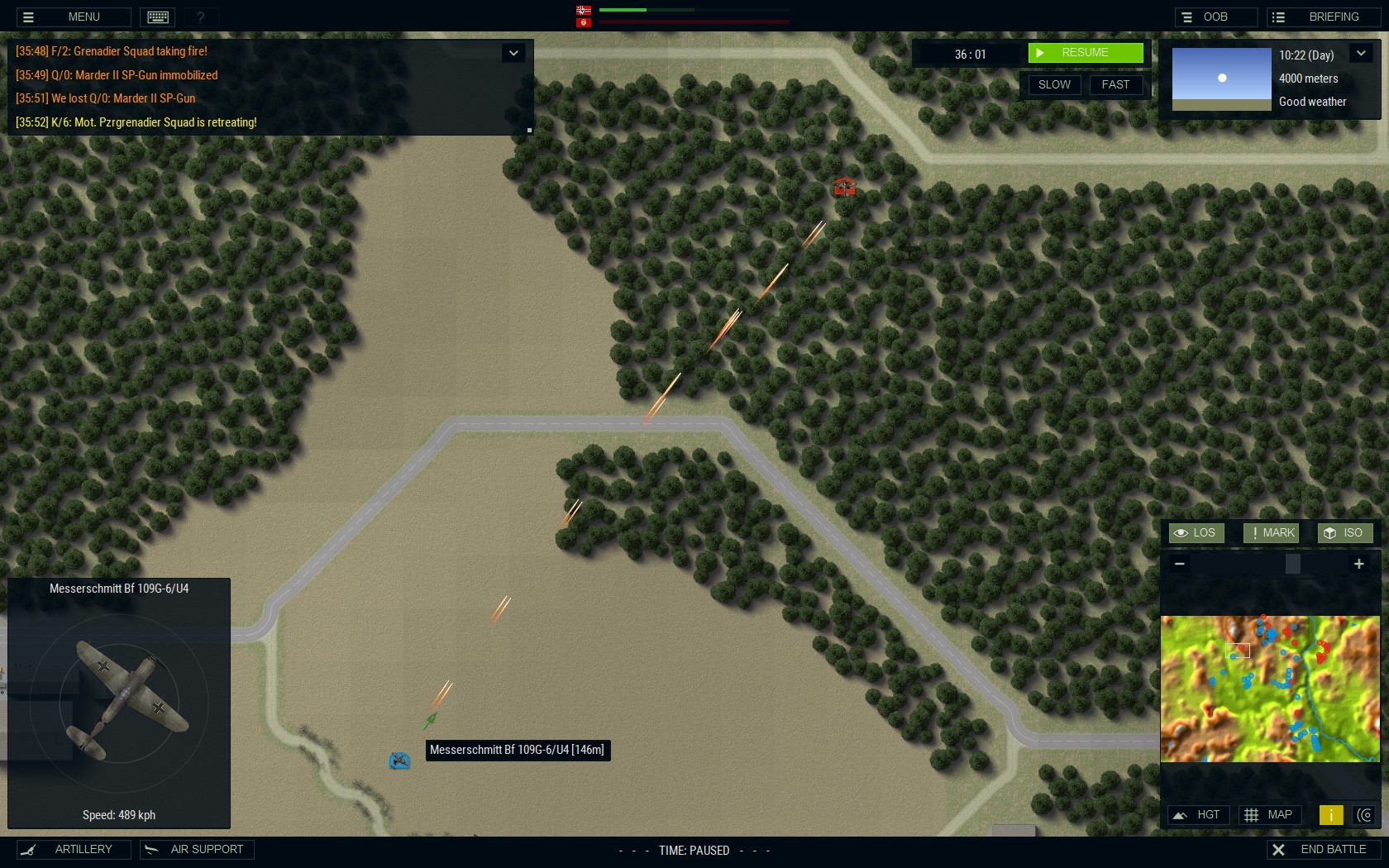