Alien Fauna is coming to life on December 3rd

Alien Fauna is coming to life with the newest version of Shadow Empire and you’ll be able to enjoy it now as is already available for Matrix owners. 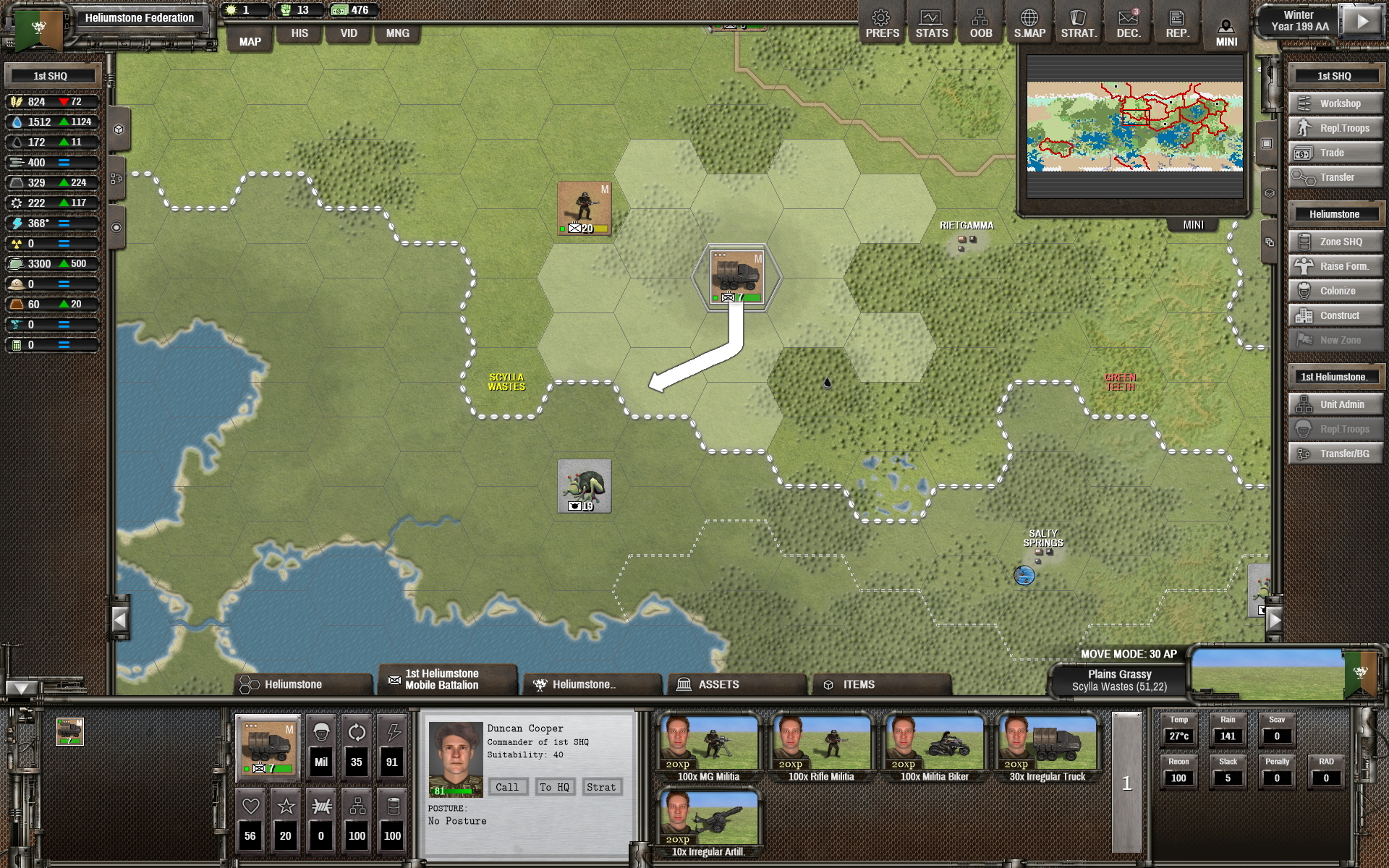 This militia is moving in to push these squid-like "Mungos" out of the way.

There were only around 6 different graphics used to display all the possible xeno-biological evolutionary results in Shadow Empire. Now, thanks to artist Mike Tenebrae, there are over 120 different graphics in different sizes and colours. This ensures that every new alien critter you’ll meet feels new and unique. 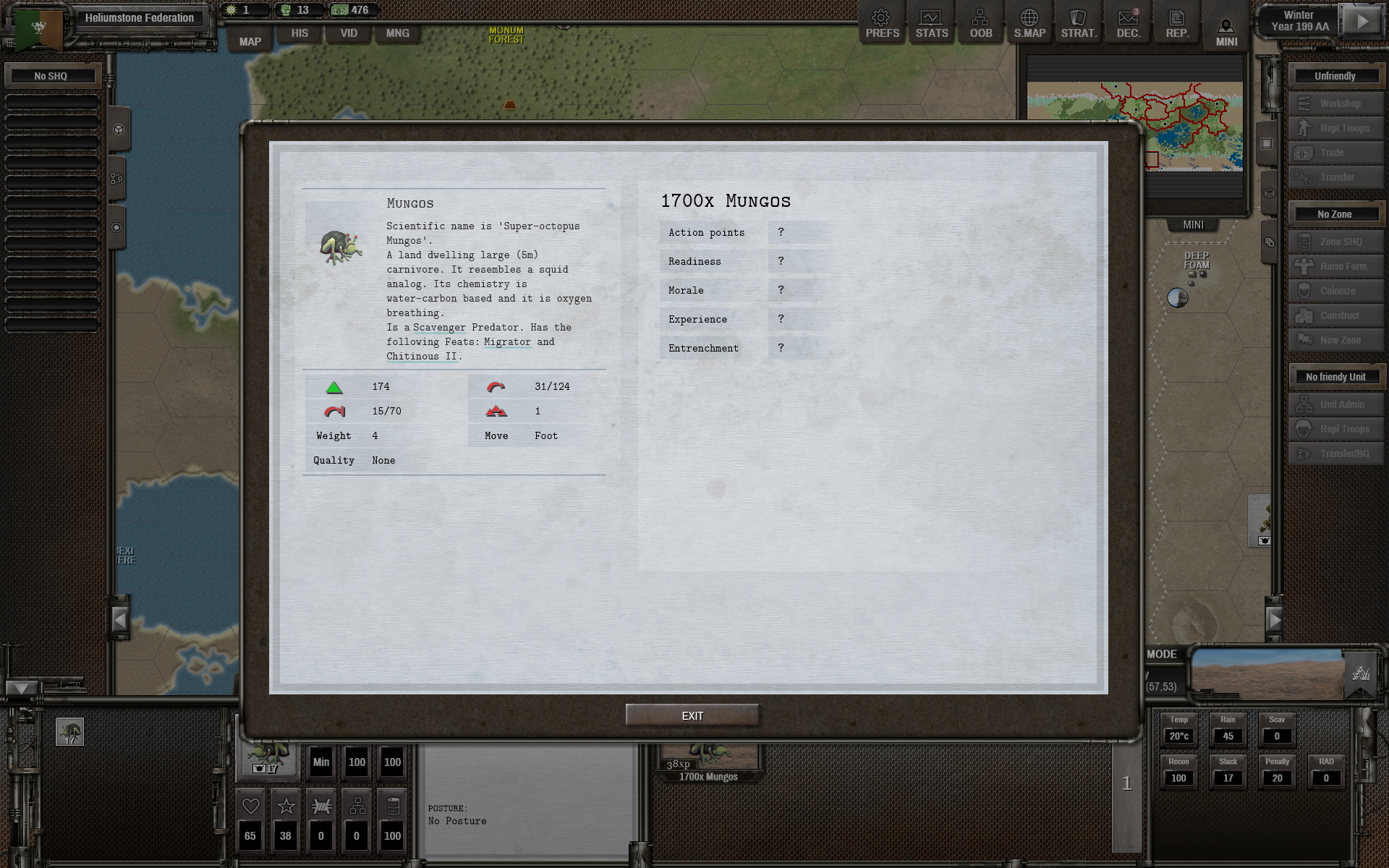 5 meters is tall and with a lot of bulk, combined with chitinous armour these "Mungo" critters will be tough cookies for your militia to handle.

Originally, you could observe some of the offensive/defensive/competition statistics that any potential Alien Fauna had in the evolutionary phase of planet generation. This is still possible, but now these factors are used to assign over 40 different Alien Fauna Feats.  Examples of these Feats are things like: Acrobat, Entangler, Metallic, Swimmer, Killer and Grazer. Most Unit Feats have 5 different levels to allow for even more variety and also for some extremely dangerous lifeforms. 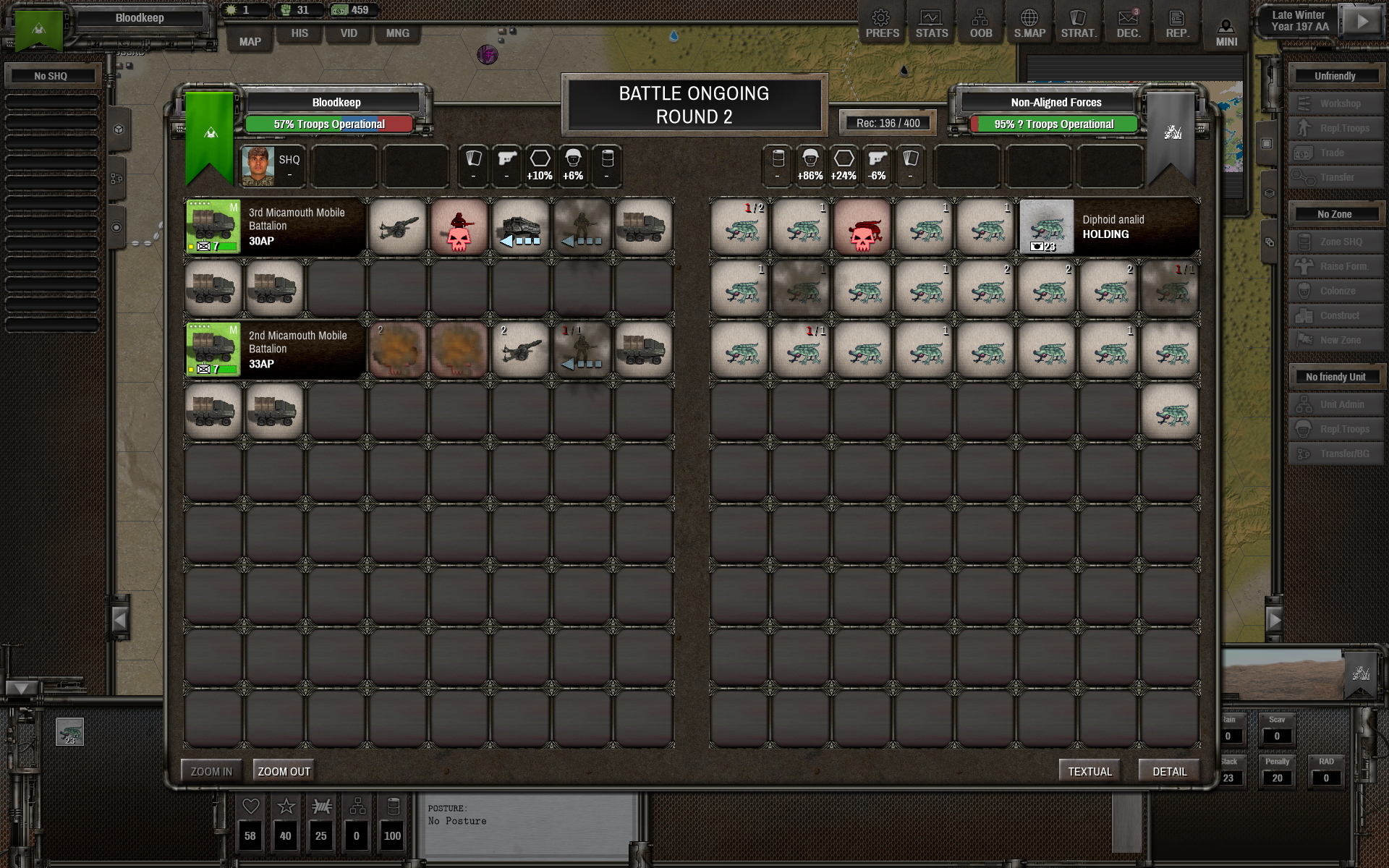 The attack begins on a big group of omnivorous Salamanders

In addition to the new Alien Fauna types, you’ll often but not always find more diverse Alien Fauna species on your Planet. This is due to the introduction of new subspecies generation. There are different variations based on abstract family species. This ensures more surprises. 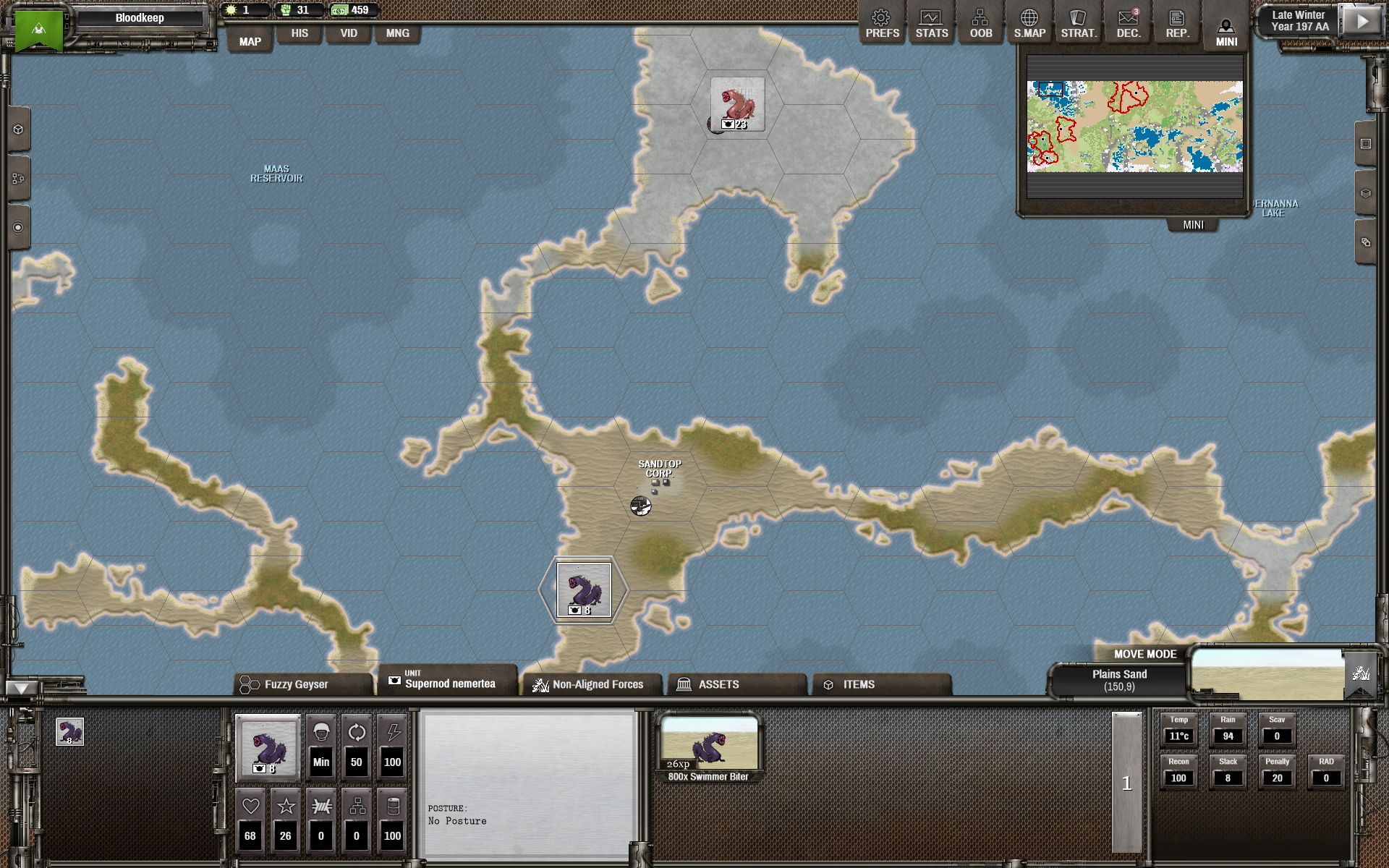 In the north the pinkish and omnivorous Supernod-Allactaga. In the south the more purplish and solitary herbivore Supernod-Periotes. 2 somewhat different subspecies of the same family.

Critters will also have different strengths and weaknesses and more importantly different on-map behaviour. Each Alien Fauna will now have its own area to which they might migrate and from which they might guard from human incursions. Some species might try to avoid you, others might try to ambush you or even start a “crusade” against you. The behaviour depends mostly on Fauna Feats. This means you will be required to think a lot more about how to tackle wildlife challenges. 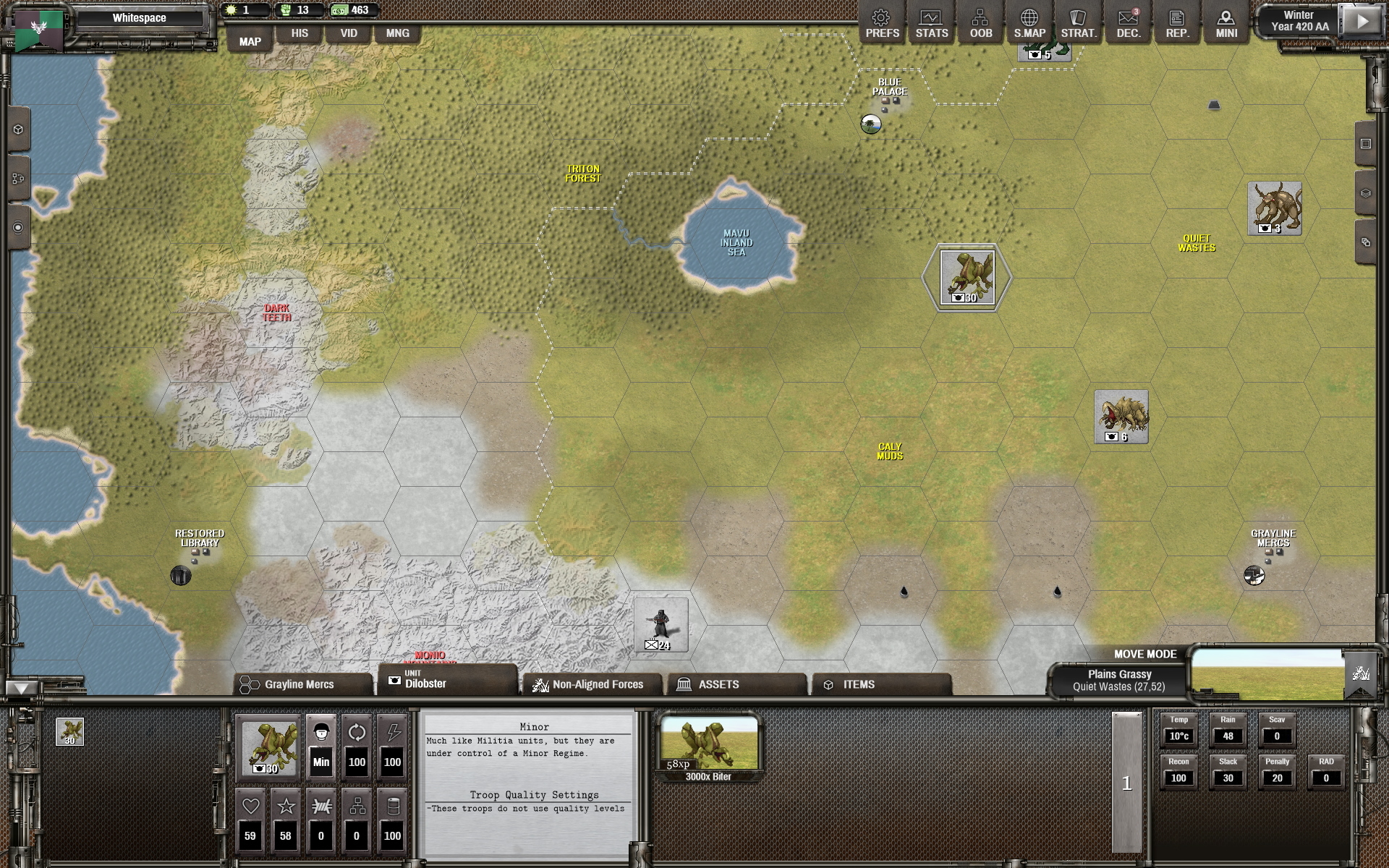 A scary Planet with 20 meter tall monsters called “Biters”. Roaming the prairies in their thousands... some caution is advised...