Update 1.01.07 releases today, and with it five new playable factions have been added to Skirmish mode.

This latest update is the culmination of Atomic Kaiser's relentless work on expanding and improving Astra Exodus. You can find the full changelog below. As usual, let us know what you think, your feedback is always welcome.

If you are on the fence, we are running a weeklong deal on Astra Exodus. Starting later today, the game will be 50% off for 7 days. 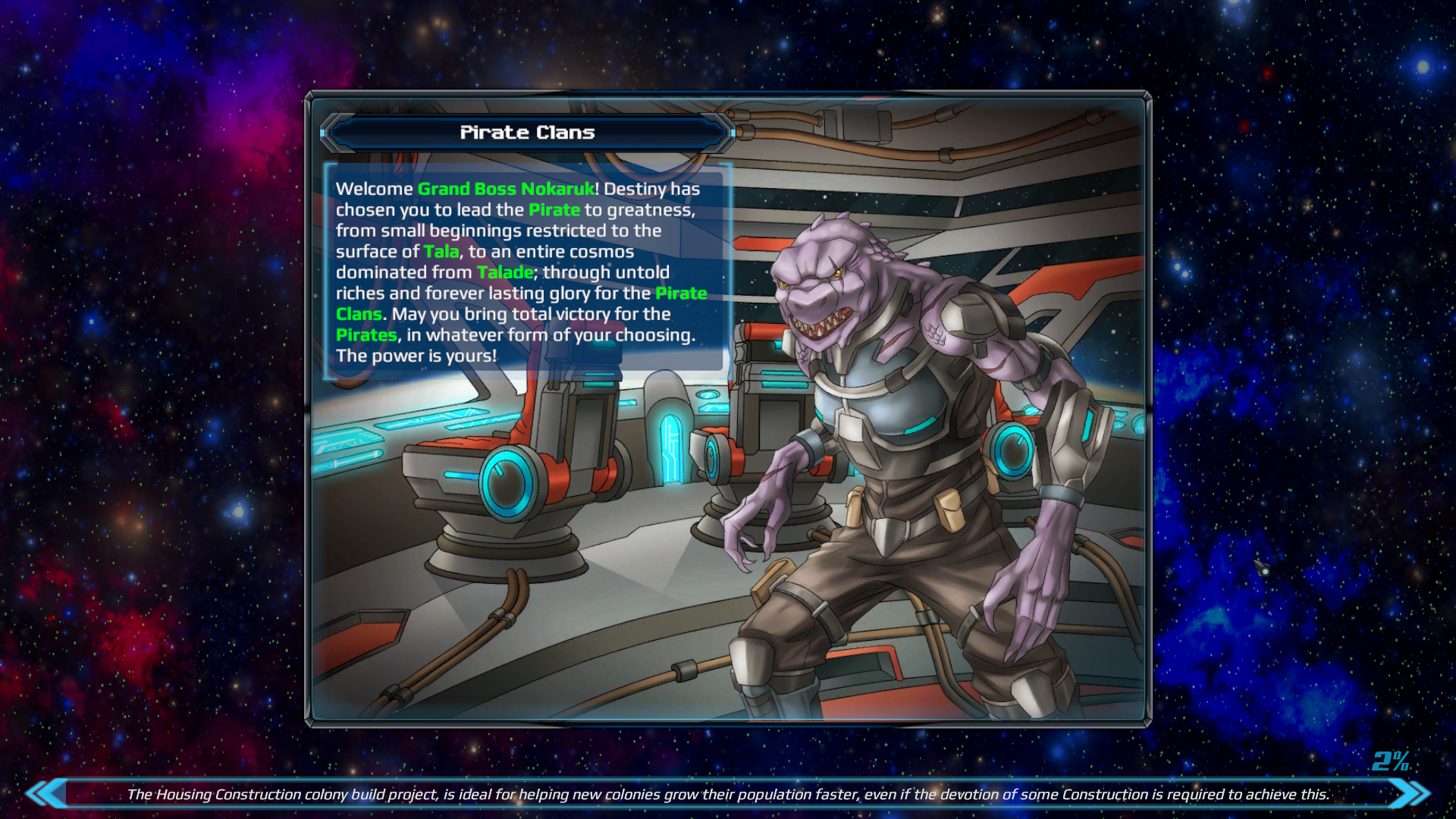 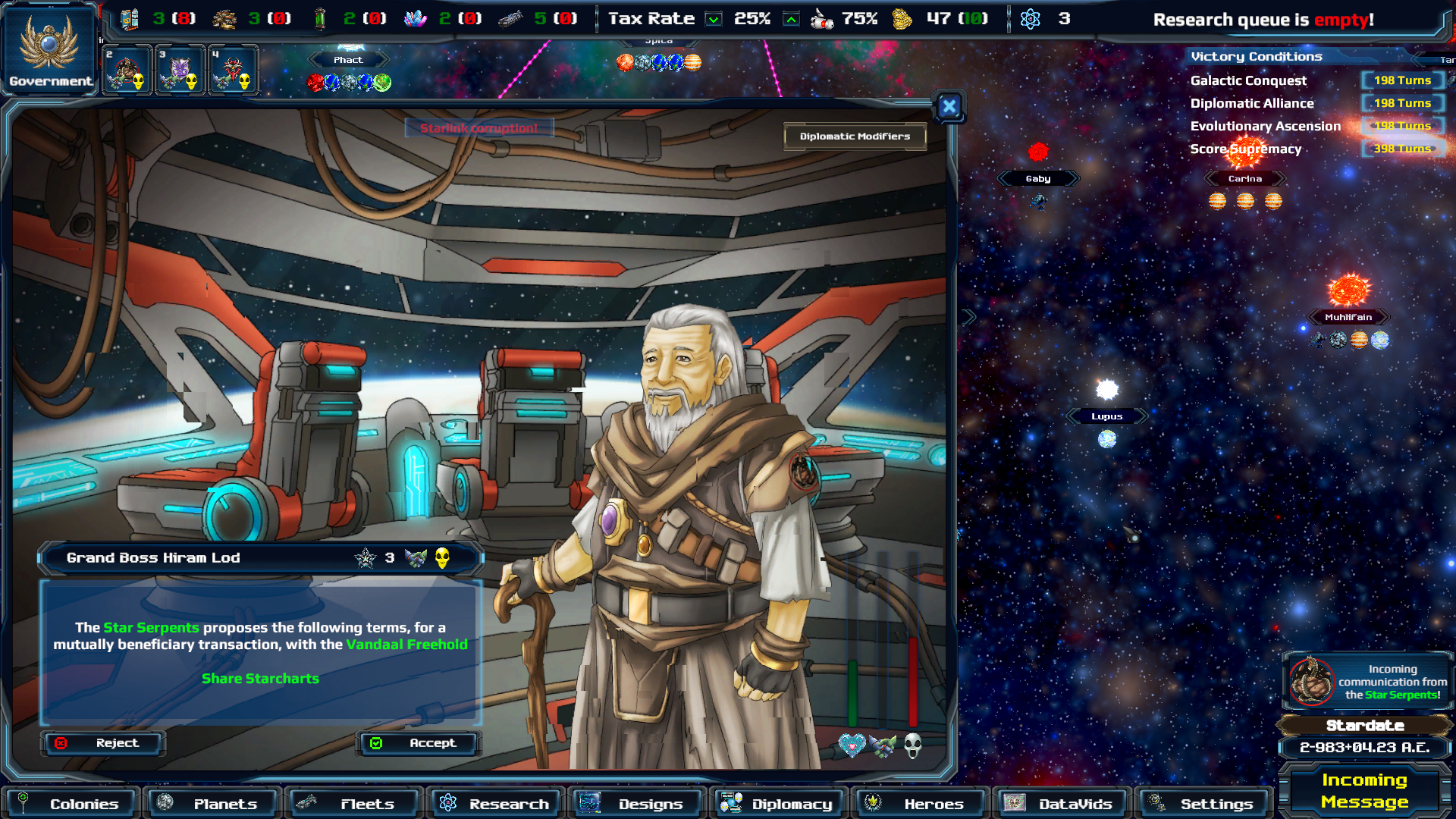 -------------------------------------------------------------------------------------------------------------
+ Fixed an issue in which the starsystem owner would not change, after a colony was conquered through a ground invasion
+ Made sure the AI is always at least a bit aggresive, even in the case of a pacifist AI
+ Made sure that the AI changes victory condition if picked one that was disabled
+ Added an aggresiveness bonus/malus according to difficulty. It is neutral at the default Captain difficulty.
+ Made sure leftover research is taken into account when you trade for a tech you were researching, in order to calculated teh ETC for the next one
+ Fixed a bug related to reserching the last tech in field in a campaign mission, which was disabling the endturn button
+ Increased the max name length of designs to 20 characters
+ Improved the loading speed of the battle simulator
+ Improved the loading speed of the quick designer and in game designer, specially with tons of designs available
+ Fixed an issue with updating the colony list after a project is completed in the campaign, it was simply not happening
+ Fixed a bug when dealing with special techs after loading a save, in which they were being researched but were showing up as unresearched, even when their effects were active
+ Added a description for the ELTF, Vandal Freehold, NeoHuman Imperium, Star Serpents and Pirate Clans factions
+ Added the pirate clans as a playable faction, rebalance its traits and improve it's character graphics
+ Fixed an issue with inverted subject in the Cordial response with the Followers of Kala. It would use the wrong leader name.
+ Fixed some types in advices, crisis and counter tech descriptions
+ Rebalanced campaign faction skills (Expanded Freehold, diferentiated ELTF from Republic and completed Imperium skill poiints)
+ Added the 5 main campaign factions to the sandbox game mode
+ Clicking on a DataNet Notification that a system has been explored now centers the camera/view over that system.
+ Fixed a bug in which when trading techs, the delta left research was added to whatever was left in the queue, enough to sometimes even complete another tech
+ Made sure to remove destroyed players from the factions list, even if you couldn't contact them before
+ Increased the size of the bonus indicators for the profiles list item UI object, so what you get in each difficulty level is more clear
+ Fixed an issue in which finishing the campaign would prompt you to start the mission again after
+ Fixed a bug that was preventing the final capmapign mission from firing steam achievements
+ Fixed an issue with the wormhole gate not registered as constructed in mission 8A, after a file load in the middle
+ Added the min/max opponent setting for huge/gigantic size galaxies is adjustable in the globals.lua file
+ Made sure unarmed ships are not added to any fleet in the battle simulator
+ Fixed several typos in techs and some installations
+ Improved the Camera edges panning offset, since it was getting in the way of the selectiong buttons on the left bottom corner