DLC Tigers on the Hunt: Normandy 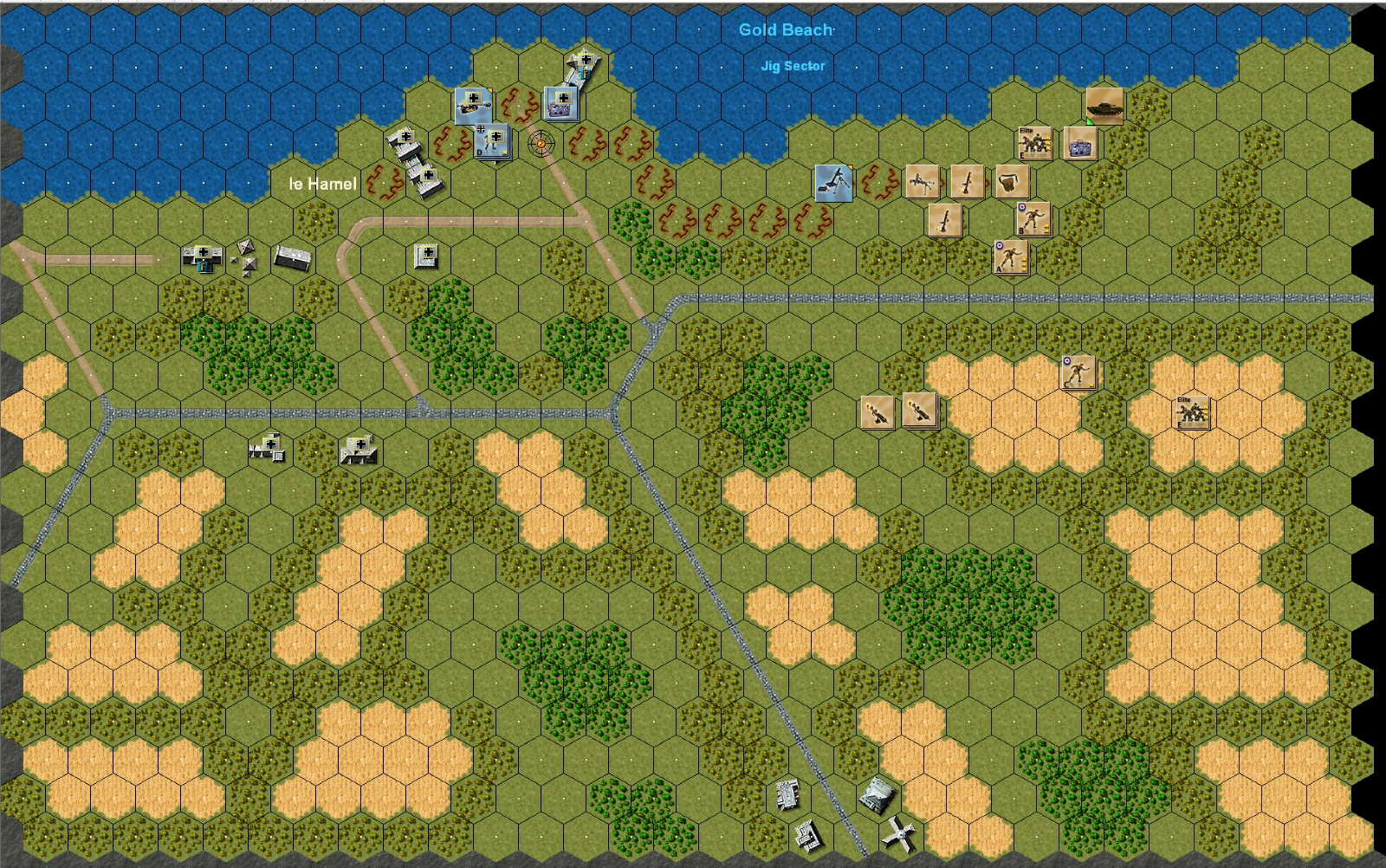 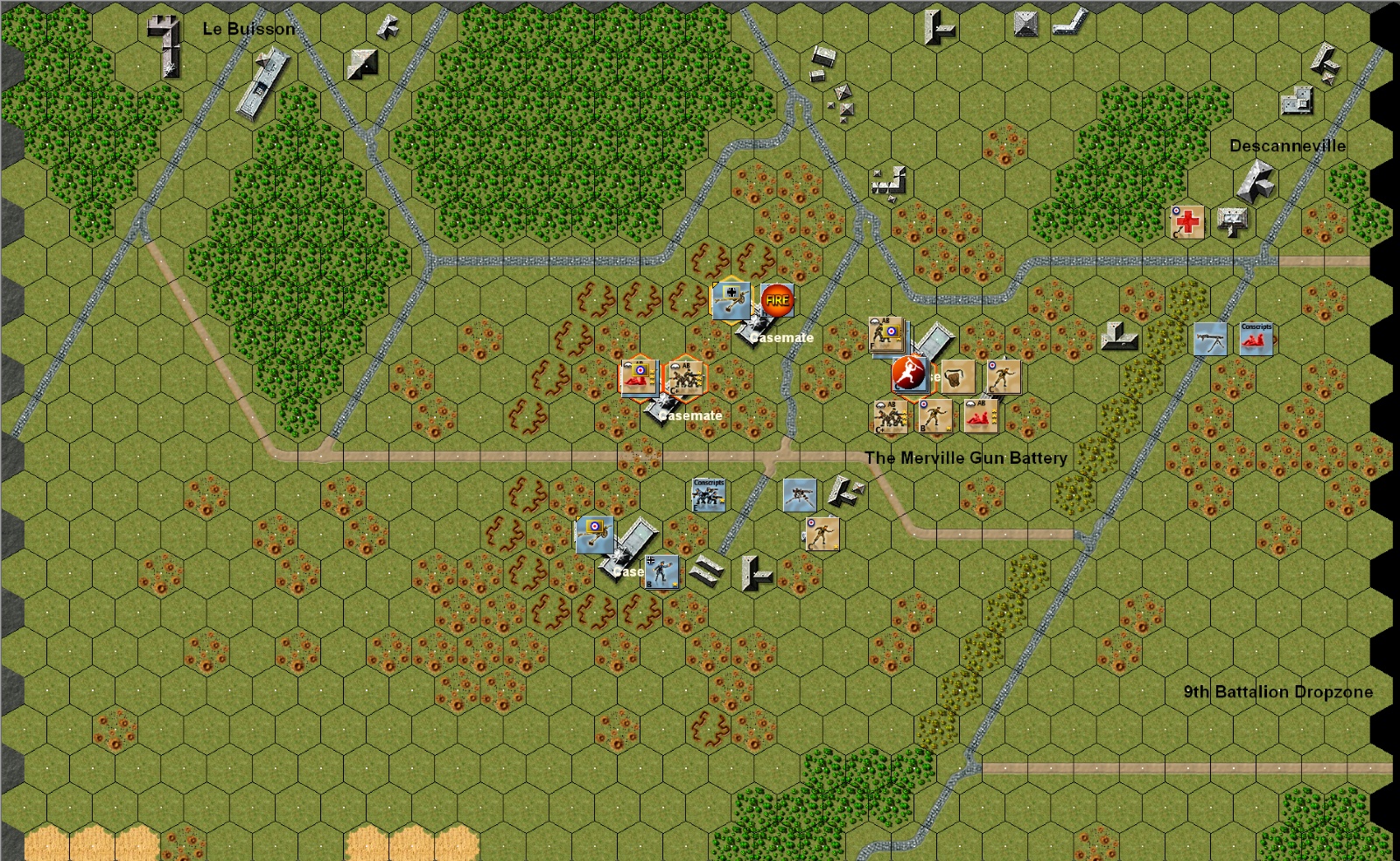 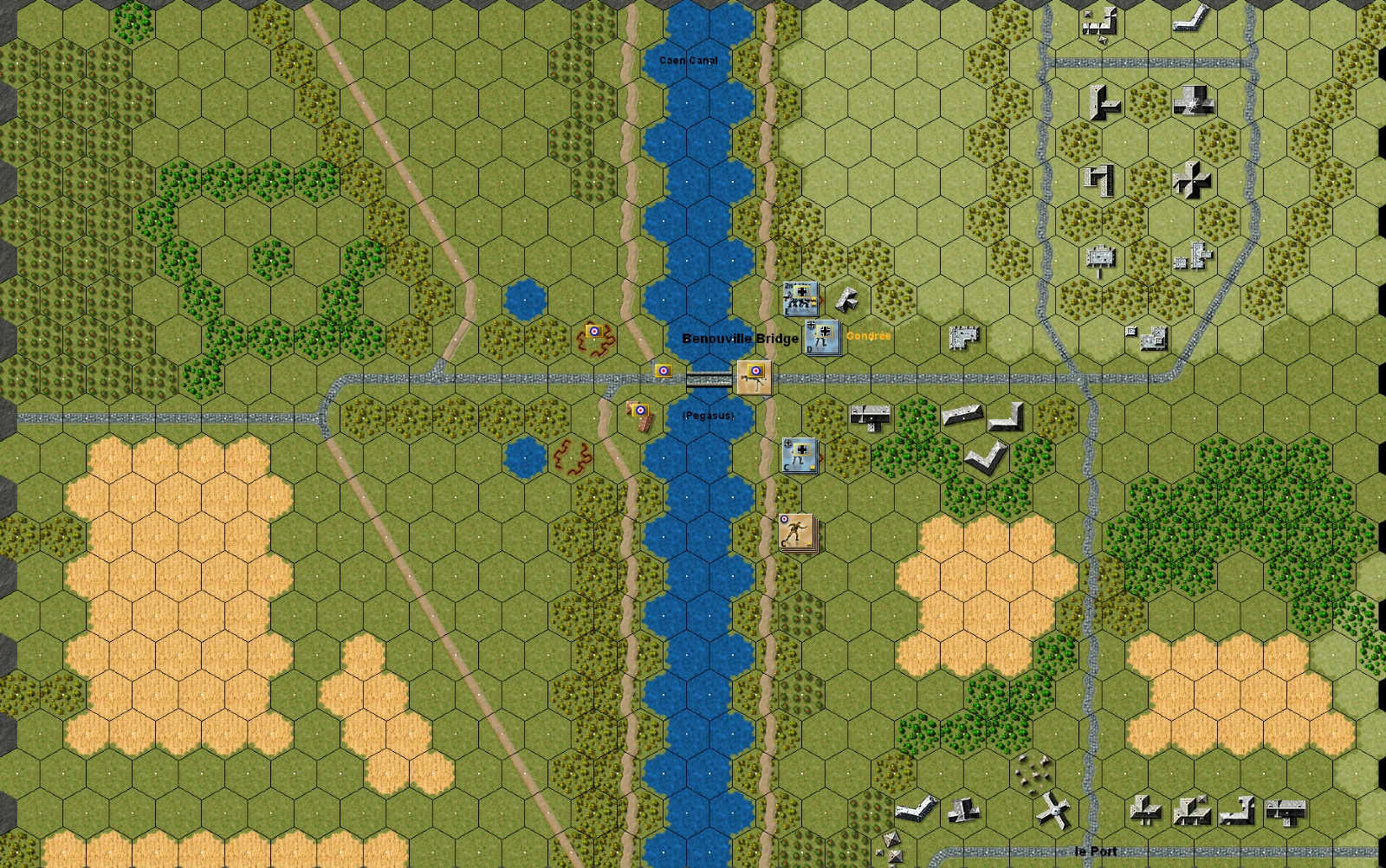 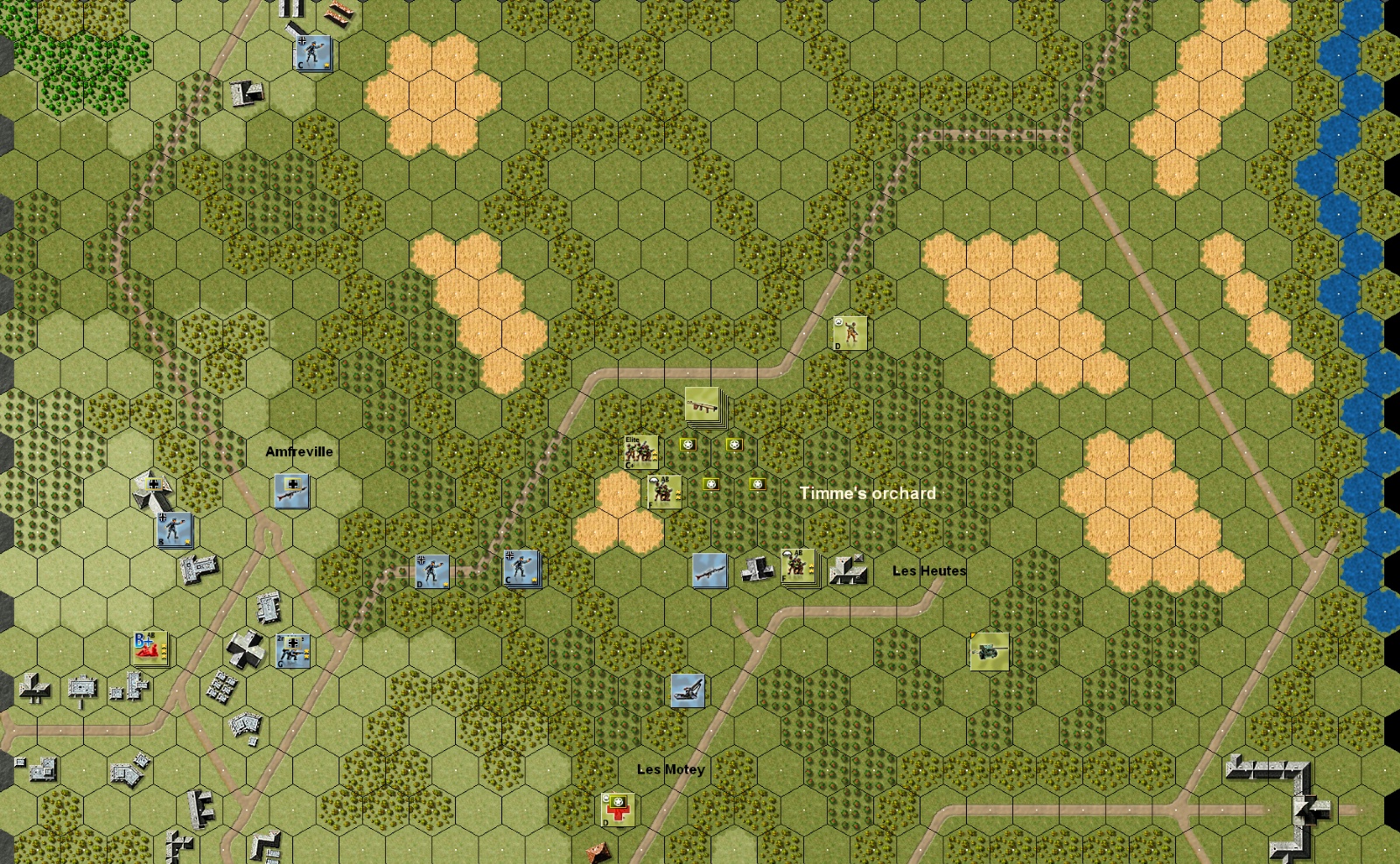 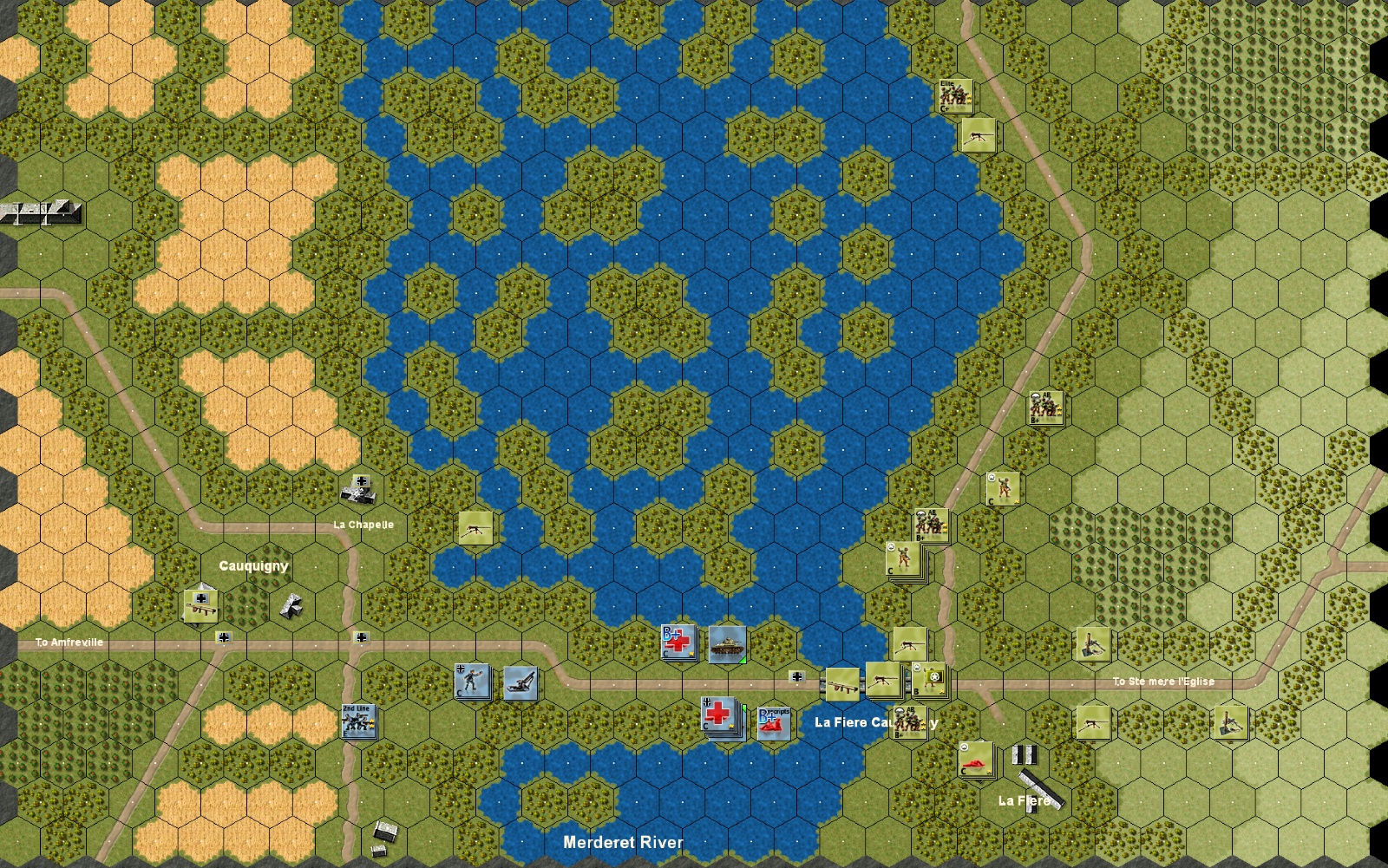 Tigers on the Hunt: Normandy contains 2 Campaigns and 6 different battles, for a total of 8 challenging scenarios to expand the game Tigers on the Hunt. The scenarios feature many historical tactical situations from the Normandy Landing, ranging from the heroic deeds of the 6th Company C of 2nd Ranger Battalion at Pointe de la Percée, the British fighting at Le Hamel, Pegasus Bridge, and more!

At 0645 hours on June 6th Company C of 2nd Ranger Battalion landed on Omaha Beach. It's objective was to secure the flank of the western beachhead at Pointe de Percée. Losing half their men in the landing they went to Plan Two, instead of dealing with the Guns to the right at Pointe de la Porcée. This meant they had to climb the Cliffs right in front of them. Doing so they found a German Wiederstandsnest (Wn73), a strongpoint consisting of a maze of dugouts and trenches and started to attack them. Soon Company B of 116th RCT landed on the beach and joined the attack. The Germans in the strongpoint defended themselves stubbornly and reinforcements were brought in. The fight for Wn 73 lasted until well into the afternoon before the Americans conquered the nest.
- Left Alone on the Shore. Date: 6 June 1944
At 0630 hours on June 6th Company B of 743rd Tank Battalion was taken ashore by their LCTs on Omaha Beach. Two of their LCTs were hit and sunk during the landing. Only 8 of Company B's 16 Tanks made it to land. Once ashore the Sherman’s had a hard time being the first large targets on land. Guns fired heavily at them and they tried with great difficulty taking out those Guns. No supporting infantry were around that could help them in their troublesome situation.
- Le Hamel. Date: 6 June 1944
The British 1st Dorsetshires and 1st Hampshires of the 231st Infantry Brigade landed on Jig sector of Gold Beach at 0725. They immediately came under fire from the casemated 75 mm gun at Le Hamel. Their tanks came ashore slightly late and only five made it through the minefields. One Tank supported the infantries attack on the casemate while C company of 1st Hampshires moved around le Hamel and attacked from the other side. le Hamel wasn't cleared until 1630.
- Assault On The Merville Battery. Date: 6 June 1944
On D-Day the British 6th Airborne Division had been given the task of securing the left flank of the Allied seaborn landings. One of the objectives was the Merville Gun Battery who threatened Sword Beach. Colonel Terence Otway's 9th Parachute Battalion was given the task to neutralize the Battery. It consisted of four tunnel-connected casemates believed to hold 155 mm Howitzers along with personnel bunkers, machine gun nests and trenches. The Paratroopers was scattered, many too far away to make it in time for the assault so Otway could only muster 150 out of the 600 men jumping. The British Para's attacked and was inflicted heavy casualties by the defending Germans. Otway secured the compound and disabled the Guns. When reaching the Guns they discovered that they were old World War I guns, 100mm Howitzers manufactured in Czechoslovakia.
- Pegasus Coup de Main. Date: 6 June 1944
History: As a part of Operation Deadstick British Units from the 2nd Oxfordshire and Buckinghamshire Light Infantry 6th Airlanding Brigade 6th Airborn Division were to capture the bridge over the Caen Canal near the village of Benouville in a Coup de Main. Major R.J. Howard commanded the three Gliders that attacked the bridge near Benouville. The Gliders made the touch down at approximately 0020 hrs. The defending German units were taken by surprise but soon responded. The Battle for the Pegasus bridge, as it later would be renamed had begun.

History: As a part of Operation Deadstick British Units from the 2nd Oxfordshire and Buckinghamshire Light Infantry 6th Airlanding Brigade 6th Airborn Division were to capture the bridge over the Caen Canal near the village of Benouville in a Coup de Main. Major R.J. Howard commanded the three Gliders that attacked the bridge near Benouville. The Gliders made the touch down at approximately 0020 hrs. The defending German units were taken by surprise but soon responded. After realising that Britsh Paratroop units had captured the bridge the Germans made nightly counterattacks and among the approaching sounds through the darkness of the night vehicles could be heard.
©2016 Slitherine Ltd. All Rights Reserved. Tigers on the Hunt, Slitherine Ltd. and their Logos are all trademarks of Slitherine Ltd. All other marks and trademarks are the property of their respective owners.

Base Games (one is required)
Tigers on the Hunt