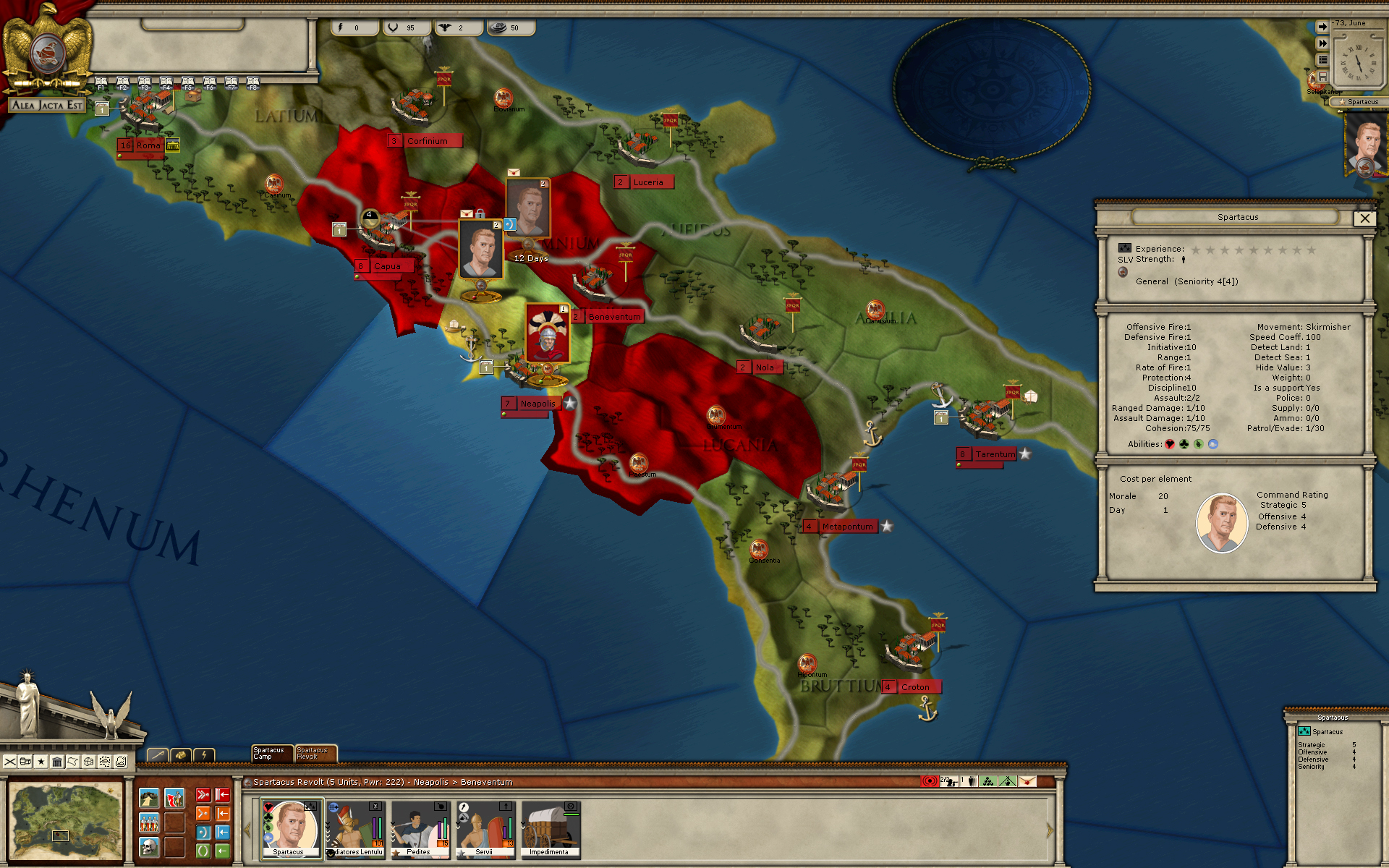 This epic scenario covers the 3 years of the famous gladiators and slaves revolt led by Spartacusthat brought the Roman republic to a major crisis between 73 and 70 BC. Players can either select Rome or the famous Spartacus in a fast-paced and active struggle. 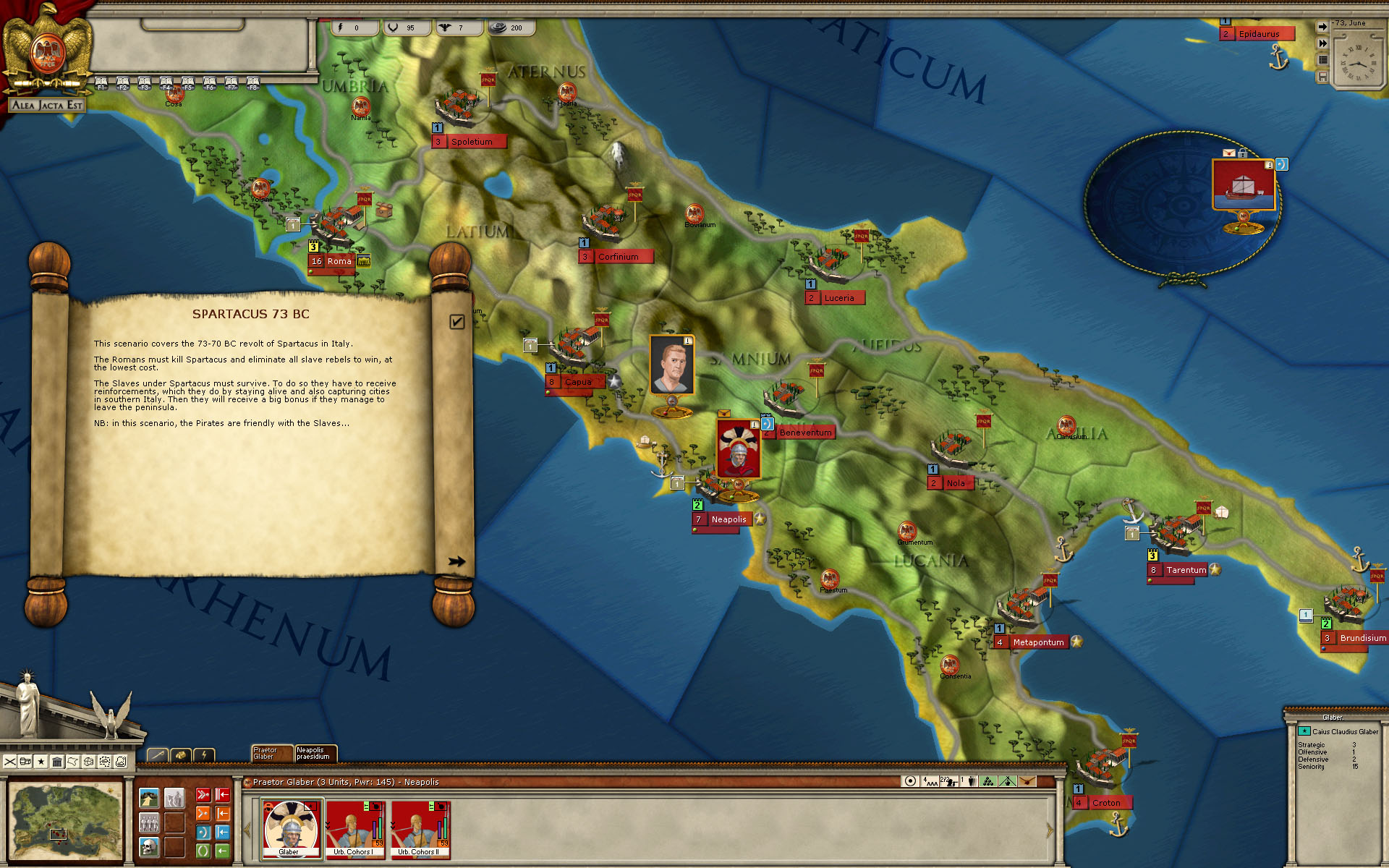 Thiw Spartacus Revolt 73 BC is an expansion for Alea Jacta Est, the first historical strategy game on the PC to cover the main Roman civil wars. The DLC covers the 3 years of the famous gladiators and slaves revolt led by Spartacus that brought the Roman republic to a major crisis between 73 and 70 BC. Players can either select Rome or the famous Spartacus in a fast-paced and active struggle, where each side will have to achieve hard-to-reach objectives: Rome must destroy all the rebels and kill Spartacus, while the latter must attempt to have as many of his followers as possible to leave Italy.

Roman territorial expansion after the Punic Wars has led to major political, economical and social changes. Among one of the results of the victorious conquests, there is a huge influx of slaves into Italy which creates long term dramatic consequences. This large mass of costless manpower quickly leads poor Roman free workersto misery, inactivity and anger. This proletariat will be the base on which ambitious and demagogic politicians will play, offering 'bread and games', to make their clients against the Senate.

As for the thousands of slaves, they replace the former free workers as laborers for all the hardest tasks, in the mines, careers and Latifundias, the large estates of the rich Roman citizens, usually in Southern Italy and Sicily. Whereas a great majority could envision no hope and were badly treated.

In 133 and 101 BC, two revolts had degenerated in large servile wars in Sicily, and took years to be crushed. But in 73BC, no one could envision that the small light ignited by the escape of a few Capuan gladiators would turn all of Italy aflame.....

From the ludus (gladiator school) of so-called Lentulus Batiatus in Capua, the Thracian Spartacus leads his fellow men into escape, carrying brands with which they put the local militia to flight.

Having taken refuge on the slope of the Vesuvius, they were beseiged there by the troops of Praetor Glaber. Using wild vine plants to cross cliffs, the gladiators take their opponent by surprise and send them routing. Upon hearing the news, thousands of slaves, shepherds and poor people join Spatacus' ranks.

This was the start of an epic that would see Rome tremble for three years, full mobilization of all forces of the republic was required in the end to crush that mortal peril!

After having set Italy ablaze, the slaves armies were finally beaten by the wealthy and ambitious Crassus, at the cost of thousands of deathes and executions. Spartacus will fall among his breatherns, in the midst of battle, and his body will never be found. Pompeius coming back from Hispania, will crush the last band in Northern Italy and will claim the whole glory of the wars which had nevertheless been won by Crassus.

A new campaign featuring the Slaves revolt of Spartacus (73 BC)