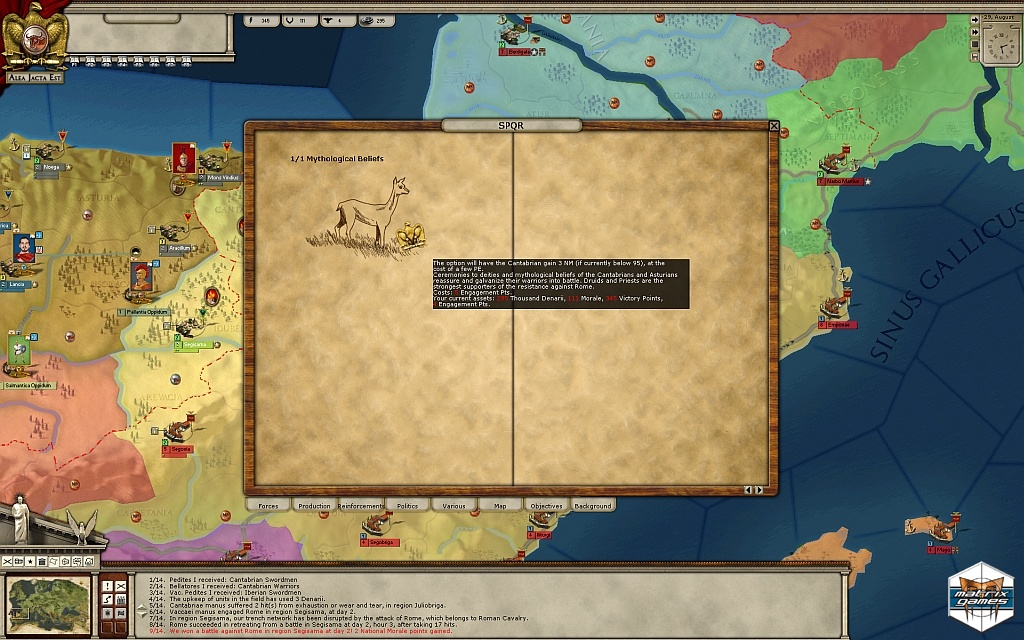 Ten years of tough fighting and guerrilla in the difficult mountains of Northern Spain, when the Romans under Emperor Augustus try to subdue the last remaining independent Hispanian tribes in Asturia and Cantabria, from 29 BC to 19 BC. 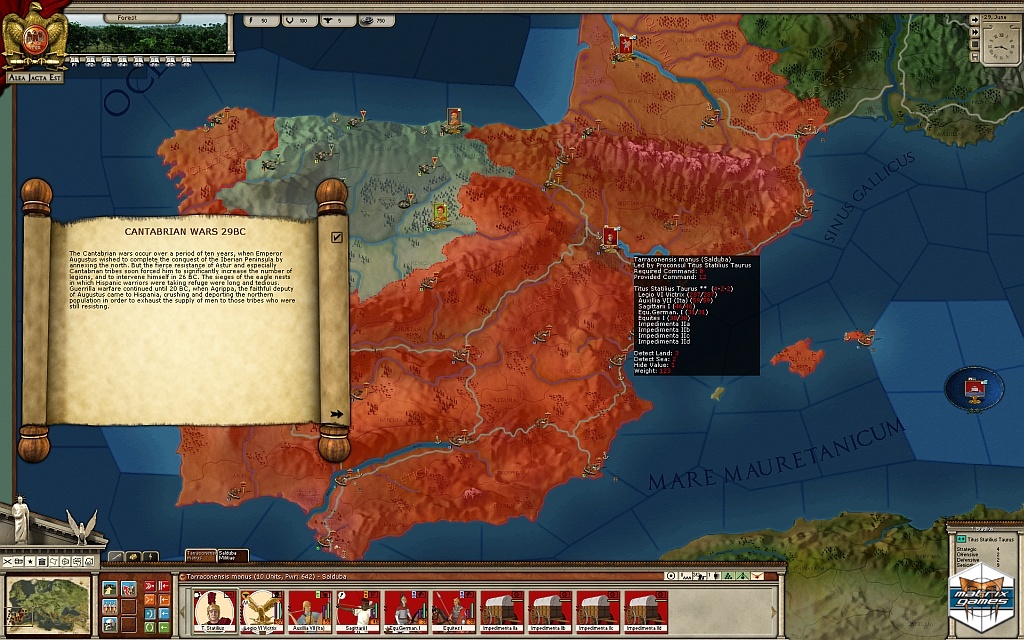 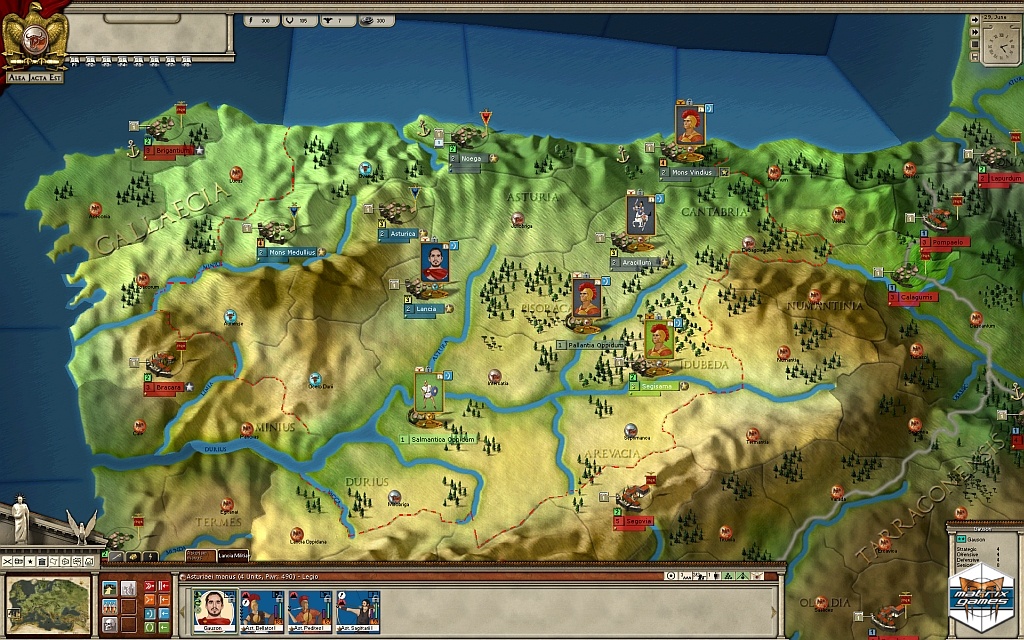 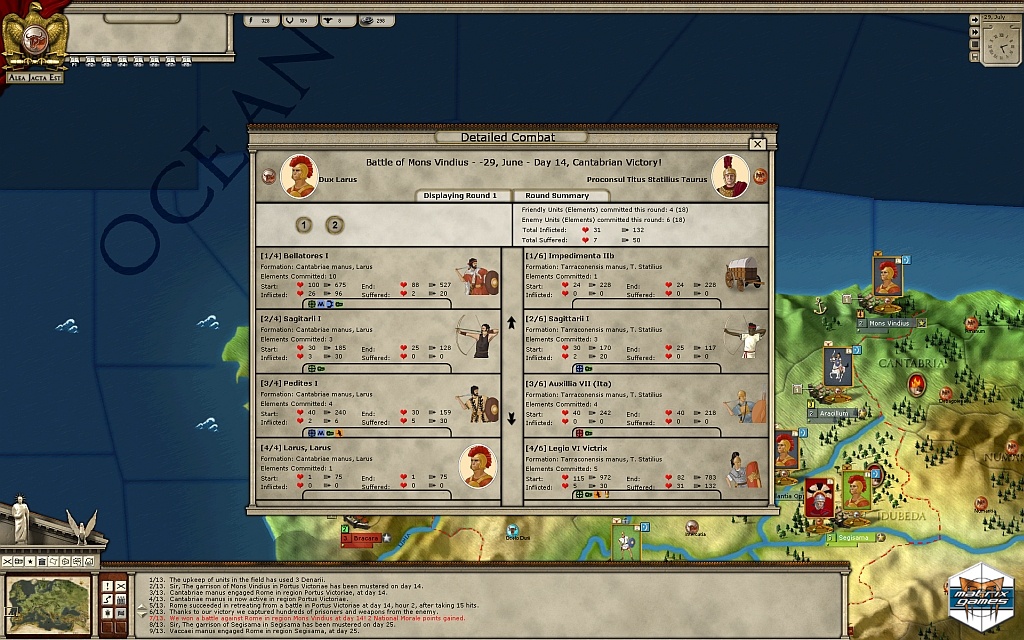 The Cantabrian Wars - 29 BC is an expansion for Alea Jacta Est, the first historical strategy game on the PC to cover the main Roman civil wars. Thid DLC spans over ten years of tough fighting and guerrilla in the difficult mountains of Northern Spain, when the Romans under Emperor Augustus try to subdue the last remaining independent Hispanian tribes in Asturia and Cantabria, from 29 BC to 19 BC. Players can either select Rome or the Spaniard tribes: Rome must conquer the whole region and subdue the tribal warriors, while the latter must survive the might of the Legions and preserve their freedom.

Following his victoryat Actium in 30 BC, Octavian became the absolute master if Rome. After having celebrated three triumphs, he reorganized the empire by using the wealth of defeated Egypt.  He returned to the Senate the management of all but three provinces (that he reserves for himself: Gaul, Hispania and Syria).

In addition to strengthening the borders in the provinces, he decided to put an end to the home fronts by eliminating the last pockets of resistance to Roman rule.  Thus in Hispania, he orders Titus Taurus Statilius to reduce the Vaccaei tribe 29BC. That tribe calling help to the Asturian and Cantabrian mountain neighbors, a pretext is found to launch a military campaign against those nations still clinging to their independence and lands in northern Hispania.

What the imperial administration had not expected, however, was the duration of the war, which will continue until 19 BC, and require sending many legions, and even the personal intervention of Octavian, who became the Emperor Augustus in 26 BC.

By 19 BC, the Asturian and Canatabrian peoples will eventually accept Pax Romana, at the cost of many massacres and executions performed under the orders of Agrippa, final winner of the last independent tribes of the peninsula.

Ancient Command System (based on the Wars in America system), allowing for a good representation of historical army command in the Roman era

Quick and simple system of Construction of Units, allowing players to choose and purchase their forces as they wish (or can)

Decisions features, playable on the map, like wild cards assets

Different updates and other rules, in particular combat system adapted to the Ancient warfare

Over a thousand of leaders and units with specific pictures