War In The Pacific 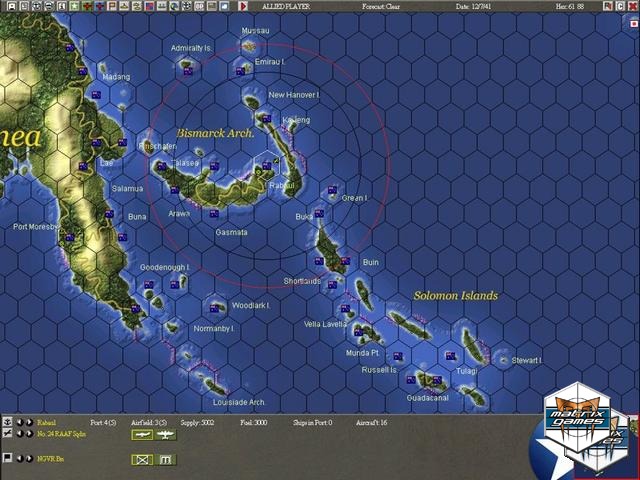 War in the Pacific: The Struggle Against Japan 1941-1945 is a classic strategy game, based on the award winning Uncommon Valor game engine. 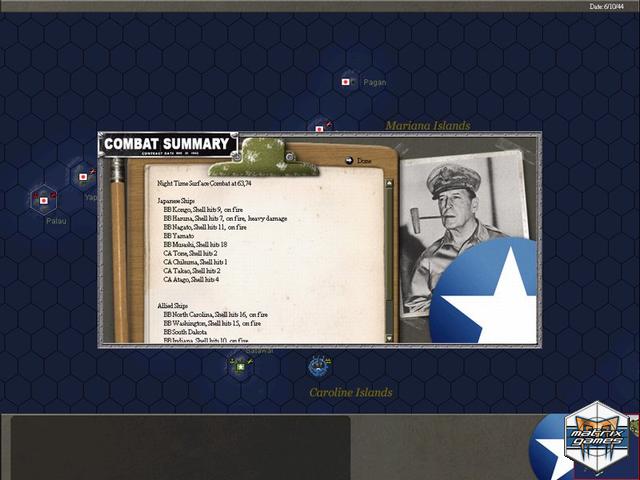 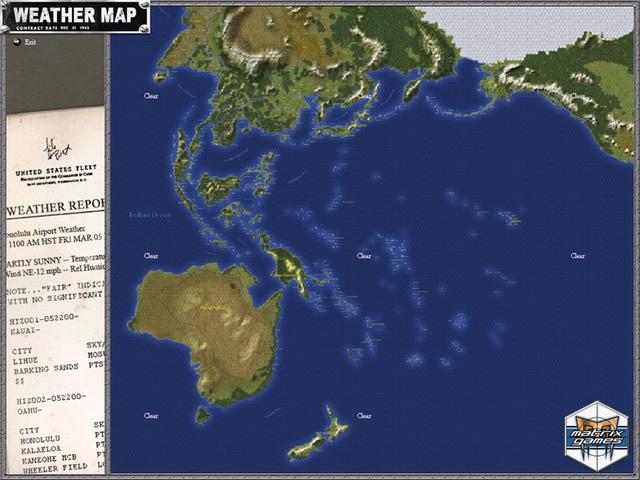 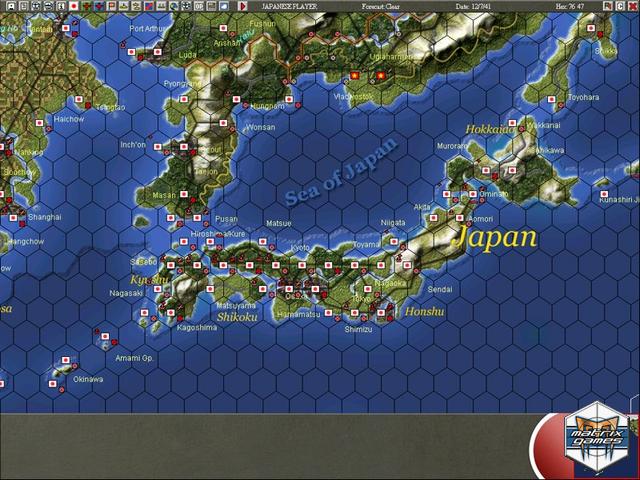 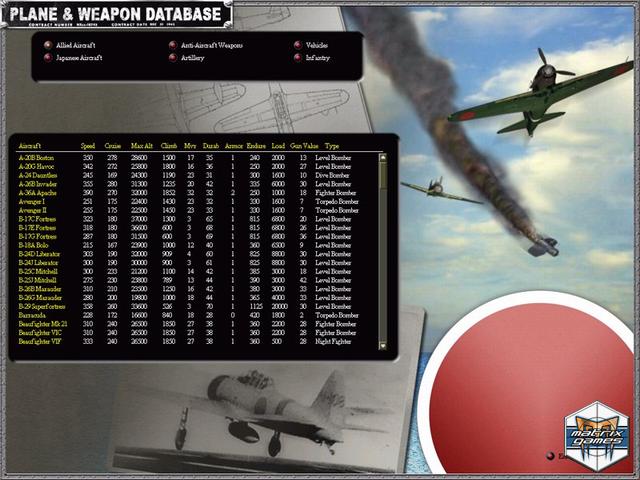 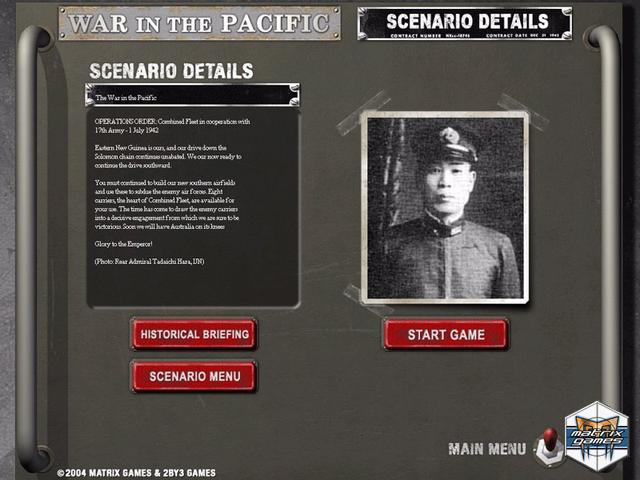 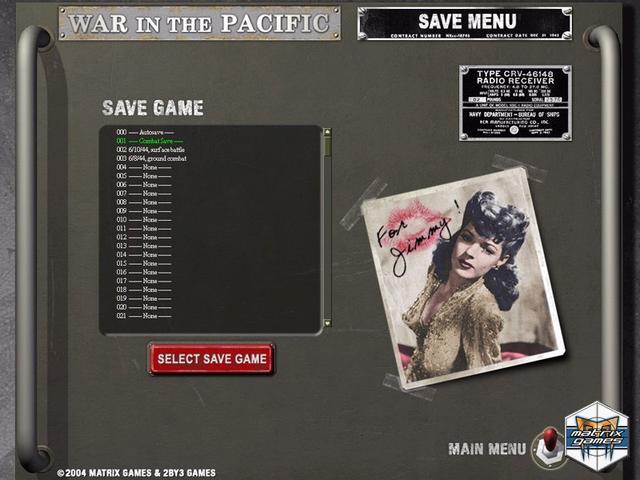 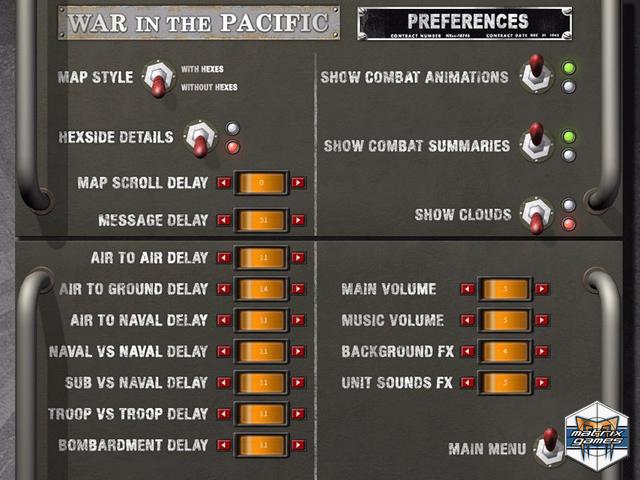 War in the Pacific is Updated!

May. 23, 2007 - Another update file to bring some tweaks and improvements to this wargaming sensation Matrix Games…

Flash: War In The Pacific Updated!

War in the Pacific: The Struggle Against Japan 1941-1945 is a classic strategy game, based on the award winning Uncommon Valor game engine. The scale is 60 miles per hex and losses are individual vehicles, aircraft, guns and squads. Since half the planet Earth is covered by the titanic Pacific struggle, the game is massive in scope, covering thousands of ships tens of thousands of aircraft.

War In The Pacific covers the entire Pacific Theater of WWII from Dec 7th 1941 until June 30th 1946.

The War At Sea - Besides critical hit locations for all weapons platforms and any radar installations, individual armor locations and a wealth of performance and characteristics data, each ship’s crew has an experience rating for day and night combat. Every ship from mighty carriers and battleships down to gun boats has a commander with his own strengths and weaknesses. The game includes thousands of ships chosen from over 300 ship classes.

The War in the Air - A wide variety of aircraft are included in the game, ranging from the awkward P-39 and the nimble Zero, to the heavy hitting B-29 and the extremely fast and powerful Corsair. Pilots and crews are tracked separately from aircraft and have individual skill and fatigue ratings. When pilots are in short supply, they can be placed into the pilot pool and reassigned to other groups

The War on the Ground - Troops are needed to maintain and garrison bases and to deprive the enemy of his bases. So, troops are handled with care. There are a goodly number of different types of land-based units. The unit counters are mostly on division and brigade level, but there are many independent regiments and battalions. These are all represented by different unit counters and have different capabilities and include engineers, combat squads, Marine squads, support squads, air support sections, Sherman tanks, Stuart tanks, motorized forces, a number of mortars and field artillery and many others. There are 15 campaigns included with the game, which can be played against the computer opponent, hot seat, by secure email. War in the Pacific now gives you the chance to fight the entire war your way on every level.

Some troops are restricted in deployment. Australian troops must be release from home defense, for instance, before they can be shipped off to fight in New Guinea. And, Admirals can’t be everywhere, at once. Each day, each player accumulates political points which can be used to reassign assets to the various headquarters or to change leaders.

Groups cannot fly without planes, ships need to be built and tanks have to come from somewhere. The Japanese player will never have enough industry to build all he needs. He can choose to increase the size of factories or change what they are building at the cost of retooling. He can also speed up or retard the building of specific ships to the possible detriment of the shipbuilding schedule. He will need oil and resources to make industry run and will want to capture locations with such materials as quickly as possible. Much of this gathering can be automated, but the player will be able to fine tune the procedure or manually order the loading and destination of his ships.

Coastal Defense Units will now protect friendly mine fields. Air Dropped Mines - Starting in 1943 the Allied player may mine ports by using air dropped mines. Air Dropped Supplies Supplies may be air dropped onto any friendly hex. Air Transport Pick Up Option You can now fly from one base, pick up troops at another base and return them to the first base. Target Selection It is possible to select a target that is out of range so that you can set up a carrier strike the turn before. Atomic Bombs When available an atomic attack can be made on any city with industrial center. New City Attack Option: the player can select a city to attack and the industry within that city to be targeted. New Fire Bombing Mission: city attacks on Manpower have a chance of creating high fire levels that will cause damage to any and all industry within the city and has the possibility of creating a firestorm. Kamikazes After January 1944, if the Allies get too close to Japan, the Japanese player can form Kamikaze squadrons to smash into enemy ships and drive them away from the homeland. New ASW Taskforce: use the ASW Combat task force to locate and attack enemy submarines before they are able to fire their torpedoes. New Escort Taskforce: use the Escort task force to escort your damaged vessels back to a safe port. Manchukuo Garrison Requirement: the Japanese player must keep a certain number of assault points in the Manchukuo area or the Soviet Union may be activated. Preparation Points Ground: units can prepare to attack a given location by setting its future objective and accumulating preparation point prior to making the attack. Ship Repair: now you have a choice of where to send damaged ships for repair. Each side has a number of different ports to choose from and each port is rated for its own repair capabilities. Special Ships: a submarine, PT or DD tender may help two ships per turn repair (they give a bonus equal to increasing the port size by 2). A repair ship may help four ships per turn repair. Training of LCUs Land combat units can now be trained, until they reach 75% experience. New Set Speed Order:  take full control of your task force and pick the speed setting you want. New Reaction Range Order: rein in your aggressive commanders by setting the maximum range they are allowed to react. New Unload/Dont Unload Order: You decide if the taskforce will unload upon arriving at its destination. Now you can send that taskforce into a port to refuel without it unloading its cargo. New Do not Refuel Order: tired of having merchant ships suck up all the available fuel? Now you can set them to Do Not Refuel and save that fuel for you war ships. New Auto-Disband Order: with this set to on the taskforce will automatically disband when it reaches its destination saving. This is a great option when sending ships into port for repairs.

The armed forces of every major nation are represented. The Japanese control their production

Oil and Resources added to the game for production. Complete player control of aircraft upgrades