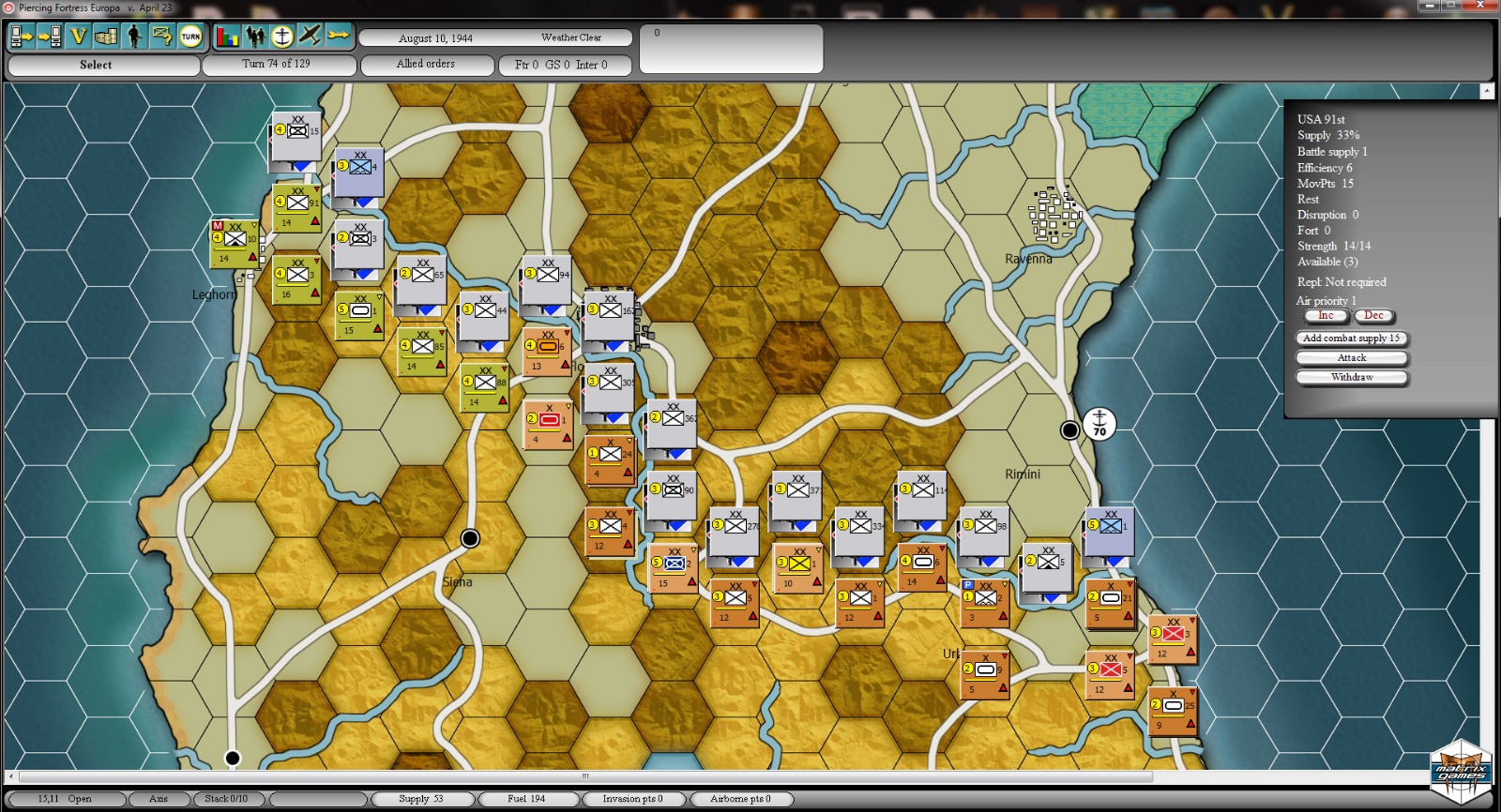 Piercing Fortress Europa covers the campaigns of the Western Allies from July, 1943 through the end of April, 1945 in Sicily and Italy. The player has full freedom, limited only by a historical order of battle and logistics model, to plan his operations and explore all of the many what ifs that the Italian theater has to offer. 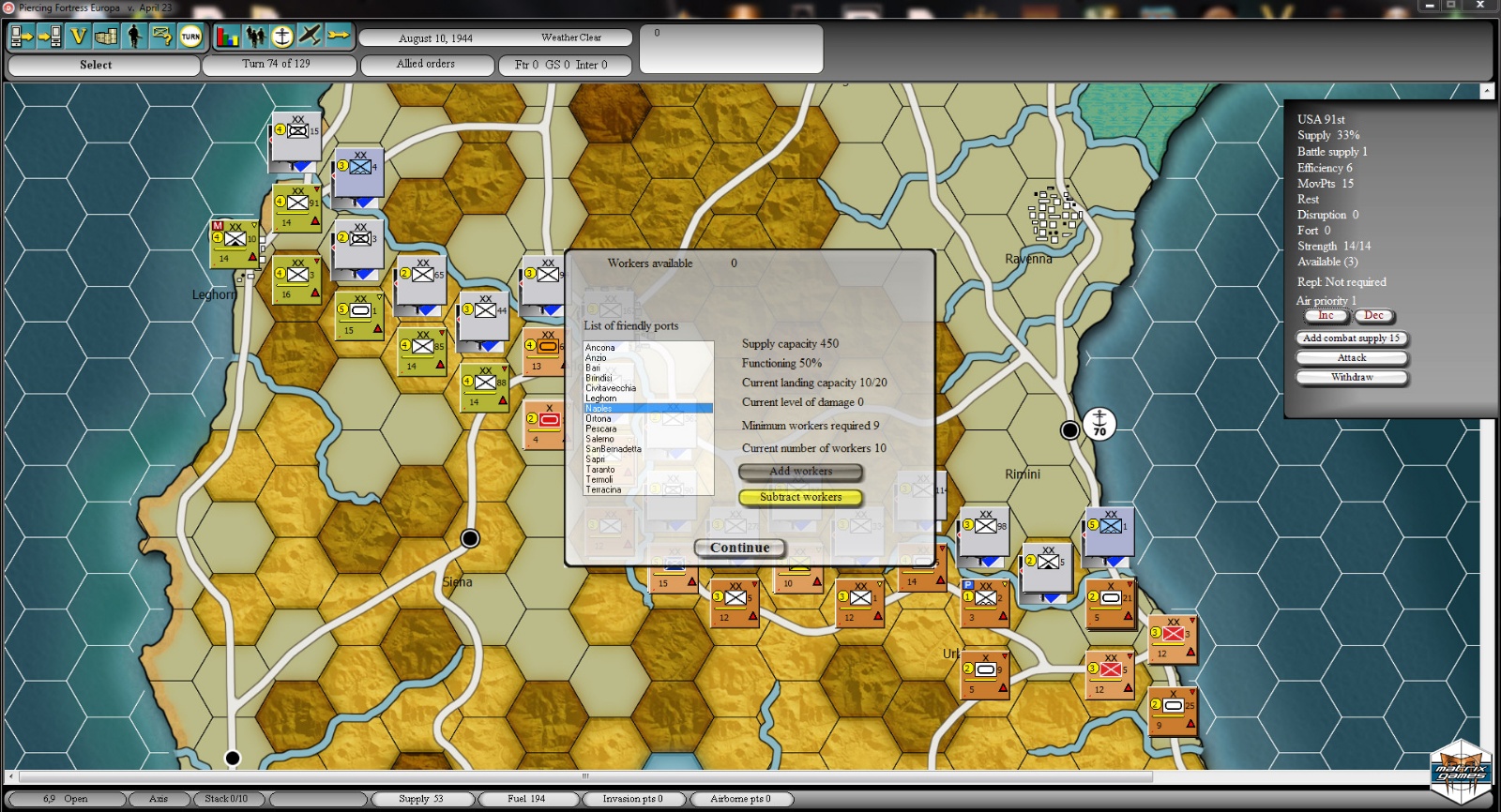 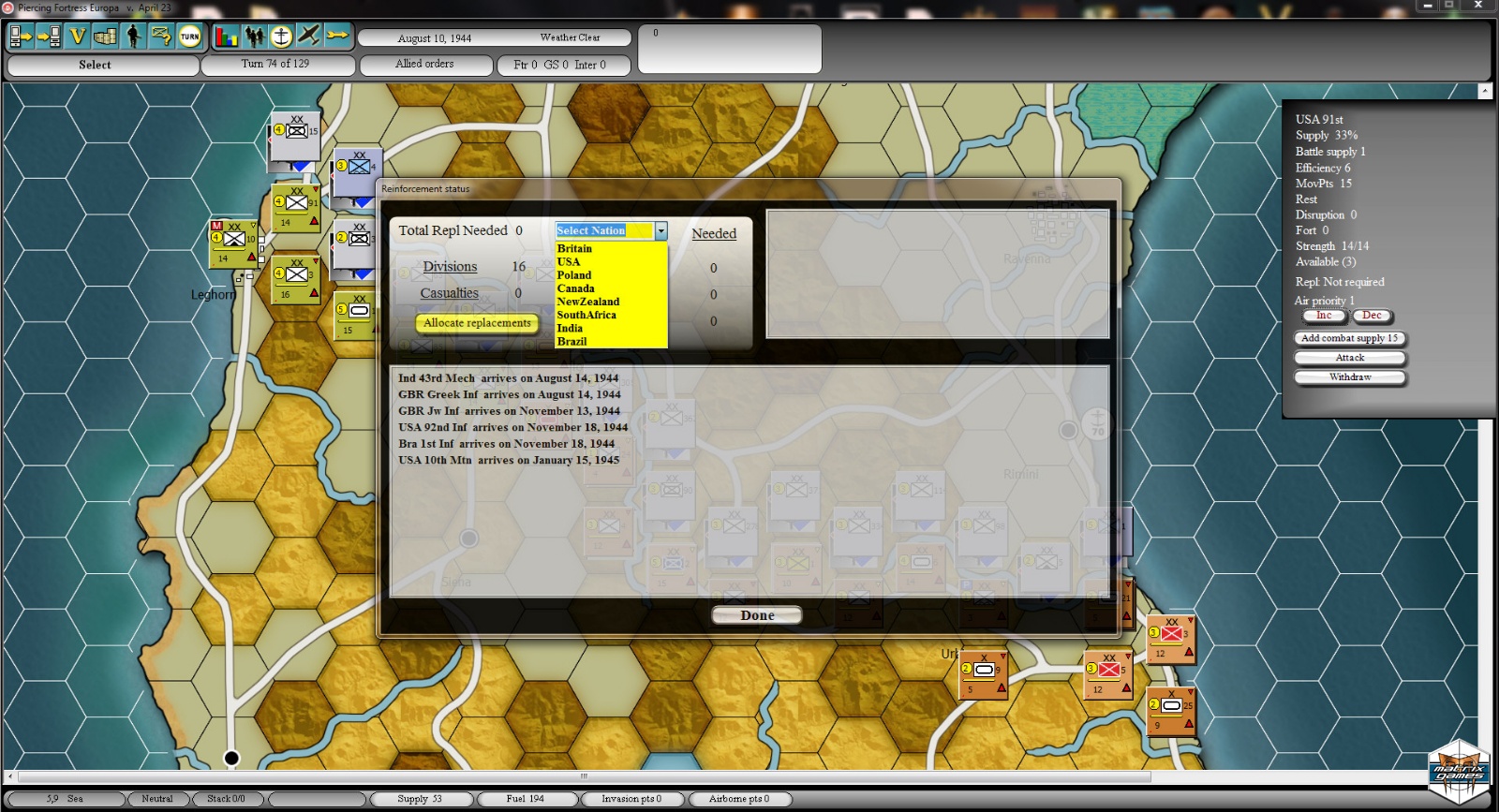 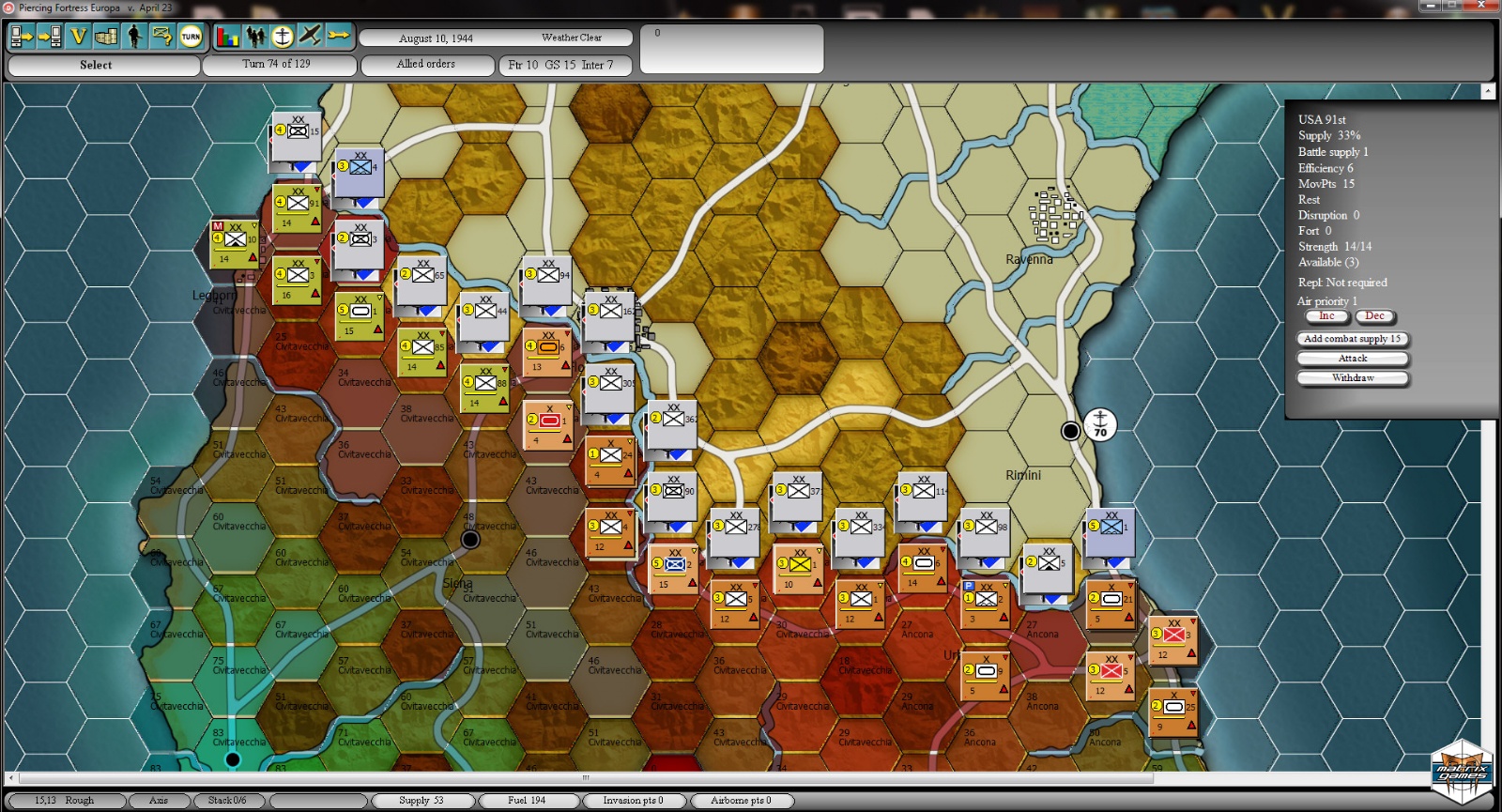 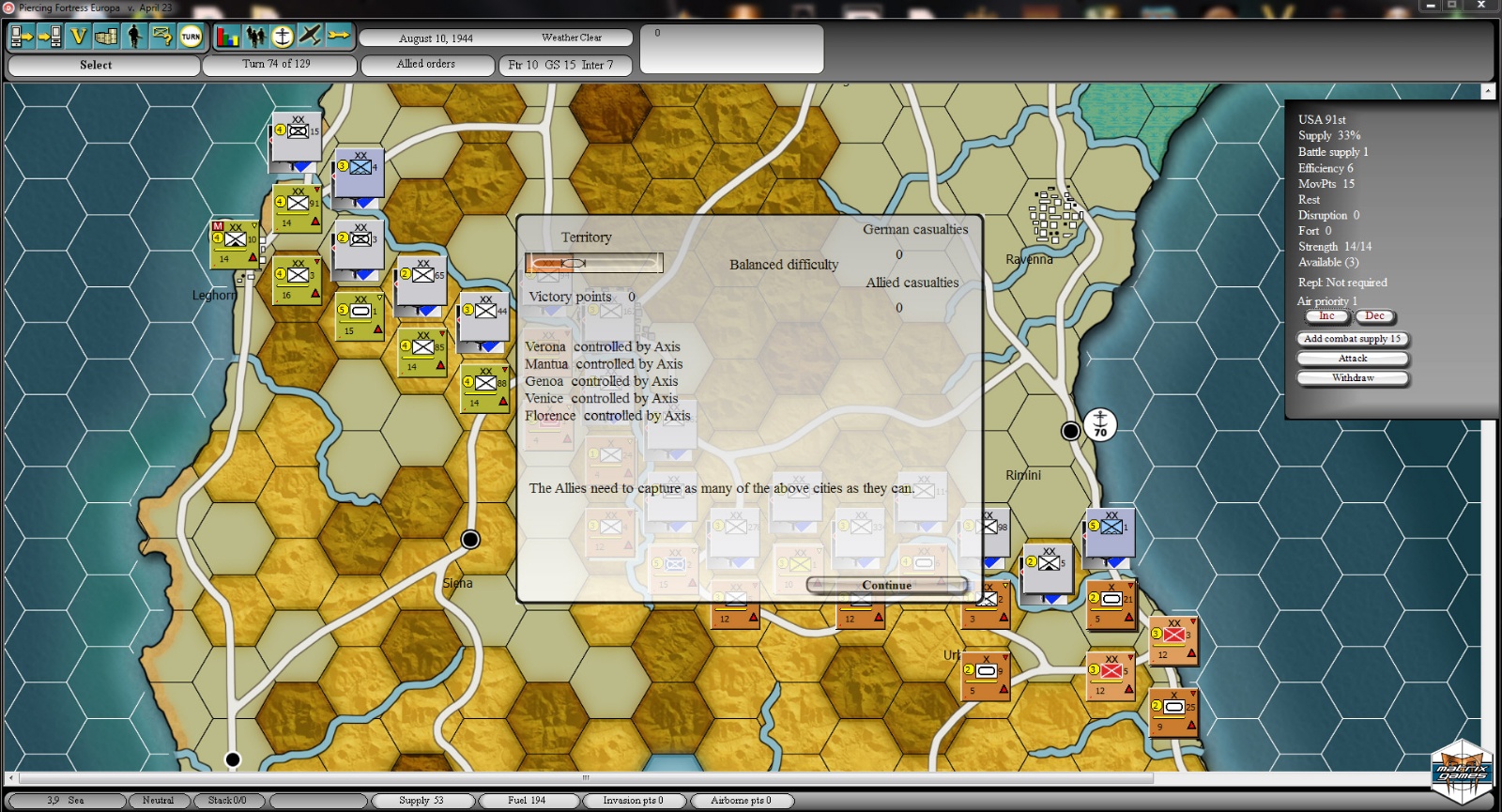 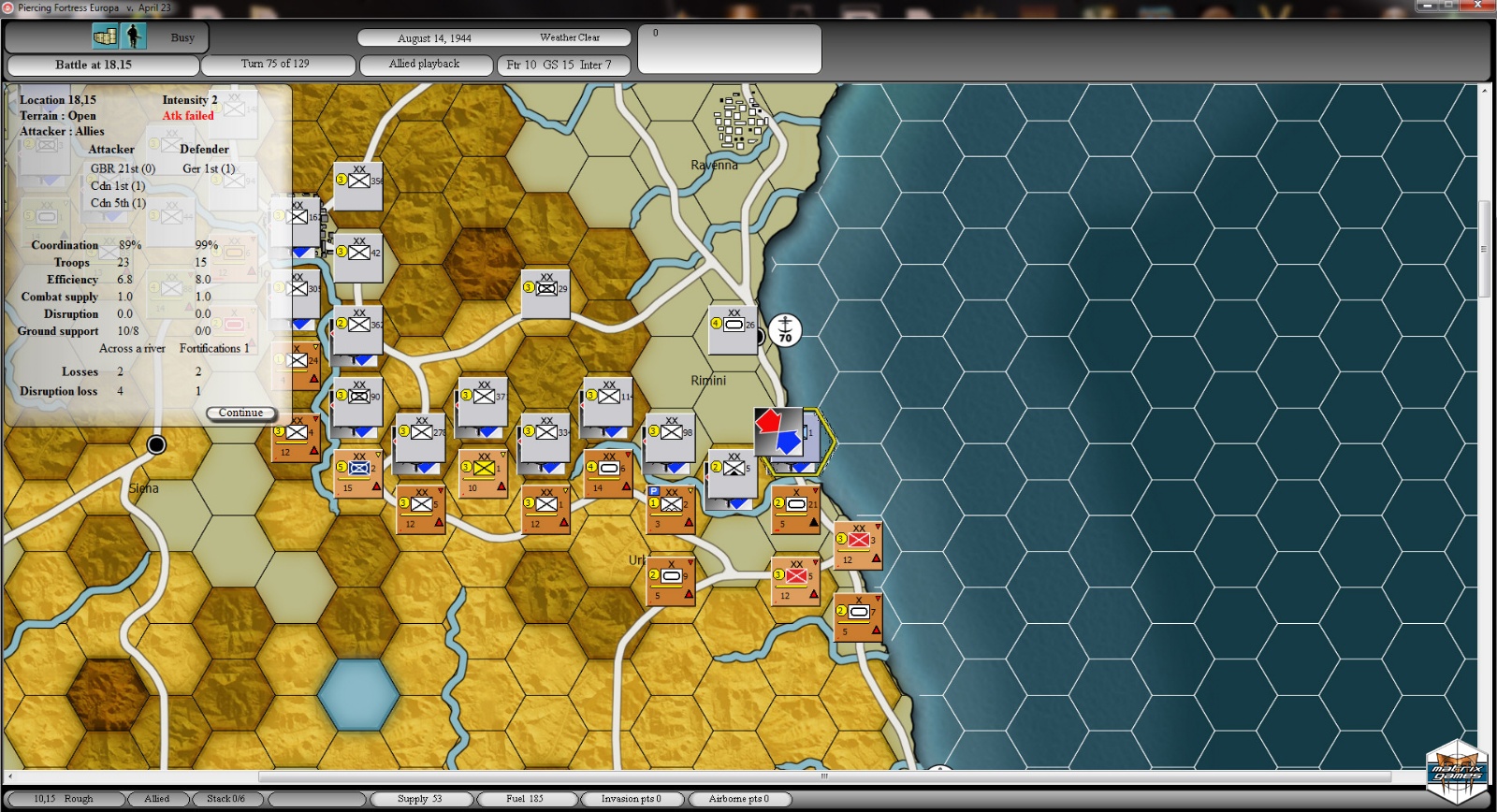 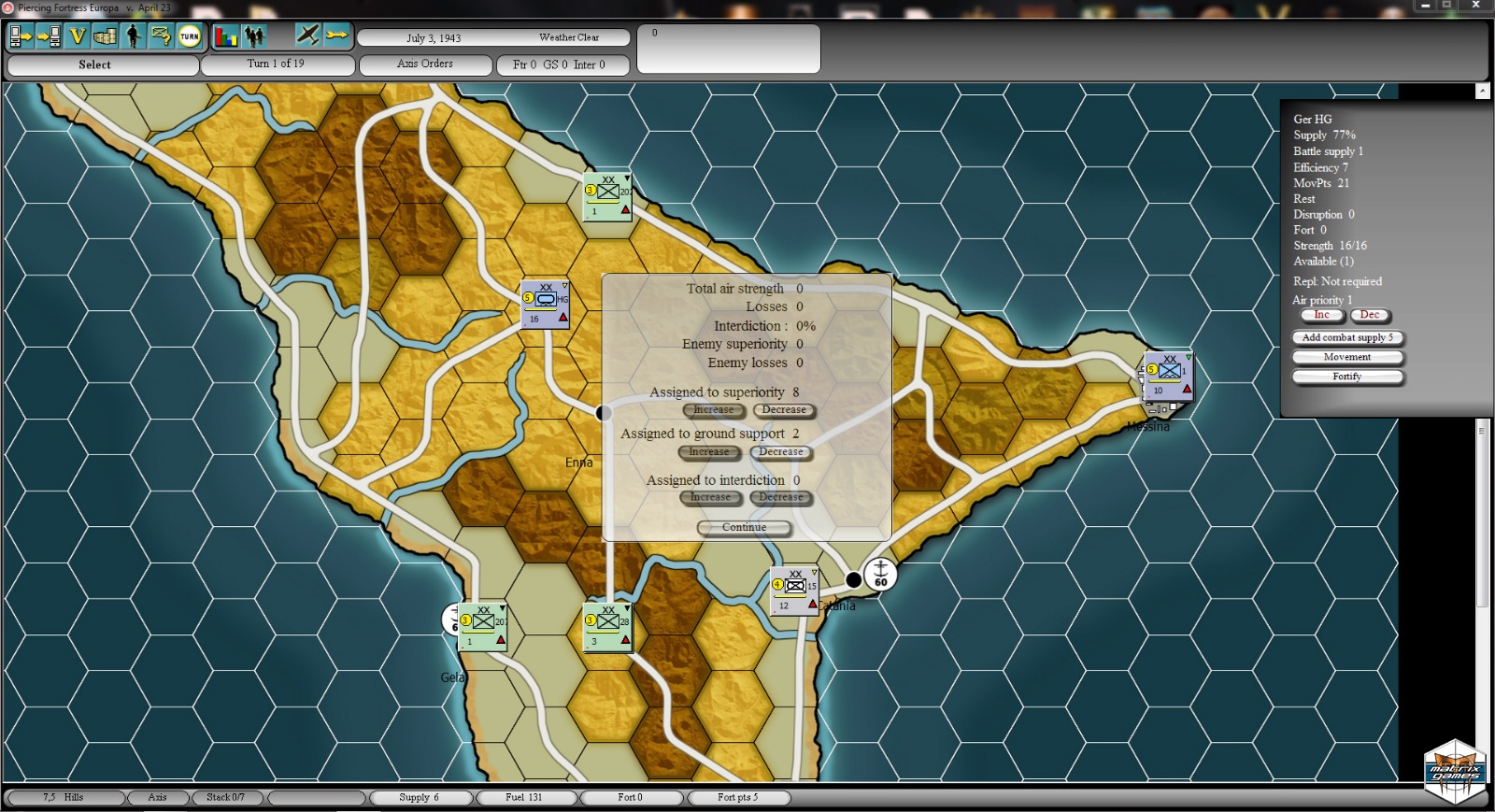 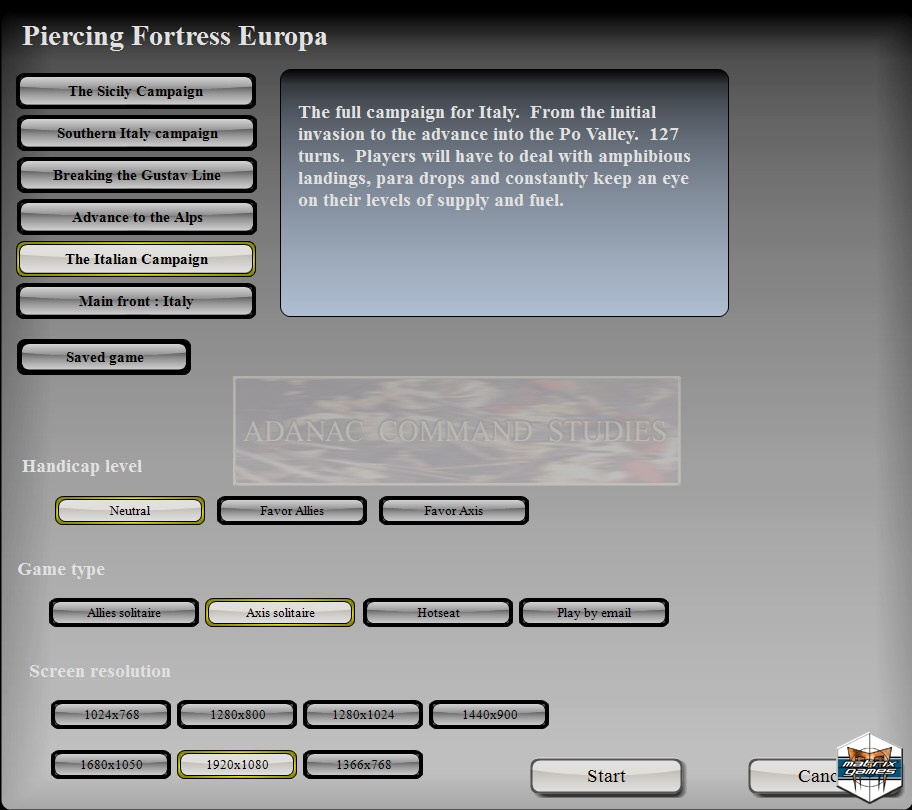 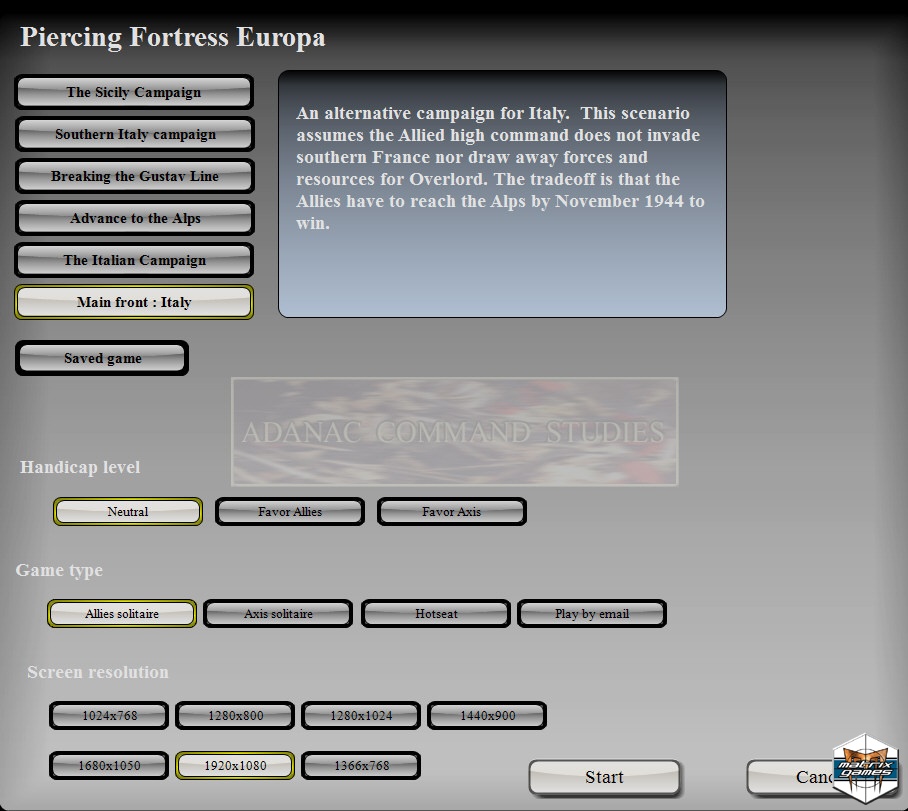 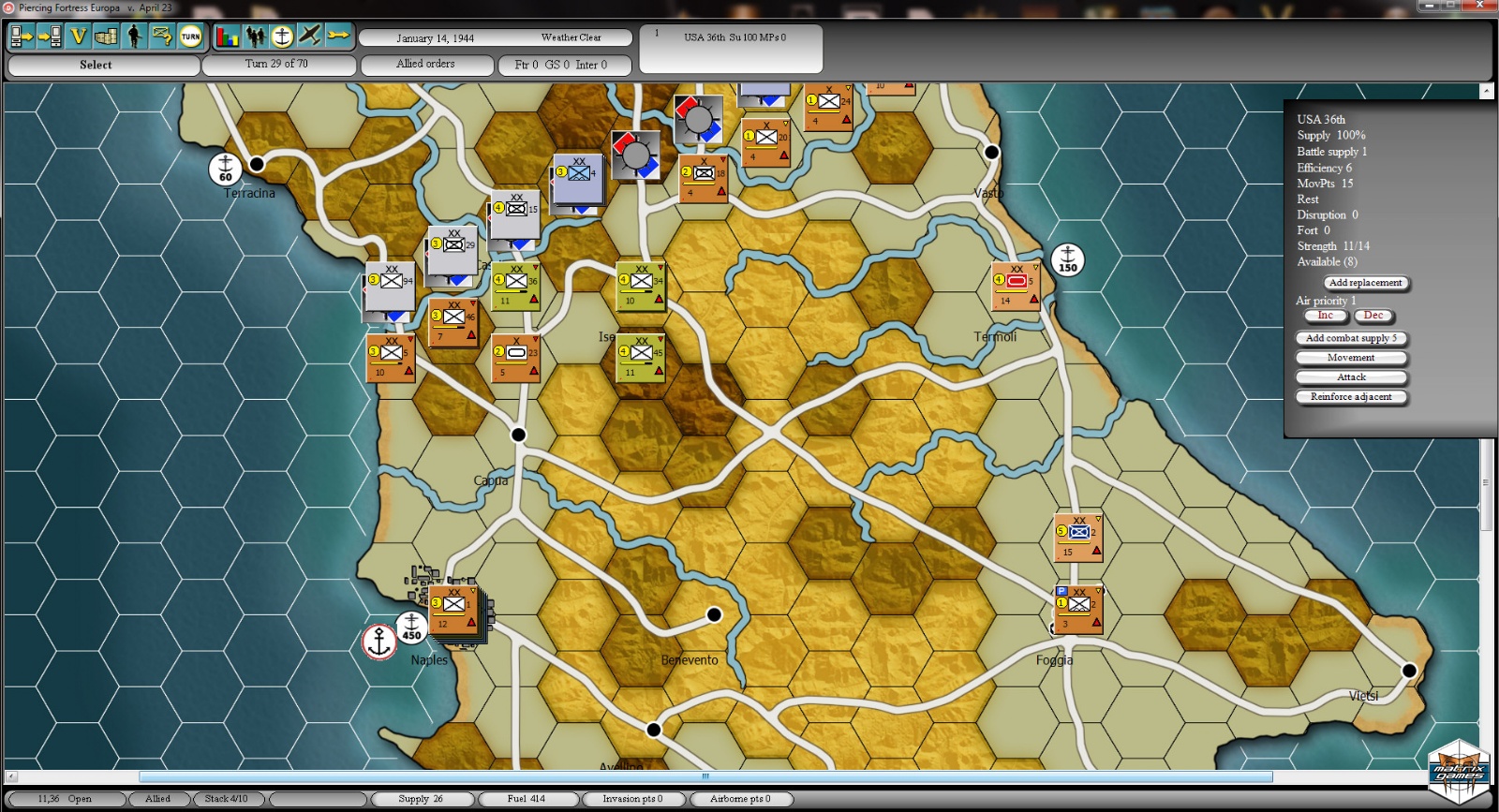 Deal of the Week! Piercing Fortress Europa is on Sale!

Mar. 09, 2015 - Good News soldiers! Today we are happy to announce that our beloved Deal of the Week is back…

Oct. 20, 2014 - As part of our ongoing commitment to the Piercing Fortress Europa community, a new update…

Apr. 09, 2014 - Piercing Fortress Europa, the latest release of Frank Hunter, has just been updated to version…

Piercing Fortress Europa is an operational wargame from veteran game designer Frank Hunter, which covers the campaigns of the Western Allies from July, 1943 through the end of April, 1945 in Sicily and Italy.  Each area has its own map and time scale to best represent the campaigns for Sicily and Italy and the player is offered complete freedom, limited only by a historical order of battle and logistics model, to plan his operations and explore all of the many “what ifs” that the Italian theater has to offer. Tour Italy… with an Army!

The first Allied landings in Europe in World War II took place in Sicily and then on the Italian mainland.  Here many of the soldiers, divisions and generals that later landed in France as well as many others that fought in Italy through to V-E Day first showed that what Hitler called “Fortress Europa” could be breached and the Axis forces in continental Europe defeated.  Through these battles, Italy was knocked out of the war and the Wehrmacht forced to eventually fight a three front war that stretched it to the breaking point.

The units of both sides are fully modelled, including armored, infantry, airborne, commando and garrison units rated for size, quality, strength and disruption.  Although strength and disruption are important, the focus of the game is on supply and fuel.  As the commander you need to plan ahead in this "WEGO" system, allocating your limited combat supply to your units in advance of combat operations and making sure your supply lines do not stretch too far.

Piercing Fortress Europa is not a difficult game to learn, but it is modelled with historical accuracy from start to finish to give a fast playing historical wargame that allows you to think and plan based on the same considerations as a historical theater commander.

- The Sicily Campaign. Only 20 turns long and containing a small number of divisions.

- The Italian campaign which begins on September 1st, 1943 and runs for 20 months till the end of April, 1945. The Allied forces here are tasked with conquering all of Italy including the Po Valley. The faster this is done the greater the level of victory.

- The Southern Italy campaign. 26 turns long, it focuses on the initial invasion of Italy, the capture of ports such as Taranto and Naples that can support further operations and the capture of the airbase at Foggia. For a decisive victory the Allies may also attempt the capture of Cassino and the town of Ortona.

- Breaking the Gustav Line. Covers the crucual period when the Allied advance on Rome was being held up at the Gustav Line centred on Cassino. Historically the Allies attempted to outflank the German position by landing in the rear at Anzio. Here the Allied player is free to try his own strategy to break the line. This scenario is 32 turns. To win a full victory the Allies must capture Rome, Pescara, Cassino, Ancona and Civitavecchia.

- Advance to the Alps. This scenario covers the battle along the Gothic line and the breakthrough by the Allies into the Po Valley and to the foothills of the Alps. Unlike earlier in the war the Allies are short of the resources they need for a broad assault. The German army starts in a good position and because of the terrain are pretty clear about where the Allied thrusts will take place. The scenario is 66 turns in length and to win a full victory the Allies must capture Florence, Mantua, Genoa, Venice and Verona.

- Main front: Italy. An alternative campaign which assumes the invasion of southern France doesnt happen and the forces and resources are instead kept in and/or diverted to the Italian campaign. The campaign up until the spring of 1944 is fairly historical. After that there are a number of differences. The withdrawals of units from the Allied army no longer take place and the reduction in resources is cancelled. As a tradeoff for the advantages gained by the Allies, they are expected to reach the Po Valley by December of 1944 or the campaign is considered to be a failure.

Entire Italian Theater (including Sicily) from 1943 through 1945

Play against the AI or head to head with another human player via PBEM Division and Brigade size units fully modelled for strength, size, quality, disruption, combat supply

Replacements by nationality, can be allocated by unit and shattered units rebuilt Air Superiority, Ground Support and Interdiction