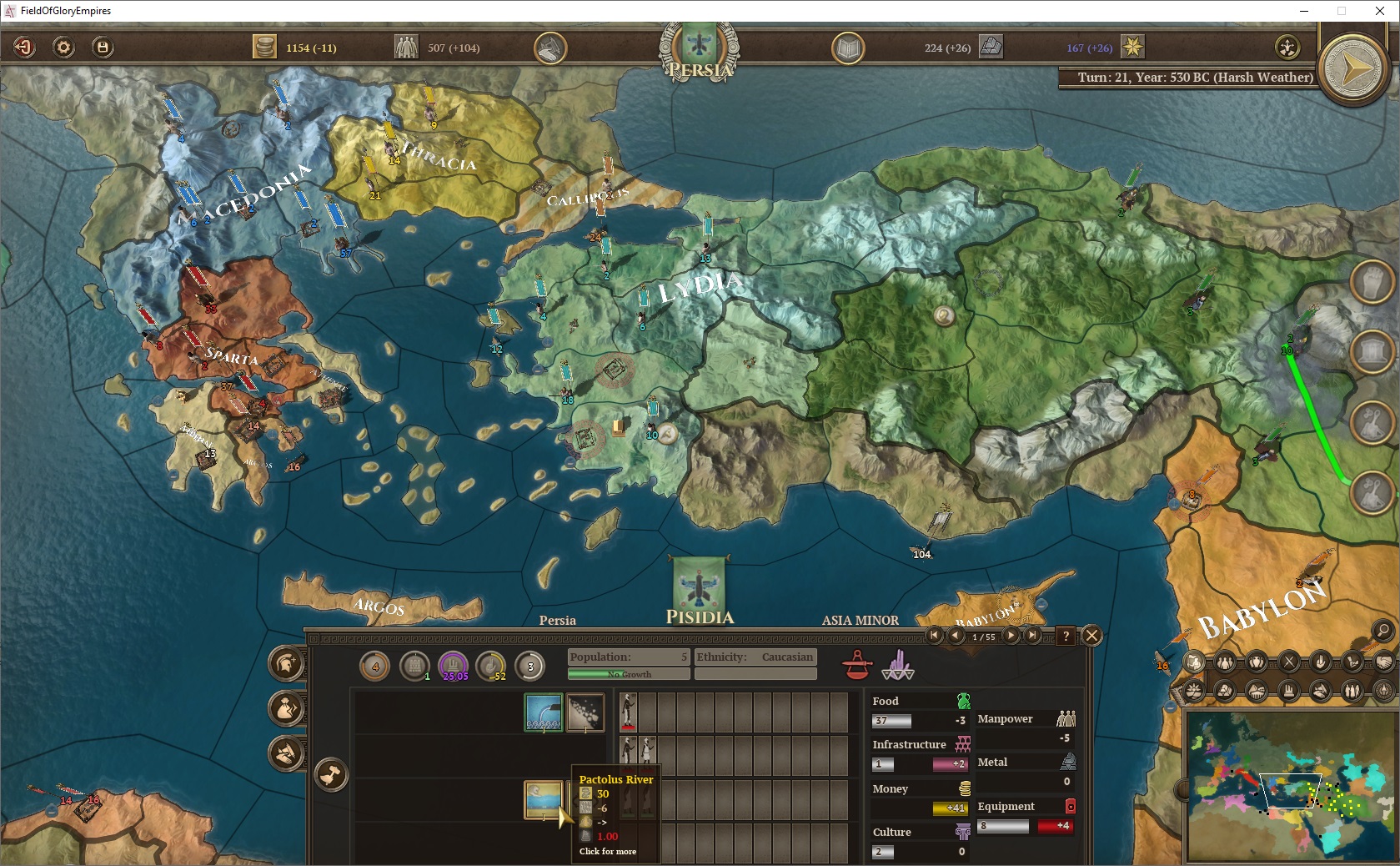 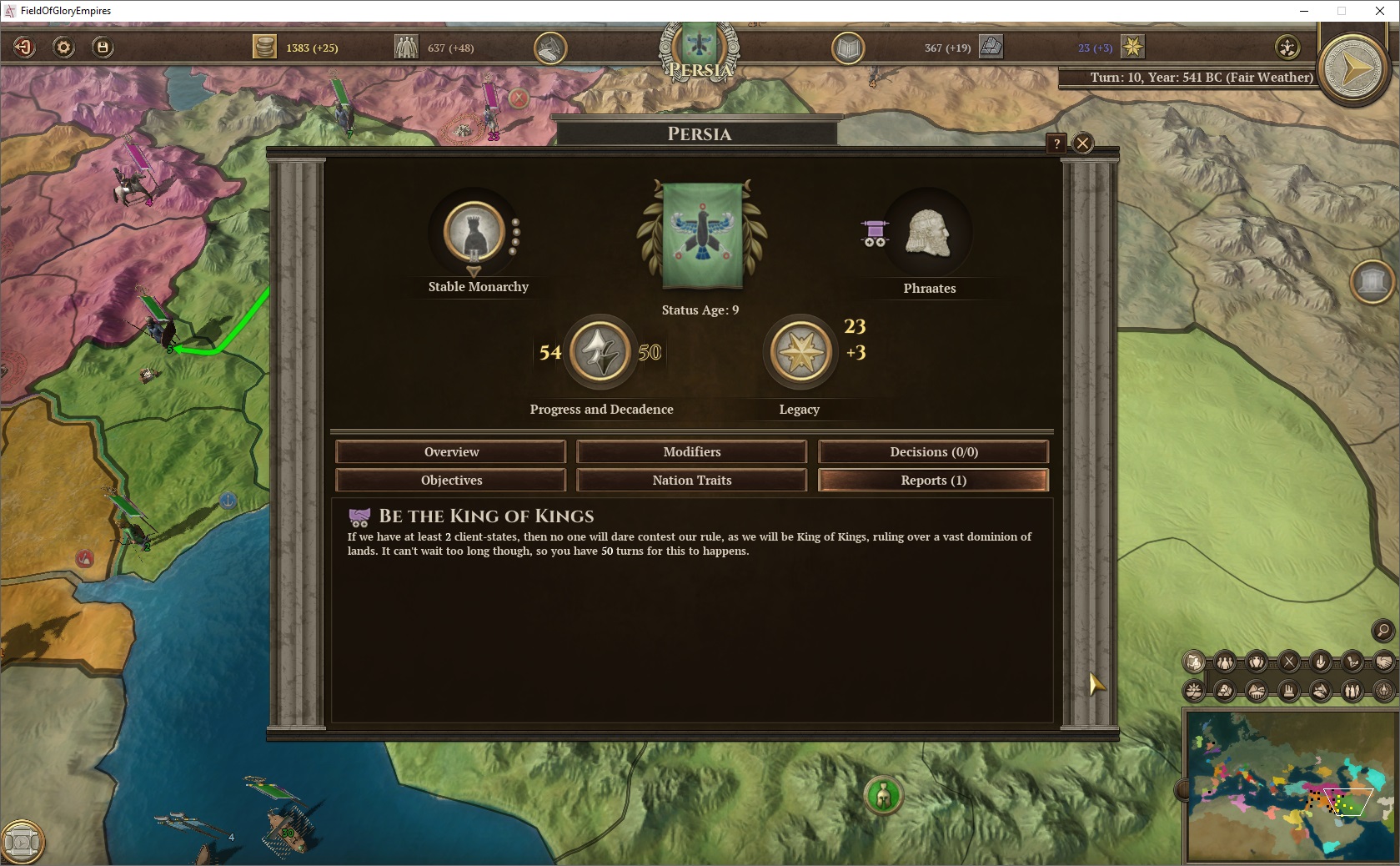 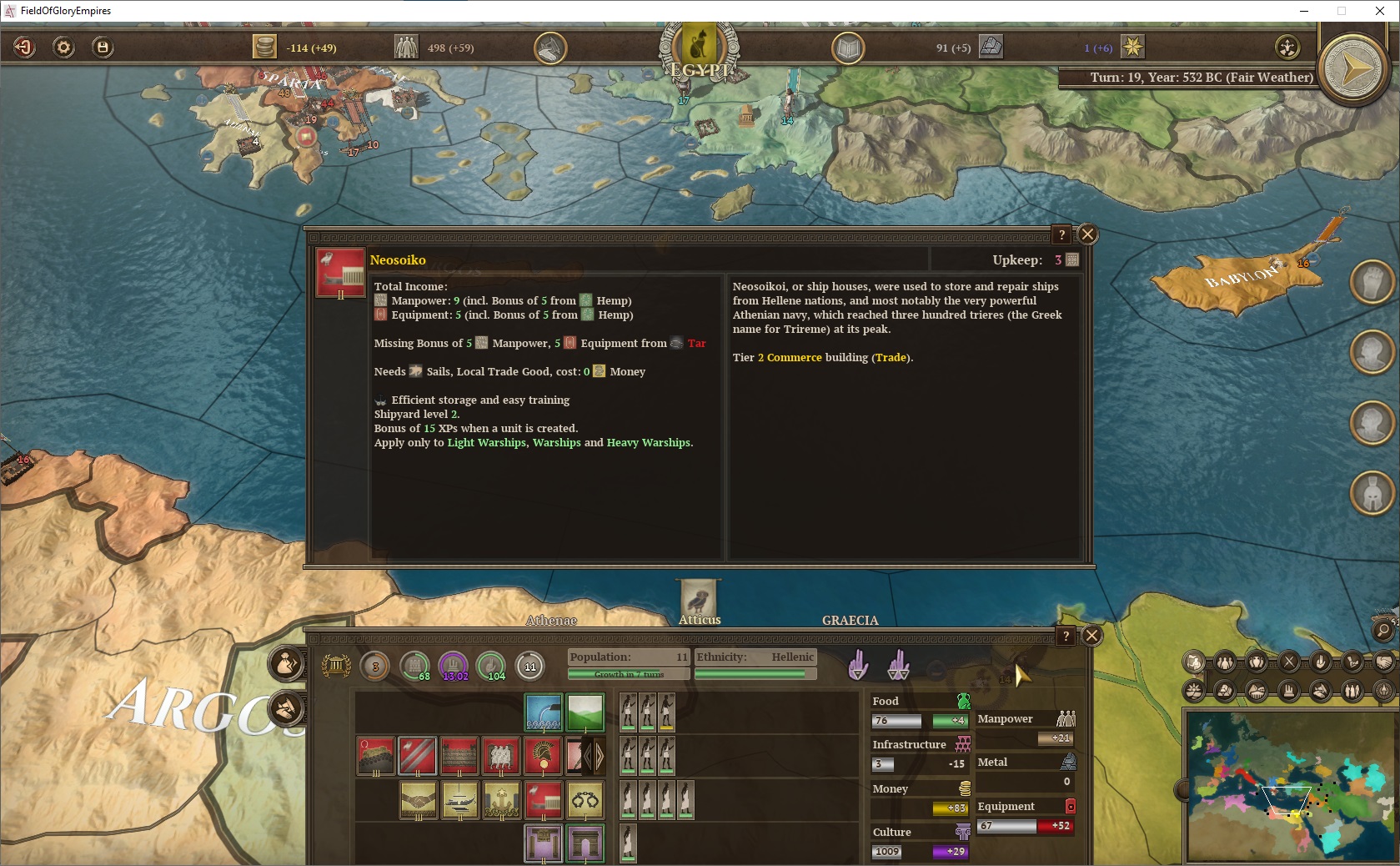 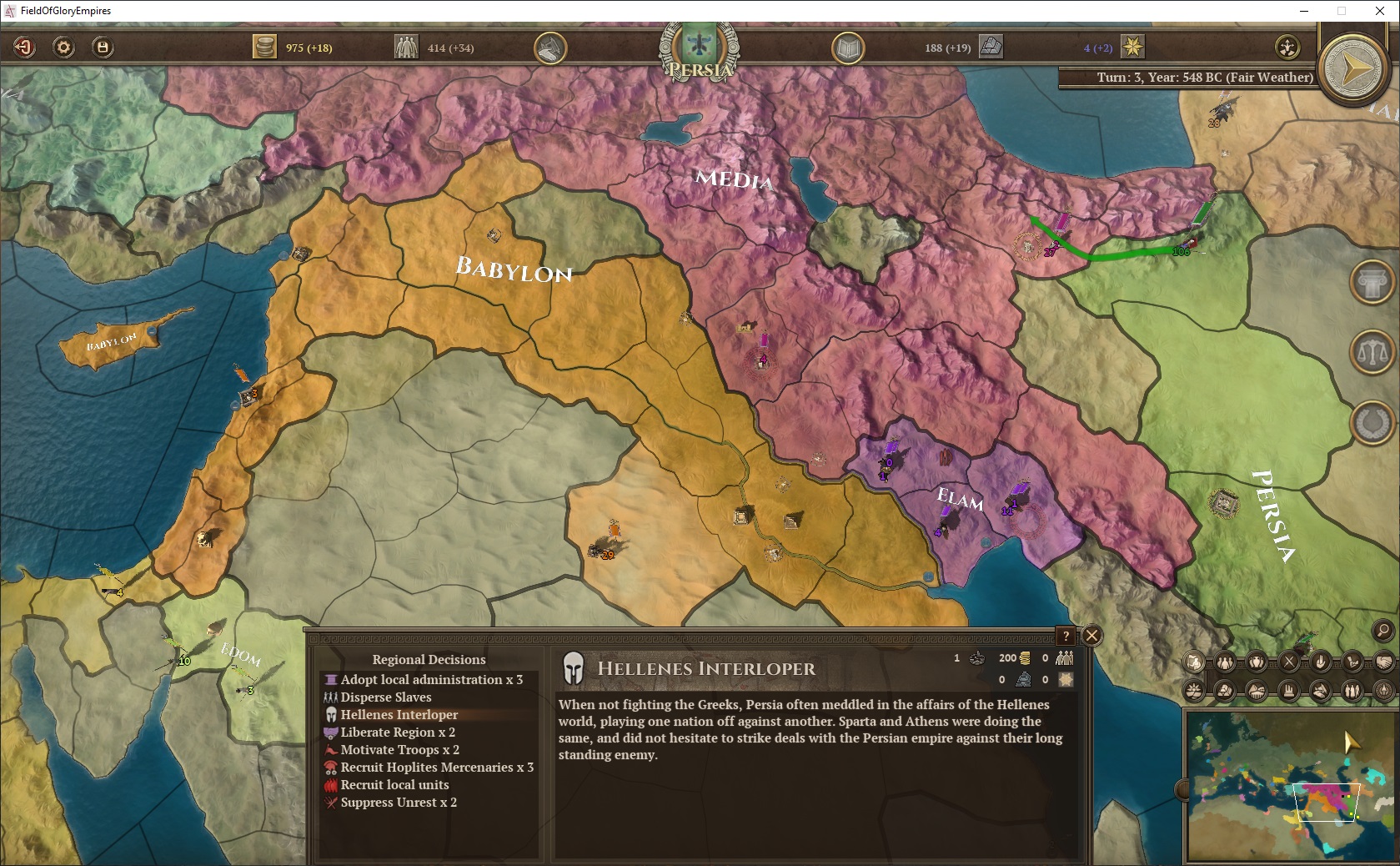 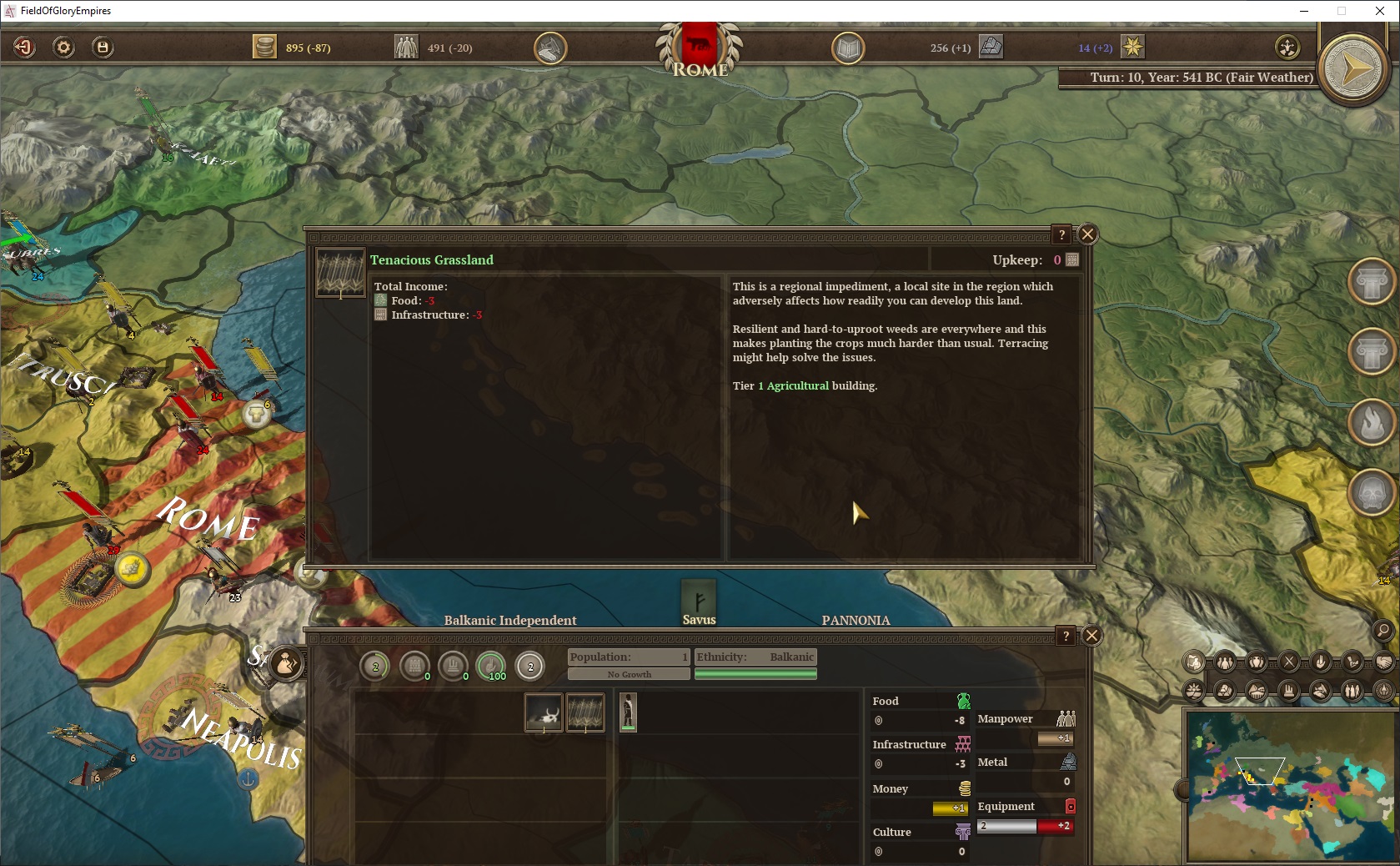 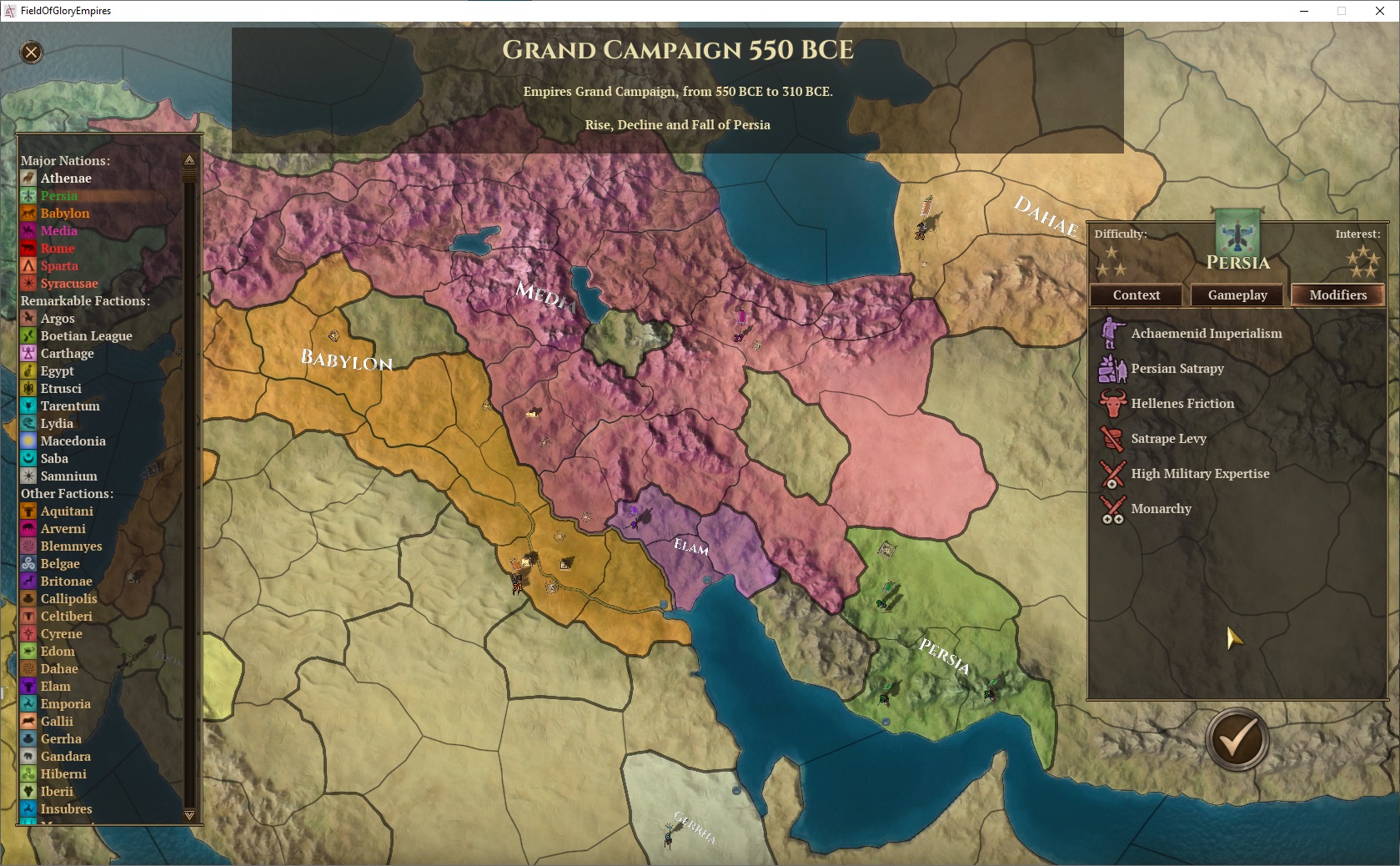 Field of Glory: Empires is a grand strategy game in which you will have to move in an intricate and living tapestry of nations and tribes, each one… 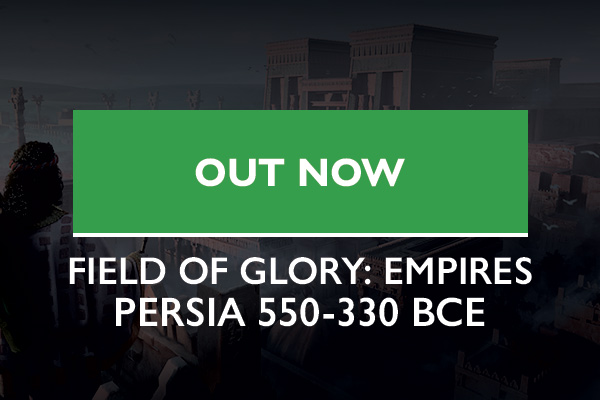 May. 21, 2020 - With Field of Glory: Empires, players conquered the Mediterranean in the Roman era. Now, it’s time… 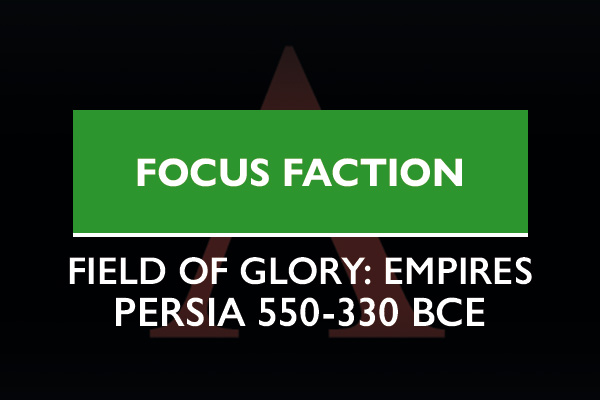 May. 21, 2020 - Sparta starts strong, with a very powerful army, and as such should not have too much of a problem… 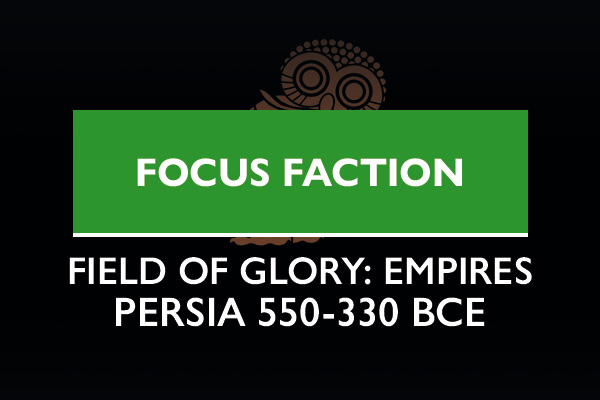 May. 20, 2020 - The best starting strategy for Athens is to be careful on the military front whilst trying to be… 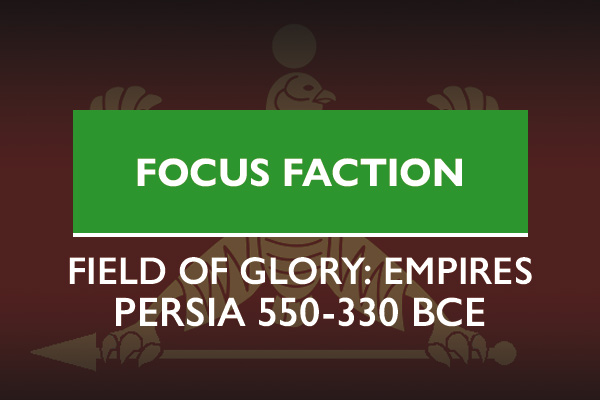 May. 14, 2020 - Persia will be the nation that sets the tempo of the campaign for a long time. The speed will define…

This DLC showcases the lightning-fast ascension of Persia from a humble kingdom to one of the largest empires history has ever known. Initially, as Cyrus the Great, you’ll have to overthrow powerful neighbors, like Media, your former liege, Ancient Babylon and its mighty cities, or Lydia, ruled by Croesus, a man rich beyond dreams.
But that’s not all, as Athens and Sparta are vying for supremacy over the Hellenes world, and soon the Aechemenid Empire and the western nations will be on a collision course. These three have a low chance to stay at peace for long, so be always on the lookout for opportunities.

If you prefer to play as the underdog, a certain modest city in Italy might perhaps be a surprising contender. Or perhaps the young city of Carthage, its new empire still far from assured. Opportunities abound!

Regional decisions
Each nation will get a new set of tools to further its goals, namely regional decisions. And because sometimes you might want to perform a certain action in a certain location, we are providing you with the opportunity to federate some barbarians, form up a new colony, force march an army or even prospect for natural resources! But that’s not all, because in addition to the 15 decisions every nation can use, Persia, Athens and Sparta have a few decisions unique to them, adding to the historical accuracy of the game. Intervening in Hellenes affair, declaring the Olympic Games or recruiting mercenary hoplites, to name but a few, will all be possible actions.

Impediments and Boons
The new campaign starts two centuries before the Empires campaign. To keep the experience focused on the important nations of the time,while at the same time adding replayability to all games (including the base game), we have added numerous peripheral regional impediments and boons. These are special natural sites that will often hamper development in numerous ways, until you fix the issue (if that’s even possible). Boons are the positive flipside of impediments and are rarer but will make certain regions even more unique. To give a few examples of each, you might encounter Impenetrable Forests, Nauseous Swamps, or Bandits, or might be blessed in some select regions by rich soil, an oasis or a sacred grove. With more than 80 Impediments and Boons, expect the unexpected and that no two games will be the same!

Special content
As you might have guessed, the major nations of the period have received special treatment. Don’t expect to play Persia as you would play Athens or Lydia, this is simply not possible! Each nation, through events, missions, national modifiers, special units and specific buildings, will play differently. We know that many of you enjoyed the varied regional content in the Empires base game. We have taken the same approach here to deliver a whole new gaming challenge. Add to that regional decisions and impediments, and you’ll need to devise new strategies to win the game.

Each nation will get a new set of tools to further his goals, with regional decisions:

The new campaign starts 2 centuries before the Empires campaign.

Numerous peripheral regions impediments and boons have been added. For instance:

There are more than 80 Impediments and Boons

Major nations of this time have seen a ‘special’ focus. Don’t expect to play Persia as you play Athens or Lydia! Events, missions, national modifiers, special units and specific buildings will make you play differently.

Base Games (one is required)
Field of Glory: Empires