Command a true operational structure. Can you balance and prioritise three different Theatres in order to achieve your objective? 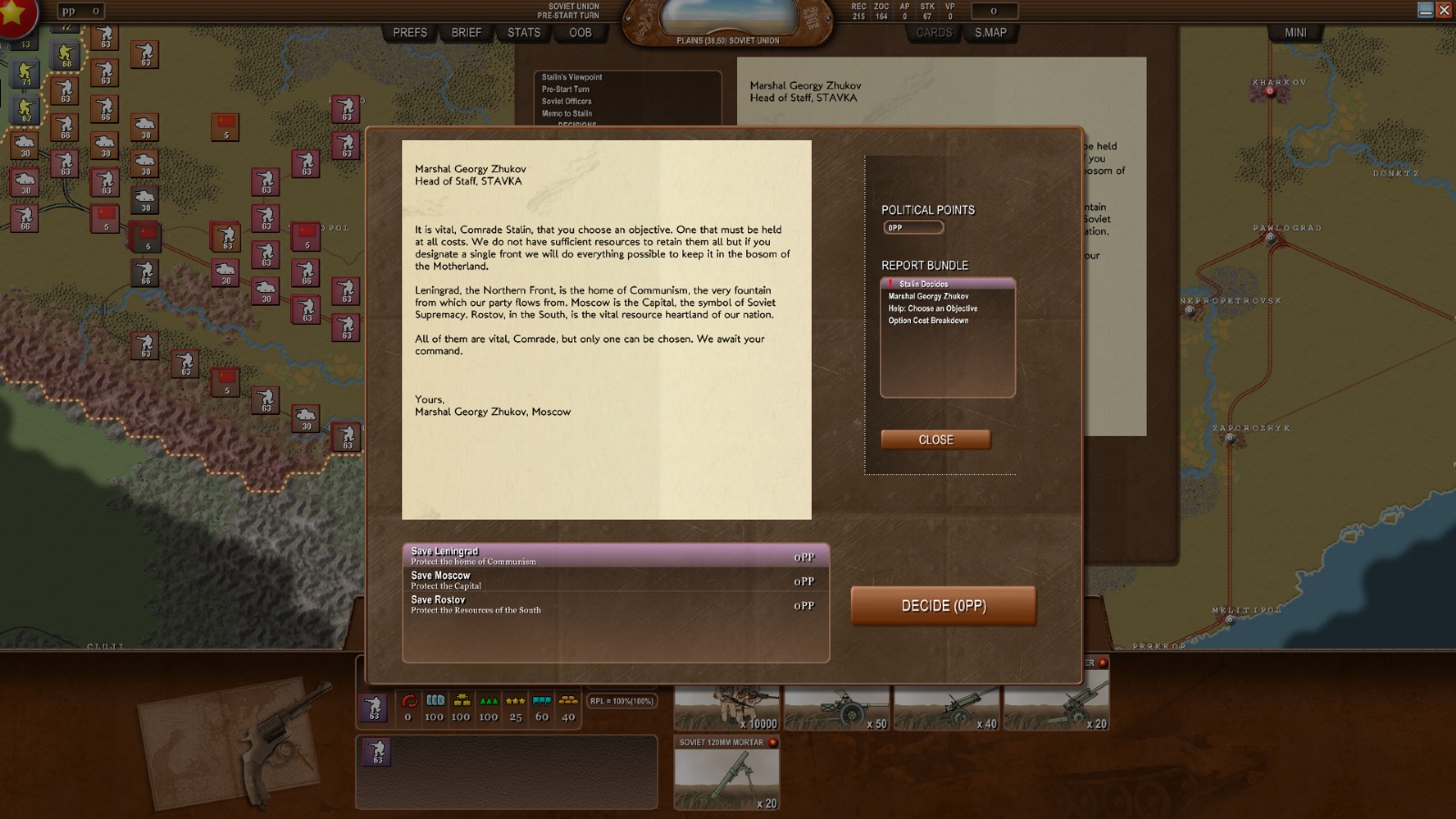 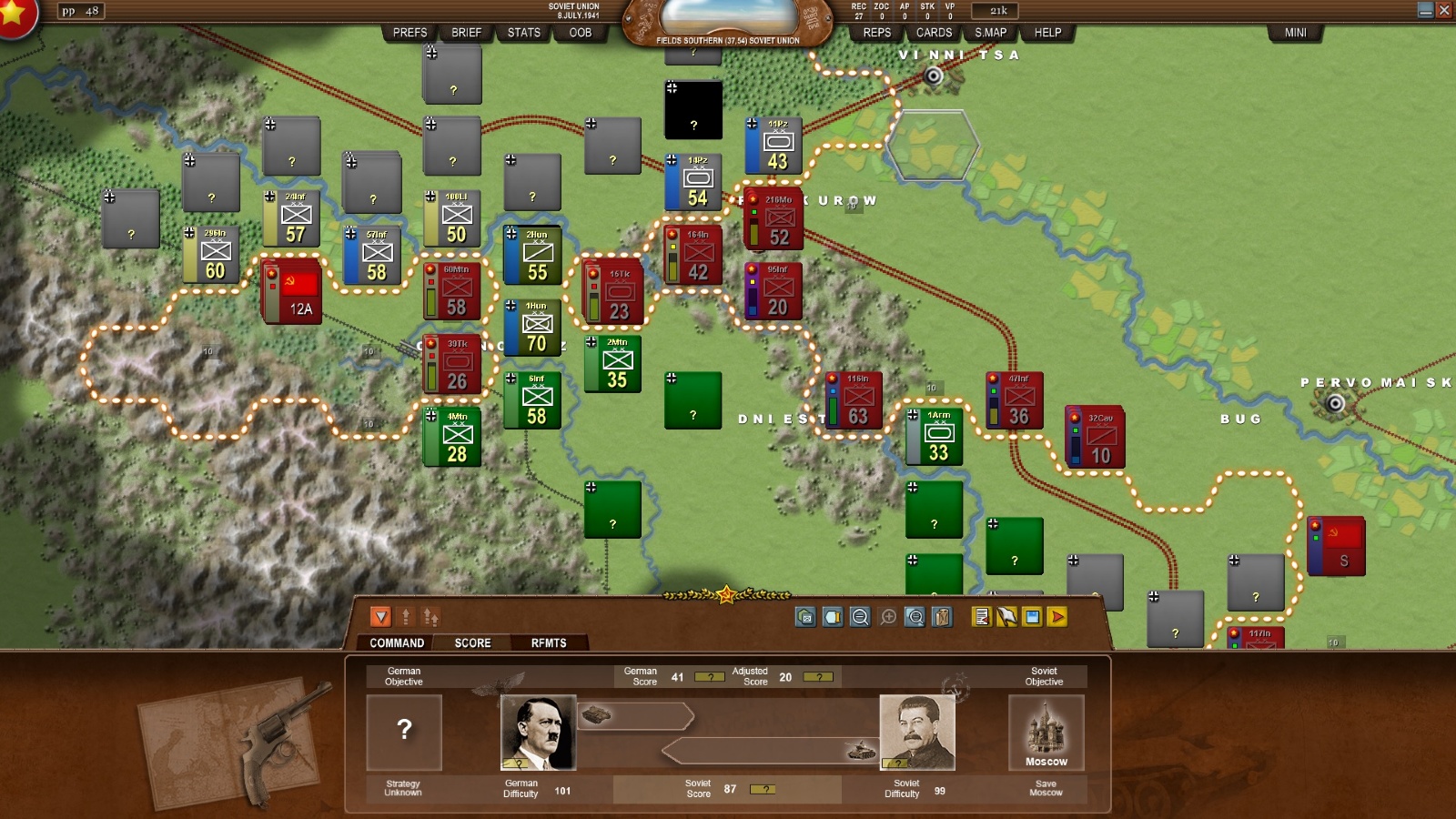 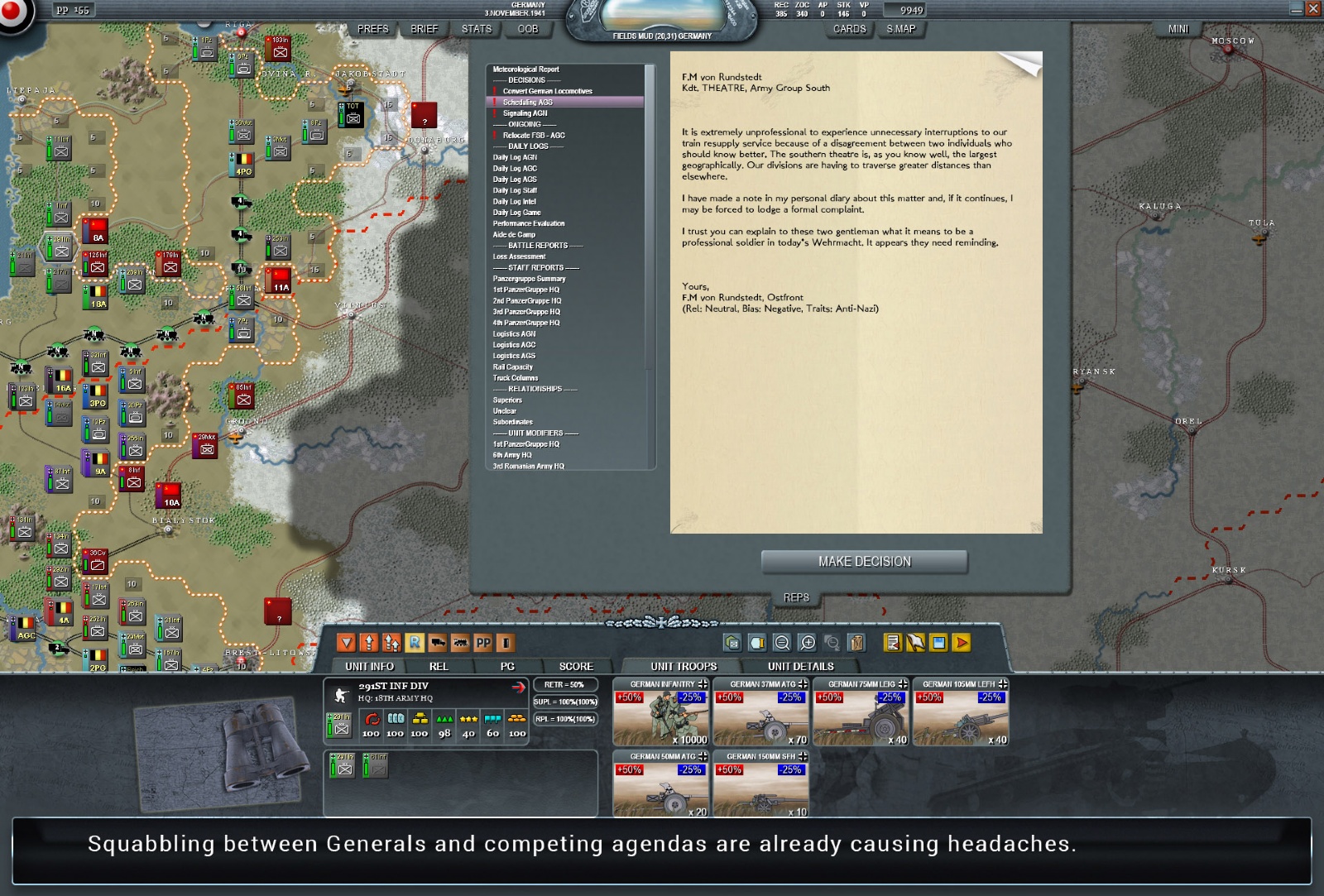 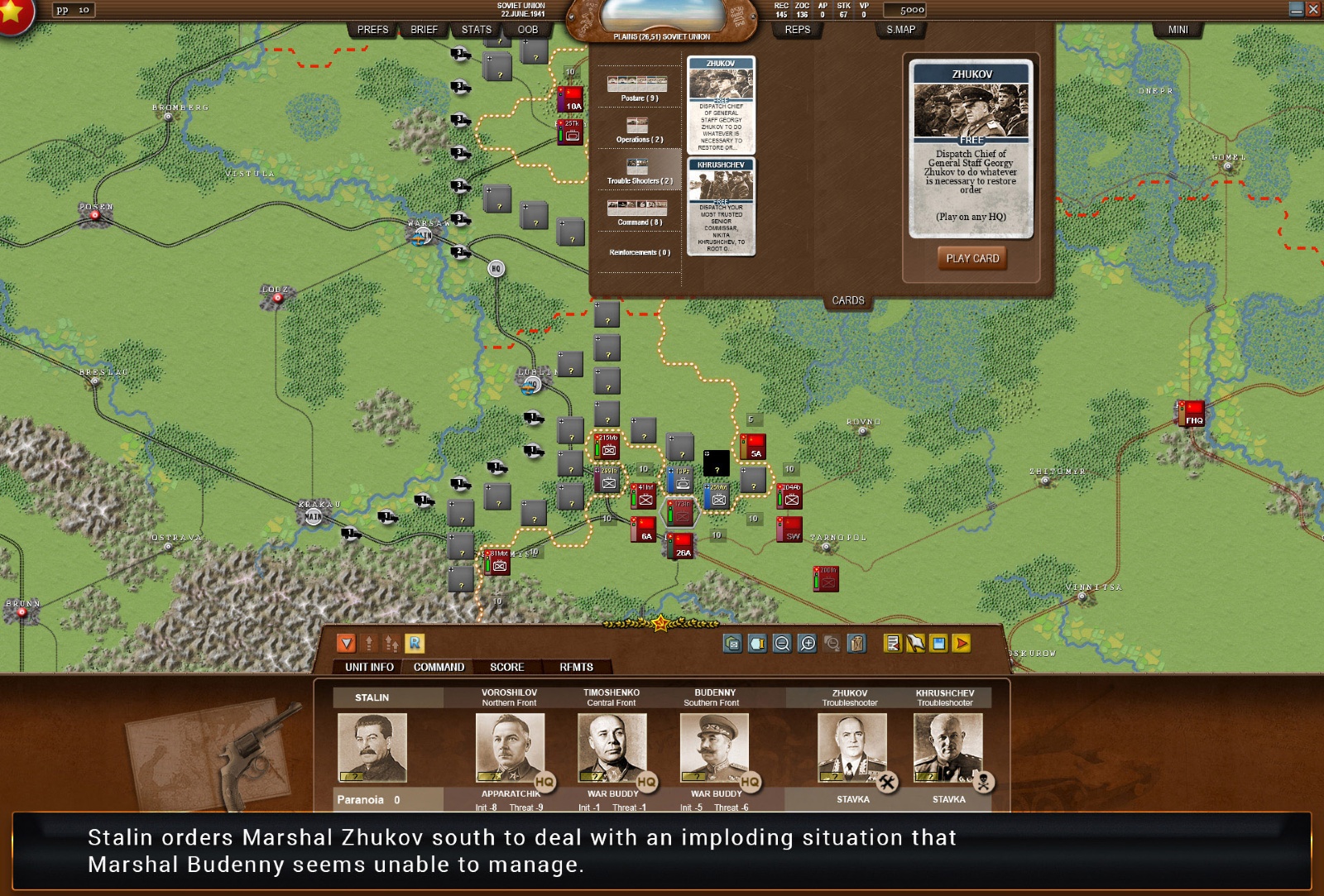 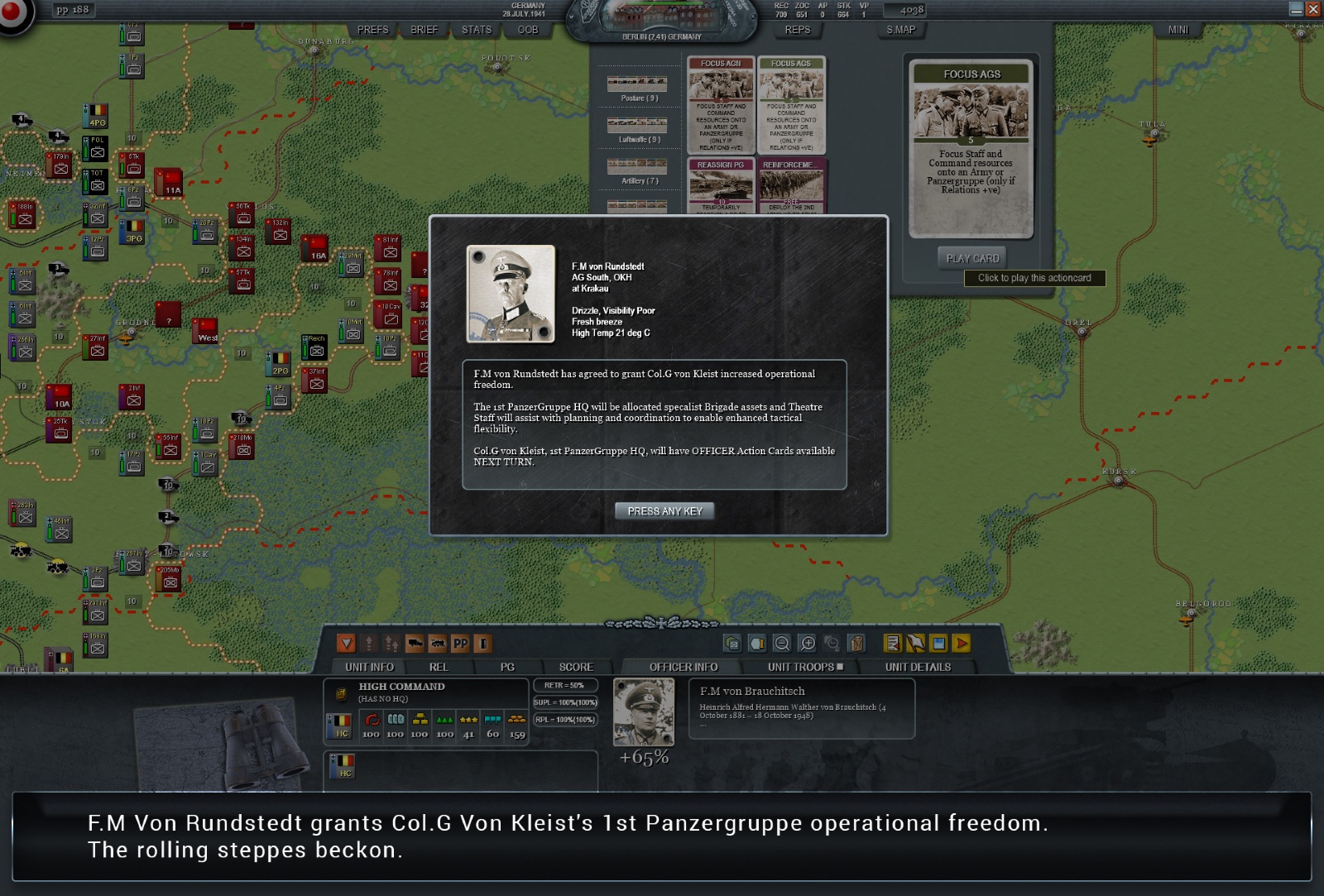 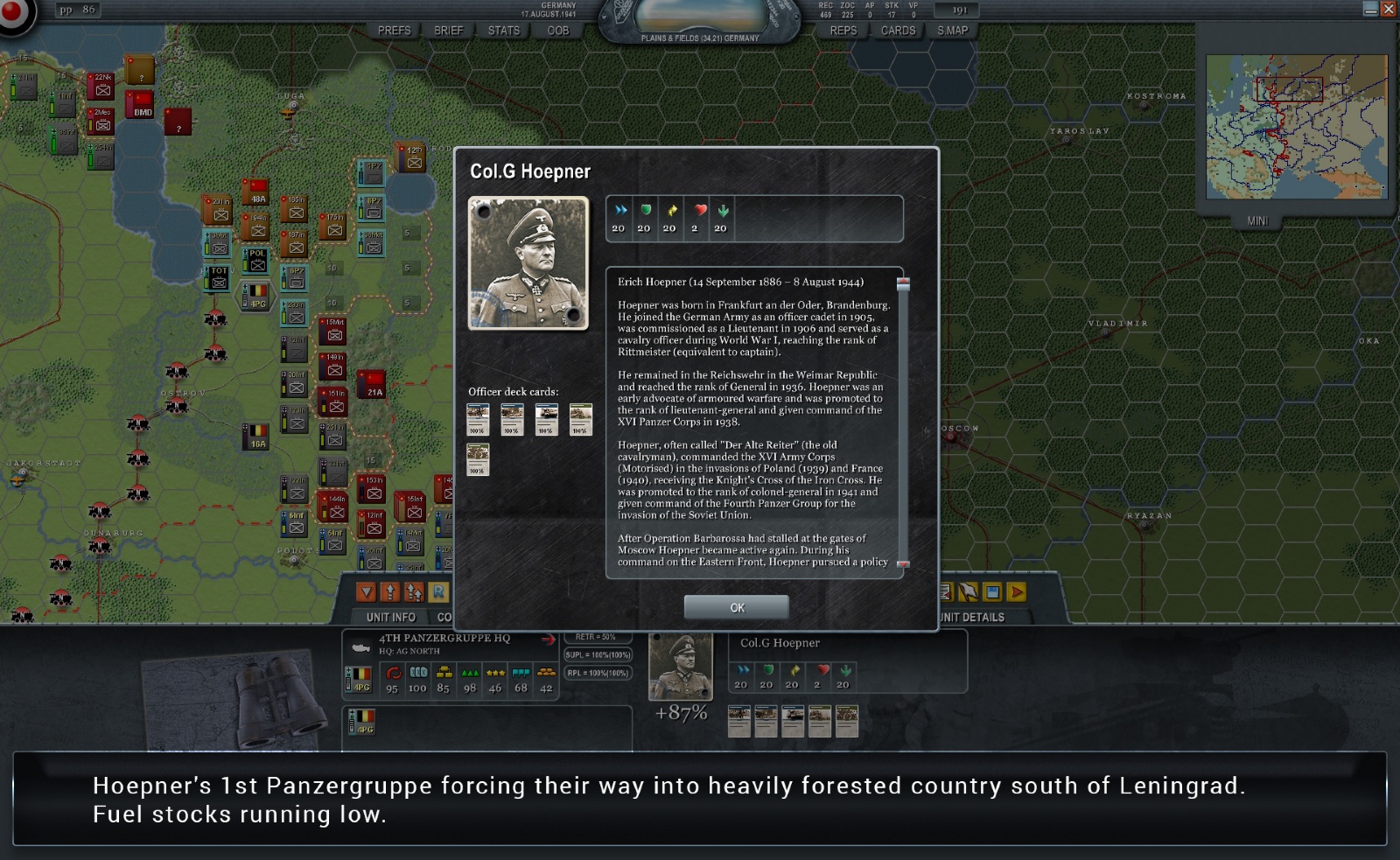 Aug. 29, 2017 - Welcome back! Today we want to highlight a Decisive Campaign: Barbarossa After Action Report! We…

Aug. 23, 2017 - Today, we are going to highlight a cool Decisive Campaign: Barbarossa mod that was made by…

VR Designs has been reinforced with designer Cameron Harris to create a new never-seen-before wargaming experience: Decisive Campaigns: Barbarossa. This revolutionary eastern front wargame covers the German invasion of the Soviet Union in 1941. It blends the latest evolution of the Decisive Campaigns hex and counter engine with deep narrative, RPG-style people management and in-depth semi-randomized decision systems. Will you be in Moscow before the blizzard hits?

You are in full operational command. Can you make the right decisions to turn the tide of war?

Operation Barbarossa. The largest military conflict in history. June ‘41 to February ‘42. Hitler’s attempt to tear out the Soviet jugular. Divisional scale. 30km hexes. 4 day turns.
Strongly defined personalities under pressure fighting a war. Fighting for their own corner and agenda. Equally capable of helping or hindering. Decisions. Delegation. Can you balance and prioritise three different Theatres in order to achieve your objective?

Are you able to work within a Command Hierarchy with both Superiors and Subordinates in an environment where strategy and politics often conflict? Focus on what’s important, ignore what isn’t and execute a winning strategy in order to overcome a take-no-prisoners AI or a devious meat brain. Set Army postures, assign Theatre based Artillery, allocate Tactical Air Support and order your Theatre Commanders to provide specialised battalions and staff assets to the Panzergruppe or Army of your choice. Don’t be upset if they refuse.

Deal with the Dark side of the war. Trade ethics off against operational imperatives. Answer to a War Crimes Tribunal if you lose or order both sides to observe the Geneva Convention and fight a gentleman’s war. Watch as your logistical pipelines visibly stretch across the vastness of Russia behind your hard driving Panzer columns as they thrust and encircle. Decide when to order a temporary shutdown and relocate your Forward Supply Bases forward. Horde your precious truck columns and hope that your locomotives can cope with the washouts, collisions, partisans, lack of signals, poor quality tracks and frozen water pipes typical of the Ostfront. Order the Luftwaffe to fly emergency resupply missions when it all goes wrong. Receive a detailed High Command assessment of your Command Potential each turn. You’re being watched and evaluated. Pour over a comprehensive breakdown of all your activity at game end.

Can you stand up to the Führer? Are you willing to put it all on the line, demand Military Independence, and risk being fired? Or would you prefer to toe the line and support the Führer in whatever goal he is currently fixated upon?

Swap sides and play the part of a ruthless Soviet dictator, backed into a corner, armed only with a rusty knife. Is your pathological urge to win enough to overcome your inner demons and redeem yourself by stopping the world’s most professional, undefeated, army from kicking down the gates of Moscow? Recall who left those gates unlocked in the first place?

Be prepared to shoot your Marshals. Fling your troubleshooters from one crisis to the next. Hope that they don’t get delayed enroute. Ruthlessly feed your Conscript armies into the meat grinder, trading time and space, desperately holding on for Rasputitsa and the depths of winter. Prioritise one Front over others. Gather your Siberians and push back hard.

Every degree below zero matters. Experience the effects on men and machines of severe frostbite and blizzards. How far are you willing to push them? Pull a Panzergruppe out of the line for a refit or rest an Army. Do you maintain your Blitzkrieg or throttle back to a more sustained offensive posture to conserve fuel? FIght to get inter clothing and equipment for your men. Argue with Göring over fuel allocations. Order your individual Divisions to report their status. Fifty different stats and values are tracked for each.

Winter clothing and equipment for your men

Swap sides and play the part of a ruthless Soviet dictator

A solidly researched Historical OOB that covers a wide range of unit types and nationalities but one that keeps the unit count manageable and enables the game to be played in days, not weeks

A single, hand crafted, campaign that has significant depth and is designed for extensive replayability

Experience the myriad, conflicting, challenges of OPERATIONAL COMMAND in a no holds barred, knock down fight 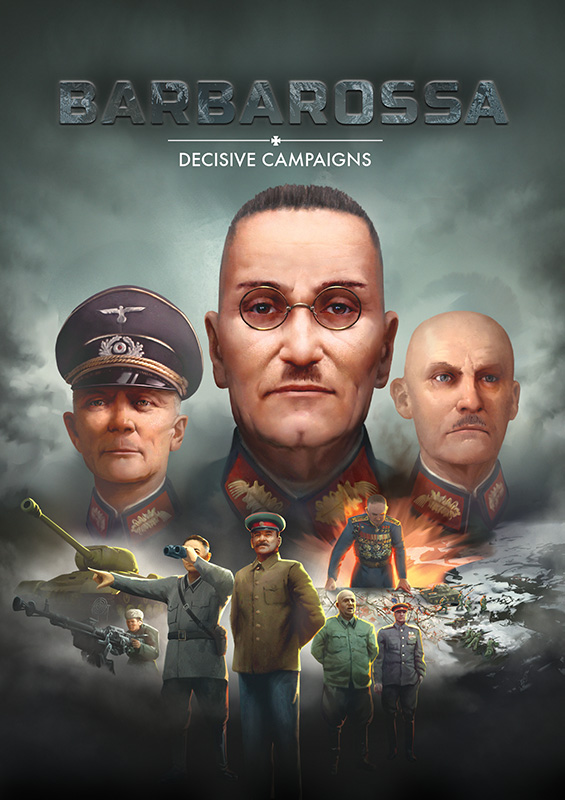 Color disk with Color Hardback manual
This edition comes with a full color printed hardback book as the manual, where the DVD is inserted in to the front cover with order details. Also includes a PDF E-Book indexed manual.

All the games of the Decisive Campaigns franchise in a convenient bundle
-10% $152.96