ok, I had to post this here as you rarely see the Americans do this well early game. 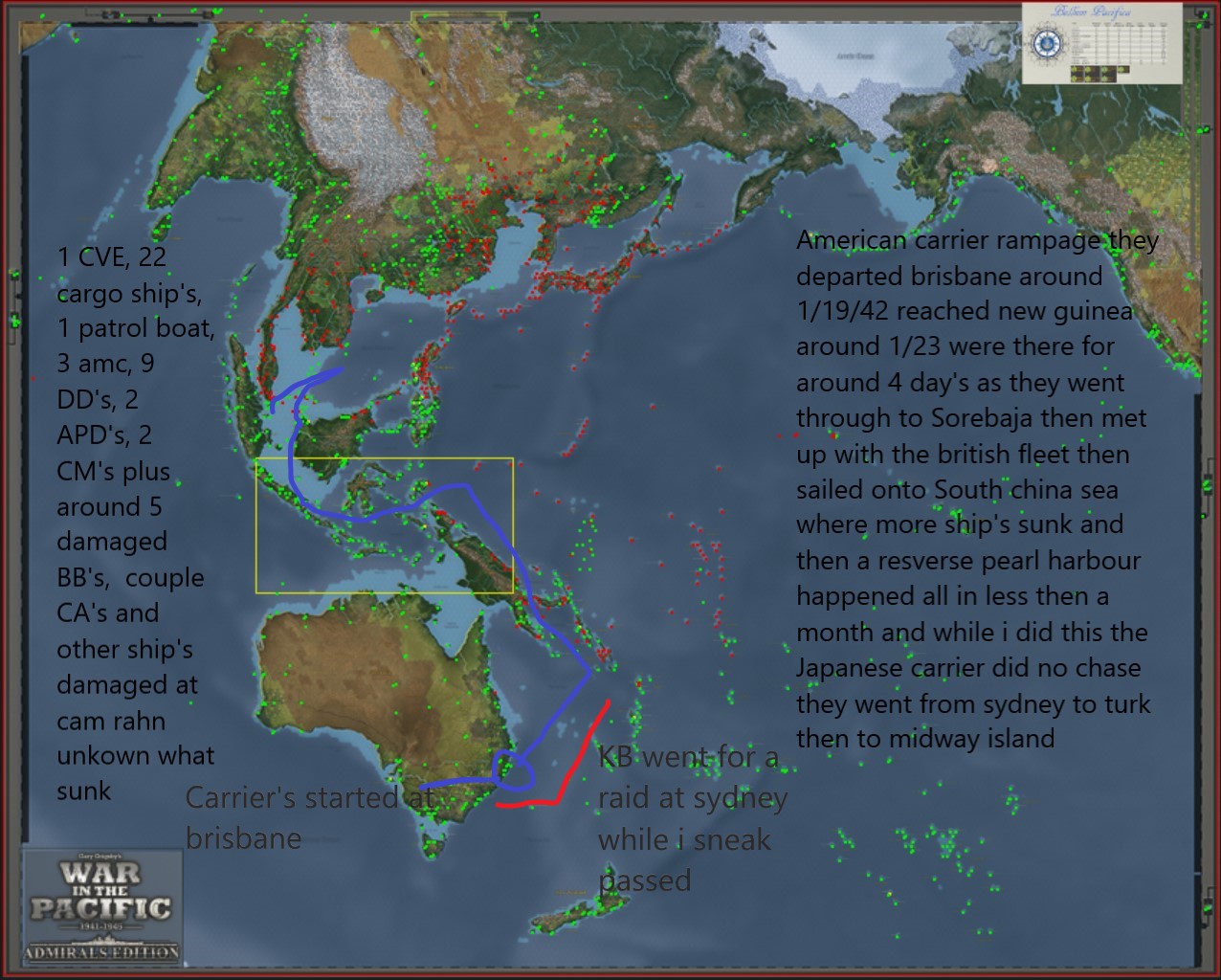 it's against a human opponent sorry for no clarification
Top

it's against a human opponent sorry for no clarification

Can you give me his address, I want to play him.
Interdum feror cupidine partium magnarum Europae vincendarum
Top

Now I am puzzled - this seems to have nothing to do with previous entries in this thread? [&:]
Did you post in the wrong thread RJ? Orm is going to be jealous! [;)]
No matter how bad a situation is, you can always make it worse. - Chris Hadfield : An Astronaut's Guide To Life On Earth
Top

At this point I'm going to come in only about the movements of the Raiders and what I did about it.

Initially the two groups of aircraft carriers must have passed by each other just a couple of hexes apart but failed to detect each other completely. I have never had this happen in a game ever before. It's truly amazing that we could have passed by each other (maybe 3 hexes!). My task force was there to block such an event happening in fact we detected some such aircraft over the oilers close behind but thought they were from a task force a little bit further away that task force was found to be a heavily laden troop convoy which was completely sunk. We then turned towards raiding Sydney. A couple of fighter sweeps over the base showed it was heavily defended so best avoided. The same turn the allies appeared amongst our troop convoys toward Rabaul most of which had fully unloaded already. There was substantial loss. Luckily not of troops.

Dean did not mention that as far as I'm aware Bettys from Rabaul (flying low evaded CAP) sank Saratoga and we lost a CVE.

The KB raced northward to try and block the allies from returning to any Australian base or head towards Darwin. Instead the allies made the very bold move of moving northward. I did consider moving toward Darwin trying to cut him off from a potential retreat but going also seems to be heavily defended (and my fighter pilots tired) . I decided to let them go at that point as there was not much to worry about - he has limited fuel after all. We did not realise that the plan was to join up with the British forces and head northward towards Singapore and right again from there. The raids from there were very bold and audacious I must say. He raided CB sinking a large number of ( big) transports that were loading with resources. In addition he then raided the port sinking several ships in port and damaging 5BB but none of them but none of them seriously. he also bombarded suspected Nell and Betty coastal bases successfully preventing a big counter attack.

Then the allied CV stood at Singapore taking everything thrown at them.

In the last turn since this post he raided again northward to KB taking out most of the torpedo boats in the Thai Navy before trashing the base again. But the Renown suffered one TT hit. The next morning the Renown was sunk by Bettys from Bangkok.

All in all its all playing down to the wire. this mod is designed to have lower tech at the start and the British, Dutch and Australians are all stronger. Both sides have less tech and the Japanese LBA is hindered by the delays in arrival of better aircraft. Oscar 1a and b really get shredded by a combination of F3F Wildacats, Hurricanes and only just overcome Skuas and Rocs on British CV.

Needless to say all routes out of DEI/ Malaya will be hot...

Mod is available here and on the Moding pages if interested.

Now I am puzzled - this seems to have nothing to do with previous entries in this thread? [&:]
Did you post in the wrong thread RJ? Orm is going to be jealous! [;)]


Someone posted about how his American carriers are going on a rampage so I thought that I would show two of my IJN CAs having fun and a little success with a long range, Long Lance torpedo strike although each CA had only one Long Lance hit at 21k yards . . .

Let Orm be jealous, he can go to that little town in Norway anytime that he wants to . . .
Seek peace but keep your gun handy.