When we first tested KarlTaco’s AB1943 mod back in April, it consisted of "only" the Red Army, Red Army Guards, and the Wehrmacht.

In the last nine months, it has become not only the most subscribed Armored Brigade mod, but probably the largest too, by a wide margin, reaching almost 2000 units and their variations. It first expanded to the Western Front, introducing new factions such as the Waffen-SS, the United Kingdom, and the United States Army. While they are surely as thorough as the other three factions and benefit greatly from the purchasable Ardennes map, they are a natural and, to some extent, saturated option for World War II. However, what comes as a thrilling novelty is the bold change in the theatre of war, one that pushes the limits of the engine to the limit. Now it is the turn of the Pacific, with the United States Marine Corps and Imperial Japan (combining Imperial Army and SNLF) as newcomers. 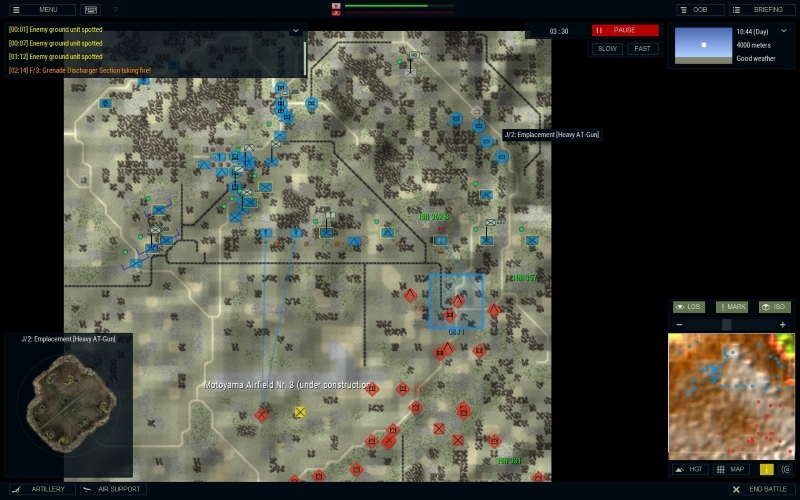 A precept in the Imperial Rescript to Soldiers and Sailors states that "duty is heavier than a mountain; death is lighter than a feather"

For the first six months after Pearl Harbor, the Empire of Japan swept across most of Southeast Asia and the Pacific with impunity. The Japanese had forced General Douglas MacArthur to flee the Philippines by the end of March 1942, having conquered Wake Island, Malaya, the Netherlands East Indies, and most of the islands to the north and east of Papua New Guinea. When the Japanese forced 75,000 malnourished and ill American and Filipino POWs to walk more than 90 kilometres in the searing heat with no food or water during the Bataan Death March in April 1942, there appeared to be little hope for an Allied victory. However, the tables had suddenly turned with the US strategic naval successes at the Battles of the Coral Sea (May 7–8, 1942) and Midway (June 4–7, 1942), and the Japanese Imperial Navy was no longer capable of major offensive campaigns, allowing the Allies to launch their own Pacific counter-offensive. The next crucial move took place two months later, on August 7, when the 1st Marine Division stormed Guadalcanal. The Guadalcanal campaign lasted for nearly eight months and involved sea, land, and air forces in a joint effort, coinciding with the colossal battle of Stalingrad, which marks the starting point of the mod too. Over the next two and a half years, the United States drew closer to the heart of the Land of the Rising Sun with each island it took. Growing superiority at sea and in the air, as well as in the number of fighting personnel and weapons, gave the United States increasing advantages. Nonetheless, wherever US forces faced Japanese defences, the enemy fought back ferociously until succumbing. As the grip tightened around Japan, drawing the war to an end, the Japanese fought with everything they had, and the casualties piled up. The final nine months of the war in the Pacific produced some of the most violent and deadliest fighting of World War II. 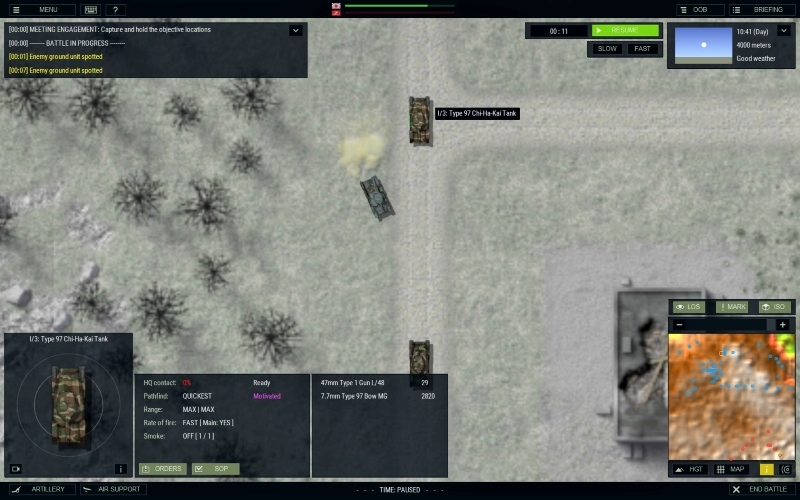 Although it was not uncommon for troops to be equipped with trucks, tankettes, or light tanks, the Imperial Japanese Army lacked mechanisation in general. The Southeast Asian jungles and the Pacific islands were unsuitable for large-scale armoured operations, thus the Japanese armoured force was used as an infantry support arm piecemeal.

Often, when people think of the Japanese military during World War II, they think of formidable Zero fighters or soldiers fighting to the death, not tanks and armoured cars wreaking havoc on unsuspecting foes. The prevalent picture of Japanese tanks is of small, thinly armoured, and undergunned vehicles that faced far superior tanks fielded by the Allies—hardly appropriate for a game titled Armore Brigade. The Type 97 Kai (also known as Shinhoto Chi-Ha), the bread-and-butter of your armoured force and a medium tank in all but name, weighed just 15.8 tonnes with a high-velocity 47mm gun and only about an inch of armour at its thickest. By comparison, an American M4A3 Sherman medium tank weighed 33 tonnes, featured a 75mm main gun, and had at least 2.5 inches of frontal armour. And yet, the Imperial Army used tanks extensively during the Interwar period. In the 1920s and 1930s, an innovative Japanese tank program, inspired by European designs, supported their efforts in China prior to the Pacific War. Tanks were crucial in Malaya and the seizure of Singapore during the subsequent struggle against the Allies, as they were used imaginatively in jungle terrain previously deemed inaccessible by such vehicles. The Japanese tanks that saw action in the Pacific War were not bad by design, but they were built as instruments of assault and infantry support in places with limited infrastructure. Japanese infantry commanders found their armour capabilities suitable, leading to little incentive to improve
upon them. On the other hand, the M4A2 or M4A3 Sherman had significantly better armoured protection; the Sherman was impervious to most Japanese anti-tank weapons except at close ranges,
and Japanese tanks had never posed a serious threat to the Americans, who possessed a diverse arsenal of weapons capable of destroying them. On Okinawa, General Mitsuru Ushijima, commander of the Japanese 32nd Army, noted: “The enemy’s power lies in its tanks. It has become obvious that our general battle against the American forces is a battle against their … tanks.” 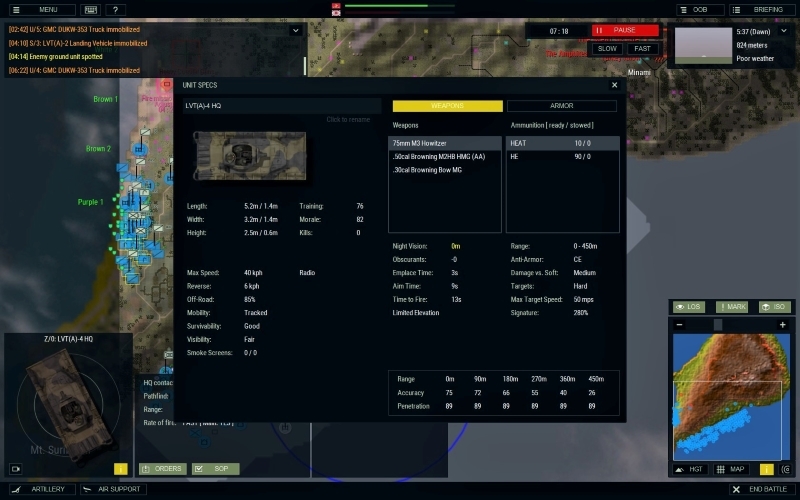 Another unique feature of the USMC is the amphibious tank (amtank) or amphibious tractor (amtrac). The amphibious tractor was now armoured and armed as an infantry assault vehicle, leading the assault waves to the beach and assisting tanks in destroying fixed fortifications with 37mm and short 75mm turret cannons. Their success in operations remained vital to the assault phase and continued support.

However, the greatest hurdle in modding the Pacific War probably lies in surpassing the limits imposed by the mechanised-centric Cold War engine. The image of American troops fiercely fighting their way through booby traps, Banzai charges, and surprise attacks while stalwart dug-in Japanese defenders struggled against overwhelming enemy power in the air, on land, and by sea is challenging to model when underground tunnels, cave networks, or melee combat are not supported. This is partially remedied by the wide assortment of field emplacements available to the Japanese, ranging from small bunkers and MG nets to large AT emplacements. The second approach is the Iwo Jima map, available on Steam Workshop and made by Valdemar, who skillfully and accurately recreated the infernal island with steep dunes of soft, grey volcanic ash, which make getting sturdy footing and passage for vehicles difficult. While Mount Suribachi provides a great vantage point, the distinctive landscape on this map allows for brutal close-quarter engagements because line-of-sight is frequently in the 200–300 metre range or less. 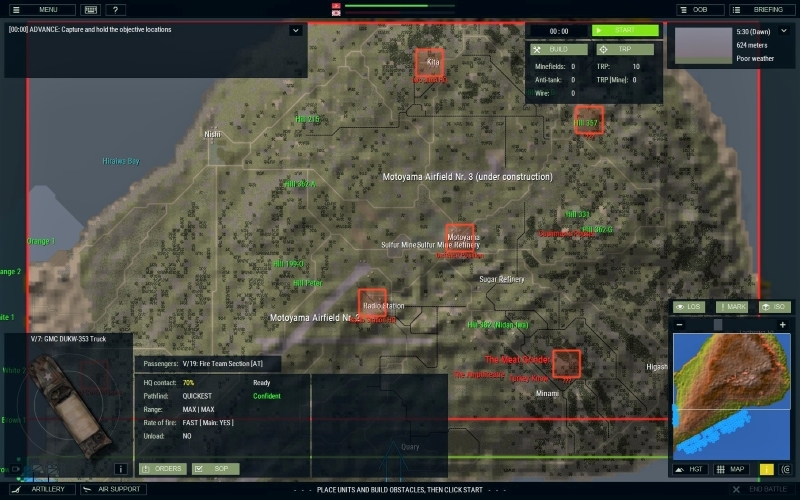 For both sides, the fighting that took place at the start of 1945 was among the most intense they had witnessed during the Pacific War. While the savage urban guerrilla warfare was taking place in Manila, the US Marines of the 3rd, 4th, and 5th Divisions invaded Iwo Jima. It is an eight square mile volcanic island with no harbour, yet it provided strategic benefits to the US Army Air Forces. It was possibly the only island battle in the Pacific War in which the US sustained more casualties than the Japanese, with 27,000 Americans killed or injured

Americans faced even worse on Okinawa, the natural springboard for an invasion of Japan’s home islands, and the final major battle of World War II. Following Okinawa, it became clear that the next invasion would take place on Japanese soil, with the Japanese refusing to surrender. An invasion of mainland Japan was expected to result in well over 400,000 casualties. The invasion was never carried out. With the dropping of atomic bombs on Hiroshima and Nagasaki, the war was abruptly over. KarlTaco's stated immediate goal is to continue developing and tweaking the database and contents, such as campaigns, while he may extend the timeframe to early conflict in the future. We might also see new maps such as Tinian and Saipan in the future. Any help, even if it is in the form of critical criticism, is greatly appreciated. This mod is a never-ending source of challenge and excitement for anyone who has ever been fascinated by the fury and vastness of World War II.
Top

That is interesting, been looking for combat sims that cover in the Pacific during WW2. I still have this campaign series, that cover it and wasnt too impress with it due to old graphics and setup. It was fairly slow process.

I need to look into this. Could someone make a video of this on youtube, so i can decide to buy this and use this mods? Also how easy is to mod this setup, incase i have a sim going with my wargame in the Pacific during WW2.