That question came many times and no one can really give a final decisive word on it. The problem already starts which aircraft parameters should be compared. The list can get very long from simple performance aspects like max ceiling or thrust, to more convoluted ones like thrust-to-weight ratio, number of long range missiles. A second major problem is that BVR combat depends a lot on tactics and on the weapons being carried. And particular weapons are definitely not the same. So I decided to give a shot to answer that question in Command Modern Operations.

I run a simulation in CMO using LUA to set up the combats automatically, control the results and interate over al possible combinations. The BVR contest ran in three steps. The first one included all acft and its BVR loadouts since 2000 in the DB of CMO. In total there were about 2294 entries (many acft were fighting with different loadouts, including SARH missiles). Each acft fought each other 5 times with a duration of 10 minutes each sortie (game time). The simulation was run at max speed, what in my PC took a few hours. If an aircraft shot down the oponent it got 1 point. If both shot down each other in a exchange missiles, then both got 1 point.
A second run was done with the best 116 under the same rules.

The top aircraft after these two runs, with its best loadout ranking, were then chosen for a final contest. Some acft were represented many times in the top rankings with different loadouts, but only the best ranked loadout of each aircraft was chosen to move to the finals.
These acft are the following (alphabetical order):

No surprises here, isn´t? All top tiers are represented as expected. These final 31 players were then put back in the BVR arena to fight each other one final time. Same scenario, duration and number of combat. Wins gave 1 point and losses subtracted 1 point (!). So, max points woult be 310 points and min points would be -310 points.
And here are the results: 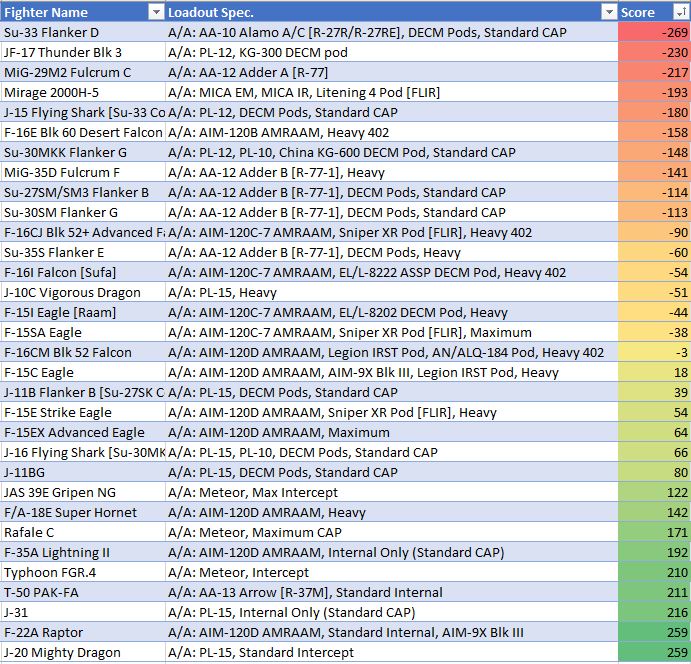 Some interesting stuff here:
1) What I found very interesting is how close matched is the latest Rafale C, the Typhoon FGR.4 and F-35s are. Out of 310 combats, these guys have similar exchange ratios.
2) Grippen is not bad, but is the cheap cousin of the other europen fighters. But better than all Eagles and Vipers around. This is probably due to the Meteor.
3) F-15s/F-16s are in another category in comparison to the latest Rafale and the latest Typhoon. Even when carrying the long range AIM-120D, they got no chance against the Meteor and the european radar/sensors.
Top

That is indeed interesting, thanks for sharing that.

As missiles have a fundamental impact on BVR combat, it would be interesting to test the British F-35B with the Meteor missile too.
Top

Yes, I decided to put the F as the E to save "space" for other acft.
I dont know about the MIG-31 by heart right now. If I remember correctly, its agility in CMO is not so good, which makes an easy tgt for missiles.
Top

As missiles have a fundamental impact on BVR combat, it would be interesting to test the British F-35B with the Meteor missile too.

Yes, and I dont know why I did not test it!? Humm Maybe I am missed it. Will take a look on that.
Top

None of this accounts for having the worst pilot ever driving them! I bet I can make the J-20 far worse.

Is it all based on non-classified sources on printed or stated sensor\weapon hardware configurations and capabilities?

Are real world combat uses or occurrences (ie known capabilities) levied against what should\could work on paper or in research journals?


Thanks for your work!

It would be interesting to revisit this when the IR signatures of the VLO jets get adjusted. At present, the game only models VLO in the RF spectrum, but not IR. Significant when facing IRST systems capable of generating a firing solution. Ditto for including F22/F35's equipped with JATM...
Top

Thanks for showing this to us.
Top

I'm not sure if I should be surprised or dismayed at the performance of the higher-end PLAAF aircraft.
Top

I'm not sure if I should be surprised or dismayed at the performance of the higher-end PLAAF aircraft.


How little is known about these Chinese aircraft and their capabilities. OSINT tells us that 21 identifiable J-20 have been photographed, and maybe 23 in total have been manufactured. The performance simulated by CMO is largely an educated guess. I've seen requested DB changes shot down entirely that had more data than anyone does in regards to these aircraft.

Or we could be suspicious about why their performance in this simulation is so high. We know CMO is used by government entities. We see how many scenarios are released on the steam workshop in simplified Chinese.
Top

Are you saying the Chinese government is influencing CMO databases? Really?
You are like puss filled boil on nice of ass of bikini model. You are nasty to everybody but then try to sweeten things up with a nice post somewhere else. That's nice but you're still a boil on a beautiful thing! - BDukes
Top

Are you saying the Chinese government is influencing CMO databases? Really?


Maybe I am implying that it is a maskirovka of sorts, giving attributes and performance that is more favorable than reality. So they are deceiving the Chinese government or users.

Are you implying that the Chinese government doesn't have the ability or ambition to do such things? Can you support the performance stats with any data? Are you implying the attributes given to the J-20 in CMO are beyond reproach and totally accurate? Just saying their performance is a best guess. There isn't any OQE to say the J-20 in CMO is overperforming, underperforming, or accurate. I can think of several reasons why that aircraft would be given the benefit of a doubt in its favor.
Top

I'm not implying anything.

This statement implies that the devs are purposefully altering data to favor Chinese units. Did I read this wrong?
You are like puss filled boil on nice of ass of bikini model. You are nasty to everybody but then try to sweeten things up with a nice post somewhere else. That's nice but you're still a boil on a beautiful thing! - BDukes
Top

You read that correctly. I offered a possibility regarding CMO simulated capability compared to reality, in response to someone being impressed with the supposed capability of the J-20. There isn't enough information to say it is simulated "accurately" or not. I am of the opinion there isn't enough data to say it is overperforming or underperforming. That is part and parcel of CMO, where DB revisions occur as more open source information comes out.

Honestly I believe the performance of the J-20 in this excellent aircraft performance comparison is due to the PL-15. You can see this reflected in the lesser gen aircraft as well.
Top

This is quite amusing and it would be nice to be so important, but Occam's razor applies here.

It's really hard to find good quality data on Chinese platforms. US in particular and NATO aligned companies in general have a lot of open-source specifications in brochures etc. These are 'sales' values so we take them with a grain of salt.

The PRC and other non-democratic arms-producing nations are much more coy about the specifications of their equipment. If they are out there, they're grossly inflated. They also have state run media as their primary media interface with the rest of the word, anything that comes out goes through that first. Remember the 100mT torpedoes, nuclear powered cruise missiles with unlimited range?

The pros who use Command use their own data through the DB editing capability. That's where the juicy info is, and--quite purposefully--it has nothing to do with the dev team. The DB3K and CWDB are open-source only, otherwise we wouldn't be able to sell them.

I'm surprised the F-35 did so poorly relative to the J-31. I suspect this is mostly because of the PL-15's advantage over the AMRAAM, but agility may also be a factor. Looking at the DB that agility difference has me a little confused. Based on all the other statistics I would've figured the F-35 would have the better agility score. Does agility not represent what I think it does?
Edit: I'm also mildly surprised that the meteor seems to be superior to the AMRAAM, if only slightly. The meteor seems to have a lower signature than the P3I.4 (somehow, despite being larger and having those intakes sticking out of it.) but otherwise is identical in performance. Does the turbojet propulsion actually do anything different from rocket, even with both having the same speed and fuel consumption? Because if not it's literally just that lower signature. On the other hand, the DB seems to undersell the meteor, since it's no escape zone is far greater than that of the AMRAAM as I understand it.
Top

The J-20 is in the DB3k is purposefully gray. The not-so-subtle hint is US EOTS IRST is used. This is perfectly fine. What you want is an approximation of what is known and suspected with disadvantages and advantages modeled which it does. I don't think it's wise to discourage this unless you don't want them trying to model cool things. My approach to this challenge is to try and win. The gap between US tech and others is closing so might as well learn.

Anything with a modern IRST stands a good chance. Check out F-35, 2022 Super Hornet with AN/ASQ-34 or even an F-14D early-mid 2000's when still had Phoenix and nice IR sensor. Everything else substantially harder which feels right in terms of modeling.