It seems the launch altitude for (all) cluster bombs in CMO is wrong, CBUs, RBKs, BLUs, etc. Most of them are around 2-5k. Why is that? It seems someone got confused between launch altitude and burst altitude, perhaps?

Cluster bombs can be launched way above 20k. On top of it, the new WMCD, on the other hand, shows a minimun lauch altitude of 10K, which is also not correct: It can also be dropped down to few thousand feet.

Is perhaps the modelling of cluster bombs wrong? Cluster bombers can be launched from medium-to-high altitudes and set to open at different heights/altitudes depending on the weapon.

The database values are based on open source information as well as the advice of people who have deployed these systems for real.

The database is maintained by humans and while we don't get everything right, we really do care about improving any issues identified. Unfortunately we need more specific information to act on this report.

If you could provide a summary of suggested changes and some published references to support them we can prioritise accordingly. This might be a good opportunity for discussion about the modelling of cluster weapons in general, too.

(1) How a CBU mechanics work in RL

This is probably known for you, but may be not for everyone dealing with the DB.
Every CBU units can be set to a burst altitude or height, when the container opens and the submunitions are released. This altitude or heigth can be set on ground or by the pilot in the cockpit, and can be activated mainly in three ways, by barometric altimeter setting, by using radio/radar to detect the ground (height) or by a simple clock.

Just two examples in two different eras to illustrate
- F-16A/B/C allows to set in the cockpit the burst altitude. See F-16 Dash 1 and Dash 34 manuals.
- F-105D had to use CBUs to open at pre-designated altitudes.

In general, a CBU can be dropped from any altitude, while the burst will take place at a much lower altitude. The Burst Altitude can be some hundreds of feet up to 1-2K feet. This affects the spread pattern and bursting effectiveness.

I went through my library and selected some sources.

Korean AF F-16 BEM, Volume 5, 1 October 2005, page 8-37:
"Delivery of conventional ballistic bombs and cluster munitions at medium altitude is enhanced and simplified with the addition of the TGP"

Project Checo, Air Tactics Against NVN Air/Ground Defenses, 1967 Page 40
"The CBU-24 was a cluster bomb unit that was dispensed, not by tube delivery which necessitatedlow altitudes (50 to 500 feet), but by a canister which could be dropped in the dive mode from normal dive bomb release altitudes of four to six thousand feet." <- This is the typical early Vietnam era altitude band. In many combat reports, pilots describe using higher altitudes to avoid small caliber weapons but with bad outcomes due to lack of any strike precision. Remember CCIP has not been invented at that time.

Ticking Time Bombs: NATO's Use of Cluster Munitions in Yugoslavia, 1999 (and references herewithin)
"Thus for Operation Allied Force, the historical record and testing experience would tend to indicate that for every single CBU-87 used, there will be an average of some ten unexploded bomblets, and for every RBL755, there will be an average of five unexploded bomblets. Bombing in Operation Allied Force to date has been almost exclusively from medium altitudes (circa 15,000 feet), raising important questions regarding the ability to control the collateral damage effects of the use of cluster bombs, and the number of dispersed unexploded bomblets."
...
"Cluster bombs were used in attacks demanding dispersed yet fairly accurate damage against fixed "soft" targets (for example, radar, surface-to-air missile, and communications installations). Air-delivered cluster bombs were also in high demand for attacks intended to destroy Iraq's widely dispersed tanks, armored personnel carriers, and artillery guns. They were extensively used in attacks on the Iraqi transportation system as part of the effort to find and destroy mobile Scud missiles. Aircraft patrolling from medium and high altitudes randomly delivered cluster bombs on roads and highways, and around culverts and bridges suspected of being missile traveling routes or hide sites. From February 19 onwards, in addition, B-52 heavy bombers flying at extremely high altitudes dropped cluster bombs on suspected Scud launch areas and on roads leading to these areas, releasing bombs at timed intervals. Towards the end of the war, B-52 bombers, together with many types of tactical fighter aircraft, also delivered cluster bombs on tank and vehicle columns retreating from Kuwait, including along the so-called "highway of death."
..."One of the unexpected problems involved in medium- and high-altitude delivery of cluster bombs in Operation Desert Storm, even with the newer CBU-87s, was that the weapons began to experience what has been termed "excessively high dud rates"

I can also go through soviet/russian or french sources, but I think this portrays well that the cluster mechanics/DB needs an update in CMO.


Before I go through my point #3 "Suggestion on how to implement it in CMO", I would like to know if you have any question so far?

No questions, quite interested to hear the suggestions too [:)]

(3) Suggestion on how to implement it in CMO

I will go through some points, discussing a possible implementation while making some approximations to stay inside the scope of CMO.

First of all, cluster bombs should get a new entry in the DB (EnumWeaponType, "Cluster"). I guess this will be necessary to implement the new cluster logic suggested below.

a. Launch Altitude
The launch altitude of all cluster weapons should be increased (see previous post).
In general, 70s until early 80s, should be increased to 6K.
There are one or two exceptions to that. For example, early BL755 were designed for low altitude emplyoment.
Weapons after that period, in other words, more or less after the introduction of the CBU-87, should be increased to well over medium altitudes.
This value represents a feasiable launch altitude, and not an optimum/tactical launch altitude. Minimun launch altitudes should also be added, since old sub-munitions could not be dropped from very low altitudes due to malfuction after the impact at high velocity (did not have time slow down).
If you are interested, I can crunch the numbers in a table for all cluster weapons in the DB.
What needs to be done:
- Correct the DB.

Note: This burst altitude disregads the different burst methods (radar, altimer pressure or clock) to simplify and stay within the scope of CMO (!=simulator).

d. Burst Footprint
A new field with nominal burst footprint is added to the DB. Oval footprint sizes can be used as a good approximation here. Some deviations of this footprint. Older CBUs, like the CBU-58 has been reported to show a footprint which is more a donut (see fotos below of the Yom Kippur war). More modern systems, which have cluster bomblets with sensors, show a more homogeneous footprint.
As an approximation, length can be modelled as 1.5 times the width. (see "Observations on Cluster Strike Patterns in Laos" by Roly Evans in Volume 19, Issue 2 The Journal of ERW and Mine Action Article 14)
If you are interested I can crunch the numbers of all weapons.

What needs to be done:
- Add new field to the DB for cluster weapons, a nominal burst footprint.
- Add values to the DB.
- Write code to simulate the weapon footprint over the tgt area. 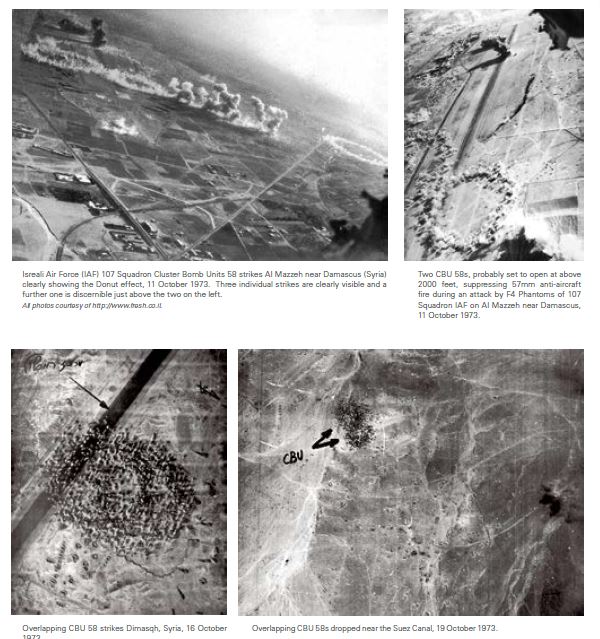