I decided to fire up Northern Inferno once again in CMO (had completed this before in CMANO) just to see the evolution of certain game mechanics and although the sonar/sound propagation model seems to be more realistic as it is now much harder to detect enemy submarines, there is something odd about how SOSUS works and how the uncertainty areas are calculated for subsurface contacts.

In the attached save file the calculated uncertainty areas for several submarines are quite wide, spanning across several hundred nautical miles, which makes the formulation of a suitable strategy to localize these contacts nearly impossible. In addition, some of these areas appear to be either entirely over land or covered in large by land mass (e.g. PL-611 Zulu IV over Greenland).

In certain instances, SOSUS was able to define the position of a sub with a relatively low uncertainty (ASW PZ1 for K-387) but a few moments later the uncertainty massively increases with the estimated location of the sub contact teleporting several hundred nm away (see the current, recalculated uncertainty area for K-387).

This behavior has some serious implications on ASW patrol missions. Aircraft trying to prosecute a contact will instantly re-direct themselves to the boundaries of the new uncertainty area (which might be, as described above, distinct from the original location), effectively defeating the purpose of setting up ASW patrol missions as user input/micromanagement is required to override aircraft behavior (see for example Nimrod MR.1 assigned to ASW PZ1).

Not sure if this is related to the original post but SOSUS was eventually able to get a fairly good fix on K-387. The sub is (reportedly) doing 5kts at a depth of 131ft but none of my active sensors (active buoys or dipping sonar) will pick it up. In all cases the predicted location of the sub is well within sensor range.

Assuming the active sensors are working ok and there’s nothing wrong with the acoustic signature of this specific sub class, it looks like SOSUS is unable to reliably determine the general location of a sub.

The SOSUS system can only detect the subs at a range of about 50 to 60 miles, but displays uncertainty zones as if they were hundreds of miles away.

Unless the player has run tests to understand how the SOSUS actually performs, this can seriously mislead them about the position of the subs, and the automated AI has no chance to recognize the situation. Units on ASW patrol missions can be lead well out of position as a result.

Detection ranges have significantly increased, however there can still be a large amount of variation in the displayed position of the sub. 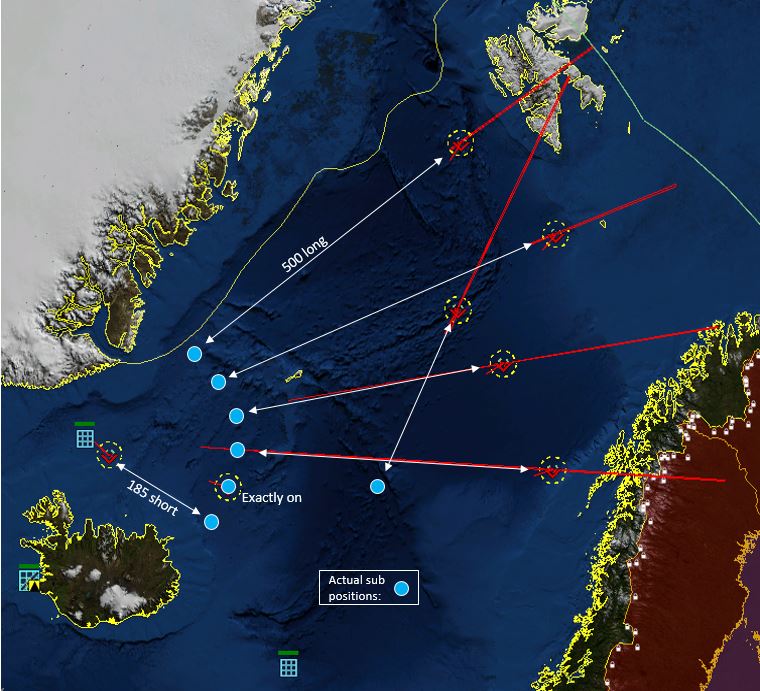 SOSUStest..tyareas.zip
(111.49 KiB) Not downloaded yet