currently in-game, airborne targets can be detected via IRST/ATFLIR but without radar, a weapon cannot be directed at them. IRL, many systems exist that claim to provide fire control for weapons without radar. not just IR missiles, but ARH missiles as well.

just a few examples of IRST systems that can or are implied to be capable of directing weapons when radar is not desired tactically or not functioning correctly due to jamming. I would imagine that current Russian, European and Chinese systems are likewise as capable.
Top

Is this really a tech issue or should it be in the main forum as a question. Will get more exposure there.

Also, a quick search on IRST brought up some useful info...

You are like puss filled boil on nice of ass of bikini model. You are nasty to everybody but then try to sweeten things up with a nice post somewhere else. That's nice but you're still a boil on a beautiful thing! - BDukes
Top

Ha...just saw you did post in the main forum. Oh well.
You are like puss filled boil on nice of ass of bikini model. You are nasty to everybody but then try to sweeten things up with a nice post somewhere else. That's nice but you're still a boil on a beautiful thing! - BDukes
Top

I moved it to tech support deliberately, because it could potentially be a hitherto design flaw, to be addressed. Need to research this first.
Facebook
Twitter

Main advantage and a design element of many Soviet IRST on the likes of the MiG-29 etc was to allow entirely passive engagement with the R-73. Don't think it worked on SARH types.
I will dig more and provide links but it is well documented.
Thanks
K
Top

We discussed this yesterday with some SMEs.

Apparently this is a fairly recent capability, first introduced by the Rafale F2 standard in 2005 with the service entry of the OSF EO sensor.

In order to have the ability, you need a high-resolution passive imaging sensor (EO or IR), plus advanced image-processing algorithms that compare the image with known stored reference images in order to determine its range and orientation (similar to TLAM-C's DSMAC or the aborted JDAM DAMASK system). From this information, and using successive image snapshots (and also by performing TMA on the target bearing) the overall kinematic properties of the contact can be determined with sufficient precision to generate fire control-grade tracking.

Given this information, the most expedient way to implement this would be to inherently enable this ability for all EO & IR sensors which have an "Early 2000s or later" tech generation, like the early OSF. However, this solution would probably also grant this ability to systems that, although very modern in other ways, may not have this capability incorporated. For this reason, it seems likely that we will need to add a dedicated sensor flag in the DB to explicitly enable this on a per-sensor basis.

Here is an example list of candidates based on their tech generation level alone:

Which of these systems (or which other which is not in this list) are likely to incorporate this ability? The more sources, the better.
Facebook
Twitter

Pardon my ignorance on this, but...

The entire system seems like a monumental software task for the weapon designers.

edit: And the database of images must have to be massive. I would imagine it would also be another task in mission prep to make sure all the appropriate images are loaded. That woul seem like its going to add some time to turnarounds on mission prep.
You are like puss filled boil on nice of ass of bikini model. You are nasty to everybody but then try to sweeten things up with a nice post somewhere else. That's nice but you're still a boil on a beautiful thing! - BDukes
Top

How do you want to use a system that can not detect range, wich is an essential part of fire control? You can aim at temperature difference,so to the exhaust of an engine. But nothing is as easy to distract as an IR sensor...
Warrant Officer Weapon Electronics(Retired.)
Top

I think thats the point of determining the kinematic properties from the imaging and the database of potential targets. One of those properties would be range. I am very skeptical that any airforce but the absolutely most sophisticated ones can support this capability.
You are like puss filled boil on nice of ass of bikini model. You are nasty to everybody but then try to sweeten things up with a nice post somewhere else. That's nice but you're still a boil on a beautiful thing! - BDukes
Top

Many of the current Gen systems have integrated laser range finding. There was also mention that multiple datalinked systems could get a range using bearing triangulation.
Top

But doesn't a laser emit detectable radiation? Even in tanks, defense systems against lasers give an immediate warning as well as direction. That would seem to defeat at least part of the reason for using IRST systems.
You are like puss filled boil on nice of ass of bikini model. You are nasty to everybody but then try to sweeten things up with a nice post somewhere else. That's nice but you're still a boil on a beautiful thing! - BDukes
Top

Yes a laser is an emission, but if it means being able to shoot a weapon at your target or not you may elect to laze and fire. Certainly your tactical scenario would dictate what you do, but I think you’d certainly want the option.
Top

My point is if you are going to emit, emit radar. You'll get a better picture of the engagement for a short burst.
You are like puss filled boil on nice of ass of bikini model. You are nasty to everybody but then try to sweeten things up with a nice post somewhere else. That's nice but you're still a boil on a beautiful thing! - BDukes
Top

There are situations where radar isn’t viable. Versus LO aircraft or versus targets that are jamming. Rather than try to get into a range where you can reliably radar detect, you’d want another option. It seems that in most cases, IR detection isn’t your preferred primary method but it makes sense to have another method available.
Top

Not an expert in this field, but Submariner has to face the same problem. Using Passive sensor to calculate the target's range

Sir? Do you want to order a Kung Pao Chicken or a Kung Fu Chicken?

And especially this image: 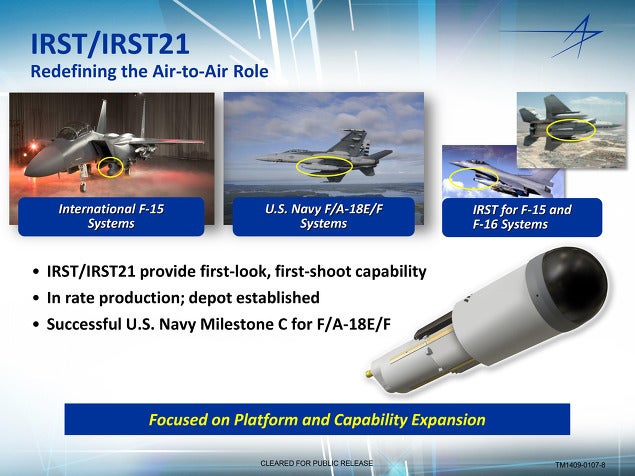 
It also provides targeting information to enable the pilot to engage threats using the IRST alone, or in combination with other sensors

Received a clarification on Rafale/OSF:

Baseline [Rafale] F2 was only able to guide IR MICA using the OSF. The ability to use the MICA EM in a similar fashion was pushed back to the F3 standard as a cost-saving measure.


In Command terms, since we already support "silent" IR-missile engagements, it means that a fire control-grade variant of the OSF (to support silent radar-missile shots) should be added to F3 and later aircraft variants.
Facebook
Twitter

I see the discussion above about weapon employment from the IR sensor alone.
But what I experience is that it does not matter if you have a Legion or Talon HATE pod under your (in this case) F-15C. Or even a AN/AAN-33 Sniper pod.

I put F-15s with several pods against a head on MiG-29s and it is not detected until within 10Nm by the eyball of the pilot. Neither of the sensors (Sniper, Talon HATE or Legion) detected anything.
Are the effects of these sensors now put all on hold?

Searched for the quality of the Sniper pod and found that it is reasonable to ID an aircraft at 11Nm let alone detect one much earlier in clear sky..
Evidence: https://www.youtube.com/watch?v=Yi9d8bstWsE

Quote:
A fighter equipped with the IRST carrying Legion Pod and an AIM-9X can hunt and kill targets, even just beyond visual range, in a largely electromagnetically silent state. It can do this while also leveraging the maximum efficiency of the AIM-9X Block II. The targeted aircraft wouldn't be alerted as to the incoming missile presence even during its terminal stage of flight because the AIM-9X uses an imaging infrared sensor (IIR), which is also passive. As such, IRST and AIM-9X together are one heck of a 'hunter-killer' team.
https://www.thedrive.com/the-war-zone/34897/f-15-uses-new-infrared-search-and-track-pod-to-shoot-down-target-with-aim-9x-sidewinder