Thanks Mike for this labor of love. I am going to save it for my first multi-player game, probably on Steam, with an agreeable opponent.

I assume I can paste in your counter mod, and if my opponent does not that is okay?

Anway, I may wait for the next patch on Steam first. We'll see.

You can use any counter mod you like. Your opponent can even use a different one from you.

Thanks, I keep SE synched with vanilla. Don't worry.

Hi my game seems can't show the mod, and I am pretty sure I copyed the correct files into correct directory, any idea?

Soooooo sorry, i did copied it in wrong directory.[:(]
Victory at all costs.
Top

Thanks for this great Scorched Earth mod PanzerMike, and the many units one. Newb to the game (not gaming) and really like it a lot and the map you made with this mod is fantastic.
JRR
Top

You are welcome. I will release another update when patch 1.07 is released. Mainly small bugs identified in vanilla will be fixed in 1.07 and those fixes will also be done in SE by me.
Top

Hi - I think there is an error in the Mod with the beach hex 151,81 north of Bergen, even in clear weather this cannot be invaded, but can be invaded in the vanilla game, even with your Panzer Map Mod. To test something, in the first turn, I declared war on Norway, then I loaded up the German division in Bremerhaven (152,64) and moved to hex 151,81, I then try to invade, but no hexes are shown in red as possible to invade in, even though I have sufficient landing craft. In the vanilla game. hex 151,81 shows in red and you can invade it. 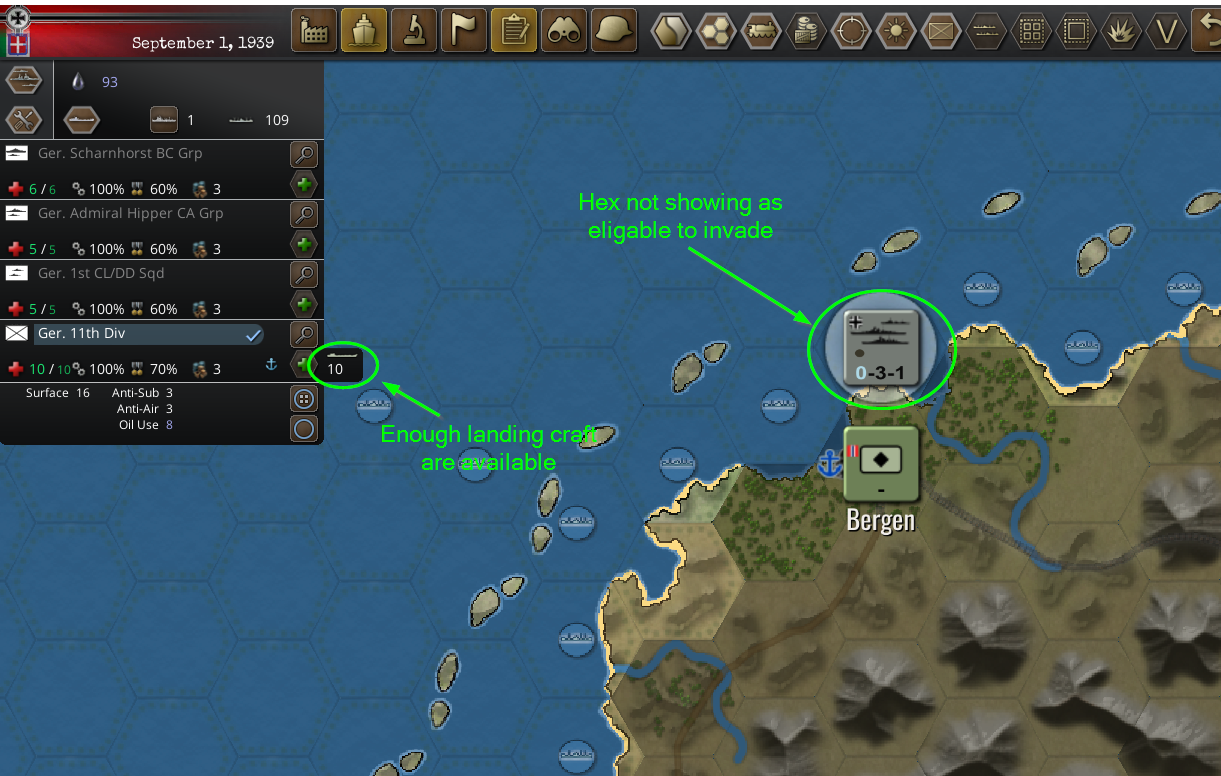 Hmmm, I will check that out. Thanks.
Top

I've tested this multiple times with the same result, so something is up. Obviously if it's just this one hex, it's not a game-breaker, but maybe some other hexes that you ought to be able to invade have this issue too?
Top

I will have a look at this tomorrow, together with the myriad of changes to the vanilla 1939 scenario which have to be ported over to Scorched Earth.
Top

Great, looking forward to the next update!
Top

Found it, will be fixed in the next update,
Top

Alvaro is aiming for a an official 1.07 patch on the short term (perhaps even next week). SE 1.2 will be released as well, fully synched with vanilla changes.
Top

Something I found that was not mentioned in the change log. France no longer surrenders when all its mainland pop/resource centers are taken. Probably either needs to be addressed in the scewnario conditions (which state that France will surrender if those are taken) or have the new pop centers removed (Damascus/Algiers).
Top

Not behind my PC right now, but when was this changed in vanilla?
Top

There are weaknesses in the German army.
Northwestern Poland Bydgoszcz.
Pomorze Army was able to capture Berlin on 3 turn.

Thanks for the work creating this mod, it has some features I like. However I am having a problem with rail tiles appearing on the map. Perhaps in a dozen or more places there is a rail tile(s) missing, rail leading up to a hex on two or more sides. When I click on rail transport it shows I can move units by rail through these hexes though I can't see the rail tile.

Any idea what may be wrong?
Top

A short heads up, I have not synched this mod with the newest v7 patch. The game is still very much in flux and keeping the mod synched is a lot of work. So it will take a while before I will get around to it.
Top
Post Reply
44 posts