The Beta to test the New Stacking limit in Armored Brigade has been a success. Thanks to all the testers who have helped with their feedback and suggestions, this important feature has been implemented for everyone. 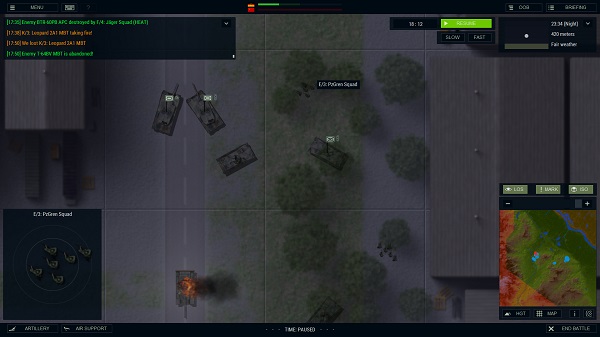 Armored Brigade and its DLCs will be released on Steam on October 31st.
Top

This update has a lot more fixes and improvements than the 1.036 Beta patch, including changes in the spotting system. It should work even if the Beta patch was applied, so there's no need to uninstall the game. Here's the combined 1.036+1.042 changelog:

NOTE: Savegames from older builds are not compatible.

Fix: Some units and aircraft started the battle with their maximum speed reduced even 50%. This could slow down formation movement.
Fix: The application crashed if the Battle Generator started a battle where the defending player side had bought obstacles.
Fix: The application crashed if there was an empty folder in the database directory.
Fix: The application crashed if the ISO view was run when the game window was minimized.
Fix: The Mission Editor zone painting system saved the isolated impassable 'islands' as no-go zones.
Fix: The 'Force B playable' text label without the checkbox was visible in the Battle Generator.
Fix: MILAN IFV and Marder IFV MILAN had incorrect 'ready ammunition' and 'time to fire' values.
Fix: FK 20mm AA cannons had wrong ammo (new shells for them).
Fix: The Vigilant infantry weapon had turret angle 5°.
Fix: British Jaguar GR.1 SNEB 68mm rocket muzzle.
Fix: 2x30mm ADEN tracer delay.
[campaigns] Set the 'Beyond Water' and 'Over the Hills' water type to 'Varied'.
[database] 30mm ADEN and DEFA have updated (increased) ammo consumption and number of tracers in range of other cannons with similar RoF.
[database] Deleted the excess G.91 flight.
[engine] Allow up to three friendly units to enter a map cell simultaneously.
[engine] Improve pathfinding.
[engine] Add the 'Autumn (early)' environment.
[engine] When a ground unit is firing and the enemy is trying to spot it, limit the unit's minimum size factor to the size of a 10-man infantry squad. This makes the smallest infantry teams considerably easier to spot when they fire.
[engine] Increase the gun unit (AT-guns etc.) size. This makes them easier to detect and hit.
[engine] Decrease the spotting penalty of retreating units. The units are now much less blind when retreating.
[engine] Make the standard and artillery mines harder to detect.
[engine] Increase the cost of standard minefields.
[engine] The auto-purchaser tries to buy an equal amount of minefield, AT, and wire obstacles.
[engine] Do not allow placing obstacles on rubble terrain.
[engine] Only anti-air ground units always prefer air targets.
[engine] Implement the new brush types for zone painting in the Battle Generator and the Mission Editor.
[engine] Set the default water type to 'Varied'.
[graphics] Improve the rubble graphics.
[graphics] Add new textures for the 'barren' environment plowed fields and dirt roads.
[graphics] Improve and add various new textures, zoomed-out map patterns, and pattern colors.
[graphics] ISO View: Render tree graphics in the roads/streams with trees.
[graphics] Update the main menu background texture.
[scenarios] Update scenarios: 'Walk on Water', 'Winter Desolation', 'Twin Valleys', 'East of Fulda', and 'Special Delivery'.
[ui] Implement the formation/unit 'locked' icons.
[ui] Improve the TRP graphics. Use the combined circle graphics for the TRPs, also when setting up fire missions. Use a larger selection radius for TRPs.
[ui] Render the pre-battle recon phase estimated enemy locations by using combined circle graphics.
[ui] Adjust the target line opacity.
[ui] Optimize circle rendering and adjust the dashed vs. solid line distance.
[ui] Hide the on-map mortar and artillery target text labels when zoomed-out.
[ui] Use the blue arrow to show the campaign path direction when setting it.

Cool, I thought the infantry spotting when firing tweak was going to be in the next beta..

Thank you for your works. Great to see the game is improving.
Top

Hmm, the download links are not working for me. Both the one in this thread and the one in the member downloads. Anyone else having that problem?
My Combat Campaigns Blog
Top

Hmm, the download links are not working for me. Both the one in this thread and the one in the member downloads. Anyone else having that problem?


The above link works for me. Try clearing your browser cookies for the site.

It worked, thanks. Just odd, never had that happen before and I have bunches of Matrix games.
My Combat Campaigns Blog
Top

The download link isnt working for me either
Top

Yeah. I can't download the update either. Is there an simple FTP like I can use to download it with Filezilla instead of goin thru the browser?
Top

Yeah. I can't download the update either. Is there an simple FTP like I can use to download it with Filezilla instead of goin thru the browser?


Did you try to clear the browser cookies for the site?

Yep. But that doesn't help. I keep getting "Page can't be reached" errors. I tried on PC with Microsoft Edge, Internet Explorer, on Mac with Safari and Chrome and it is the same everywhere I can't get the fuckin' update.
Top

If you google for 'Page can't be reached' you get different suggestions for solving this.

This is ridiculous it should be your responsibility to solve the issue not the customers. You still haven't replied to my helpdesk ticket on matrix games
Top

Actually, this issue is on Matrix part and we bear no responsibility. They don't work on weekends.

Other that clearing cookies (which solves the issue in 90% of the cases), I can suggest you try to restart DNS client.

2.Scroll down till you find “DNS Client” (Press D to easily find it, sometimes it is also listed as Client DNS).

I tried that but for some reason "Restart" and the other choices in DNS Client are all greyed out.
Top

That's the thing about Matrix/Slitherine...their customer service is terrible, and their websites are still in the mid-90s as far as design, usability, and technology is concerned. And then they still have the nerve to charge prices that are about 100% too high for their games.

And I have no problems downloading stuff from any other site on the entire internet, except for this stupid company's websites. I am glad their web engineers are not designing their games because if they were their games would be shit as well.
Top

I've never been able to get anything to patch/update using the auto-updater that accesses the FTP site from inside any of their games. In checking the direct links they provide in the forums, pretty much any that use that http://ftp.matrixgames.com type link fail to connect (the links that fail in the MyPage section use the same URL).

If you guys having issues getting the patch can give me a few hours to get off work, I think I can get the file to you. I'll PM when I have more info.
My Combat Campaigns Blog
Top

That'd be great. Thanks!
Top

That'd be great. Thanks!

I was able to message a few others (no reply back from them yet though) but not seeing a PM button for you. Do you have PM's turned off?
My Combat Campaigns Blog
Top
Post Reply
19 posts • Page 1 of 1