For some reason the Russian nato counters don't change in the game, but when I check the bitmaps folder they are modified. I've tried re-installing with same result. Any ideas what might be wrong?

Okay, I've figured it out. For some reason, Major 4 which are the Russians, also have a folder in the Campaigns folder which has to be manually replaced with the new nato files.
Top

Had the same problem. Lastly it was with the Brits.

Oh, yes, and Iron, I think, unless changed by now, your mod has the old Europe mini-map. Should be replaced next update.
Top

The mini-map was changed long ago. You need to make sure all the files in the Campaigns folder are copied across. The mini-map is in the Interface sub-folder.

I love your MOD Ironx.

I am also using it in SC3 War in Europe but the forests do not appear correctly. I had to put back the original terrain icons and everything was perfect.

Yeah NATO symbols! I like them much better than figures. It must be old school from my Avalon Hill days. Excellent work IronX!
WW III 1946 Books
SC3 EAW WW Three 1946 Mod and Naval Mods
WarPlan and WarPlan Pac Alpha and Be
Top

Thanks! I just wasn't entirely happy with the Japanese SF figure so in the end went with the NATO symbol, which meant they all had to be changed. It also better reflects the size of the unit. I think the vehicles, ships, and aircraft icons still work and are what inspired me to make the mod in the first place.
Top

What all those "not implemented" hexes mean? Or did I screw up something installing the mod? 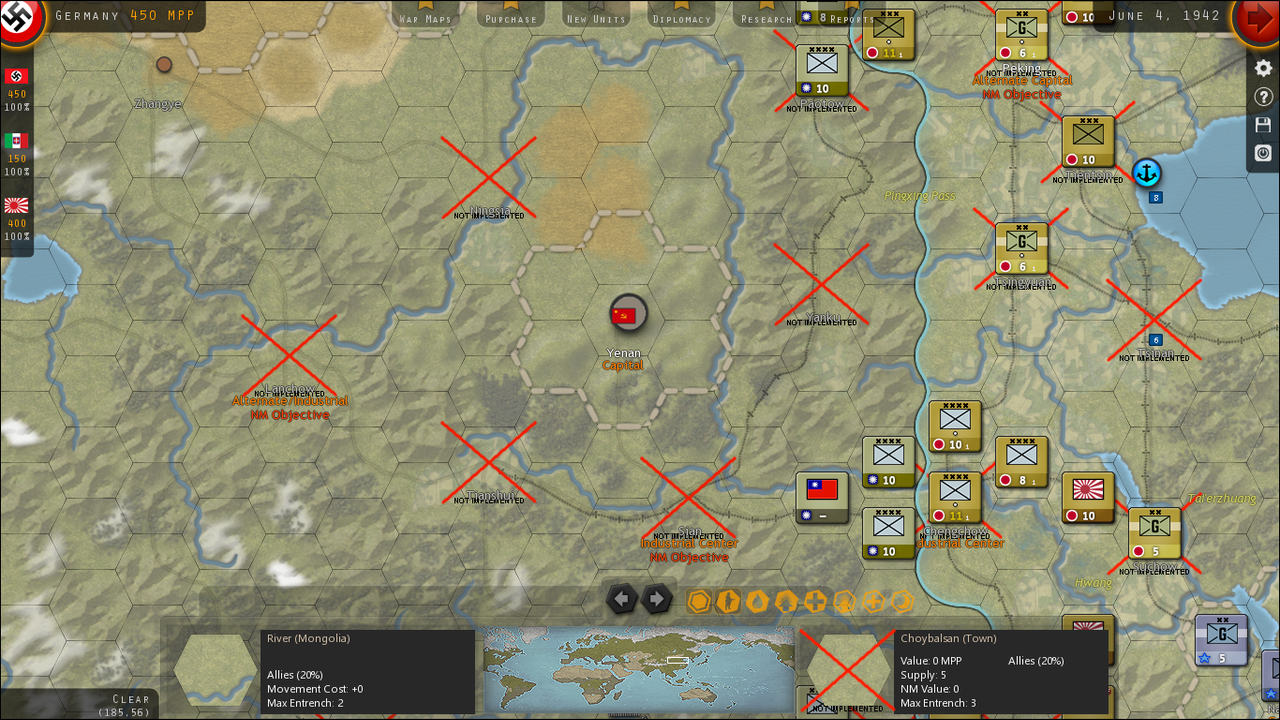 Lest we forget.
Top

Yes, I love the ship/plane and vehicles. If you don't mind, I'd like to mod the ship counters to better represent the task force concept and then use the rest for the naval mod. I'll get permission to use Sipres excellent work as well for the 3d option and of course Welk's map.
WW III 1946 Books
SC3 EAW WW Three 1946 Mod and Naval Mods
WarPlan and WarPlan Pac Alpha and Be
Top

Hi Ivanov - yes, you’re missing at least one file there. Try copying across the Bitmaps folder again as that’s where the missing files are located.
Top

Hi Ivanov - yes, you’re missing at least one file there. Try copying across the Bitmaps folder again as that’s where the missing files are located.


Thanks Iron. I'll try again.
Lest we forget.
Top

Great mod IronX. The mod actually swung me toward buying the game.

I didn’t start playing the game in earnest until I started to mod it. I just prefer the look of old-school board games, which was my introduction to the hobby many years ago.
Top

Myself also. I always want hexes on and a boardgame look. That's why I love your mod so much. I bought my first hex boardgame 45 years ago and like fishing or train spotting with your dad it seems to get into the blood

It becomes a part of you.

I installed this set and promptly found an error. The USN launched and deployed two battle cruisers (CC) in World War II, USS Alaska and USS Guam, both of which served with the U.S. Navy during the last year of the war.

I built a USN CC unit in the game I am currently playing, but this counter set yields only a USN CC counter with a large X through it, and it is labeled "Not Used."

Well, I use it, and I use it to represent two real ships that really fought with the USN in the Pacific and were awarded real battle stars.

Please update the counter set to include a USN counter for USN battle cruisers, per history. Thank you.
“It was a war of snap judgments and binary results—shoot or don’t, live or die.“

Also there is no counter for British light armor. Please add one.

“It was a war of snap judgments and binary results—shoot or don’t, live or die.“

Thanks. I'm adding these to the "to-do" list. If you find any others, please let me know. A new version of the mod will be released this weekend.
Top

I'm really tempted to use this mod, it looks excellent. The only thing that's holding me back is that artillery and anti-tank units don't have the NATO symbol at the top right as the cavalry units do. I know that it's named in the counter itself, but I think it would be better if the NATO symbol would be used instead. Would help with non-English speakers too. I'd argue you could do the same with the tanks as well, but they're well known as it is, especially with the target audience.
Top

Just got the game and have downloaded this excellent-looking mod (thanks IronX!). Just one dumb question: where can I find the "Welk map mod" that is also supposed to be downloaded?
thanks!
"The Navy has a moth-eaten tradition that the captain who loses his ship is disgraced. What do they have all those ships for, if not to hurl them at the enemy?" --Douglas MacArthur
Top

I have removed it as I’m about to release a new version of the mod that includes my new map. You can still find Welk’s map in the WiE mod forum.
Top

Ah, OK. I'll hold off for your update then.
thanks![8D]
"The Navy has a moth-eaten tradition that the captain who loses his ship is disgraced. What do they have all those ships for, if not to hurl them at the enemy?" --Douglas MacArthur
Top
Post Reply
249 posts