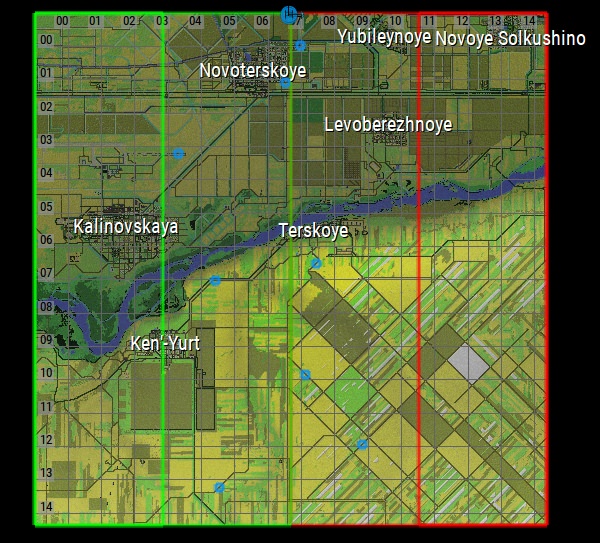 The demo currently includes a small (512x512 tiles, or 15x15km) piece from the top right corner of the map, along the banks of the river Terek.

Note: I really recommend playing smaller bits of the map than the whole thing - take a smaller piece, and stick to one side of the river rather than both. At the moment, there is only one usable crossing across the Terek, the road bridge on the far east side of the map - so if you try to play the full map, this will likely be very confusing for the AI.

Historically, this was not an area that saw much fighting!


I am working on a map of Chechnya (I feel like AB could do a really good job with some of the scenarios in this one, and it's also just a long-term research interest of mine). It is meant to represent the war during the 1990s, particularly during its civil war and Russian military incursion phases in 1994-1995.
Working with satellite data, 1980s Soviet military topo maps as sources - but also trying to get it to look and play as naturally as possible in-game. Thus the map is tilted 24 degrees, and I'll have to realign road layouts and street grids as necessary to make things look more manageable.

It's probably going to be a long-term project for me, but in the meantime, here's some previews of what I have so far (everything is very preliminary at the moment) [:)]

(and a big thanks to 22sec for his help with the height map!) 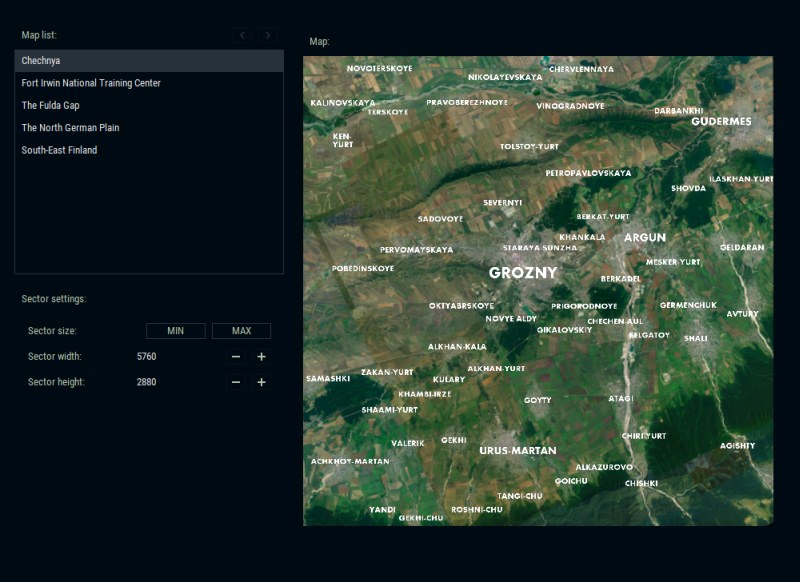 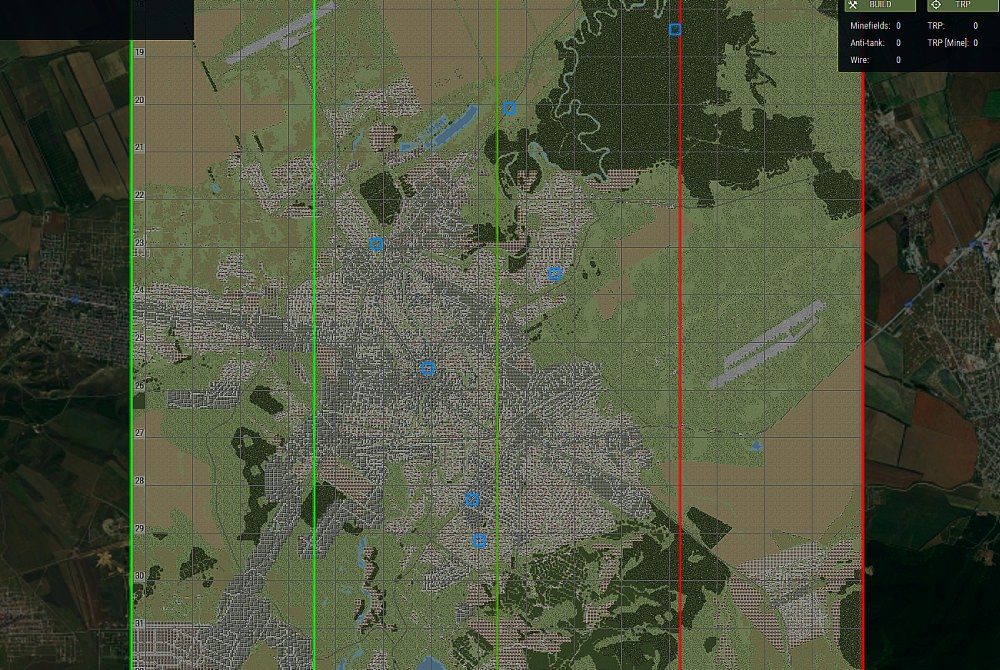 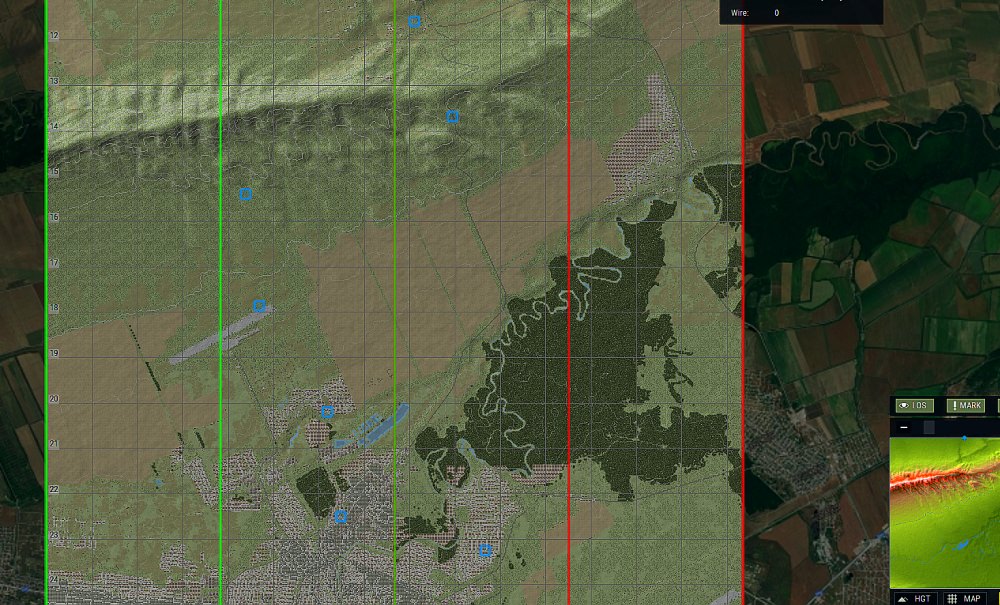 northern Grozny, with the height map implemented (again, thanks to 22sec!)

north side of Grozny, isometric view from the south

north side of Grozny, isometric view from the east (height slightly exaggerated) 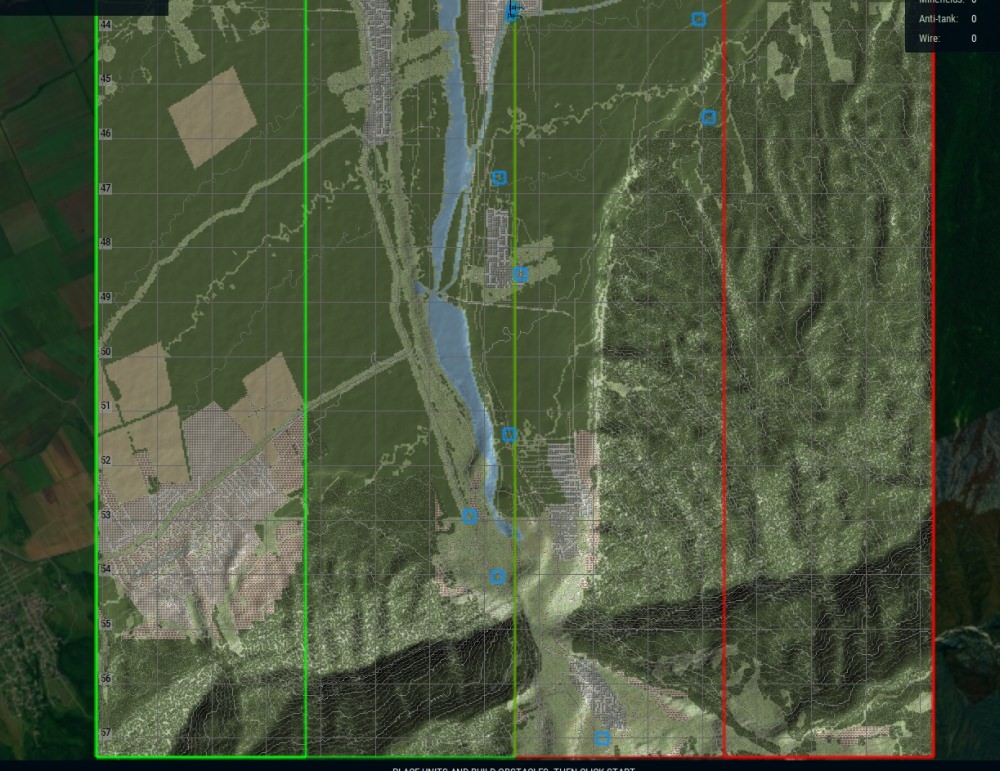 in the south of Chechnya's main valley, near Chiri Yurt - Caucasus mountains rising to the south (this is all processed map data, just testing elevation)

Kalinovskaya, in the northeast corner of the map, and the Terek river - the first area I've had a chance to work on by hand.
the airfield here housed most of the separatist Chechen aviation, which was bombed and destroyed on the ground on Dec 1st, 1994, prior to the start of the main Russian incursion. 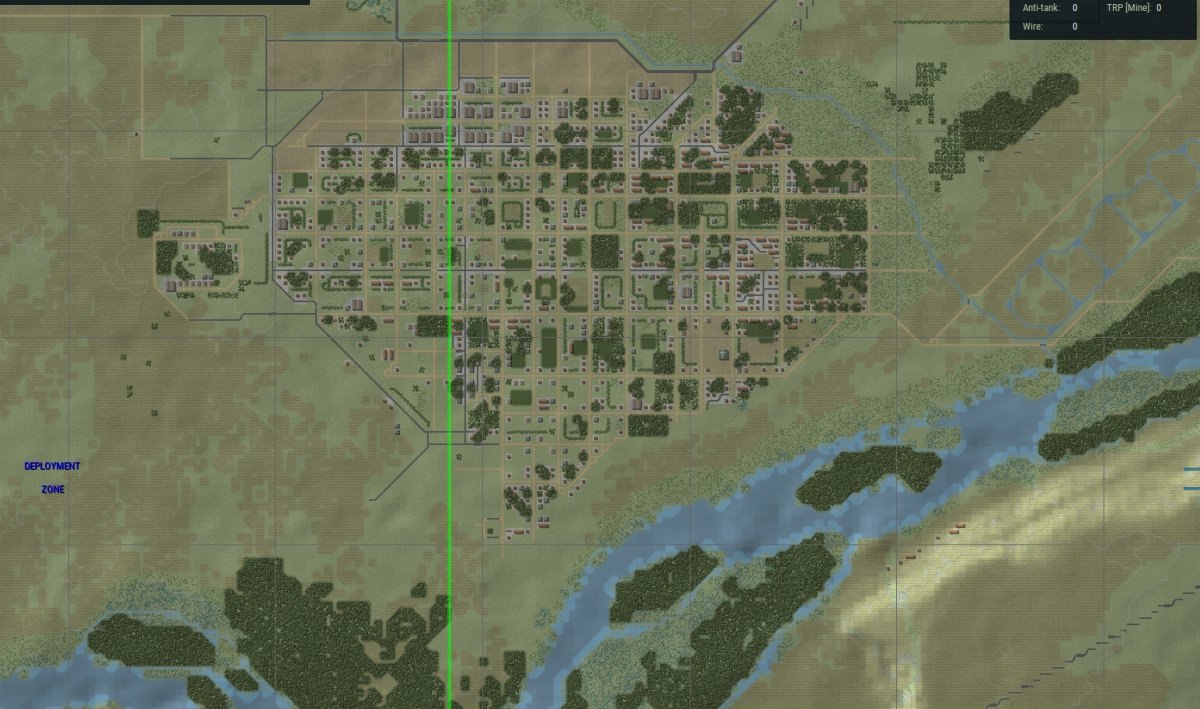 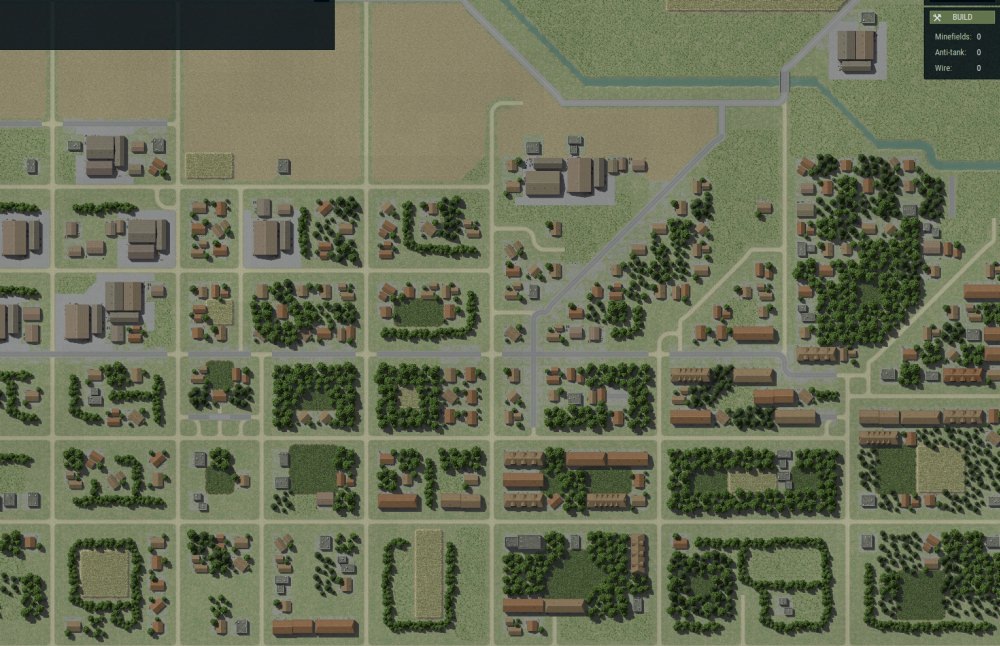 village details - this is pretty close to the final look of what I'd like to have on the rest of the map!

I'll update previews accordingly as I work on it - no promises yet on when I might have it ready for any sort of play, but we shall see [:)]
Top

Wow, great progress. BTW, how do you guys get the buildings trees, and roads to come out so well so relatively quickly?
,
Kevin
“The study of history lies at the foundation of all sound military conclusions and practice.”
&#8213; Alfred Thayer Mahan

Same question with Kevin. I can download SRTM data and set up 60km x 60km zone using QGIS, and I can export them. But I'm not sure how to 'draw' those using GIMP or Armored Brigade map editor, from QGIS raw data. I can draw / mark roads, forest, buildings, and etc... from QGIS, but I'm not sure if this game requires drawings/markings from QGIS.

Or is this something Global Mapper must be required? I can approach to ArcGIS using facility license of my workplace, but I'm using QGIS because it is free.

I’m not sure how well the game would like the cities as built up as they are in the above screenshots. The village would be fine, but I think the path findin would struggle with so many buildings.
Mapping Specialist
Top

Yeah, the city is admittedly something that only looks good from a distance right now - up close, it's pure nonsense in its current state [:)] 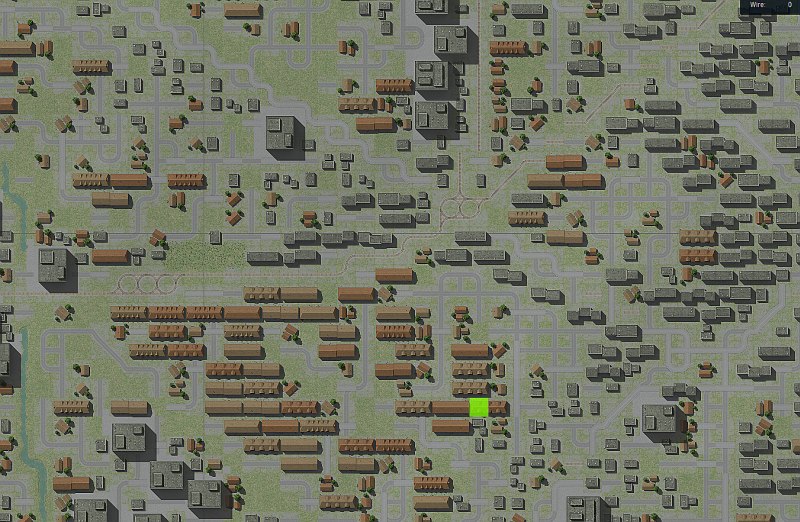 I mostly got the data in there through image processing tricks (with Gimp) - after I figured out the terrain palette, I rendered out several different types of maps and hammered on the different layers by selecting colours (usually by heavily compressing the colour spaces of the images I was using) and replacing those colours with the game's various features. The roads are far from perfect - again, the best I get is mostly guidelines that I can then draw over.

With city blocks, I have a feeling I'll have to make some pretty heavy compromises and reduce the number of actual streets to give pathfinding some breathing space. Luckily, the only major city I'm working with, Grozny, was known for broad streets and open spaces even before the war. So that should at least make my job a bit easier!

After a couple of days of tinkering, I would say that for best results, roads and buildings should be placed manually. Things like forests, fields, and water can actually be pulled from GIS data with minimal tweaking - but roads pretty much have to be re-drawn by hand.
Top

Could you please let us know the detailed work flow?
Top

Could you please let us know the detailed work flow?


I wish my workflow was neat and logical - I don't recommend following what I do in detail, and to be honest, I mostly just wing it [:)]

However, the trick is to find maps where features that you want are drawn with a distinct colour or shade. You can then select those features by colour, create a new layer, and fill/paint in your selection with a colour that corresponds to the AB map pallette. Like this (in Gimp, in my case): 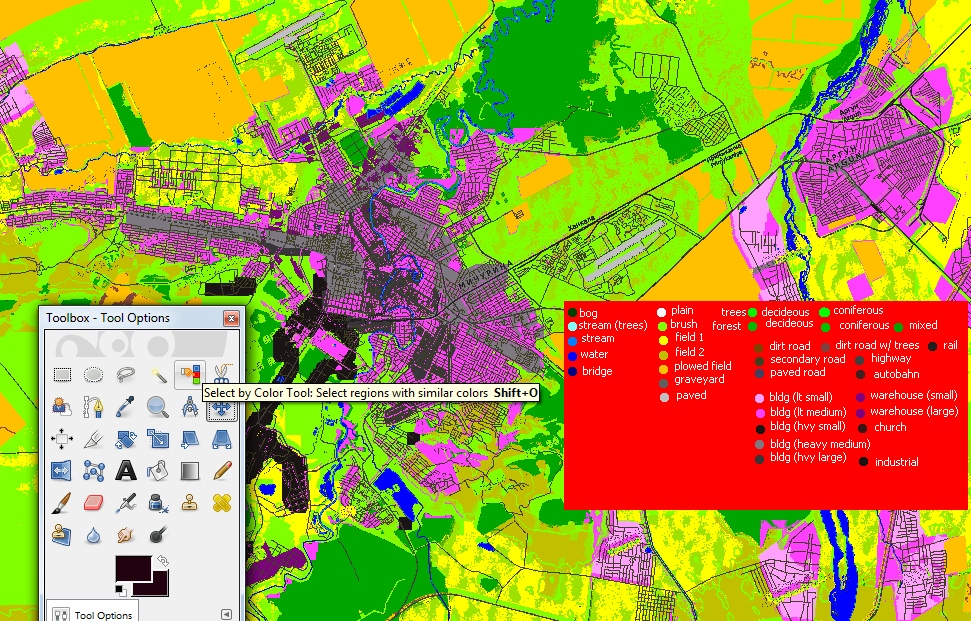 1) Find a map where the features you need are in a distinct colour or set of colours (e.g. roads are red, railroads are black, cities are grey, forest is green, etc.) Use a GIS software of your choice. Vector map sources or topographic maps work best - but you can use anything if you want, even satellite images. The trick is having a map that has features that you want in very distinctive colour or set of colours - because that way you can select that feature and work with it rather than everything that's on the map.
Make sure you have your chosen map correctly aligned with your base map/height map you will be working on.

2) Select that colour. There are a few ways of doing it - but a "select colour" or "select colour range" tool as above are one thing you can do.
These usually have a tweakable sensitivity, but you can also pre-process your map: e.g. reduce your source map's colour depth to force it to use a smaller, more distinctive set of colours (making it easier to select), sharpen the map, or blow up the contrast/saturation. Anything that helps zero in and select the one feature you're looking for.

3) Once you've selected that colour, create a new layer. Then pick a colour that AB's palette uses for terrain features, and fill your selection with that colour!
Or, you don't have to fill the whole selection, but can manually paint over it with a brush so that you only get parts that you want (rather than everything in the colour you selected).

4) Once you have what you need, repeat for any other map features. Create new layers for each. I recommend always keeping the layers you use for roads on top, then water just under them, then buildings/populated areas, then everything else.

Like I said, it's still not an instant map maker - especially with roads, you have to do a lot of work by hand afterwards to make everything actually line up - but it's handy having things in-game to use as guidelines!
Top

Just as an example of the amount of manual work this one has required me...

Before (with combined map data processed from various sources): 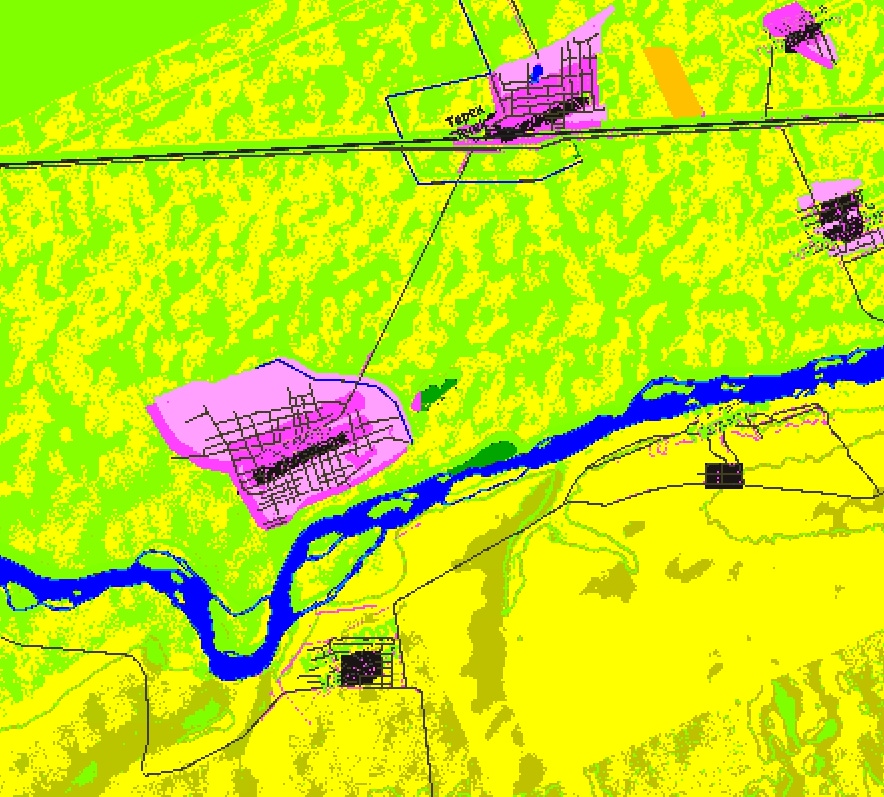 After (features realigned and details drawn by hand): 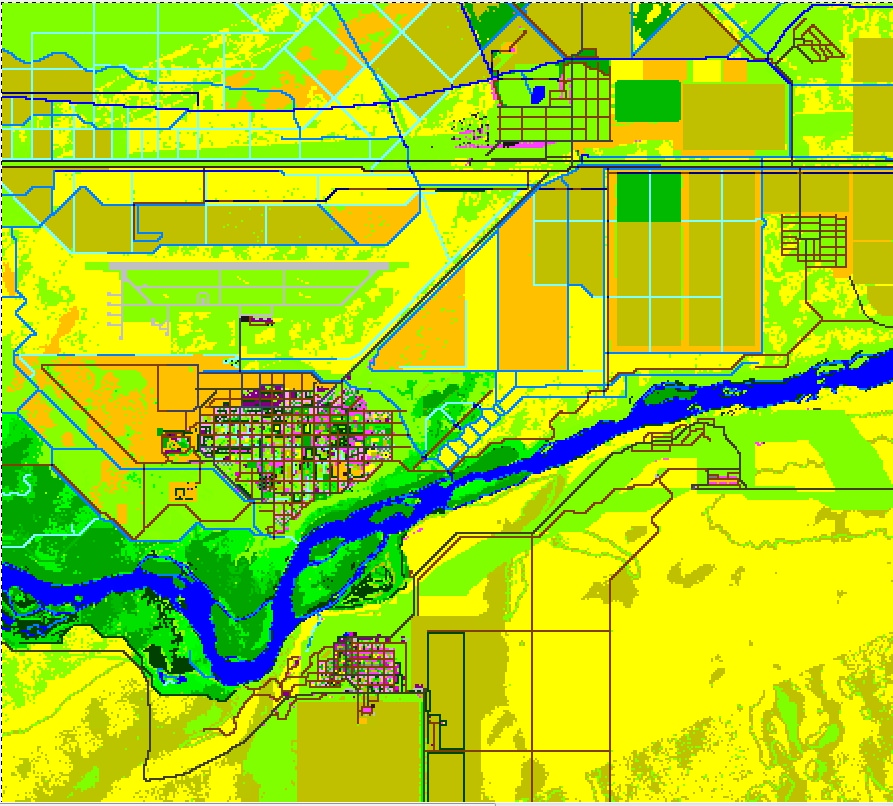 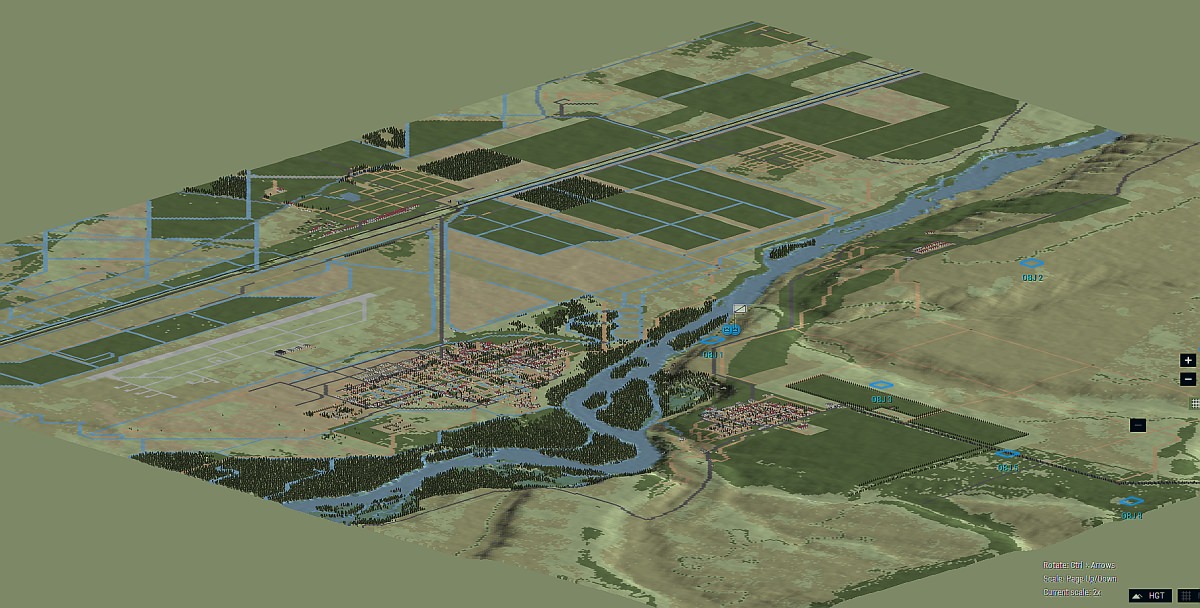 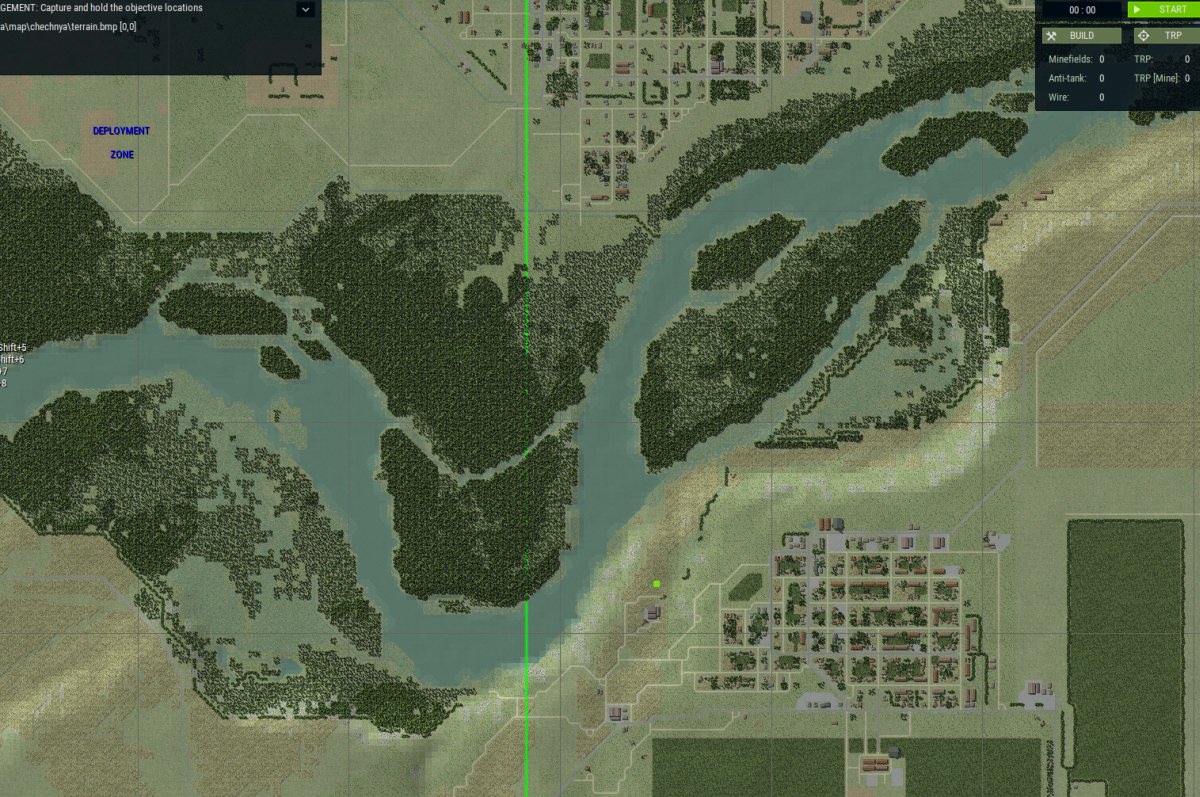 And just a quick satellite vs. game comparison: 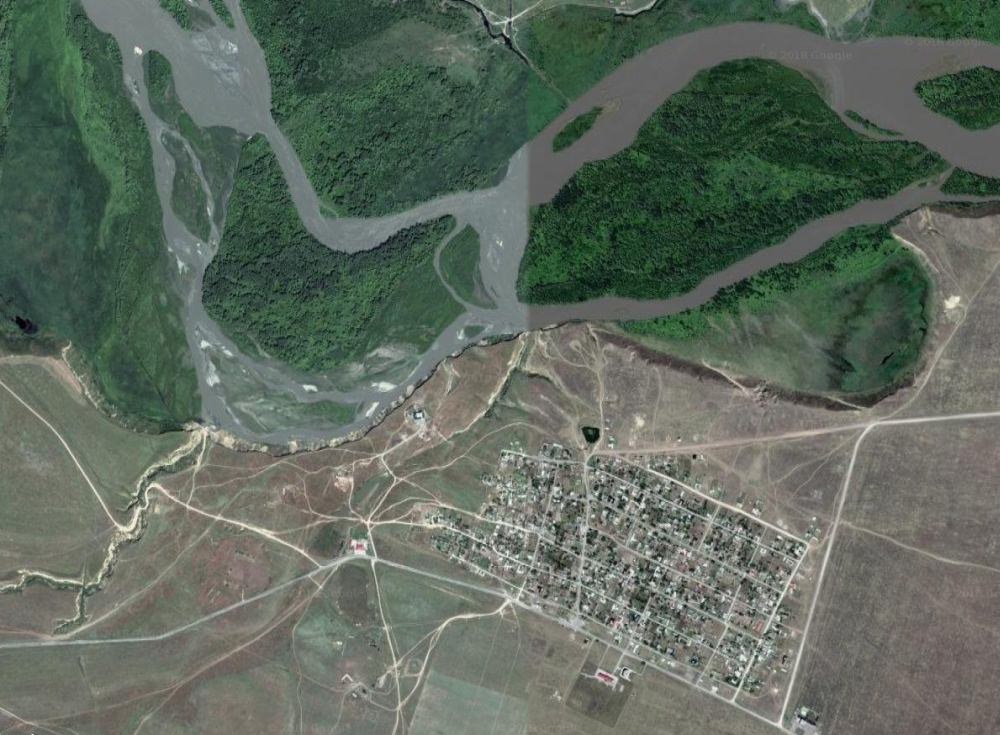 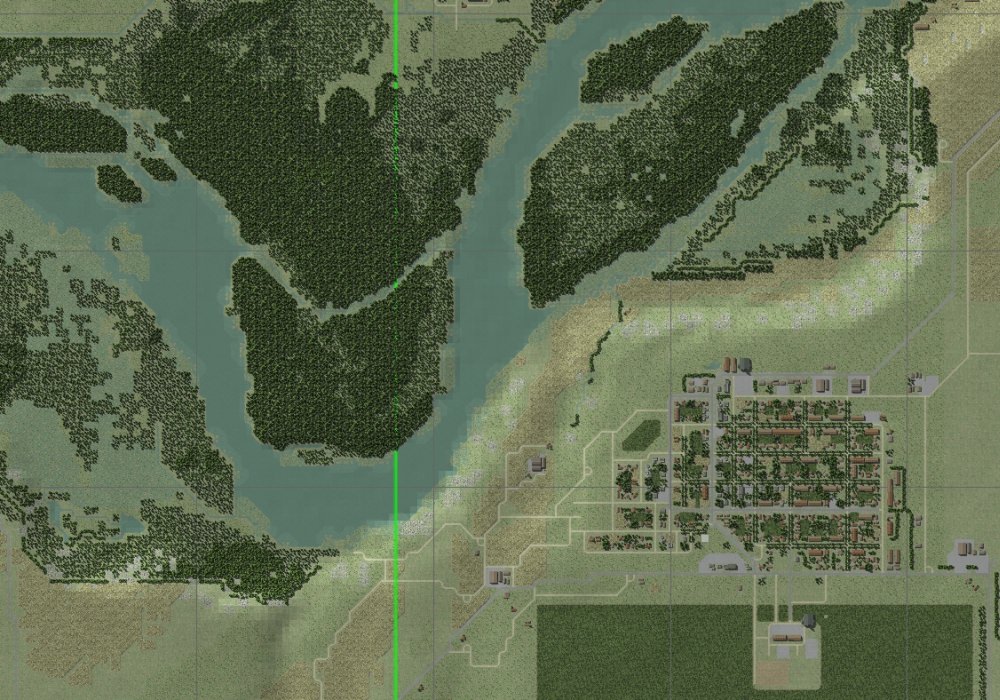 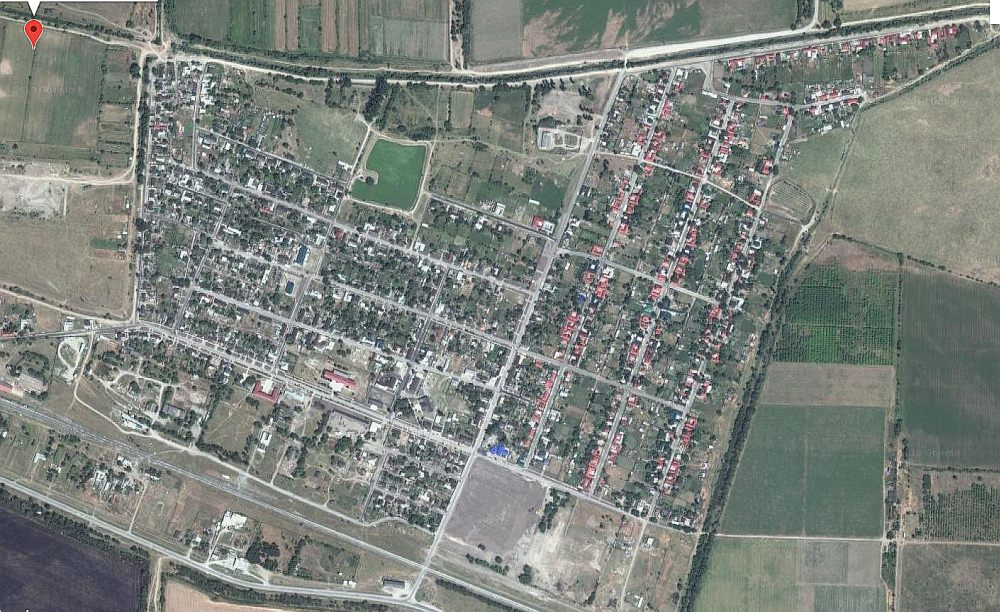 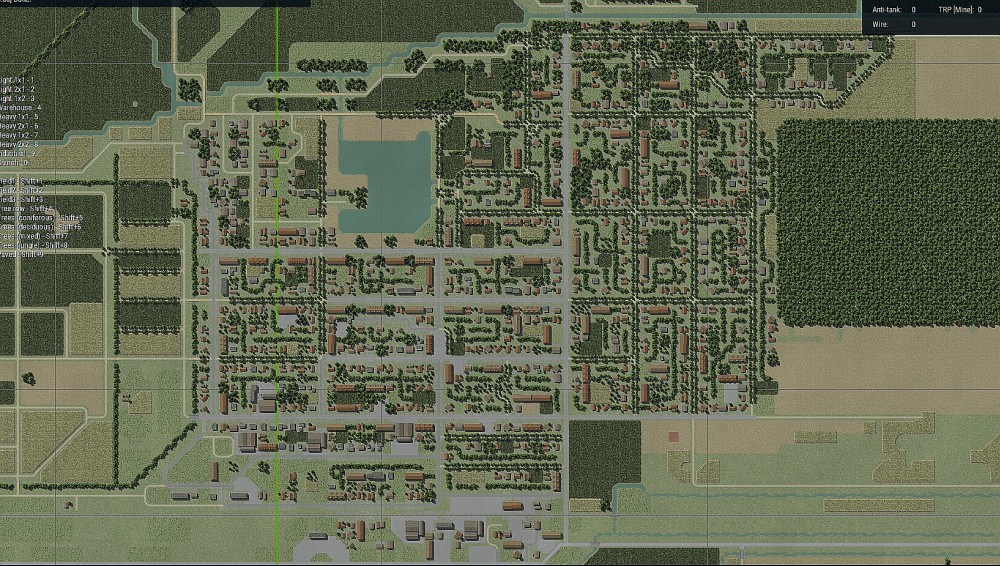 how you made preview map?
Top

Thank you CCIP. Now I understand the basic concept and flow of this work. So, the very basic process is
1) Export the map (with topology data) from GIS
2) Read with GIMP
3) Select the color
4) Change the color to the AB pallet's color (create new layer after select)
5) Repeat 3) and 4) until I finish color from AB pallet for different items of the map.
6) Realign and fix details using GIMP
7) Export the map to BMP, load from AB
8) Fix detail from AB or GIMP again
9) Repeat 6~8 until everything become clean.

I'm not sure how much QGIS could provide, but QGIS provide Bing road map or OCM street map so, let's see. I think it would be better to export to map rather than satellite image.

I will try to follow your track. Can I send you PM if I have more detailed questions?
Top

This is golden, thanks CCIP, I will also begin playing with this.


I'm not sure how much QGIS could provide, but QGIS provide Bing road map or OCM street map so, let's see. I think it would be better to export to map rather than satellite image.

I will try to follow your track. Can I send you PM if I have more detailed questions?


Sure thing! Please keep in mind I'm a bit of a self-taught hack when it comes to GIS and image processing, so any suggestions I may have should be taken with a grain of salt. There are probably way better way of doing things than anything I can come up with. I also don't currently have software I'd like (e.g. license for Global Mapper, Photoshop) so I'm swapping for programs I'm less familiar with. Actually, I pulled most of the data using the same GMap program I use for creating CMANO map overlays.

One thing I suggest is to always start by picking your area and creating a map base - you may not use it for anything other than reference, but it's important. In my case, I pulled a high-resolution satellite map and realigned it, so that any kind of map I work with (elevation, topo, terrain features etc.) can always be aligned to it. You can then get as creative as you need to be - there are a lot of good sources for online maps, which are not always properly tagged for GIS software, but you can always align them with your base map by hand.

One favourite source of mine, for example, is the University of Texas' Perry-Castañeda Library Map Collection: https://legacy.lib.utexas.edu/maps/

Lots of handy maps there, especially for historical reference!
Top

Been working on more details today - hoping that tomorrow, I can at least finish up the one 15x15km corner of the map I've mostly been working on. Might be at least a fun one to play around on, even on a small scale [:)]

Got map labels working as well! 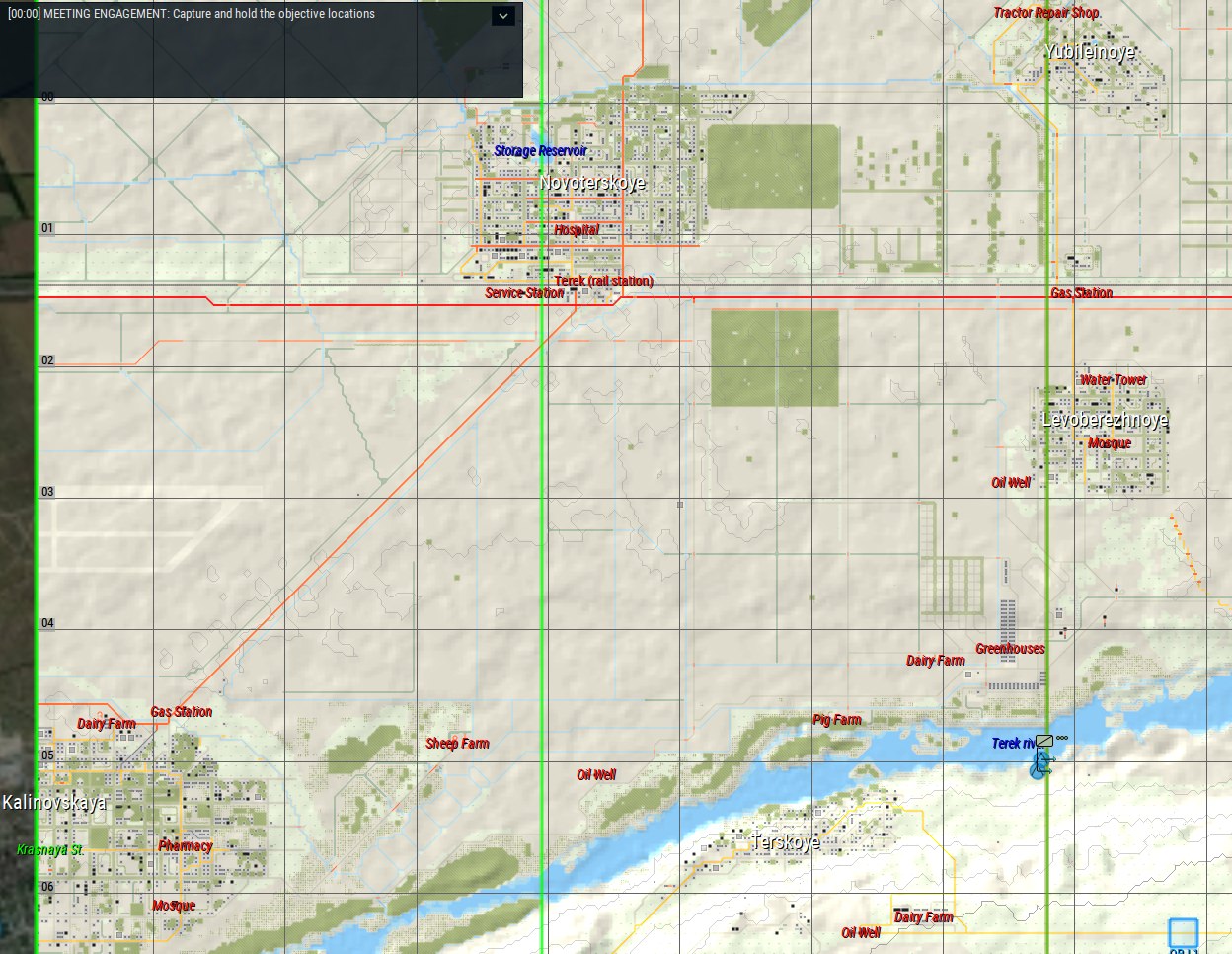 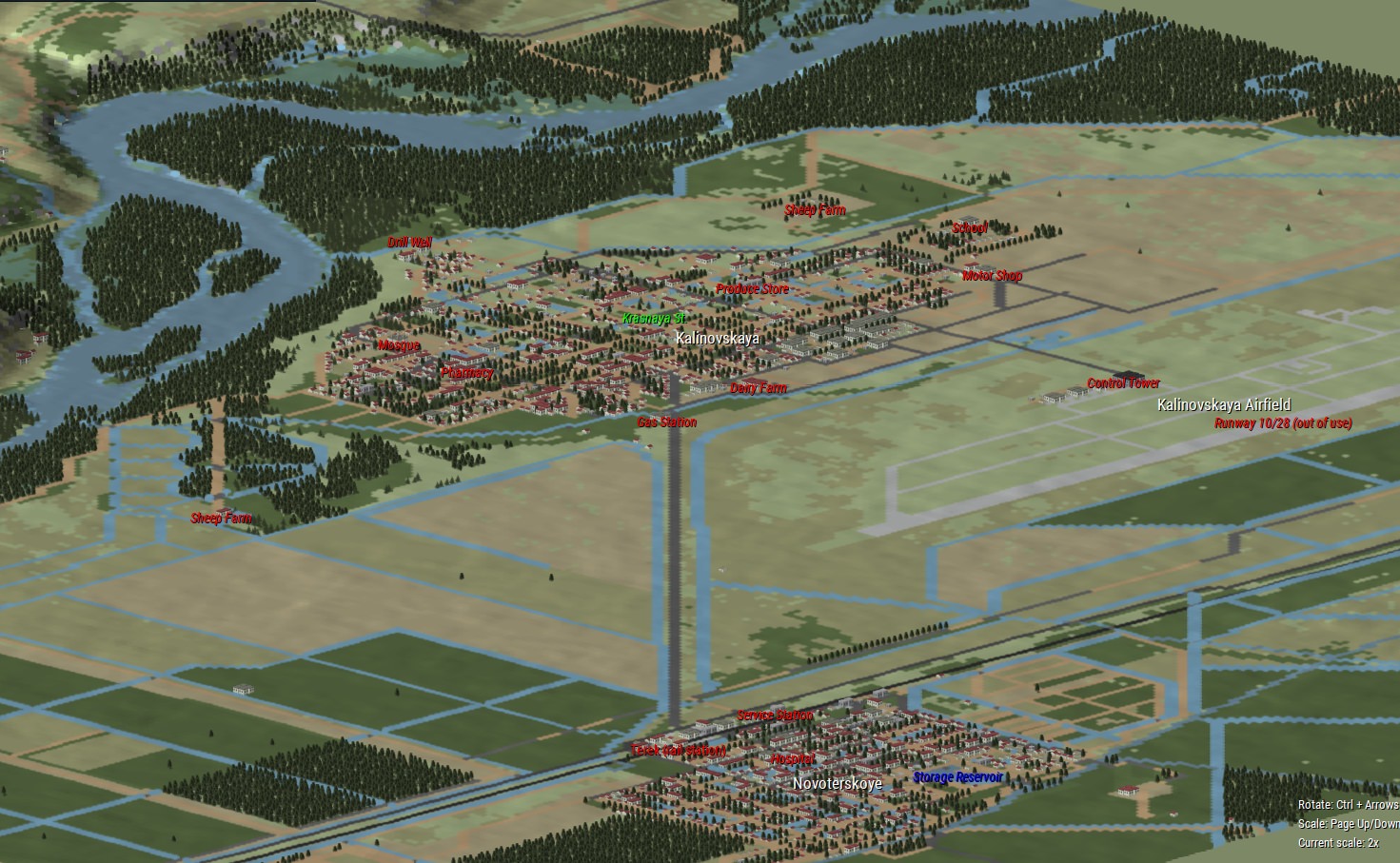 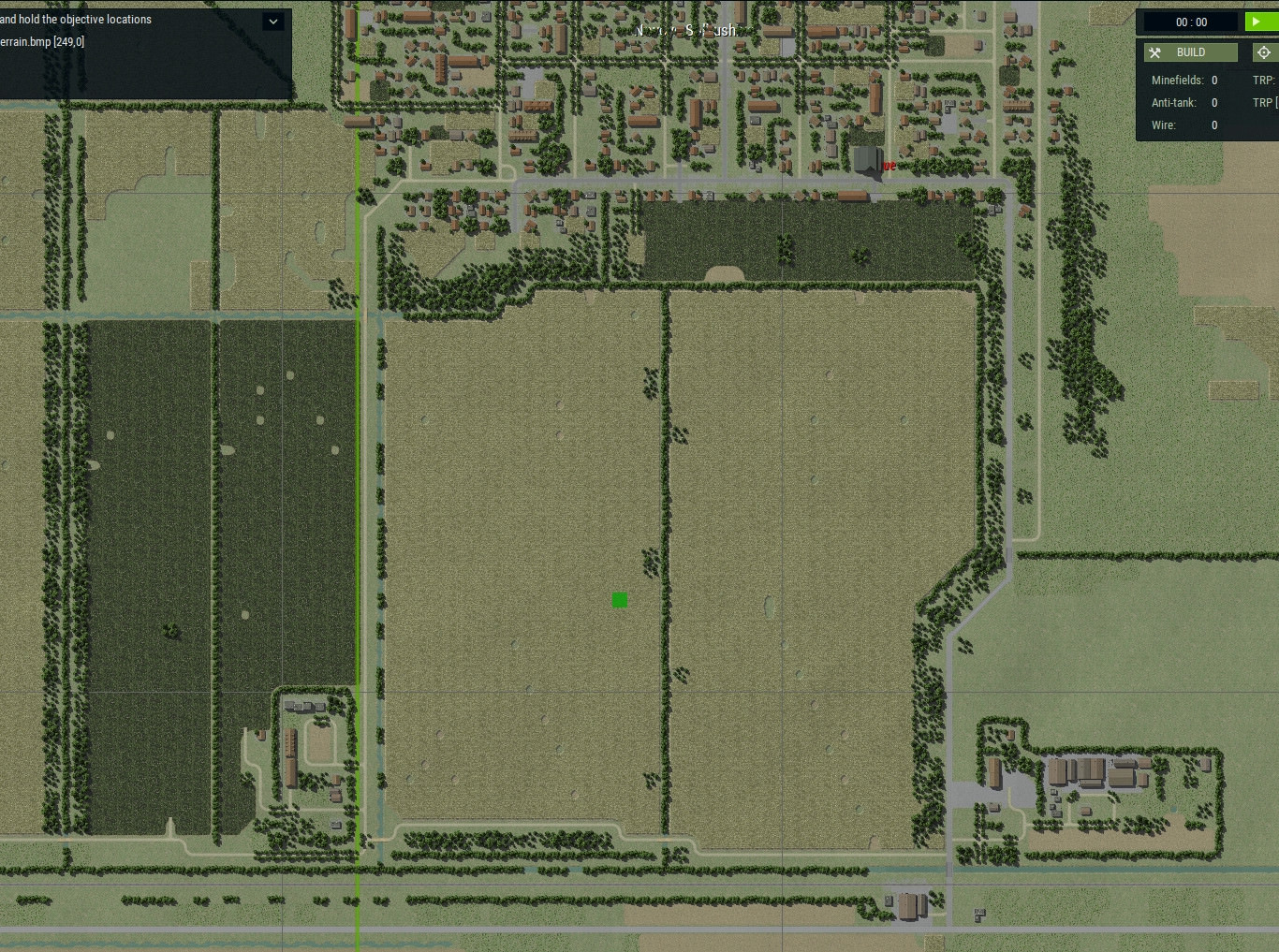