I should not have begun to do this thing in the first place. I have done graphics for years and it seemed a very easy task to "tweak" these tiles in order to make a flat looking (board game like) mod of the map, much less sophisticated, in appearance, then the look of works I have done before. How wrong can one be?

This was hell. To adjust those tiles to fit one another on the borders, to produce an organic look on patterns that will repeat themselves multiple times, to make fit all kind of terrain combinations in the same hex keeping the necessary clearness etc. F...k, this was painful and I wouldn't finish the job wasn't it for the obsession that pops up after I have accepted a challenge.

My inspiration was Devil's Cauldron board game. In fact, two tiles (dense urban and cultivated terrain) were directly derived from this game, with some changes. Since there will be no commercial use here, I don't think it is a problem. Anyway, this could be easily changed, I just don't see the need.

The goal was to get as close to a board game look as possible. I have used some 3D look with shadows for objects that aren't part of the map to enhance the effect. All tiles have a drawing like look. This is the only way to get the desired effect, since if we use realistic looking terrain, the only way to make them look as if printed would be to use perspective (in which case we can tell the image is flat) or to have a whole screen graphic layer on top of the board so that lighting conditions and reflexes could reproduce the aspect of a flat cardboard. As it is, Toaw only allow individual hexes adjusts that will reproduce themselves in a brick like pattern. We can't have different lighting conditions in different parts of the board as we can't have reflexes covering the whole of the board.

I have created a quick draft of a website using a hosting service I have never used before, just to host the example images and the link, so if there is some issue with the site or the link, just report it.

Some suggestions to the development team, to enhance the look of graphics:

- The instantaneous update of the movement arrow is very annoying; visually unpleasant and distracting. A simple solution (it must be very easy to implement) would be to allow for a half second, or so, delay after entering an hex, so that it doesn't snake around after the cursor in a kite tail fashion. A better solution would be to display the arrow after a first right click and the moving option menu on a second right click. The cursor change already shows if the hex is electable for movement. This would, additionally, prevent the accidental move problem.

- Adjust the mask that clips the text below the counters. As it is, the illusion of printed text is defeated by the text partially displaying above the counter's borders.

- Allow changing the objective flags mask. It seems to be set programatically (at least, I wasn't able to find a mask for it). Since objectives are useful when kept visible, making them look as a physical game piece set upon the board for a specific scenario would enhance the board like aspect. Ok, this suggestion is serving my personal goal, but even other mods would benefit from this freedom. I have tried to offset the font in order to use the square mask where it is, but the same font is used for all zoom levels, which makes it drift around when zooming if it isn't centered.

I hope you guys like it. I think it would be nice to have a sound set more appropriate for board games, with things like dices, perhaps some sound of pieces on cardboard when moving and so on, but I just don't have the time for it now. And I don't want to go obsessive again.

That's a beautiful map style. I especially like the broken rail and fortifications graphics. It's a very clean look. Thanks for doing this!

This looks fantastic! Downloading right now and will try it tonight - thanks so much for your work (and sorry to hear that it was such a painful one ...)
Top

Looks great! But -
EDIT: Nevermind - it works fine, just I needed to update my 7z packer plugin in Total Commander [:'(]

I love the look of those movement arrows, with fancy transparency effects. Well done!

Some tips:
- Make it properly mod-foldered, so that it's easy to use with for instance JSGME. Create a folder with a better descriptive name, i.e. "Cabido Boardgame Style Mod Pack", then create "Graphics Override" inside it and put the files there. That way JSGME knows where to put them, and it's easier for others to avoid misunderstanding.

- It might be a good idea to separate out the movement arrows files (Movement_arrows.png) to a separate mod or option, since this is not really related to the map look.

- The same as above with other things not directly related to how the map looks, i.e. Arrowheads, Counters, Supply etc. These are really personal preference, let people pick and choose. Only the _tiles_ should be included in a map mod.

- Don't include files not changed from the default. For instance, have you changed flags.png or CounterUnits.png? EDIT: I see you have actually changed them - it's a nice effect, but not for everyone, so maybe create a separate mod for UI (not map look) stuff?

- Damaged road/rail bridges should stand out more. I use a separate 'overlay', with a red broken bridge icon to make it really stand out, in the same way as ports. I think it's from Silvain, see this thread: tm.asp?m=4473489 . It might look a bit "uglier" but it really helps gameplay considering how important broken bridges are.

- Don't "force" users to use your opart4 fonts file - fonts are a personal preference and quite a lot of work to fix if it gets overwritten.

- To avoid step 3 in the instructions, it should be possible to include the three files as empty transparent PNGs, in that way those will be used instead, to avoid the overlay showing.

OUW (Order of the Upgrade Wars)

There are folks out there with way too much time on their hands.
- Norm Koger
Top

Thanks for this mod. It's terrific!
War. War never changes.
Top

Wow
Must be the coolest map mod I ever seen.
you should post image of this map on there 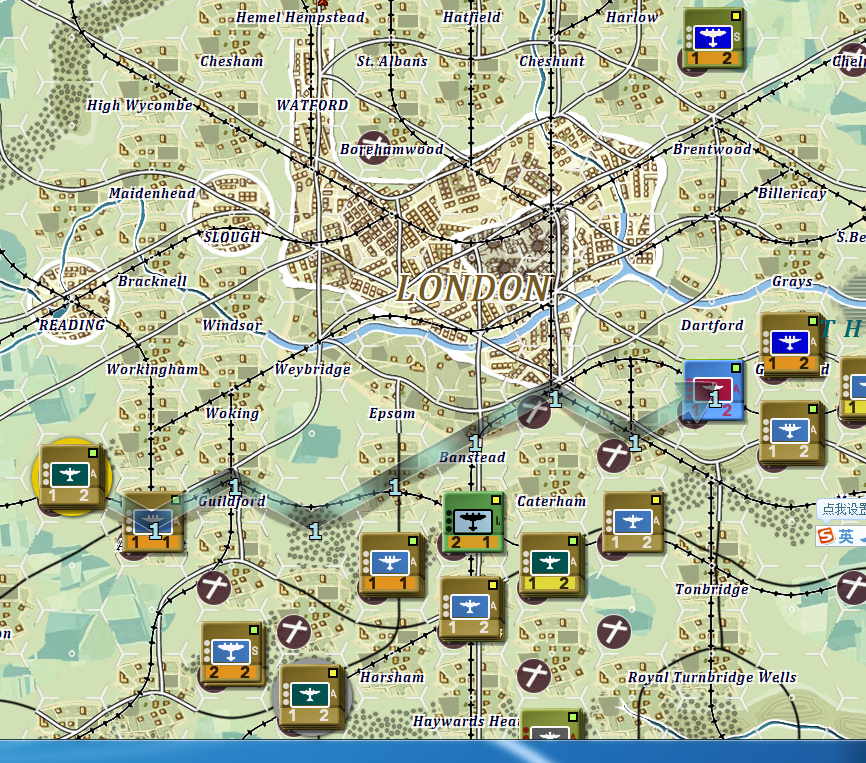 ....I said:"Isn't this letting the enemy catch us all in an action?We run away for ourselves,How can we worthily of our soldiers?Tell them run for themselves."
-Lieutenant General Du Yuming&#65292;Deputy Commander of Xuzhou Anti-Bandit HQ

Thanks for your comments. A lot of effort was put in it, so it's always good to have some feedback.

Shadrach, I don't use JSGME. I think most people here don't too. If it is just a question of adapting the folder structure so that the program can install it correctly, I could do it. Or, if you just send me it, so that I can upload it. One little thing however: I have done it as a pack, so that things like movement arrow and fonts are part of it and used to create the illusion of a flat board. I want people that aren't used to deal with mods to be able to install it as a whole and get the visuals presented in the site working instantly with ease. People that mix up different mods are used to TOAW's folder structure, so they will find it easy to just delete unwanted files or grab selected ones and place them in the right folders.

Anyway, I can provide both options: full pack and some other to be used with JSGME that can be installed more selectively.
Top

Nice job. There are certain elements I sure am gonna use to personalize my own map view even more
The TOAW Redux Dude
Top

I have uploaded another version with just a simple correction to the fonts file. I have inadvertently changed the wrong parameter on the status bar font, which caused one line of text to be displayed on top of the other. For those that have already installed the mod, just grab the new font file and substitute it. An easier way is to just to go into Play > Player Options > right arrow (bottom) > Edit Fonts > Status Bar Font and set Height Override to 0. EDIT: Press CTRL+R to redraw/refresh the map in order to see the change. Thanks to sPzAbt653 for this tip.
Top

You'll have to reinitialize the game.

It really works. Nice tip. It would have spared me some time when adjusting fonts.
Top

Thanks for this one: very nice to use
Top

Huge thanks for this Mod! I'm playing through the Campaign for North Africa, and this does an amazing job of making the dunes/badlands/rocky terrain much more visible.
Top

Thanks for your obsessiveness Cabido, I really love the look of this mod! Great work! [:)] Got it installed very easily and without any issues [;)]
"I say again, expend ALL remaining in my perimeter!" - Platoon

Wow ! Absolutely gorgeous ! Fantastic maps. Many thanks for your work.
Winner of the first edition of the Command: Modern Operations COMPLEX PBEM Tournament (April 2022)

Is this mod compatible with the Steam version? I just can't get it to work

Have looked at installation instructions several times but no luck.
Top

Is this mod compatible with the Steam version? I just can't get it to work

Have looked at installation instructions several times but no luck.