Hello again, I've managed to find another database issue. This is with the Chinese H/PJ-17 30mm single-barrel gun which seems to have mistakenly been given the stats of a CIWS weapon (%70 accuracy against aircraft/missiles and unable to attack land targets), instead of a it having stats equivalent to a typhoon (%4 accuracy against aircraft/missile, able to attack land targets). This is a rather annoying problem, as it significantly increases the amount of CIWS modern Chinese warships get making them unrealistically harder to hit with AShM's. Thank you for continuing to improve the game and I hope to see this issue fixed soon.

Hey there,
I request the addition of some sorts of fixed antenna structures to the facilities in the DB.
We currently have some coms buildings, like the Uplink relay station or the Radio/TV station, but there is only the "TV mast" when it comes to actual antennas.
Besides it took me long to eventually detect the TV mast at all while looking for a generic antenna facility, we could use some variety, especially if we keep in mind the size of such facilities.
So I suggest some generic antenna masts of different scale, so we have antennas for all kind of different frequencies and purposes.

Only a suggestion:
- VLF/LF/MF mast
- HF antenna
- VHF/UHF broadcast antenna
- VHF/UHF communications antenna
- satellite uplink
- aeronavigational transmitter (standing for VOR, TACAN, DME, NDB)
- telecommunications mast (interlinking or simply representing cell)
Since these all should represent fixed sites and no mobile antenna sets, they would have heights of some tens up to more than 250 meters. Respectively they require increasing areas on the ground.

alternatively:
As long as there are no actual generic emissions implemented in CMANO to be picked up by SIGINT sensors, we probably could as well work with a simple system of some "generic antenna mast", offering some incremental sizes of let's say 10 meters, 25 meters, 100 meters, 250 meters and higher...
Top

Please add to the arsenal of MiG-29 SMT and Su-30 SM rocket P-77-1, there are photos of these aircraft launchers AKU-170 in the Russian Air Force, and add to pr. 636 Varshavyanka 2 not launch device 3m14 and 3m54 missiles and launching devices 4.
Sorry for my English)

ORIGINAL: JamitovHymem
There seems to be something wrong with the J-10C in the database
The image belongs to Su30MKK2
And everything else are exactly the same as J-10B including sensors and weapons


I think it's just a new unannounced unit in SP1, definitely worth to search info about it for adjustment. As for picture, report issue here:
tm.asp?m=3441939

I think it's because PLA never disclose what exactly the caliber of Z-10 gun using at all, as well as the thin barrel make observers harder to believe it's 23mm, or anything larger than 12.7mm.

Anyone need a ruler for this picture? 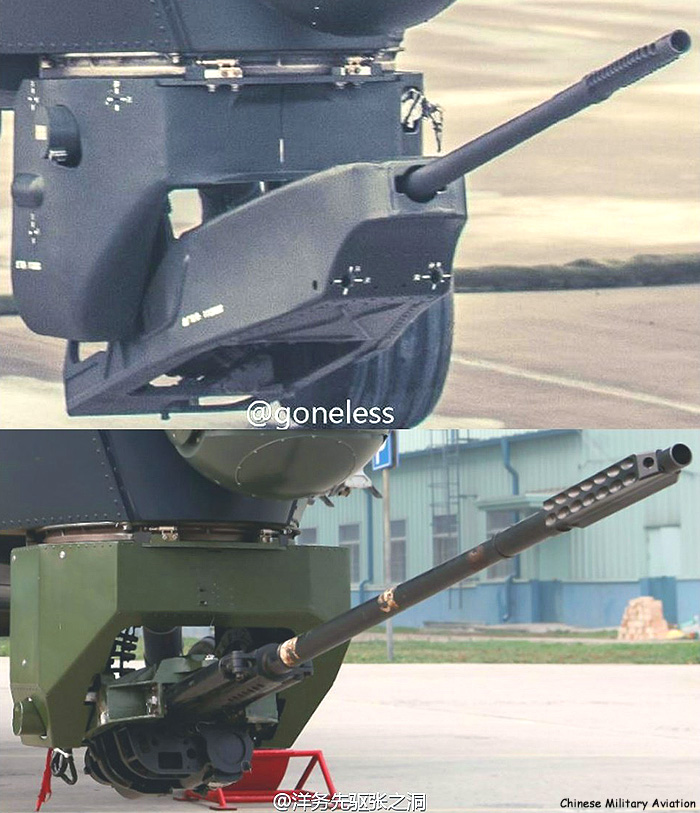 As for Z-19, the pylon it used does shown in CCTV before: 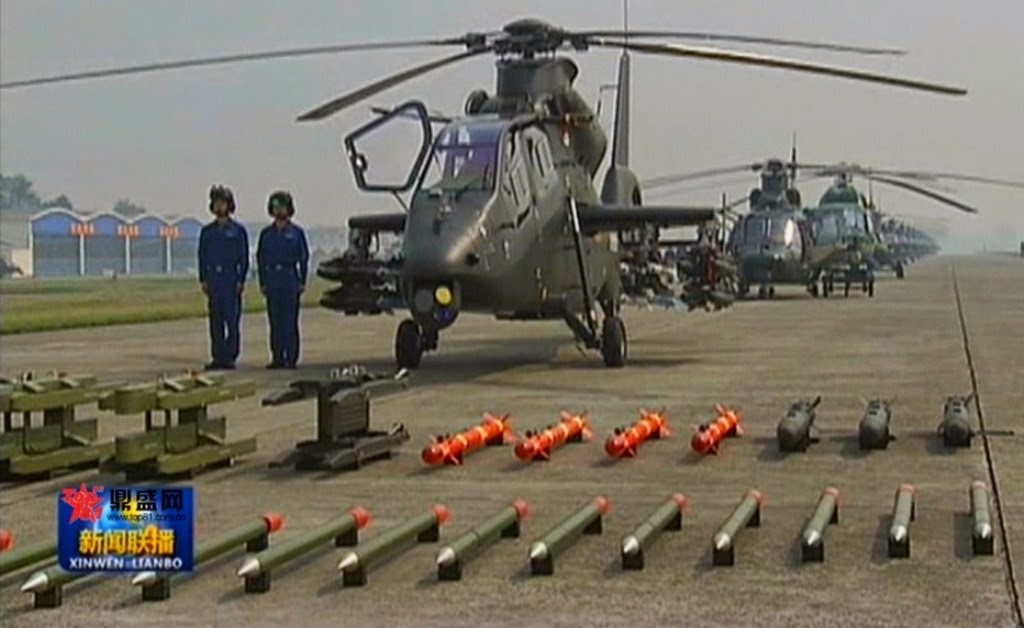 It's very familiar to this, which is confirmed to mount TY-90:

However, none of a Z-19 being photographed with TY-90, even with this pylon installed. And it does have some doubts of Z-19 capable to use it or not.

Although the older Z-9W (attack helicopter version of Z-9) was shown TY-90 being loaded, it never been seen again afterward for many years.
Top

youtube.co m/watch?v=U4hjLLAunfk
But in the news it says 30mm
and later it also mentions that they both have the ability to use the TY-90
Top

youtube.co m/watch?v=U4hjLLAunfk
But in the news it says 30mm
and later it also mentions that they both have the ability to use the TY-90

Well, I found what you've mentioned:

Second row, (capable to use) Helicopter-specific AAM (refer to TY-90).

CCTV/CNTV is definitely the state-running news, but also quite common that quoting wrong military sources, pictures and specifications. Still, it's only the source that is came from the governmental mouthpiece.

How contradicting, isn't it?

Now, what we need to search for is pictures, I mean the photography-quality pictures, of Z-19 with TY-90, and a single cartridge of Z-10 30mm shell, then it will be convincing for devs.
Top

In addition to the names, there seem to be some errors on the sensors of the two Petr Velikiy
The sensors on the 2019 version are newer than the ones on the 2023 refit version

ORIGINAL: Excroat3
Quick question, will the new version of the DB be released along with 11.5? Also, is there a general timeframe on the release of 11.5? Just wondering if I should wait for the new units to come out in the new DB or if I should just use placeholders for the time being in my scenario.

I heard that laser mechanics were going to improved/changed, is this still planned?


It is. If you have a specific mechanics addition/improvement to suggest, please use the dedicated thread for this.
Facebook
Twitter

A bit vague as there are (obviously) no exact numbers available, but public statements by the USAF suggest that the F-35's RCS is lower than the F-22's (at least from some aspects):

Hostage caused a stir in late spring when, in press interviews, he said the F-35 would be stealthier than the F-22, its larger USAF stablemate. Conventional wisdom had pegged the F-22, with its angled, vectored-thrust engines, as a stealthier machine than the F-35. Hostage also said the F-35 would be unbeatable when employed in numbers, which is why the full buy of aircraft is "so critical."

"I would say that General Hostage … is accurate in his statement about the simple stealthiness of the F-35 [with regard] to other airplanes," Bogdan said in the interview. The statement was accurate for radar cross section, as measured in decibels, and range of detectability, he said, and he scoffed at the notion that anyone can tell how stealthy an aircraft is just by looking at it.

ORIGINAL: Breaking Defense, General Mike Hostage
The F-35’s cross section is much smaller than the F-22’s, but that does not mean, Hostage concedes, that the F-35 is necessarily superior to the F-22 when we go to war.


I recognize that these aren't exactly exact numbers, but I thought it could be worth tweaking their RCS to reflect these statements. It's up to the devs in the end, of course, as it's not my game

The U.S. Air Force, in it's effort to get money to build more F-22s, has revealed just how "stealthy" the F-22 is. It's RCS (Radar Cross Section) is the equivalent, for a radar, to a metal marble. The less stealthy (and much cheaper) F-35, is equal to a metal golf ball. The F-35 stealthiness is a bit better than the B-2 bomber, which, in turn, was twice as good as that on the even older F-117. Much older aircraft, like the B-52, have a huge RCS, which makes them very easy to spot on radar. But with a smaller RCS, it's more likely that the aircraft won't be detected at all.

The air force revealed this information, which is usually kept secret, because it wants to make the case that it makes more sense to cut production of the F-35 (which cost $30-50 million each), so that more F-22s (that cost over $100 million each) can be bought. Most of the air force generals are former fighter pilots, and the F-22 is a much hotter fighter than the F-35 (which is basically a fighter-bomber, with emphasis on the latter function.) This is causing an international uproar, because of the many foreign countries that are buying the F-35. Some of these countries have contributed money for the development of the F-35. The F-22 will not be exported, because it uses so much top secret technology.

I'm trying to add the submunitions variant of the SS-26 Stone [9M723 Iskander-M] (DBID #567) to an Iskander battalion, however the missile does not show up in the "Add Weapon Record" and "Add Weapon Mount" tabs. Not sure what'S going on. Am I missing something?

Btw, the submunitions variant of the 9M723 Iskander-M is labeled with a 2010 side note in the DB viewer. Mind adding those to both, 2010/DBID #254 and 2012/DBID #2556 versions of the Iskander battalions in the Russian DB section? Already got a use for those.

Honestly, thanks for the ongoing support of this amazing sim! [:)]


ORIGINAL: AOPA
During a flight debriefing, Col. Chris Niemi and Maj. Nash Vickers both said a comparison of the radar-absorbing F-35 to its nimble but less stealthy twin-engine F-22 cousin might not reveal the whole story.

Niemi has eight years in the cockpit of an F-22 and is one of the few Air Force pilots who is qualified in both the Raptor and the F-35 Lightning II. He said he wanted to set the record straight on the Lightning II, once and for all. “Many have compared the F-22 to the F-35 but that comparison is unfair. With the F-35 Lightning, this fighter sees better, has more range, and is stealthier than any of its predecessors. This airplane, with its fly by wire technology, is super easy to fly and it has a very linear response.”


APA's physical optics approach is... well, I'm not going to suggest it's quite as bad as a random number generator, but it's not far from it.

I think they should be able to carry the RB 99 not just the Meteor.
Sweden also have bought a small number of AIM-120C-5 missiles, is it possible to add a loadout with these?

Etendard IVP #67 seems like it is missing its internal recon loadout.

It is a recon plane with no loadout other then Tanker loadout, i am almost 100 % it can be used as a tanker so no error there just rather the lack of the recon one.
Top

Return to “Mods and Scenarios”