Gamers can also use this forum to chat about any game related subject, news, rumours etc.

Yes, this could very well be an exiting time for Wargames.

[center]links you to the thread with all the NEWS released to date.[/center]

Thanks y'all for reading this

Major Mess
Click below. You know you want to!! 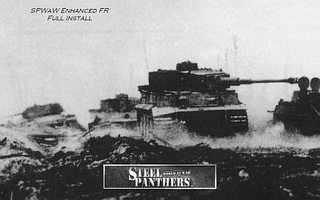 He has some important points [X(], are we going to get a response from Matrix / Slitherine?

Patrick
Please come and join and befriend me at the great Steam portal! There are quite a few Matrix/Slitherine players on Steam! My member page: http://steamcommunity.com/profiles/76561197988402427
Top

It's not just me that thinks this way ...


From The Very Astute rwenstrup
"There are some things that define the culture of an organization. The original Steel Panthers give away made Matrix. I have bought games intentionally from Matrix for many years as a result of this."


Another Basic truth from rwenstrup
"It is VERY much in Matrix's interest to continue to support this game..."


Of course they'll do something. A Multi-National Company, actively striving to become the paradigm of their Industry, they wouldn't miss a Golden Opportunity such as this. I would Imagine that their "Culture" would demand action.
Wouldn't You?

Old School Marketing Philosophy from rwenstrup that is still Valid. Ignore at your own Risk Matrix / Slitherene
"it is a source of considerable customer goodwill...something that people pay a lot to get..."


I've placed in Italics the bits that Matrix / Slitherene should probably focus on. The word in Red is for the Marketing & Sales people to stare at.

It's a failing of mine, I know. But I'm patient to a fault.
I'm still willing to give Matrix / Slitherene time for a reasonable response. I'm not quite ready yet to start another Effort-post to connect all the dots for these guys.


What do you say? .... Time for a little Common Sense to filter down to the End Users??

edit - spelling again ... sigh
Click below. You know you want to!!

I've explained the basic reasoning in the other thread but its not as simple as it sounds or obviously we would have done it a long time ago. I can't really say any more for now

Thanks Iain, please keep us informed, this is such a terrific game with such a large following!

Patrick
Please come and join and befriend me at the great Steam portal! There are quite a few Matrix/Slitherine players on Steam! My member page: http://steamcommunity.com/profiles/76561197988402427
Top

What comes to creating new installer by Matrix staff, which includes mods and the likes, there could be some legal mumbojumbo which would require something more than forum/e-mail exchange between Matrix, Slitherine, and modders. Now I'm shooting indirect fire without observer, but do I hit on the target?
You know what they say, don't you? About how us MechWarriors are the modern knights, how warfare has become civilized now that we have to abide by conventions and rules of war. Don't believe it.

What comes to creating new installer by Matrix staff, which includes mods and the likes, there could be some legal mumbojumbo which would require something more than forum/e-mail exchange between Matrix, Slitherine, and modders. Now I'm shooting indirect fire without observer, but do I hit on the target?


Matti, I share your frustration [:@] but these things can be complicated and take time to iron out. I'm sure Matrix would like to take care of this as soon as possible. But, we need to keep the pressure on, I think the future will be bright!

Please come and join and befriend me at the great Steam portal! There are quite a few Matrix/Slitherine players on Steam! My member page: http://steamcommunity.com/profiles/76561197988402427
Top

I'm still trying to understand how Matrix/Slitherine let Paradox get the rights to "Squad Leader"? Surely you're not that far behind them in revenue and capital?
Top


ORIGINAL: Iain McNeil
I've explained the basic reasoning in the other thread but its not as simple as it sounds

With all due respect Sir, I disagree.


ORIGINAL: Iain McNeil
or obviously we would have done it a long time ago.


Ummmmm, how could you have done that? Win 8 only came out a year or so ago.

Major Mess
Click below. You know you want to!!

In about 2002 a fellow wargamer put me onto Steel Panthers. There was a version free to download.

It is a wargame I expected to enjoy. It was about 12 years ago so I don't remember why.

I was one of the people that actually MADE Matrix Games happen back in 2000.

Yes we wargamers blathering away all day long for so long about only one game, sure DID make a difference.

How much do I want Steel Panthers? You could have every last friggin wargame I own in trade if I could have Steel Panthers, as an easy install, with my Mega Campaigns and a mouse aggro that simply didn't exist and no wonky graphics issues, and not requiring more geek skills than the lad that maintains my computer realm for me. Because I sure don't do it. I'm good at making things, but computers isn't on that list.

I know, and everyone that cares knows, that the ownership of Steel Panthers is a problem. Frankly I say this to the owner of the code, you suck. Just give it up and sell it finally. Or work some deal. Even Hasborg is ok with letting MMP market ASL for them.

Gary can cram him monstrosity titles and their obsession with too much and too complex to be remotely realistic use of good game time. I wish he'd make a Steel Panther's successor instead. My money spent on War in the Pacific, and War in the East was the same as a drunk spending money on booze. I never should have bought them. Gary, those games don't cut it even by a fraction in comparison. They don't impress me, and any awards you have gotten for them, I couldn't care less. I want the title that you have been repeatedly told we want. If not rebuilt old code, then do it fresh. You did it the first time, and you obviously have the time, as you keep churning out those monstrosities. When I think Gary Grigsby, I don't think of other designs eh. You're the Steel Panthers guy. I was stupid to buy the WitE expansions and with some luck, I am refusing to buy the WitW game. I don't want it. I don't want a title that blends them either.

Nope there isn't a REAL justification for not republishing Steel Panthers. You simply tell the people making other games, to stop making them and make what everyone is clamouring for. I don't need yet another operational grand strategy done to death title from yet another developer that thinks they can redo the done to death and magically make it worth it.

If everyone told Ford to make car A, and he went and made car B C and D that had already been done to death by GM, well I'd feel the same way about them saying they could do it.
I have too many too complicated wargames, and not enough sufficiently interested non wargamer friends.
Top

I would think part of the question is what makes financial sense?

I'm an old Avalon Hill started war game enthusiast. There is no doubt on the basic level I am with you and want to see many classic war games. Not first person shooters, not Real Time, not fantasy, not fancy graphics without a good game behind them, not unrealistic play pretending to be a strategy war game, etc.

I use to be able to buy good AH & other board games at hobby stores and others. When I switched to computer games I could find them in many software stores. Now all I can find is a very small collection of poor PC games if any at all and a lot of playstation, x-box etc. with very few that would interest me. Most of the "software stores" are done and you can't even find a good collection at Best Buy.

Now I have to buy almost entirely on-line and even that is becoming more of a problem. Perhaps we are just too small of a market for a company to want to focus on. Perhaps they don't see enough profit potential. Many if not most of those reading this thread will buy from and support a company that provides us with the proper type and quality of game. Are there enough of us? The state of pc gaming tends to suggest that many companies don't think so.
Hooked Since AH Gettysburg
Top

It's my understanding that Steel Panthers World at War works flawlessly on Windows 8 or 8.1 apart from the bug on the artillery screen for which there is a workaround.

asking a 100 times won't get you a better answer if they don't have the info to give you, or you don't like the last answer given

ps edited, this isn't meant as a reply to shunwick either, and i'm sorry i replied to this post and made it look like it was when it wasn't

i have slapped myself silly for 10 mins as punishment and hope you except my apology [;)]

I guess that I will install it and find out then....

... and I only remember asking the question once...

thanks, will look more next time and make sure i type what i mean and to whom the reply is to

The fact of the matter is that Gary Grisby has plans to make a successor to SPWAW. Its just that the scheduling of it seems to indicate that it will happen 7-10 years down the road. This is the big disappointment. Would it be as enjoyable as SpWAW? Up to this point IMO, nothing has equaled it.
Top
Post Reply
39 posts