Commander - The Great War is the latest release in the popular and playable Commander series of historical strategy games. Gamers will enjoy a huge hex based campaign map that stretches from the USA in the west, Africa and Arabia to the south, Scandinavia to the north and the Urals to the east on a new engine that is more efficient and fully supports widescreen resolutions.
Commander – The Great War features a Grand Campaign covering the whole of World War I from the invasion of Belgium on August 5, 1914 to the Armistice on the 11th of November 1918 in addition to 16 different unit types including Infantry, Cavalry, Armoured Cars and Tanks, Artillery, Railroad Guns and Armoured Trains and more!

RE: Commander the Great War: POTZBLITZ MOD is now V4.8

I'll one thing: You are one dedicated Son of a Gun who has struggled to get this MOD done.[;)]
and one flew over the Cuckoos nest
Top

Almost three years later, "PotzBlitz" mod has reached version number 10.3 and I think there's not much left to add or edit as it's already filled to the brim with new features. 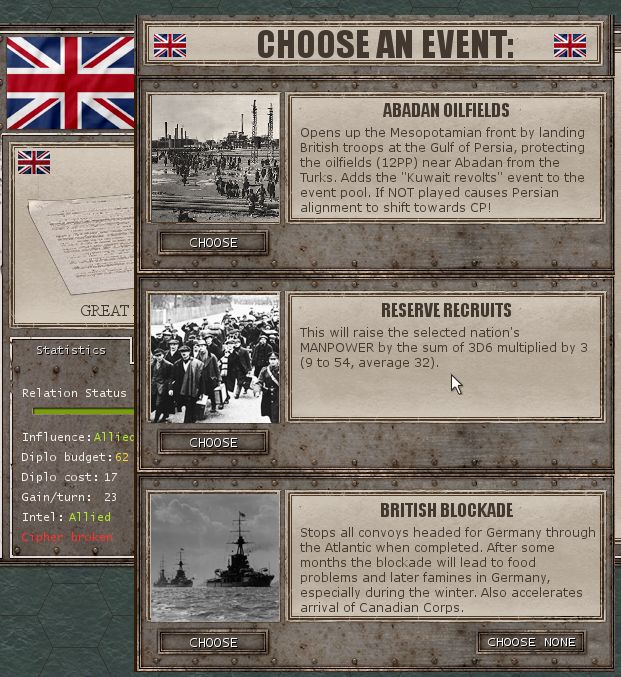 So, if you are/were a fan of Commander the Great War and have not already tried out my mod, I'd suggest you give it a go. It's easy to install too and comes with a 120 page PDF manual.

Find it here at Slitherine forum:

Awesome work! Just coming off SC WW1, eager to see your changes, plus with the added realism of oil and manpower, something the SC series has always strangely left out.


Besides the usual plethora of bugfixes and tweaking here are some of the new changes(forgot to make a proper list so this is from memory but there is plenty more):

- raised submarine cost from 15 to 20 but to compensate also raised German submarine unit build limit from 2 to 3 times the number of researched submarine techs
- all other "modern" units (tanks, armored trains, fighters, bombers, zeppelins) build limit increased by +1
- raised artillery cost from 30 to 40
- new Russian fortress port of Libau in Latvia
- news events: Italian Speedboat Raid, Churchill goes to the Trenches, Italo-Austrian Border Tension
- Q-Ships are now a bit more scary for CP
- reduced attack bonus from researching "additional torpedo tubes" by 1, added that attack +1 bonus to the following "submarine cruisers" tech
- fixed a bug that may have lowered British Supply level twice when CP capture the Suez canal
- same for when CP capture Abadan or India revolts
- modified the "For the fatherland" event which was using up 1D6 German manpower per attack for +50% experience before, making it quite wasteful: reduced that to 0-2 manpower per attack for +20% experience
- "Bloodbath at Langemarck" now works as designed, was prevented from triggering correctly because of some internal value getting messed up
- reduced combat stats for German commander Herman von Francois a bit
- fixed a bug concerning British naval raids on German-occupied Franco-Belgian port cities
- fixed too early trigger for British AI's "British Pal's Battalions" event
- "Stockpile ammunition" event no longer unlocks next artillery tech, instead 2 ammo factories are added
- new generals: Charles Mangin (France), Otto von Below (Germany)
- major update of the PDF manual

So, if you own CTGW and are ready to give the game a new whirl, you are really missing out without this mod.
Enjoy!
Commander the Great War: Director's Cut
PotzBlitz Mod:
http://www.slitherine.com/forum/viewtop ... 18&t=77884
Top

Hello, thanks for the announcement. I have 12.4 installed, is there an update option or do i download the complete mod and install over the top?
Enjoy when you can, and endure when you must. ~Johann Wolfgang von Goethe

"Be Yourself; Everyone else is already taken" ~Oscar Wilde

*I'm in the Wargamer middle ground*
I don't buy all the wargames I want, I just buy more than I need.

Re: Commander the Great War: POTZBLITZ MOD is now V15.1

I've completed V15 of my mod, get it here (click on the download button at the top right):

Again, I did not maintain a list of all the stuff edited over the last few months, so here's what I remember right now, there's much, MUCH more though in this version which you will probably discover once you try it out:

This will be the final version of my mod. I might release the Russian Civil War as a separate stand-alone scenario in the future.

Return to “Commander - The Great War”